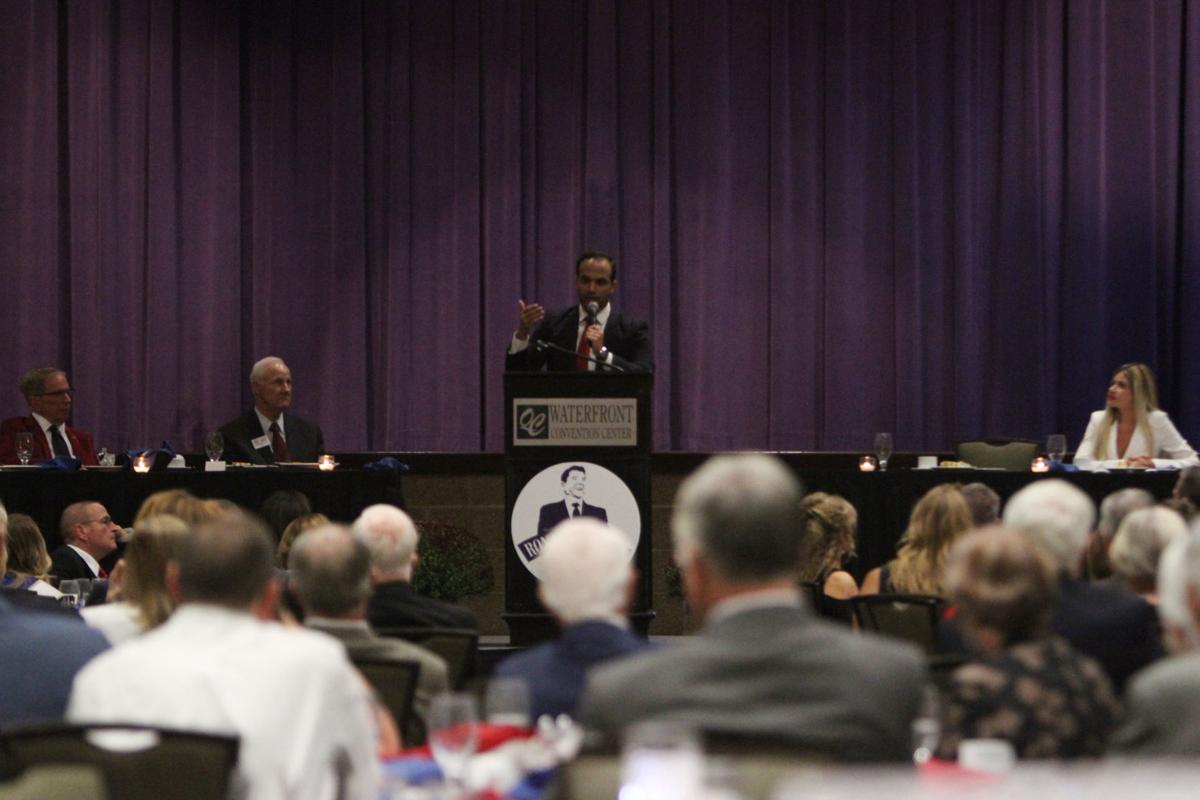 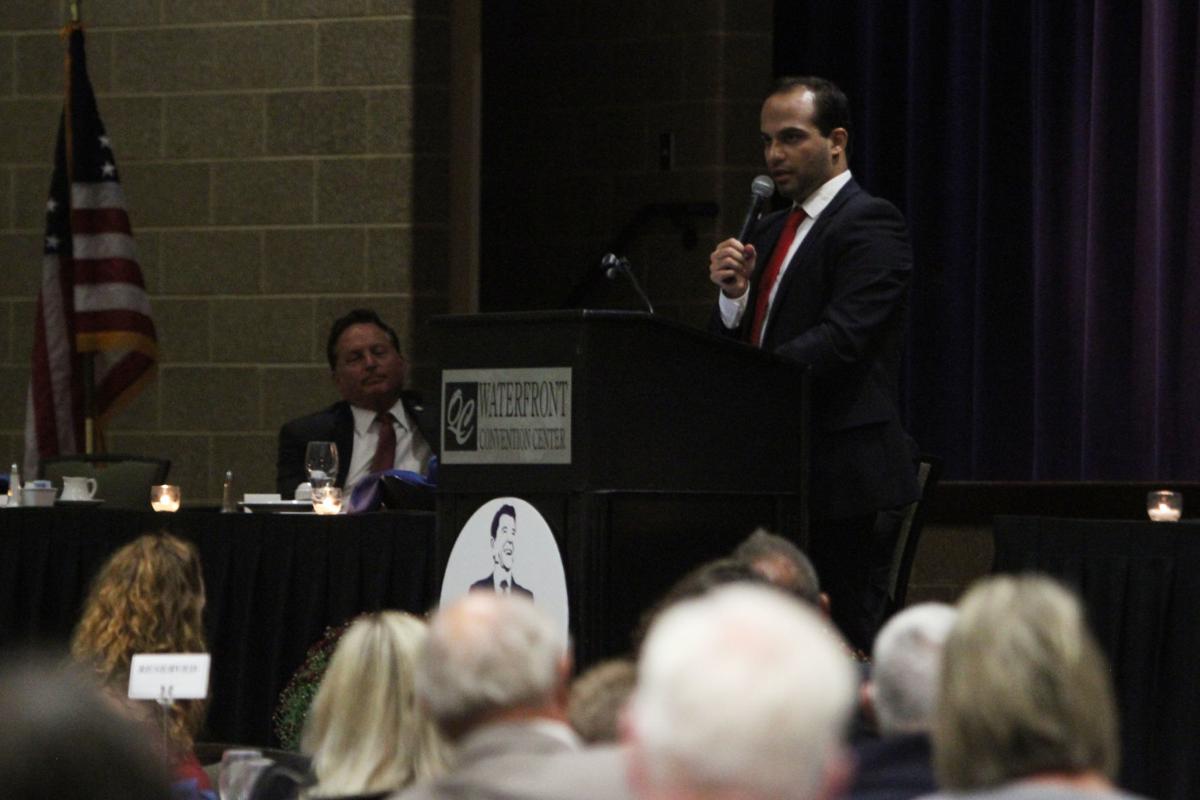 “The coup d’etat effort, and that’s not a euphemism, to undermine the Trump presidency has not stopped,” Papadopoulos said during a fundraiser dinner Tuesday night. “The Russia hoax … has now evolved into Ukraine-gate, and its ramifications will be felt both domestically and abroad.”

Papadopoulos also blamed a news media that “peddles fake news about the president attempting a quid-pro-quo,” contending the impeachment effort in the House will fail because nearly two dozen Republican senators would have to sign on to “support this nonsense.”

“I see this backfiring on the Democrats, and I believe they have opened Pandora’s box,” he added.

Papadopoulos argued more attention should be paid to former Vice President Joe Biden’s diplomatic relations overseas with Ukranian leaders and forwarded theories about the Obama investigating Trump during his presidential campaign, calling that unprecedented and “treasonous.”

“This Ukraine story is a red herring to keep the attention away from these investigations, the ones that really matter,” he said.

Trump has come under fire for speaking with Ukraine's president about allegedly leveraging foreign aid for investigating Biden, a leading 2020 candidate. Regardless of whether a quid-pro-quo took place, some have cited concerns with the president using his position to seek aid from a foreign power to investigate a political rival.

Papadopoulos was the featured guest speaker of the 11th Annual Scott County Republican Party Ronald Reagan Dinner, which has over the years become a must-go for GOP candidates, officeholders and party loyalists. Gov. Kim Reynolds was the featured speaker last year as she sought election to the state’s top executive post for the first time against Democratic challenger Fred Hubbell. Hundreds attended the semi-formal event this year.

Papadopoulos said Tuesday was a first to Iowa for him and his wife Simona Mangiante. He joked that she’s Italian — not Russian — and described her as his “rock” amid the Mueller investigation that thrust him into the national spotlight.

Papadopoulos was sentenced to spend two weeks in a minimum-security federal prison last year after he pleaded guilty to lying to the FBI about his contacts with Russian government officials. The federal inquiry centered on whether Papadopoulos conspired with Russians on behalf of the Trump campaign to spread emails damaging to Democrat Hillary Clinton’s candidacy.

Since his brief stint behind bars, Papadopoulos authored a memoir called “Deep State Target: How I Got Caught in the Crosshairs of the Plot to Bring Down President Trump”

In the book, Papadopoulos contradicts his guilty plea and the remorseful statements he made during his sentencing hearing last year, saying he never actually lied to the FBI but buckled under intense pressure amid a conspiracy led by U.S. and allied intelligence to destroy Trump’s political image.

The Tuesday night fundraiser, held in Bettendorf’s Waterfront Convention Center, included a celebration of all things Trump. A cardboard cutout of the president greeted event-goers at the doorway leading into the dining room, where dinner and drinks were served. A anti-impeachment petition was circulated during the evening that was apparently intended to be sent to House Speaker Nancy Pelosi’s house.

The annual fundraiser dinner featured a silent auction that included Trump swag. Also up for bid were dozens of gift baskets — including one “Mustache Basket” featuring male grooming products — a state flag flown over the Iowa Capitol and a watercolor painting view from the East Lawn of the White House. A signed copy of Papadopoulos’ book was also available.

Some other topics discussed were anti-abortion rights ideology, building a wall along the U.S.-Mexico border and helping reelection-seeking Republicans — including Trump — retain their D.C. offices and gain more representation in Congress.

After nearly four months of emergency steps to manage the spread of new coronavirus infections, COVID-19 cases in Iowa are on the rise again —…

SPRINGFIELD — An order last week by a downstate judge nullifying each of the COVID-19-related executive orders issued by Gov. JB Pritkzer the …

WHAT WE KNOW: In April, trustees approved a fiscal 2021 budget that takes $100,000 out of the village's $1 million general fund reserves and d…

One million Iowa households have responded to the 2020 U.S. census, making Iowa one of the states with the highest self-response rates.

WHAT WE KNOW: The Relay For Life was postponed from its original date of June 27 because of the COVID-19 pandemic.

Mayor Matson says Davenport has much to be proud of.

Residents of Davenport have much to be proud of and look forward to, Mayor Mike Matson said Tuesday in his state of the city address.