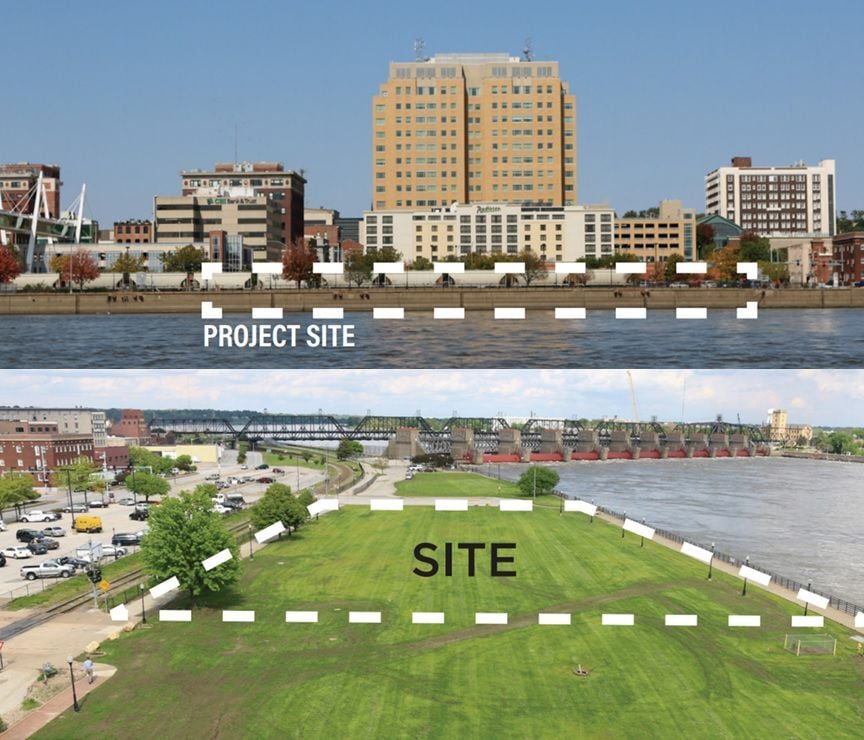 Imagines from the Mississippi River, top, and from the Davenport Skybridge, bottom, show the proposed development site for the Destination Play Area at Main Street Landing. 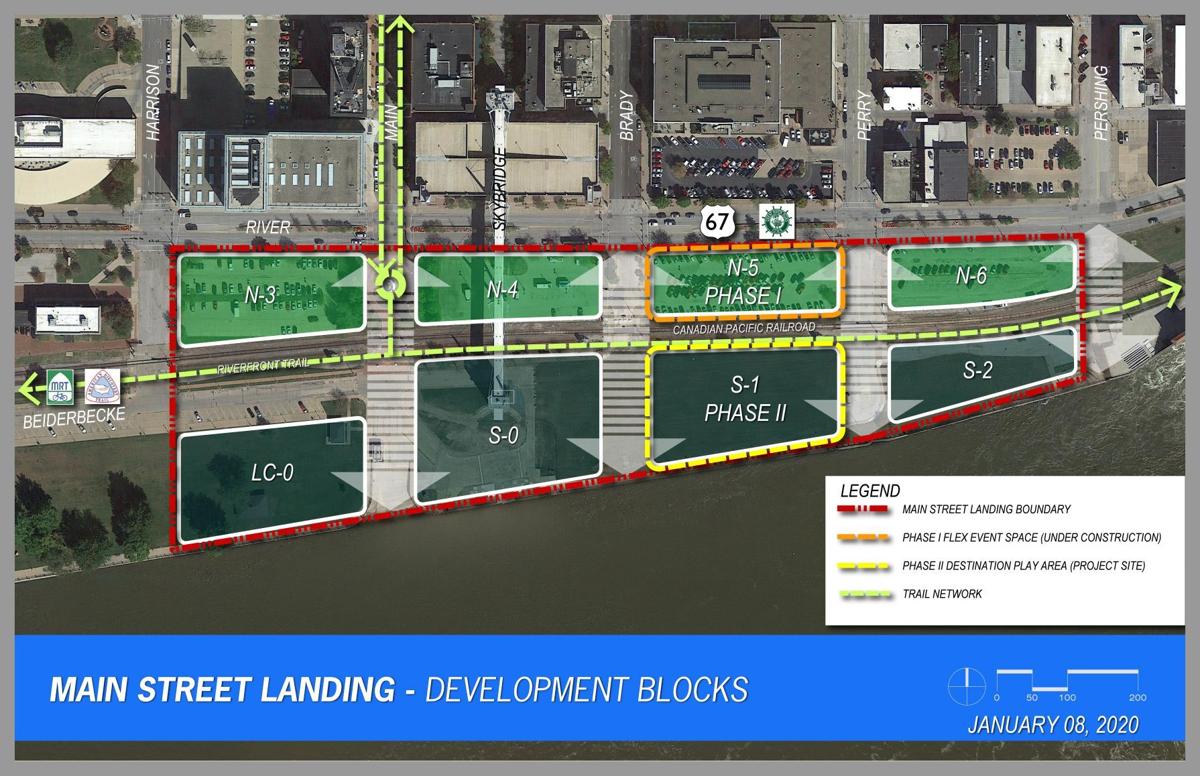 An aerial map shows the Main Street Landing area and the proposed site for the Destination Play Area. 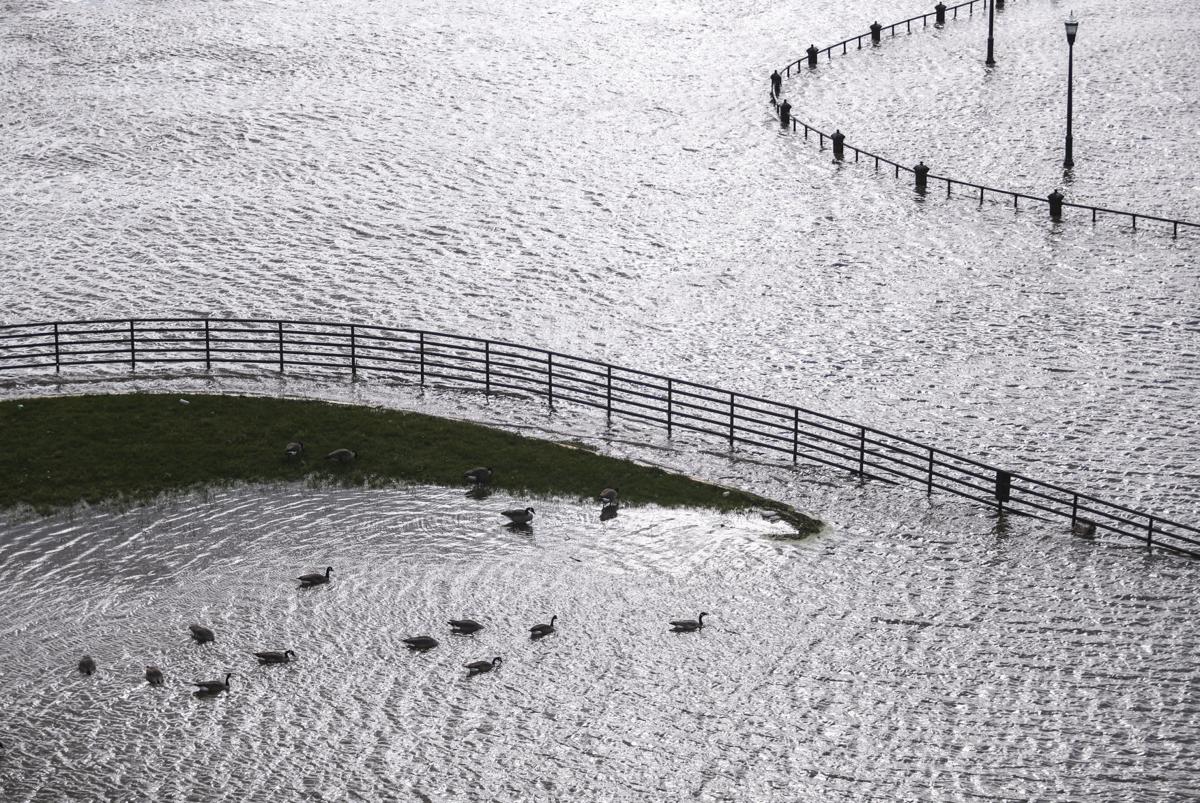 Davenport City Council members on Wednesday voted 9-1, with Alderman Ray Ambrose, Ward 4, opposed, to approve a spending plan for projects that would be funded by nearly $41 million the city will receive from the federal government as part of the $1.9 trillion American Rescue Plan. 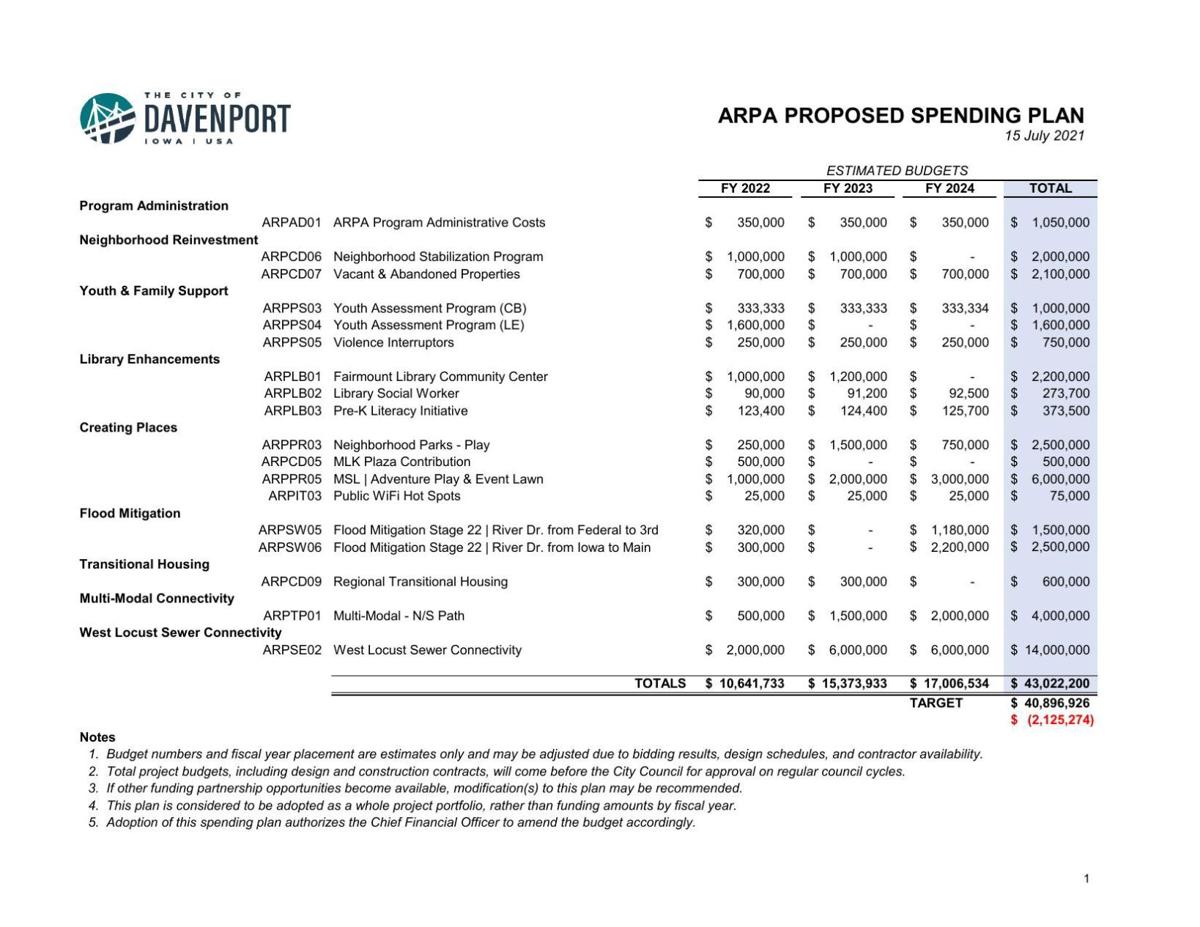 The vote came after aldermen discussed at length whether a portion should be used to advance a long-planned "regional destination play area" along the riverfront, while soon-to-be displaced renters complain of an inability to find affordable housing in the city.

In the end, a motion made by Alderman Ben Jobgen, Ward 6, to remove and table for future discussion $6 million to design and build an outdoor "Adventure Play & Event Lawn" included in city plans for the Main Street Landing project failed 6-4. Jobgen, Ambrose and aldermen Judith Lee, Ward 8, and Joseph Miller, Ward 7, voted in favor.

While supportive of the rest of the plan, Jobgen argued the project fails to align eligibility criteria established and intended use of the federal dollars. The criteria states the money be invested in projects that: respond to the public health emergency or its negative economic impacts to residents, businesses and impacted industries; compensate for revenue reductions due to COVID-19; or support infrastructure projects related to water, sewer, or broadband.

Jobgen and Lee were also wary of spending money to develop a flood-prone area ahead of a final report and recommendations expected this fall from a city-hired consulting firm assessing of how best to protect Davenport's riverfront from flooding.

Rock Island and Davenport residents, too, urged alderman during the meeting to reconsider, and lamented the lack of assistance for low- and moderate-income renters who struggle to find safe, decent, affordable renting housing in Davenport.

Andrew DeVieis, a Rock Island resident who said he moved from Davenport because he could not afford the cost of housing, called the use of recovery funds for a riverfront destination play area "completely tone deaf."

DeVieis also called the $600,000 included the plan for regional transitional housing "a slap in the face" to the potentially thousands of local renters at risk of being thrown out of their homes in the coming weeks.

A federal ban on evictions is poised to expire on July 31.

"So what is being done to help them?" Devieis asked aldermen. "This is an emergency, and I haven’t seen anything from this plan … about how to fix this."

A consortium of for-profit and nonprofit housing service provides, lenders and developers across the Quad-Cities has identified a gap of 6,645 affordable units for extremely low-income households earning 30% or less of area median income, or no more than $21,810 annually.

Mayor Mike Matson and Alderman Rick Dunn, Ward 1, argued using the federal dollars for riverfront development as well as seed funding for a youth-crime prevention program will free up money already set aside in the city budget for those efforts to be put toward affordable housing and improved streets and alleys.

While money can be used for certain pieces of infrastructure, that does not include roads, city officials said, noting federal lawmakers are working on passage of a separate infrastructure bill that includes road and highway funding.

"This is a comprehensive, well-thought-out, well-inputted plan that not everyone got everything they wanted exactly," Matson said. "And we can help people with immediate needs and do these things; they’re not mutually exclusive.'

Aldermen, too, argued the $6 million riverfront investment creates a new, accessible public amenity in Davenport's poorest, most diverse and most densely populated neighborhoods. An investment they argued benefits and promotes healthier living, outdoor recreation and socialization to mitigate the spread of COVID-19 among those disproportionately impacted by the pandemic.

Additionally, aldermen and a representative from the Downtown Davenport Partnership said the Main Street Landing project was a crucial catalyst for energizing further private investment downtown.

Alderman Matt Dohrmann, Ward 5, said the project would create a showpiece that would aid workforce attraction and retention, bringing more visitors, business, investment and jobs to the riverfront and downtown.

"We need young people to be excited about our community," Alderman JJ Condon, at-large said. "And these are the most socio-economic diverse areas of our city. ... The sustainable future of the city is on our central city, not on its edges."

Condon continued: "You have to both invest in helping those who need a little more assistance in affordable housing, but also make sure you’re looking out for the long-term future of your city and what’s going to maintain your population and your workforce."

In total, the spending covers more than $43 million worth of spending, leaving the city with a potential $2.1 million deficit.

City Administrator Corri Spiegel and city Chief Financial Officer Mallory Merritt have said they anticipate other funding opportunities and partnerships will become available at the federal, state and county levels as a result of the federal stimulus package.

The city took initial steps to make zoning changes that would allow for re-imagined uses for the mall.

The city of Davenport will pay its insurance carrier approximately $260,000 as part of a settlement in a wrongful termination lawsuit filed by…

'If true, this is insane!': Iowa's Miller-Meeks retweeted a fake story about Biden withholding benefits to unvaccinated veterans, insinuating it was true.

Rock Island County officials want to use COVID relief funds to give employees $2,000 bonuses. The idea has been tabled until December.

A plan to give all Rock Island County employees one-time bonuses from American Rescue Plan (ARP) funds has stalled.

Early voting has begun. See who is running to be Davenport's newest alderman

WHAT WE KNOW: Through COVID-19, bar patrons have been allowed to take alcoholic beverages outdoors in Geneseo.

Imagines from the Mississippi River, top, and from the Davenport Skybridge, bottom, show the proposed development site for the Destination Play Area at Main Street Landing.

An aerial map shows the Main Street Landing area and the proposed site for the Destination Play Area.