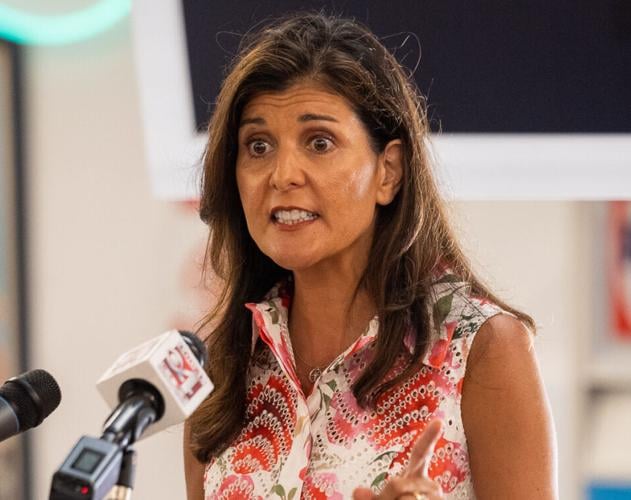 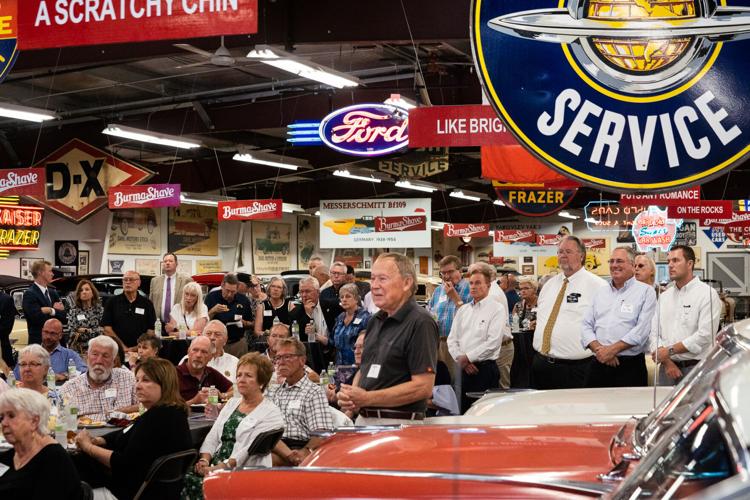 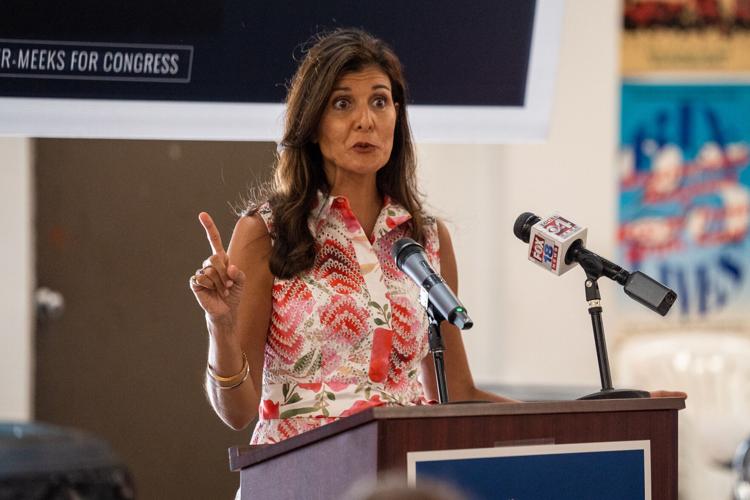 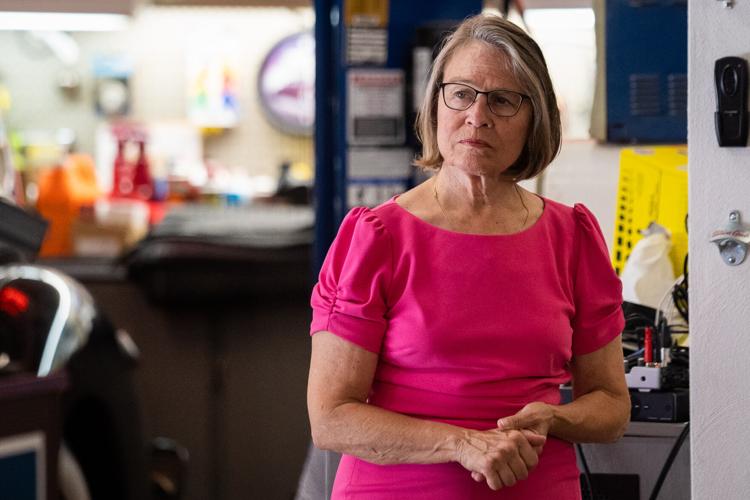 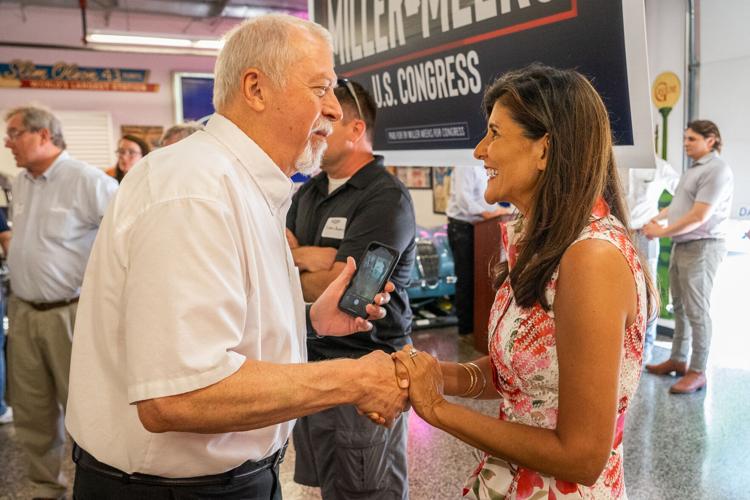 Former U.N. Ambassador and South Carolina Gov. Nikki Haley shakes hands with Dennis Peterson during a meet-and-greet at a luncheon, Wednesday, June 29, 2022, at the Dahl Old Car Home in Davenport.

It's Haley's second time visiting Davenport to campaign for Miller-Meeks, who's facing a reelection campaign for her seat she won by just 6 votes in 2020.

Haley, former U.N. Ambassador and former governor of South Carolina, kept the focus on the 2022 midterms throughout her speech to roughly a hundred Republicans standing among parked antique cars at Dahl Old Car Home in Davenport.

"What we have to remember is if we don't win in 2022, there is no 2024," Haley told reporters in response to a question asking if she's planning to run for president. "And so we are here in Iowa because boy, y'all grow 'em strong here in Iowa and you grow up tough and Mariannette has been a fantastic congresswoman. She has fought for all the right things."

Haley touched on themes such as border security, taming federal spending, promoting public support for parents to send their kids to private schools, and criticizing Biden's handling of the U.S.'s withdrawal from Afghanistan and Russia's invasion of Ukraine. Eastern Iowa Republicans greeted Haley warmly, lining up to shake her hand, talk, and get photos of her.

"Being a governor, she has such a wealth of knowledge to bring to what's happening at the federal level," Miller-Meeks said.

Iowa will continue holding the influential first-in-the-nation Republican caucuses, making Iowa a key state for Republican candidates testing the waters for a presidential run. National Democrats are considering taking the Hawkeye State off its perch as first on the nominating calendar.

Davenport was her first visit of a swing through the state — she's headlining a Republican GOP reception in Dubuque and is slated to attend Republican U.S. Rep. Randy Feenstra's annual Family Picnic Fundraiser in Sioux Center on Thursday. Last year, Haley gave the keynote speech at the Republican Party of Iowa's annual Lincoln Dinner in West Des Moines, and in 2020, she campaigned for Miller-Meeks in Davenport.

Haley is among a string of GOP candidates to visit Iowa in the last year. Former Secretary of State Mike Pompeo made a trip to Iowa, including a visit to Davenport in March and former Vice President Mike Pence attended a fundraiser with Randy Feenstra in northwestern Iowa.

'This national self-loathing has to stop'

In her speech, Haley pointed to the gross national debt topping $30 triillion for the first time last year, saying more needed to be done in Washington, D.C., to tame spending amid rapid inflation.

"Some things have to change," Haley said. "And what we have watched Mariannette do is she has fought the wasteful spending. She has said when you have to borrow interest to pay your debt, that's a problem and a national security threat. But she also acknowledges that the way to fix the problem is to balance the budget. You do it every day, you never spend more than you make."

During the Trump administration, most Republicans voted along party lines to pass a $1.5 trillion tax cut package, adding to the national deficit. Ballooning debt was a main concern among moderate Democrats that stalled President Biden's multi-trillion-dollar Build Back Better Act.

Some economists argue as long as the economy is improving, interest rates are low, the U.S. can borrow money relatively cheaply to invest back into the economy.

In a nod to efforts across the country to root out "critical-race theory," in schools and trainings Haley said: "This national self-loathing has to stop."

Haley pointed to Ukrainian efforts to battle back Russia as an example of patriotism.

Haley said her parents, who immigrated to the U.S. from India, are "offended by what's happening at the border."

On foreign policy, Haley argued that Biden administration could've deterred the Russian invasion of Ukraine with a stronger showing of force. Congress has authorized foreign aid and weapons to be sent to Ukraine and neighboring NATO countries, and the U.S. military has provided intelligence on the Russian military. The Biden administration has said it has tried to avoid directly antagonizing Russia into a war between the two powers.

"We need a strong America," Haley said. "Not a nice America, a strong America that prevents wars that understand that the only way you have peace in the world is with strength."

Scott County Supervisor Candidate Republican John Maxwell said he liked Haley's ideas, particularly on the border, but said "all the cards are on the table," and said Pompeo visited his farm, Cinnamon Ridge Dairy, earlier this year.

"I think that the biggest thing we need to have is unity within on what we want to accomplish and then I think you get more people, independents and others to agree," he said.

In a statement, Democratic National Committee spokesperson Ammar Moussa wrote: "Nikki Haley stood shoulder to shoulder with Trump in his administration while he cut taxes for the ultra-wealthy and biggest corporations, ran up the debt, and sold out our country - Iowans see right through her phony politics." 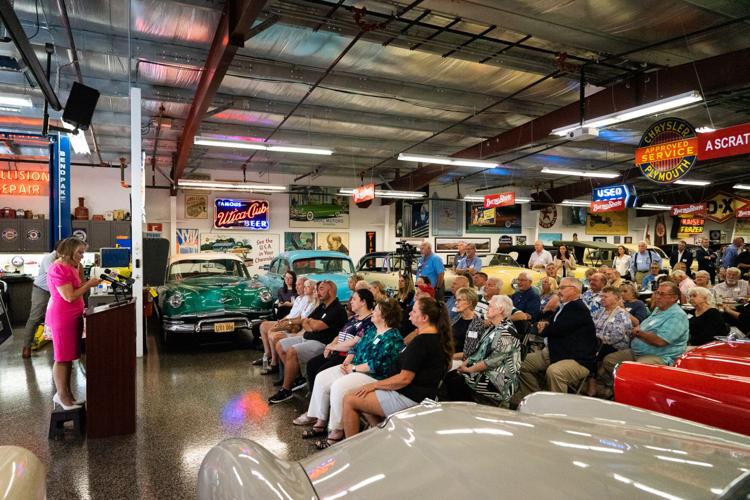 Former U.N. Ambassador and South Carolina Gov. Nikki Haley shakes hands with Dennis Peterson during a meet-and-greet at a luncheon, Wednesday, June 29, 2022, at the Dahl Old Car Home in Davenport.