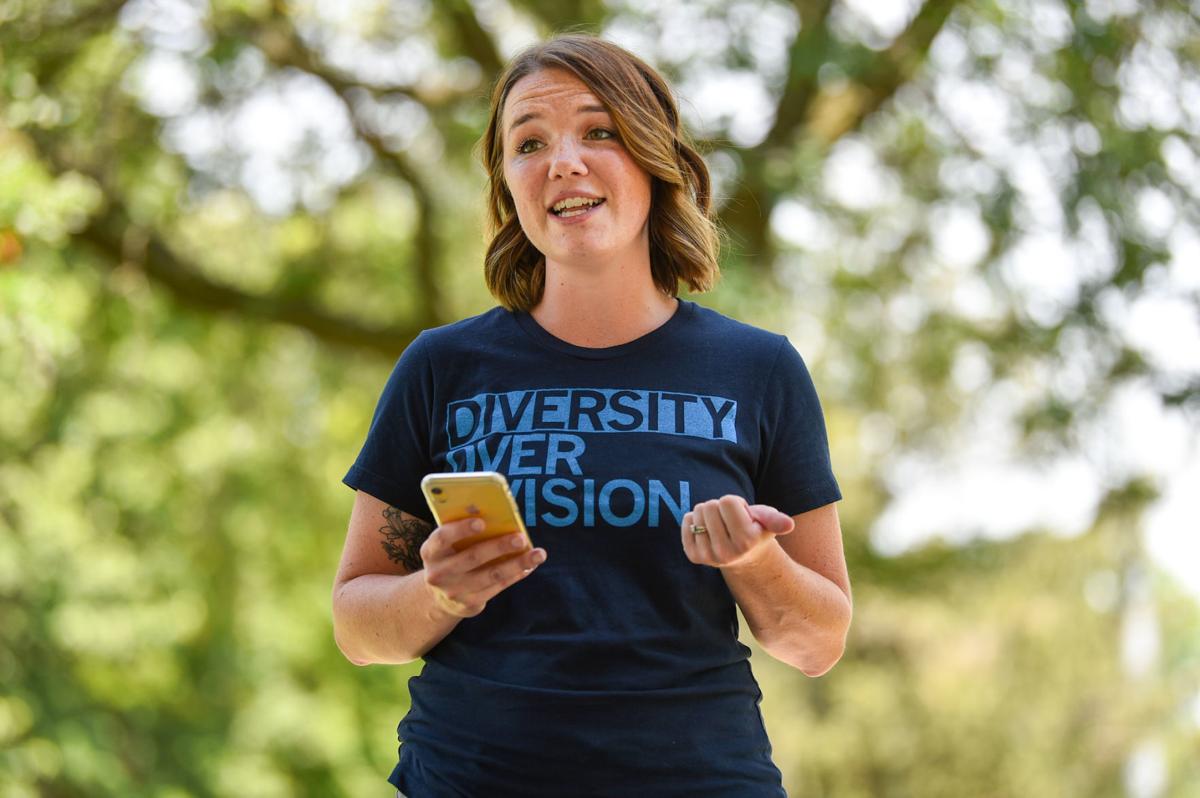 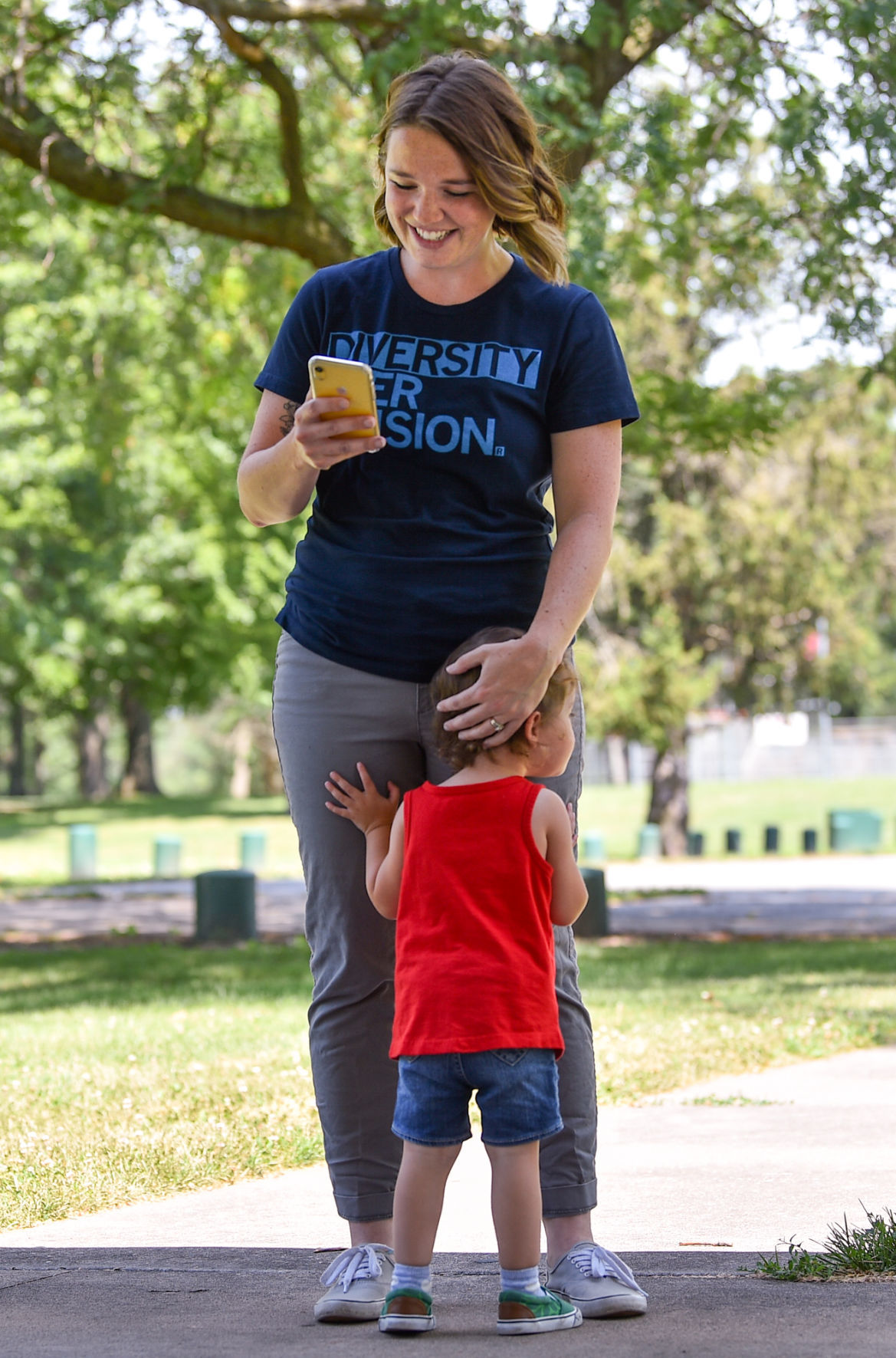 Elizabeth VanCamp is hugged by her daughter Leda, 2, as she announces her candidacy for Davenport mayor Saturday, July 20, 2019, at Emeis Park in Davenport.

Well before Elizabeth VanCamp launched her bid for mayor in July, she knew she wanted to make a big difference — even if she was unsure how to do it.

As a child, VanCamp says her parents often tried to give her a reality check whenever she’d talk about starting her own nonprofit. After college, she worked with local nonprofit Q-C Hand in Hand — an organization focused on helping special needs children— but left after a little more than two years, she said, because she wanted to see changes happening faster.

Now, VanCamp is one of six candidates running to replace outgoing Mayor Frank Klipsch. The primary election will be held Oct. 8, and the top two vote-getters will advance to a runoff on Nov. 5.

City government operates under a weak-mayor system, where day-to-day administrative tasks are handled by top city staff and the mayor rarely acts directly on policy decisions. Still, VanCamp views the position as an opportunity to help the whole community grow by addressing big societal issues that are apparent in many areas of the city, including poverty, homelessness and economic disparity.

“The mayor really decides the direction of the city,” VanCamp, a 29-year-old political newcomer, said recently during a meeting with the Quad-City Times Editorial Board. “And I just thought, if we’re gonna make change we need to start from the top.”

As she makes her debut bid for elected office, VanCamp recognizes that she does not have the same level of political experience with the City Hall as some of her rivals. But she does not think that’s the main thing voters should be concerned with when they head out to the ballot box next week, saying what you do with your experience matters more than the experience itself.

“What I think is more important is knowing when the status quo isn’t working anymore,” she added. “And right now, how things are going in Davenport, it’s not working for most people in this community."

Top on the list of to-dos for VanCamp is addressing poverty, homelessness and affordable housing.

Addressing those major issues would require a multi-faceted approach, VanCamp said, that likely would require some action at the state or federal levels. She wants to advocate for increases to the minimum wage in Iowa, for example, and look for more state and federal grant money to go toward boosting the availability of affordable homes in the area.

She is also a fan of a model employed in Rockford, Illinois, that made homelessness a major priority in city government. The city was the subject of national attention last year for its program aimed at ending veteran homelessness, and VanCamp says there are strategies used there that she wants to replicate in Davenport.

As for the city taxpayers’ share for addressing longstanding poverty, VanCamp says her vision would require some local investment but is unsure where the money would come from. Overall, though, she says a long-term focus on addressing poverty would probably mean taking some funds away from other parts of city spending. And she contends that will save money in the long run by improving the community through reduced health care costs and policing.

VanCamp also thinks there needs to be greater diversity in local government staff and employees. She is also concerned that there are some members of the community who aren’t getting a seat at the table to address issues that affect them personally.

“That’s one way we will be able to make great strides toward a better community because if you bring everyone who is affected by decisions at the local level to the decision-making table we can actually make sure that their needs are met and discussed and we can actually work towards solutions that work for everyone,” VanCamp said.

Flooding has also become a major issue of concern for Davenporters following the Flood of 2019. In April, the breach of the city’s temporary floodwall resulted in significant damage to the lower part of downtown and led several businesses to close for weeks. Some decided not to reopen downtown at all.

When it comes to flood protection, VanCamp is calling for the conversation to include the worldwide discussion about how to address climate change, an issue that’s largely unspoken of in City Hall.

Asked about what she would do to address climate change during a public forum last week, VanCamp said city government needs to step in where state and federal officials are not. She recalled doing a high school project on former Vice President Al Gore’s documentary “An Inconvenient Truth” and said her teacher thought she was “nuts.”

“But the stuff is real and it’s happening and we’re seeing the effects of it here in the Quad-Cities,” she added. “And I don’t believe that we have to leave it up to the national government and the world governments, because look at how little change and little action they’ve taken on it.”

Aside from expanding natural wetlands as part of a solution for flooding, VanCamp says the city could be doing more to lower its carbon footprint. Examples of that include committing to using 100% renewable energy by the year 2050, installing more renewable energy on all city-owned buildings, making it easier for residents to access renewable energy and promoting more environmentally-friendly building designs.

A long history in Davenport

Her great-grandparents lived near Riverview Terrace Park, where she spent a good part of her childhood going to church down the street and watching New Years Eve fireworks from the yard. Both of her parents work in schools, her mother is a nurse in the Bettendorf Community School District, and her father is a teacher in the Davenport district.

The middle of five children, VanCamp attended Williams Intermediate School and later went to West High School. She says she was heavily involved with extracurriculars, including choir and band. And she even met her husband at Williams, though they only started dating when they were at West High.

“He claims that I was a little intimidating, and we joke now it’s just because I’m a strong woman,” she said with a laugh.

VanCamp later pursued an education in social work and worked in the field briefly but succumbed to burnout. Now, she commutes to Iowa City for her full-time job as a social media manager with the University of Iowa Hospitals and Clinics.

Among the motivations VanCamp regularly points to in her decision to seek elected office is her two-year-old daughter. She says she wants to make the city a better place for women and girls, saying she has had to deal with sexism fairly consistently throughout her mayoral campaign.

Examples, she said, include being told to smile more often, being referred to as a “girl” and being advised to obtain her husband’s blessing before running for office. In her view, VanCamp says she already has three strikes against her.

“I am younger, I don’t have political experience and I’m a woman,” she said.

If elected, VanCamp plans to put that career on hold and focus on being a full-time mayor. And while she thinks the platform may sound radical to some, she argues that her goals are both reasonable and achievable if the community rallies around them.

“They’re things that aren’t going to happen overnight nor do I expect them to,” VanCamp said. “But they are things that will make our community better overall and I think that needs to be the goal of Davenport. We need to have values and goals for our city.”

Should Davenport’s municipal elections change? Every mayoral candidate thinks so

Two-year terms in City Hall has long been a topic of debate among Davenport residents.

Heather Brinkschroeder, a candidate on the ballot for Davenport’s 4th Ward in the upcoming Oct. 8 primary election, says she is no longer purs…

Roughly 30 years ago Scott Hobart worked with troubled kids at the Wittemyer Youth Center. He became the director of the Scott County Juvenile…

'A friend of the people': In his quest to become Davenport’s next mayor, Steve Duffy says he’s a team player focused on increasing public safety

In the backroom den where he spends most of his time these days, Steve Duffy is surrounded by memorabilia celebrating his favorite baseball te…

Elizabeth VanCamp is hugged by her daughter Leda, 2, as she announces her candidacy for Davenport mayor Saturday, July 20, 2019, at Emeis Park in Davenport. 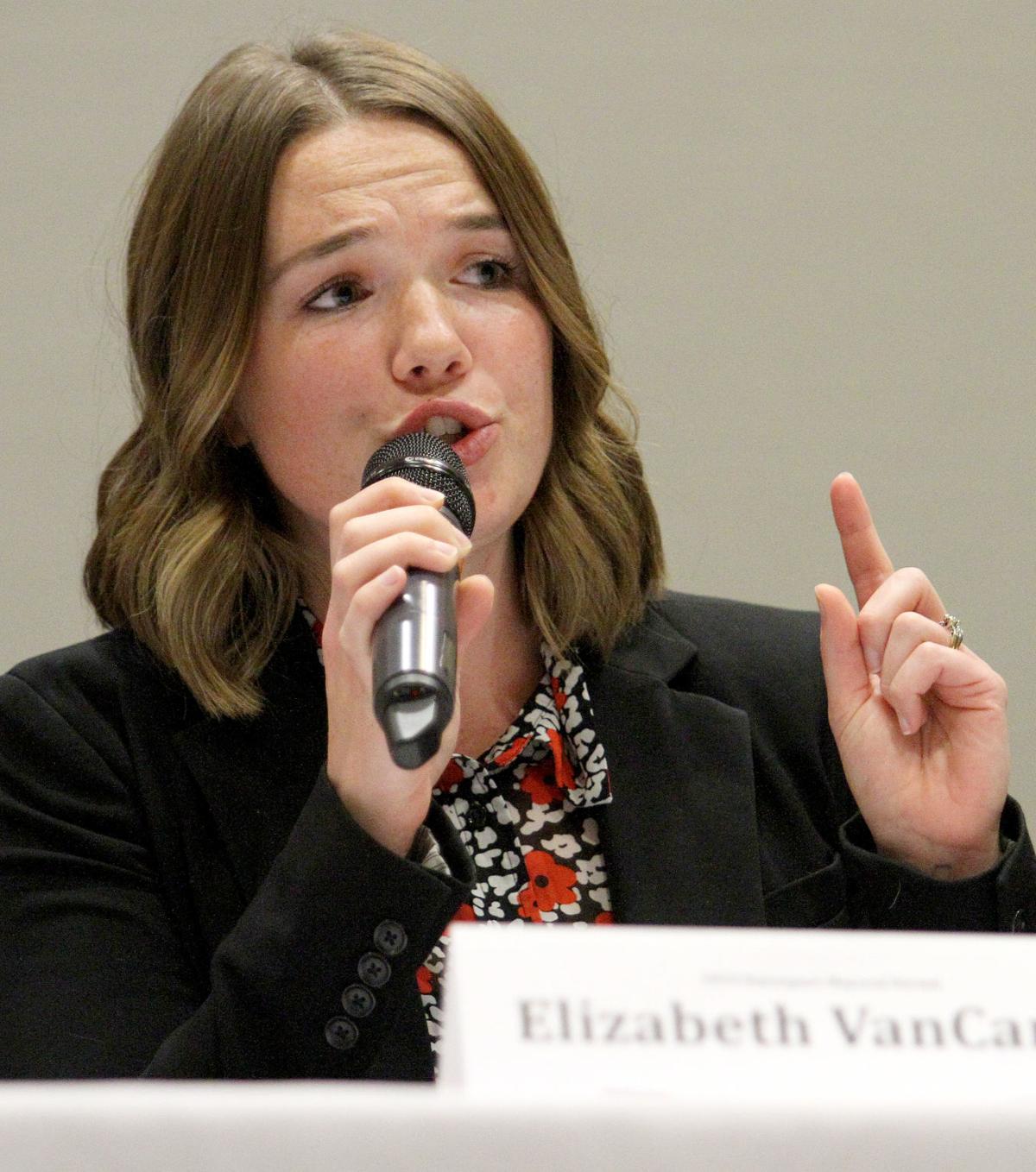