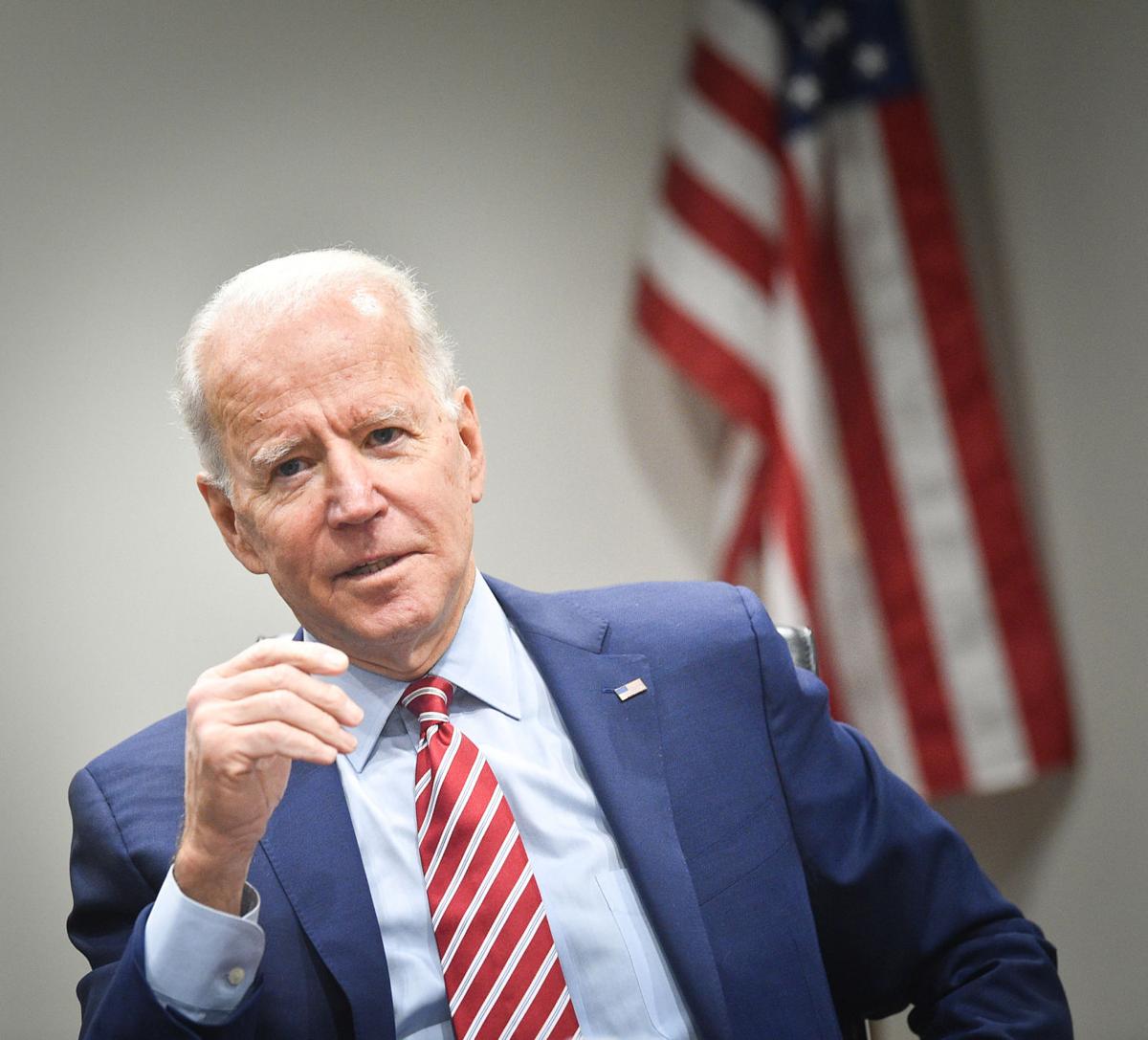 President Joe Biden has focused on pandemic relief in the early days of his presidency. He has also vowed to raise taxes on some businesses, strengthen unions and raise the minimum wage. 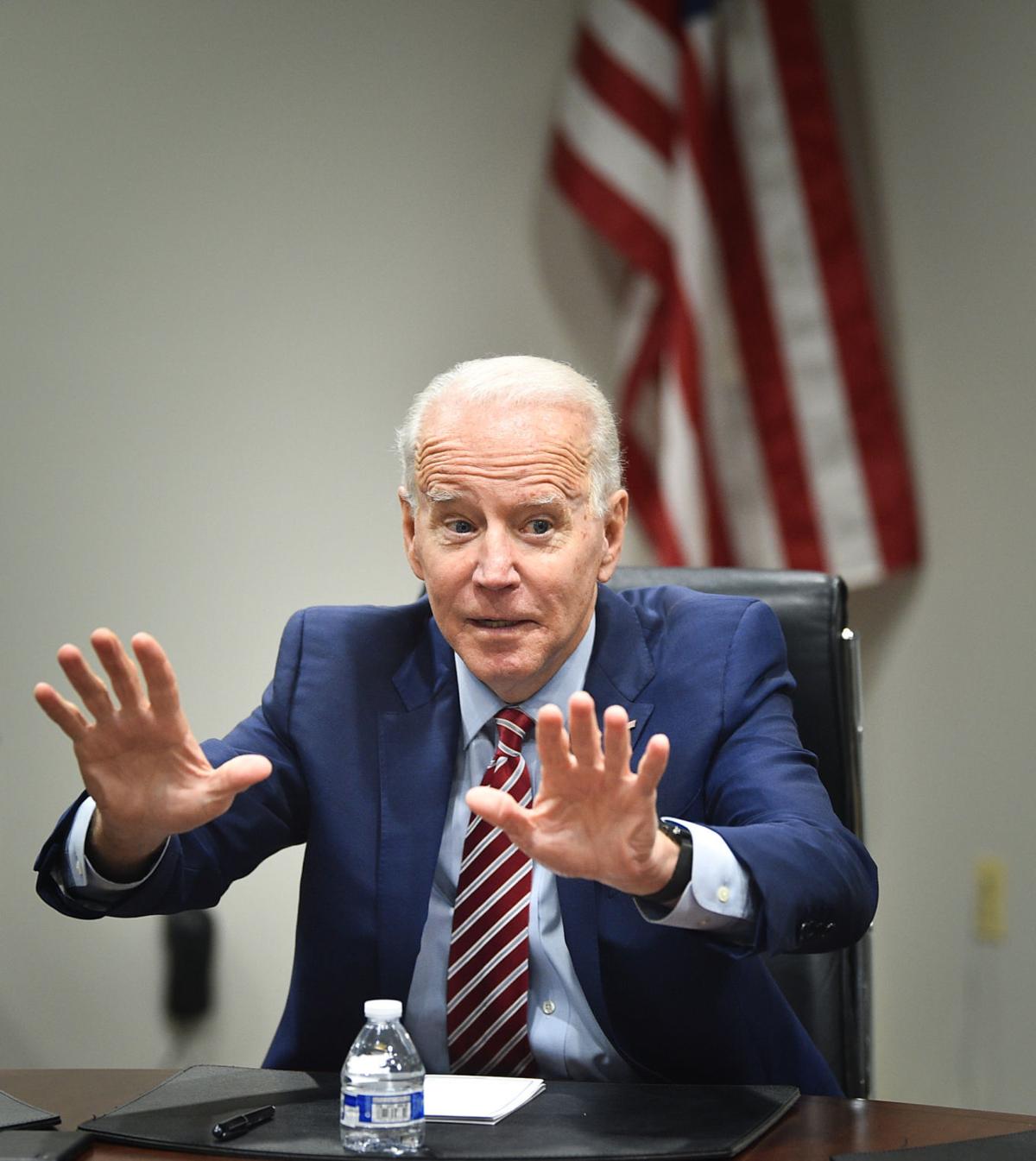 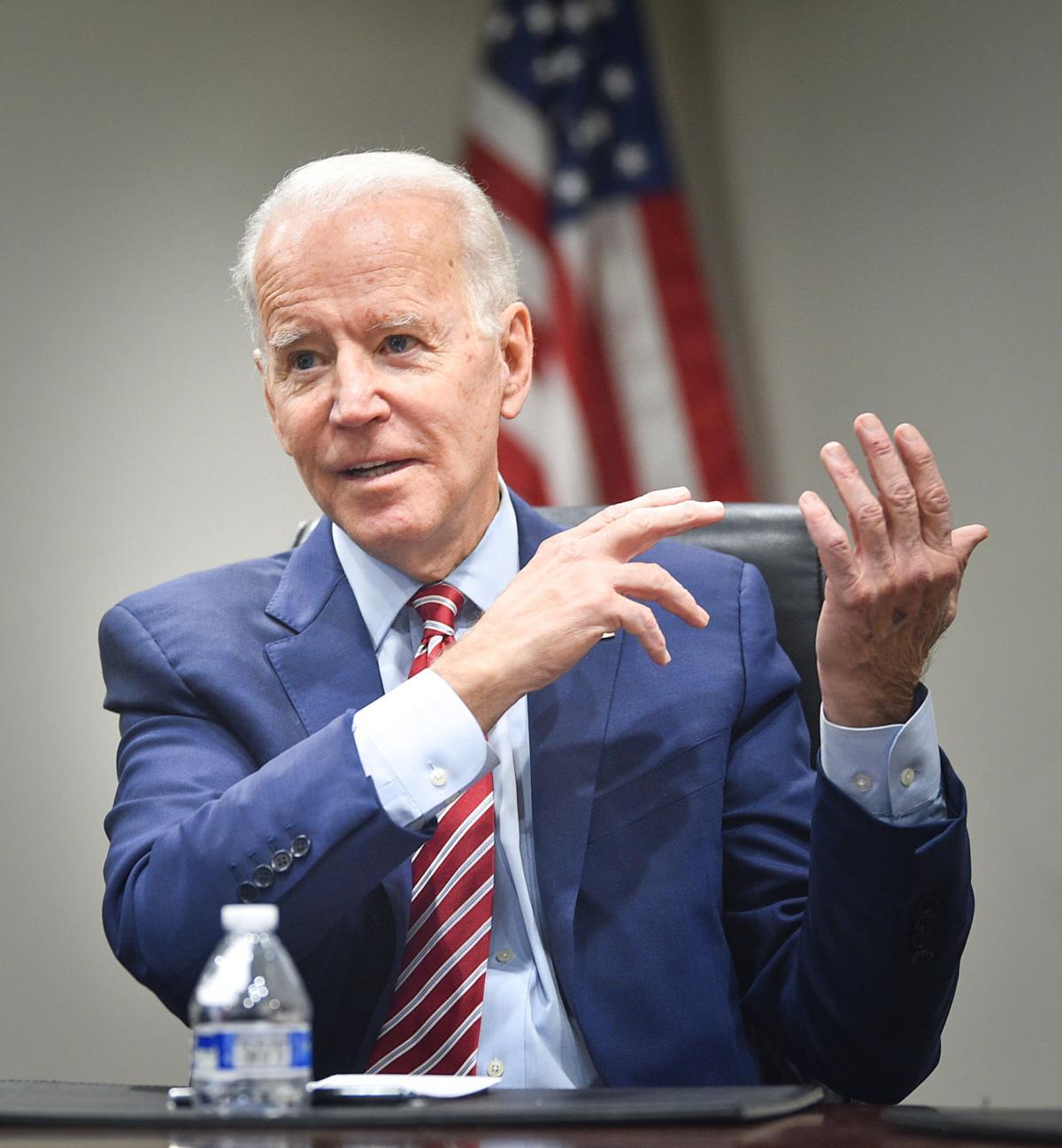 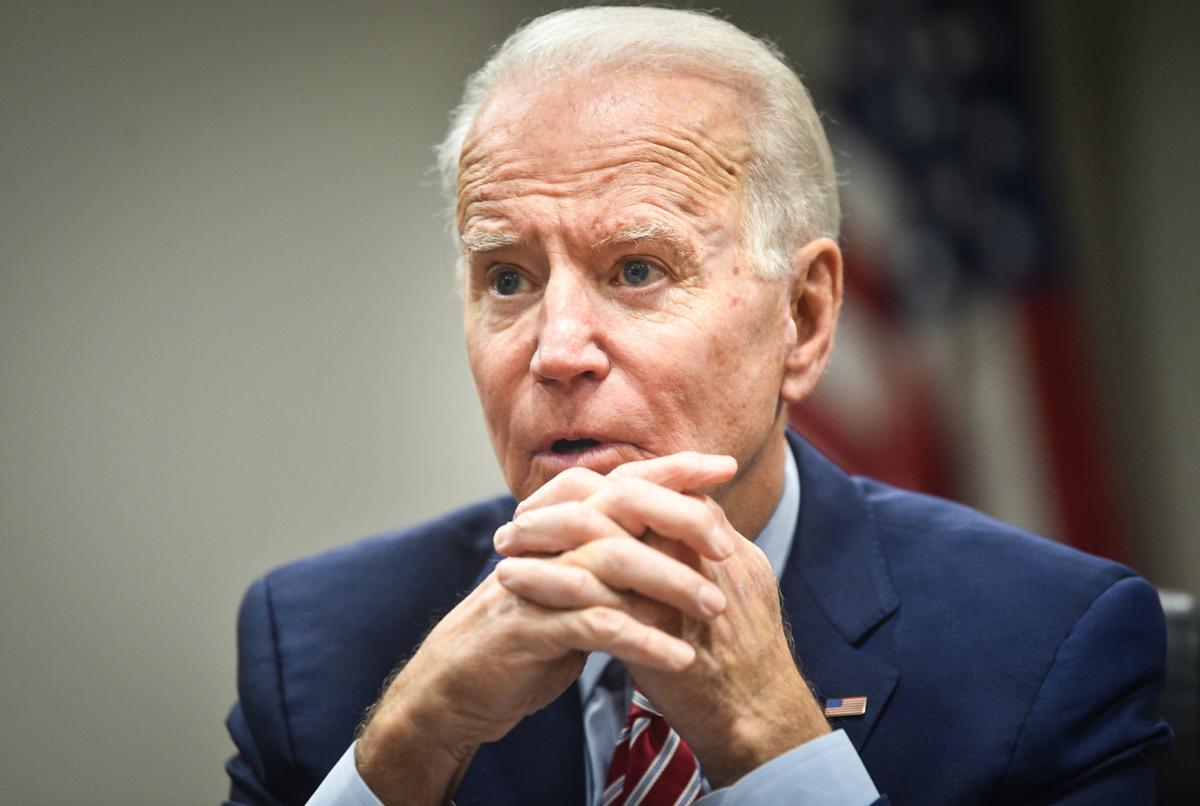 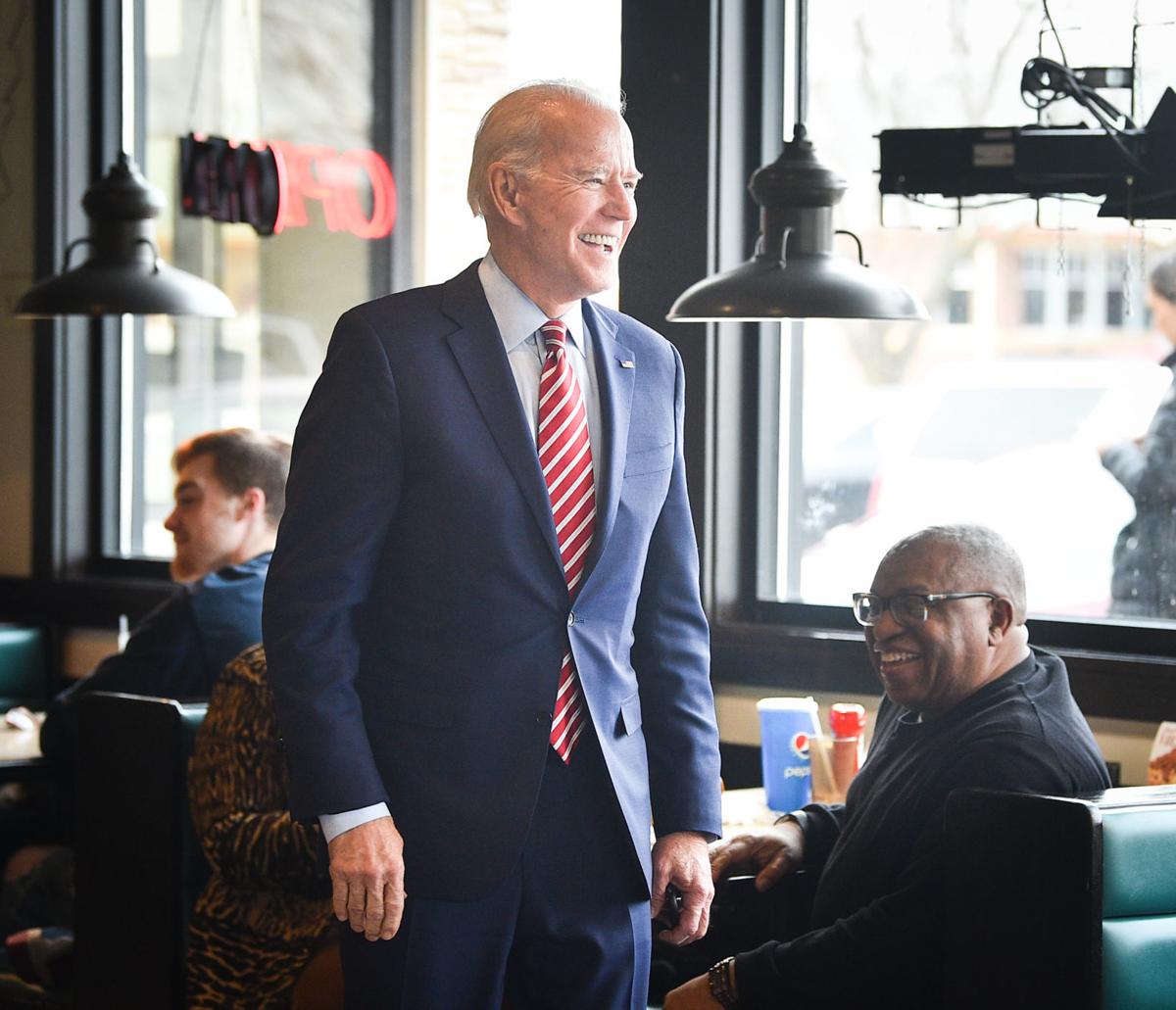 Former Vice President and Democratic presidential candidate Joe Biden laughs as we walks to each booth at Ross' Restaurant Monday, Jan. 6, 2020, in Bettendorf. 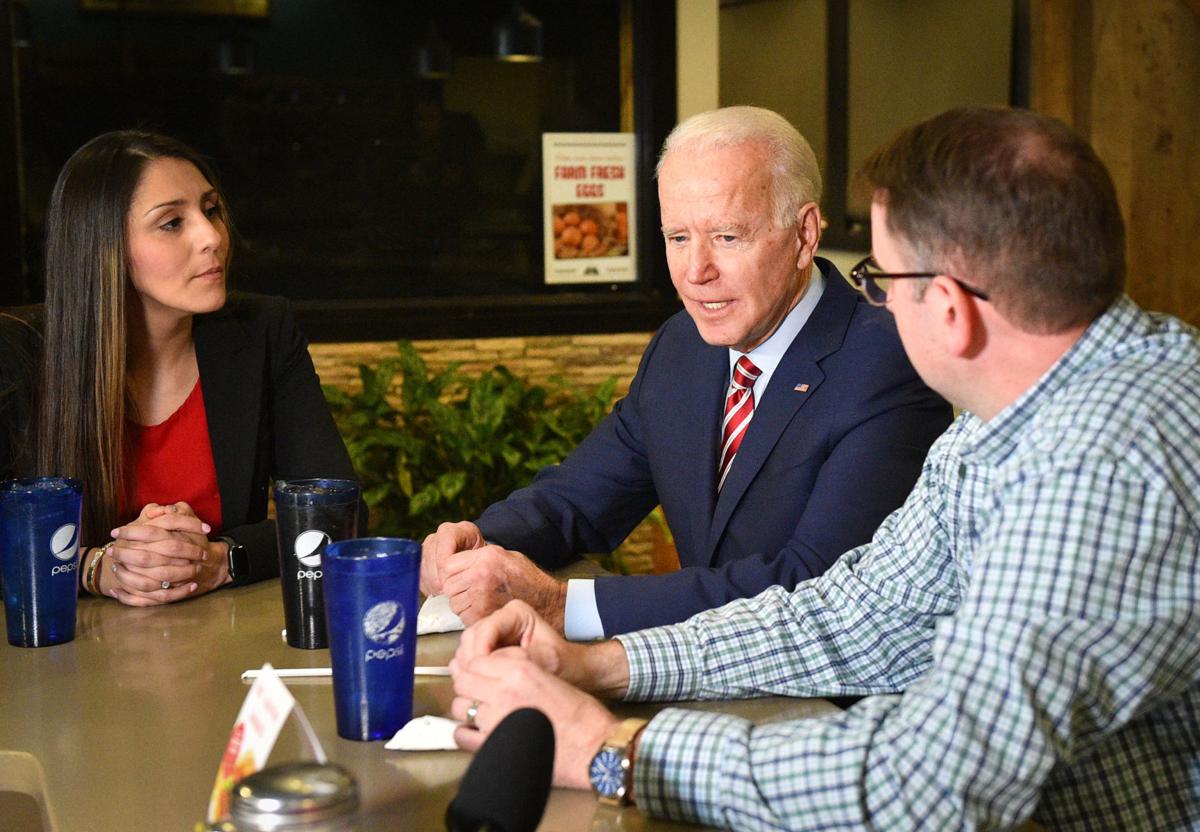 Democratic presidential candidate and former Vice President Joe Biden referred to his decades of political and foreign policy experience Monday to make the case why he is the best choice to beat Donald Trump in the November general election.

In a meeting with members of the Quad-City Times and Dispatch-Argus editorial board, Biden said the United States has lost ground in its standing with other nations since Trump took office.

As president, Biden said he would improve the nation's image and repair relations with other countries.

"We have done enormous damage to our reputation around the world as a responsible world leader," Biden said. "Polling in February showed (Chinese President) Xi Jinping is more respected than our president. Right behind him is Vladimir Putin. It has an effect on our (national) security. Look, I'm the guy President Obama asked to get 156,000 troops out of Iraq. That was one of my responsibilities.

"I used to always say, all politics is personal — particularly foreign policy. You have to know what the other person's bottom line is. I spent a lot of time with Putin. Putin knows that I know who he is and he knows who I am. I've had that very frank, personal discussion with him."

When asked if his foreign policy positions are as clear as those of Bernie Sanders', Biden pushed back.

"Bernie Sanders and foreign policy: Those are two phrases that don't usually go together," Biden said. "I've gone out of my way not to criticize my opponents. I will stack my record on foreign policy against anybody you know. Anybody at all.

If elected president, Biden said he would work hard to get a public option included in the Affordable Care Act. He said getting the ACA passed was a major success, and it paved the way for more expanded health care legislation.

"I worked my tail off to get to get every Democrat to vote for it," he said. "There was no consensus about it being a right and not an option. Once it got passed, I would meet with the president every morning at 9 a.m. We spent literally thousands of hours in over eight years in the situation room, and I would have lunch with him once a week."

Biden said he asked Obama why he wanted him to be his vice president.

"He said, 'I know you'll never walk in the Oval Office and be intimidated and not tell me what you think. I need people who will be level with me and not be intimated by the office.' We used to argue like hell.

Biden said his health care plan will cost about $750 million to subsidize a Medicare option. He also would work to lower drug prices, allow people to keep their private insurance policies and expand access to health care when it is most needed.

"I believe I can get this passed if I am president," he said. "But I have to be able to help Democrats win back the Senate. The question is not just who can beat Donald Trump, but who can help us win 51 seats in the Senate."

In terms of education, Biden stressed the importance of early childhood education and the need to begin schooling by the age of three. To expand opportunities for higher education, Biden said he would double Pell Grants from $6,000 to $12,000.

He said he would raise teachers' salaries, increase federal funding for public schools and staff schools with more social workers.

"You have to increase teachers' salaries. They should be making closer to $60,000 a year with some seniority," he said. "It's obvious our Republican friends don't value education because they've cut budgets."

Biden, 77, rejected the notion he is too old to be president or too much of a centrist Democrat. He said the party has a "big tent" and there are many talented Democrats working their way up, including U.S. Rep. Cheri Bustos, D-Moline.

"We need to deepen the bench in the Democratic party," he said. "There are a lot of really talented people. But I respectively suggest, if there is any time in modern American history where there is a need for someone who doesn't need on-the-job training, who has a depth of experience and a record that is significantly more correct than not correct.

"I've gotten more major legislation passed than all of the people running combined. The fact is, I have learned how to put people together. Every time we had a problem in the (Obama) administration I got sent up to Capitol Hill. I know how to get things done.

"The country needs a real dose of decency."

Sanders insists he is the strongest candidate to take on Trump

Joe Biden in Davenport on Tuesday

In Davenport, Biden says Ernst is scared he might be Democratic nominee

If you were planning to attend the presidential inauguration of Joe Biden and Vice President Kamala Harris next week, forget about it.

Biden said Trump is bringing the U.S. close to war with Iran

'It's a leap from literally any job': In Davenport, Buttigieg says he has necessary experience to be president

DAVENPORT -- Democratic presidential candidate Pete Buttigieg said his lack of political experience does not disqualify him from being president.

President Joe Biden has focused on pandemic relief in the early days of his presidency. He has also vowed to raise taxes on some businesses, strengthen unions and raise the minimum wage.

Former Vice President and Democratic presidential candidate Joe Biden laughs as we walks to each booth at Ross' Restaurant Monday, Jan. 6, 2020, in Bettendorf.