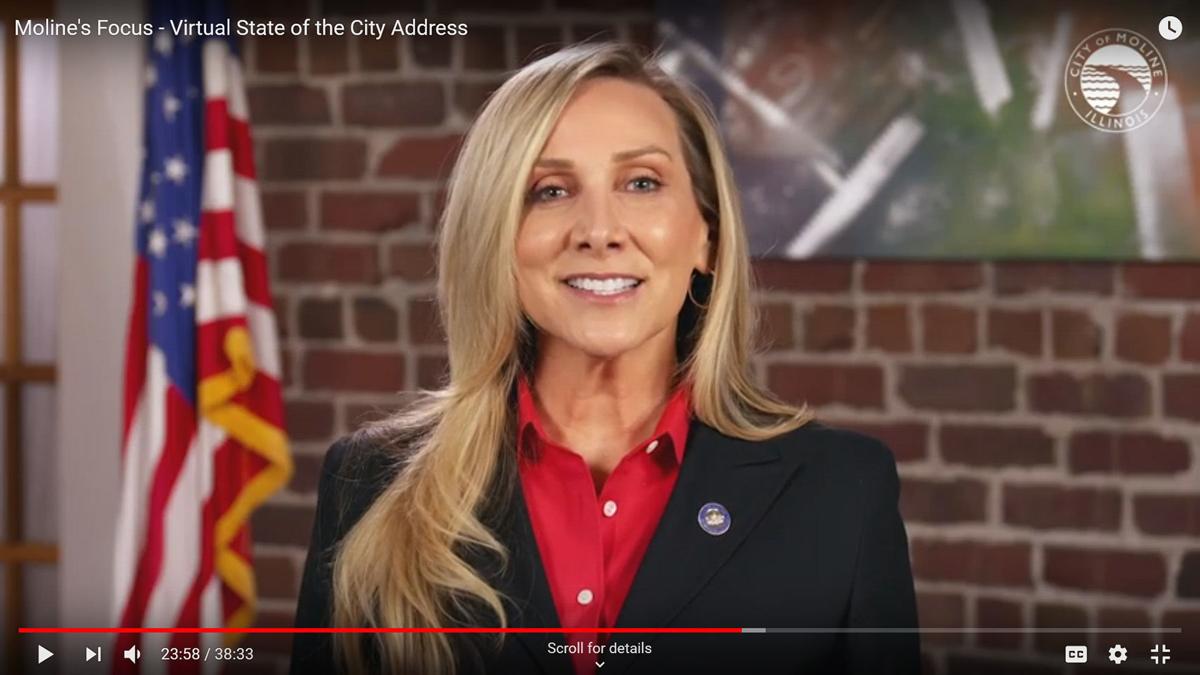 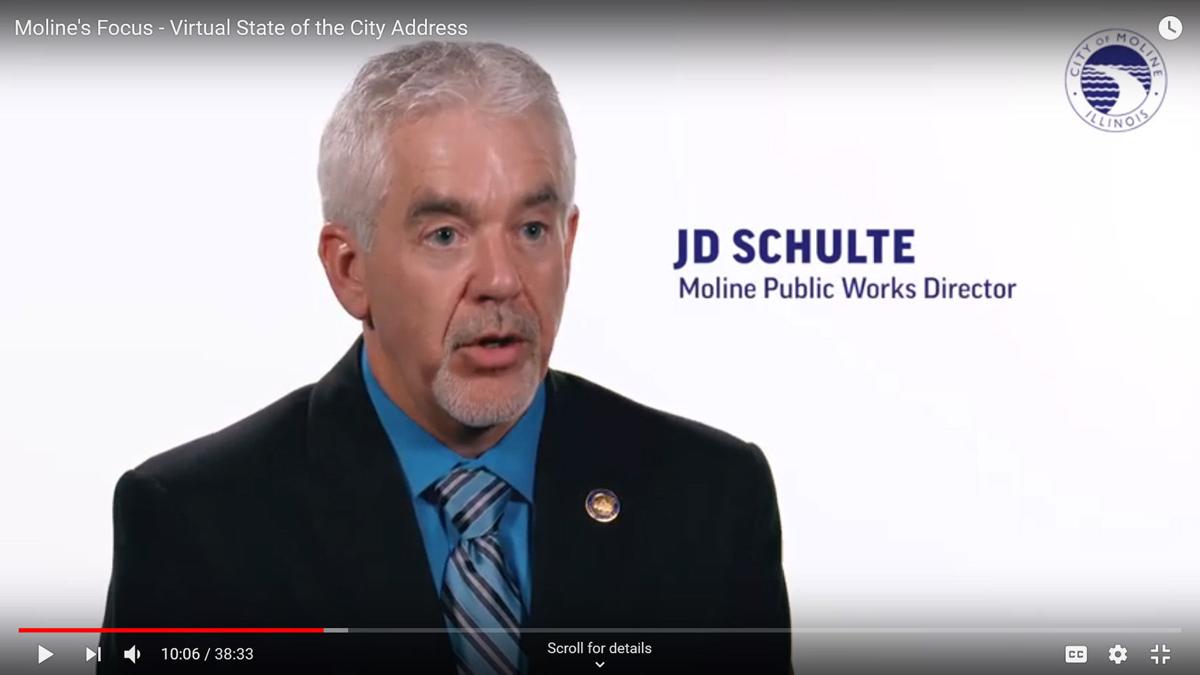 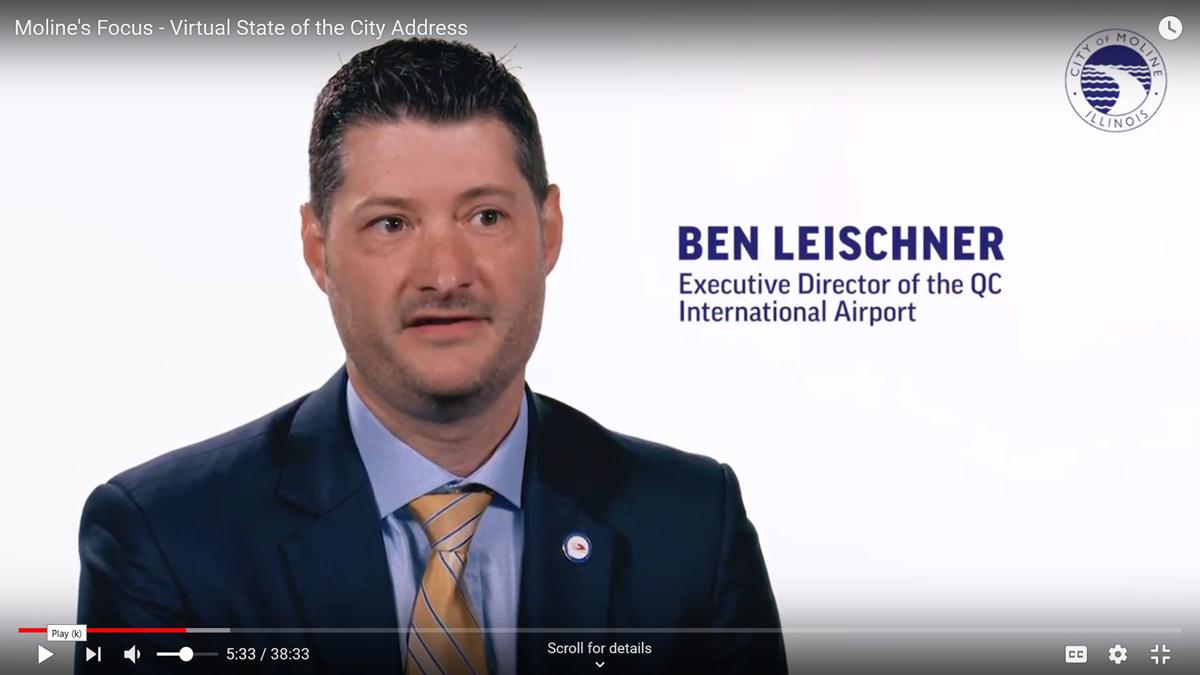 For the first time in Moline's history, the annual state of the city address was held virtually due to the coronavirus pandemic.

A pre-recording of Mayor Stephanie Acri's address was released at noon Monday on the city's website, YouTube, the city's economic development Facebook page and broadcast on Mediacom channel 18 in order to reach as wide of an audience as possible.

Acri addressed the financial burden placed on the city as a result of COVID-19 and stressed efforts to assist residents and business owners by allowing late payments on utilities, sales taxes and waiving late fees.

"We are entering a radically different time in our financial situation," she said. "This situation is not only going to impact our private businesses, but it's going to impact our public organizations. This city council is committed to making this work. We're going to figure out how to provide the services at the level that you expect within the means that are available to us.

Acri pledged not to take any action that would burden residents and small businesses such as increasing tax rates.

Finance Director Carol Barnes said the city expects to see a loss in revenue of $8 million to $10 million, but noted the city's strong fund balances puts it in a good position. The city currently has about $11.5 million in reserves.

Barnes said Moline has 15 different revenue streams that make up 60 percent of total revenues. She said the city included in its recent budget about $15.9 million in property taxes at a levy rate of $2.05 per $100,000 of equalized assessed value.

"As far as total tax dollars are concerned, 100 percent of them go toward police and fire pension funds, as well as supporting our parks and library funds," Barnes said. "There are no property taxes that are supporting the general operating fund of the city."

Barnes said the city would do its best to monitor the current situation in terms of revenue projection, but she does not expect revenues to return to their previous levels right away.

Executive Director of the Quad-Cities International Airport Ben Leischner talked about the airport's strategic vision, including a solar energy project that will help offset up to 50 percent of the $600,000 in energy costs spent by the facility every year.

"Solar is what we've focused on," Leischner said. "A nice byproduct of that is we will be able to provide covered parking in our short-term lot. The environmental stewardship brings the passenger-amenity piece to it."

Acri ended her address with a montage of photos of Moline residents as the Moline High School choir sang the National Anthem in the background.

"I am filled with hope because we are navigating this together," Acri said. "I want to thank you for taking your time to find out what's going on in the city of Moline and I also want you to stay safe."

Acri told a reporter later Monday that the video was produced by dphilms. City officials only removed their face masks when it was their turn to speak, which they did without the use of teleprompters.

"I hope this virtual state-of-the-city address shows our willingness of how we can accommodate what's happening with COVID-19 and still meet the needs of the community," she said.

Moline police officer with COVID-19 says he would take the virus over 'strep throat, chest cold or the flu'

A Moline police officer is downplaying symptoms of the coronavirus after testing positive for the disease, saying he'd choose the virus over a…

Municipal Matters: Moline could lose up to $10 million due to COVID-19

The economic impact of the coronavirus pandemic is affecting Moline, as city officials struggle with

council members opted to hold off on more than $200,000 in sidewalk repairs and construction.

Schulte said Tuesday (what other services are you cutting?) (include in Moline impact story)

The city of Moline has cut funding to the Moline Public Library, closed services and furloughed all library employees as the city struggles fi…