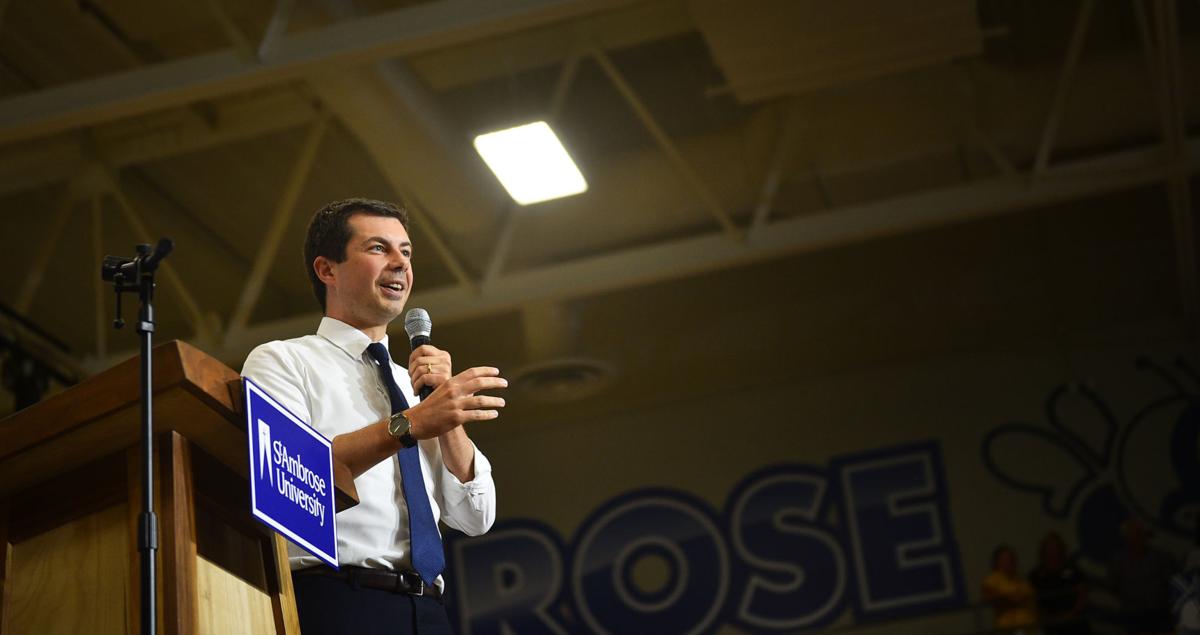 Democratic presidential candidate and South Bend Mayor Pete Buttigieg speaks during the “Leading the Nation — Iowa 2020” forum as part of a series organized Quad-City Times, Quad-Cities Chamber of Commerce and St. Ambrose on Tuesday at Lee Lohman Arena in Davenport. 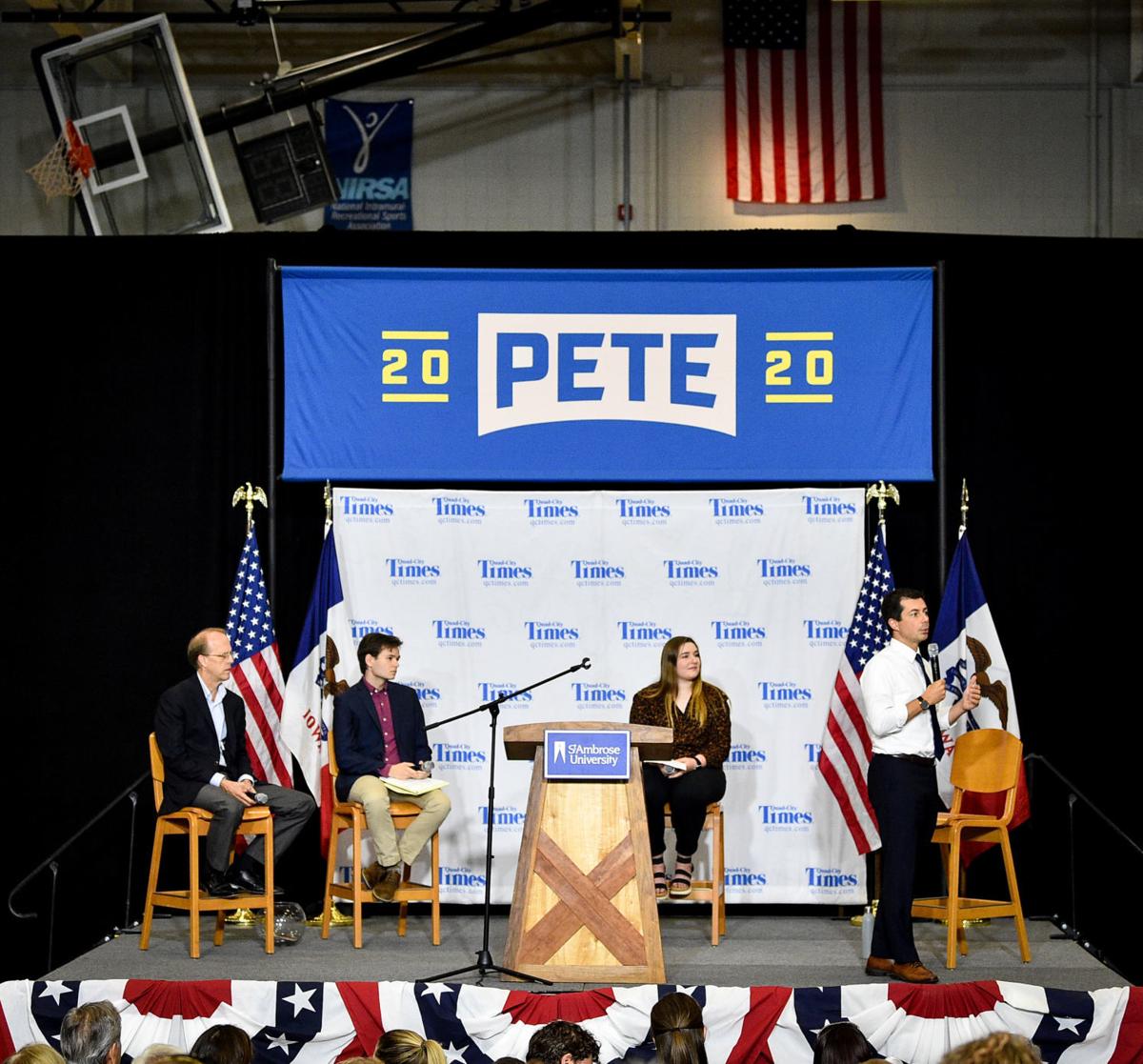 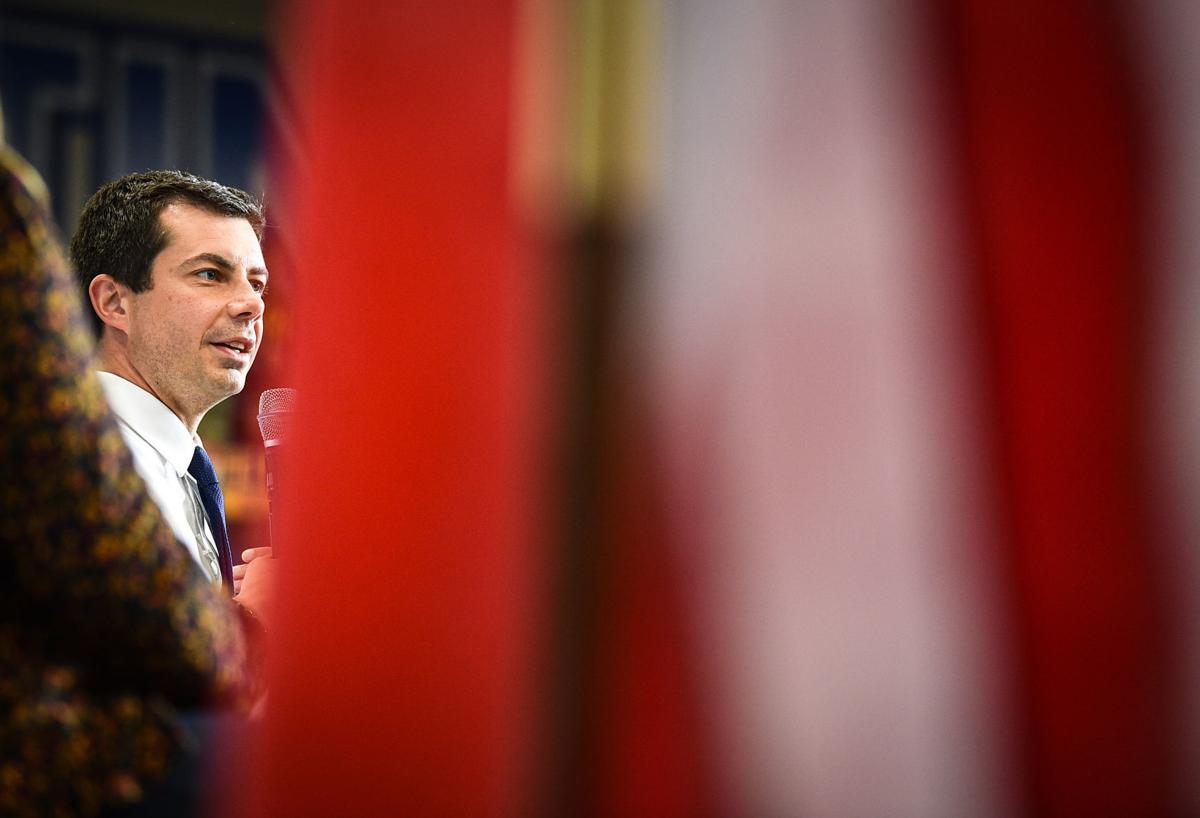 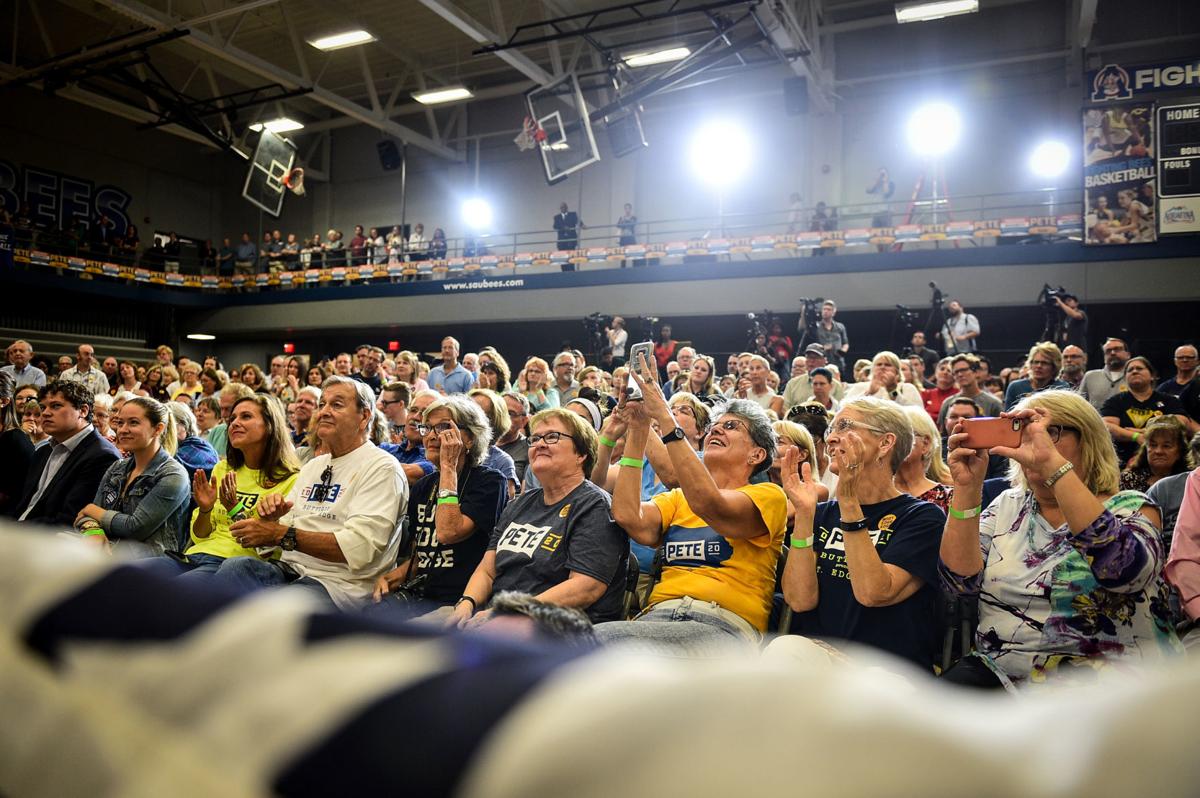 With his campaign gaining momentum, Democratic presidential candidate Pete Buttigieg stopped in Davenport on Tuesday, his final stop on a four-day bus tour of eastern Iowa.

It was standing room only as more than 1,000 people packed into the Lee Lohman Arena of St. Ambrose University to see Buttigieg, who took part in the "Leading the Nation — Iowa 2020," forum, the third in a series organized by the Quad-City Times, Quad-Cities Chamber of Commerce and St. Ambrose.

Buttigieg, 37, has been mayor of South Bend, Ind., since 2012. He said he was motivated to run for president because of "the conviction that government was invented to make our lives better in our everyday experience."

"I didn't know until I left for college that it was unusual to have empty factories," he said. "When I came back and eventually became mayor and had the chance to help guide our community to a better place, I saw how much of a difference those decisions can make."

Buttigieg called President Trump a "mesmerizing show," adding, "we've got to re-center our politics and re-center our presidency. I'm trying to create a presidency where, when you watch the White House on the news, your blood pressure goes down instead of up.

"This president represents a crisis of its own," he said. "I don't think we would have come close to a presidency like this if we didn't already have a problem in the way our economy and our political system was not responding to our needs. The purpose of a presidency is to pull Americans together to unify us and to lead us to do things that are difficult."

Buttigieg said nationalism has been used by Trump to divide Americans and brought up the recent incident in which Trump told several minority congresswomen to "go back" to their own countries, even though they are U.S. citizens.

"Love of country is sometimes being used to tell people they don't belong," Buttigieg said. "But in my view, if a member of Congress speaks up and says the president is not serving her country well, that is an expression of patriotic duty, and she deserves better than to be told to go back to where she came from."

Buttigieg spoke out against Medicare for all, an idea promoted by Warren and Sanders, saying the plan would force those who prefer private insurance to participate.

"We could offer Medicare for all ... who want it. I'm not going to order you to abandon your private care and come over to mine," he said, drawing loud applause from the crowd. "That's what it means to live up to the value of freedom. It's not enough to make sure everybody has health insurance coverage, we've got to make sure it's affordable. And we've got to make sure that it's as easy and affordable to get coverage and care for mental health and addiction as it is for primary care."

Buttigieg drew frequent applause from the crowd, many of who were decked out in T-shirts and holding signs reading "BOOT EDGE EDGE."

Buttigieg, responding to a question from the panel, said he supports doing away with the Electoral College.

"There is a principle at stake here. When it comes to the general election for the American presidency, everybody's voice should be equal," he said. "The way we make that happen is the way we run every other election in this country, which is we just count up all the votes and give it to the person that got the most. There is an elegant simplicity here."

Buttigieg said the Electoral College is not a system that "privileges small states. It just benefits some states."

"Or if you believe your life might be different if Donald Trump were not president of the United States."

Buttigieg said his plan is designed to prevent the Supreme Court from "sliding down the slope toward turning into a nakedly political body. Every time there is a vacancy, the ideological stakes go up and it turns into this apocalyptic firefight. People are planning their retirements and maybe even planning their (deaths) just to make sure it happens during the right president.

"My marriage, the best and most important thing in my life, exists by the grace of a single vote on the U.S. Supreme Court," said Buttigieg, who is gay.

Buttigieg also addressed the idea of free college, a topic brought up often on the campaign trail. He said college needs to be more affordable, not free. He proposed increasing Pell grants and making them eligible to spend on living expenses, not just tuition.

He said students should have the opportunity to have loan debt forgiven through public service, a line that drew loud applause from the crowd.

A member of the audience asked Buttigieg where he stands on the topic of impeaching Trump. Buttigieg said politically, people have made up their minds, but "morally, it matters."

Following the forum, Buttigieg spent more than 30 minutes shaking hands and taking selfies with supporters, as 100 or more people lingered, trying to squeeze closer to him.

Outside the arena, vendors sold "Pete 2020" buttons, stickers, T-shirts and other regalia, while several people took photos in front of Buttigieg's blue and yellow "Pete for America" touring bus before leaving for its next destination.

With less than two weeks before the Oct. 8 primary election, the six candidates seeking Davenport’s top elected spot introduced themselves to …

Democratic presidential candidate and South Bend Mayor Pete Buttigieg speaks during the “Leading the Nation — Iowa 2020” forum as part of a series organized Quad-City Times, Quad-Cities Chamber of Commerce and St. Ambrose on Tuesday at Lee Lohman Arena in Davenport.