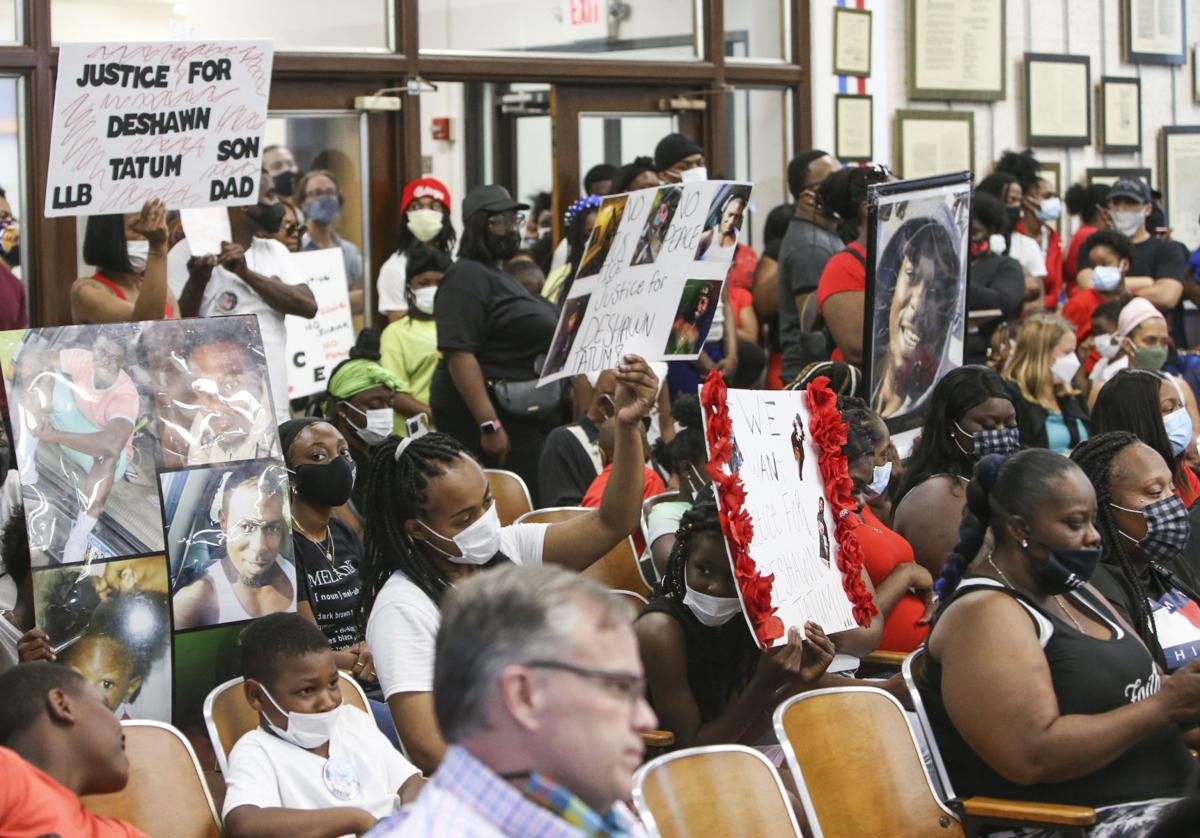 Community members gather inside of Rock Island City Hall during the Rock Island City Council meeting on Monday to protest the police officers who were involved in the fatal shooting of DeShawn Tatum on April 1. 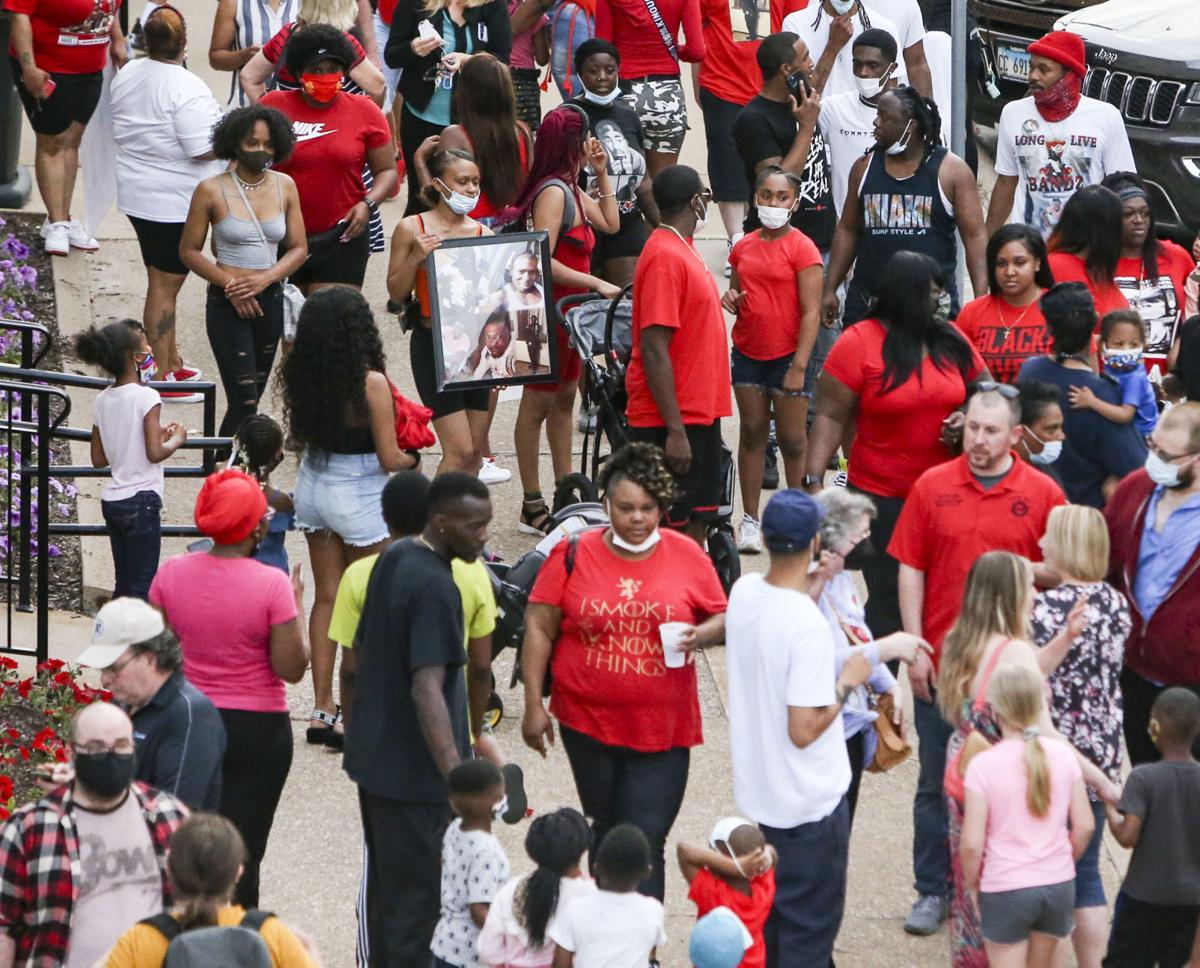 Community members gather outside of Rock Island City Hall after a Rock Island City Council Meeting, Monday, May 24, 2021, they group was their to express their thoughts on the officers involved in the fatal shooting of DeShawn Tatum on April 1 and the officers that protested comments made by Alderman Dylan Parker. 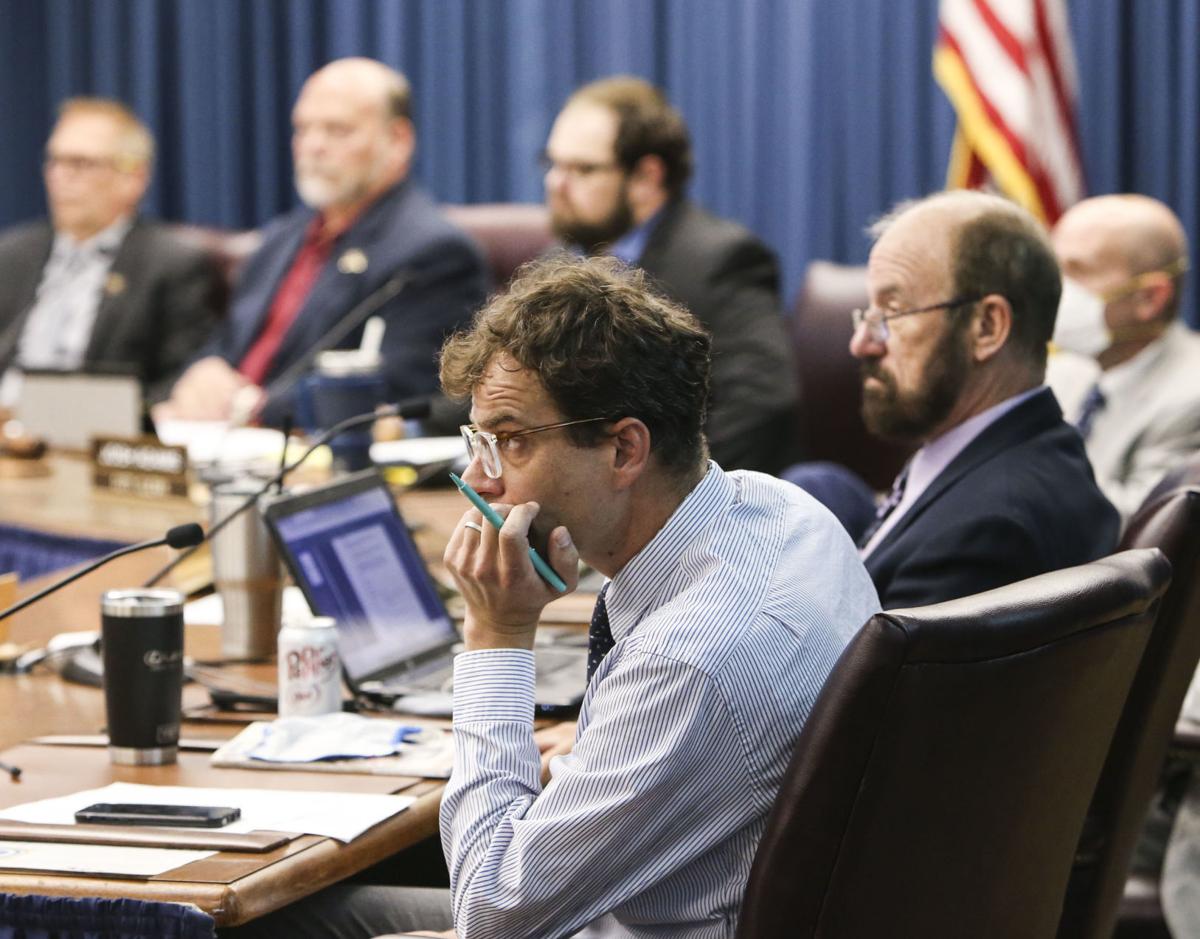 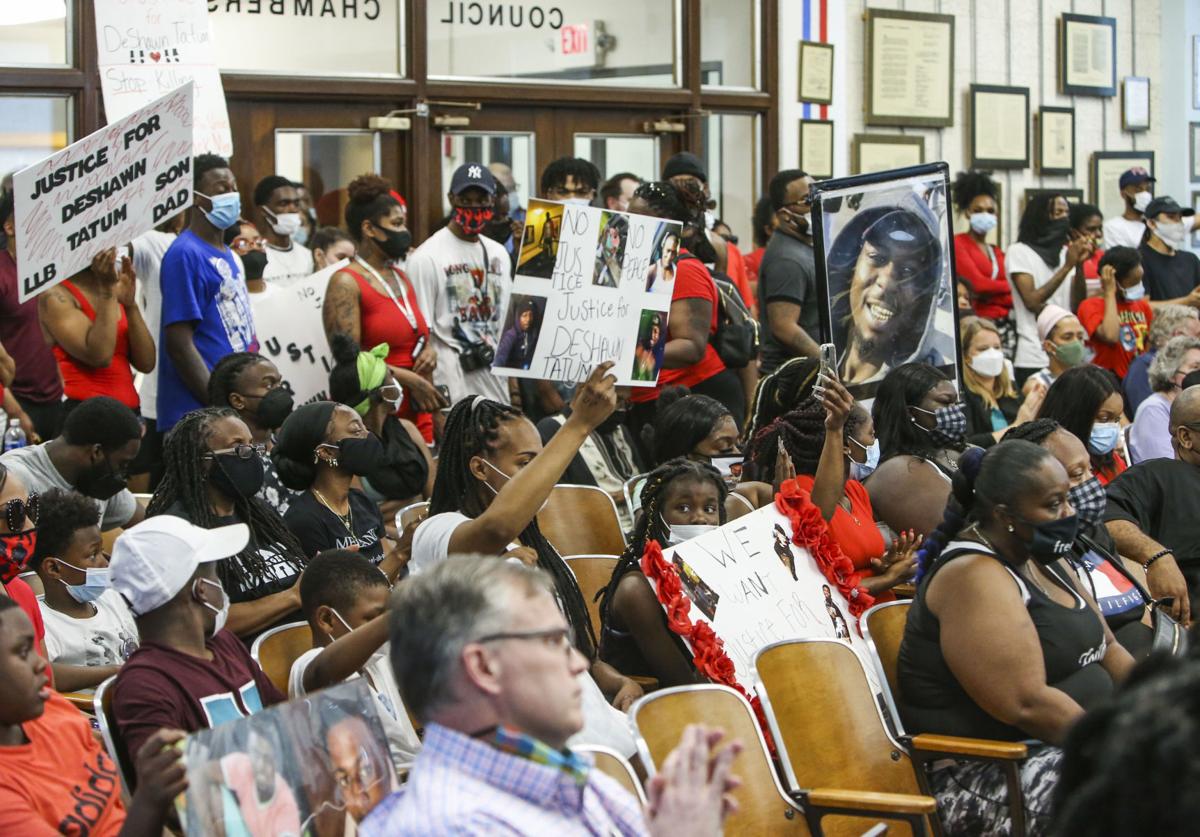 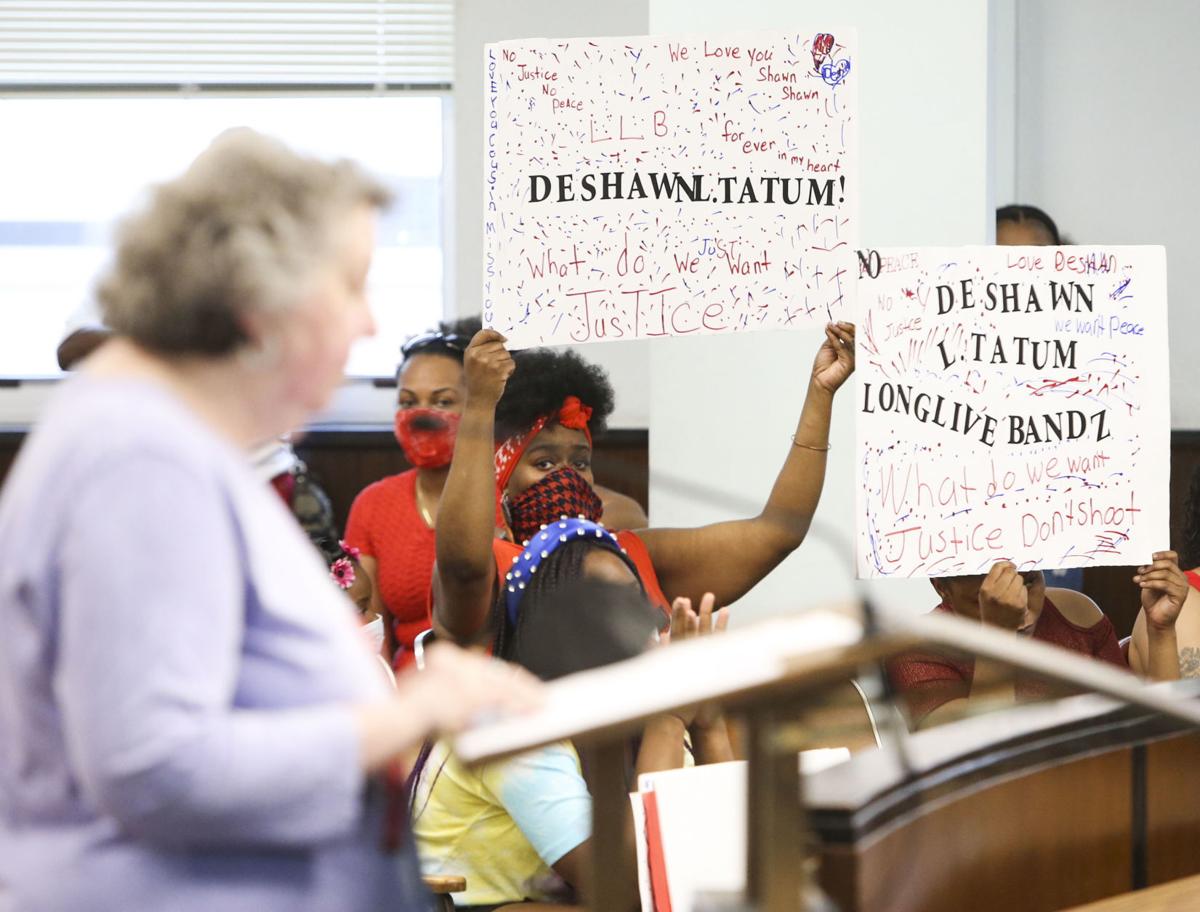 A street protest against the April 1 shooting death of DeShawn Tatum carried into Rock Island City Hall Monday night as a large group of friends and family members carried signs reading "We want justice for DeShawn" and "Hands up, don't shoot," accompanied other signs with Tatum's photos and those of his children.

The protest came the night before the first anniversary of the death of George Floyd, the Black man killed by a Minneapolis police officer.

It was standing room only in Rock Island Council chambers as public comments lasted nearly 40 minutes. Residents spoke out against Tatum's April 1 shooting death by Rock Island police and in support of Alderman Dylan Parker, Ward 5.

Parker was the focus of a protest by more than 50 police officers during the May 10 council meeting after he referred to police as "agents of state violence" and asked the city to consider a foot pursuit policy when Rock Island County State's Attorney Dora Villarreal ruled Tatum's shooting justified.

Former mayoral candidate Thurgood Brooks demanded council members form a community commission within 60 days, picking up where he and other activists left off last summer after talks with police to improve community relations broke down.

"The substance of Mr. Parker's remarks that we should ask about the policy in search of answers for the problems we have in Rock Island, as anywhere in the country, is that we have a deep mistrust between the community and police," Brooks said. "Every time someone gets hurt, mistreated or killed, whether that's a police officer or a community member, that mistrust deepens.

"We must ask questions and listen to input, even if that input is uncomfortable and goes against our grain. Only if we ask new questions, can we hope to find new solutions. Old solutions are clearly not working. Or else, the situation would have been fixed already. And it's only getting worse."

Brooks said the May 10 council meeting should have been a "joyous occasion" as three new alderman and Thoms were sworn in.

"But instead, we had roughly 50 uniformed police officers show up to silently protest — yet loudly, I would say — protest the thought of merely asking questions."

Brooks' comments were often punctuated with bursts of applause from the crowded room.

Brooks criticized VenHuizen for allowing the officers to wear their uniforms while off duty to the council meeting and criticized City Manager Randy Tweet, as VenHuizen's supervisor, for allowing it to happen.

"What has the city manager done to hold the chief accountable for the flawed leadership he showcased?" Brooks said. "Our police chief, by his actions, not his words stating it wasn't a protest, has stated that he is leading with an 'us against them' energy within our police department.

"I find this to be borderline an abuse of power and quite frankly, encouraging bully behavior."

First Ward resident Kelly Kruse said she was "really disappointed" when she heard about the police protest at the May 10 meeting.

"I think it's totally normal that an alderman would bring up, can we change the rules," Kruse said. "I don't think there was anything unprofessional about that. I would expect that.

"I was really disappointed to see the police reaction to that was to come and just stand there with their uniforms, their guns and tasers. I think it was unfortunate it was the day a couple people were to be sworn in. It was a silent 'we're here and we're watching you.' It's not a good look. To me, I didn't see it as a protest so much as a tantrum.

"If you can't handle it, maybe you should think about getting another job,"

Tim McGuire also spoke out in support of Parker.

"Dylan is a friend to the Rock Island Police Department and in my opinion, Dylan has shown a lot of courage these past few weeks," McGuire said.

"I was disappointed by the city council and by the police department," said Bridget Ehrmann. "The way this situation unfolded two weeks ago was disappointing. We all are here because we care about our community."

Tamara Felden said the police made a mistake by showing up in force.

"Rather than making the entire controversy that erupted about four words, let's make it about the larger goal at stake," Felden said. "I ask everyone here to unite rather than to divide."

How inhaling ozone harms your health

How inhaling ozone harms your health

Rock Island city officials have agreed to look into a foot pursuit policy for the police department.

Former Rock Island mayoral candidate Thurgood Brooks is asking the city form a police community relations commission to help ease tension between the police and minority communities, but grant broad oversight of the police department at the same time.

Community members gather inside of Rock Island City Hall during the Rock Island City Council meeting on Monday to protest the police officers who were involved in the fatal shooting of DeShawn Tatum on April 1.

Community members gather outside of Rock Island City Hall after a Rock Island City Council Meeting, Monday, May 24, 2021, they group was their to express their thoughts on the officers involved in the fatal shooting of DeShawn Tatum on April 1 and the officers that protested comments made by Alderman Dylan Parker.