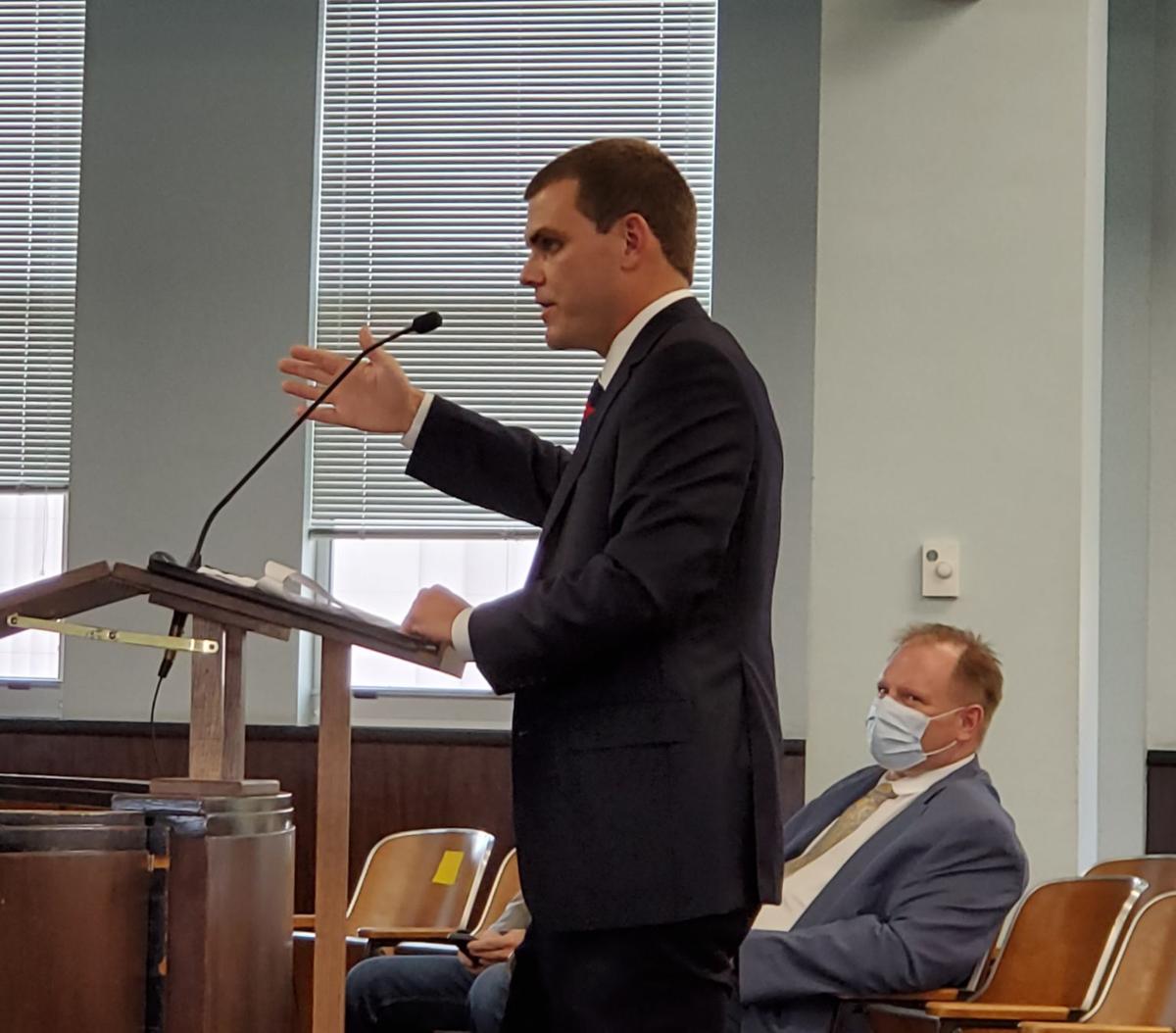 Brendan John, program manager of The Sedona Group, gives a presentation to Rock Island city council members on Sept. 13, 2021, hoping to win a contract to help guide the city on how to spend $27.5 million in American Rescue Plan Act funds. 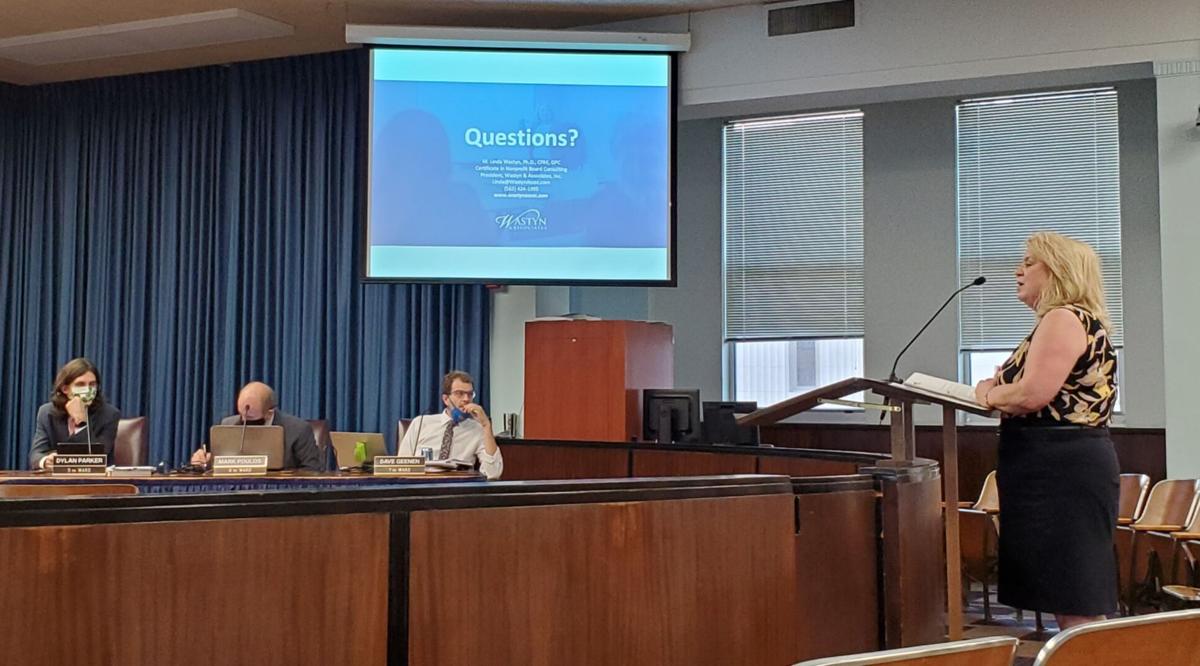 Linda Wastyn, president of Wastyn & Associates, gives a presentation to Rock Island city council members on Sept. 13, 2021, hoping to win a contract to help guide the city on how to spend $27.5 million in American Rescue Plan Act funds.

The Sedona Group and Wastyn & Associates gave competing presentations during the council's study session, as both companies promoted their ties to the community and ability to help decide which projects, businesses or people should receive funding.

"We have an ability to identify key needs of the city and target communities that have been severely impacted by COVID-19 and help them rebuild," John said. "It keeps our risk management costs at a reasonable level and allows us to leverage our relationships within the community."

John said The Sedona Group would provide the city with advisory services, leadership and operational understanding, noting the company had worked on projects that had allocated more than $18 billion in federal funding to local communities in disaster recovery.

"The primary benefit of using a company like ours is we have the capability and flexibility in adapting federal (funds) to the needs of Rock Island," he said.

John said The Sedona Group would solicit public feedback and "bring the community on board to decide how to spend this money."

Mayor Mike Thoms said nine companies submitted bids to the city, with estimates ranging from hundreds of thousands of dollars to more than $1 million for the contract. Those nine were narrowed to Sedona Group and Wastyn & Associates.

Thoms said some of the bids gave him "sticker shock" and that whoever is chosen should expect to negotiate on services and pricing.

Municipalities are restricted from using ARPA funds to pay down debts, supplement pension funds or use it to offset tax cuts. Funds must be spent or allocated by the end of 2024.

Linda Wastyn, president of Davenport-based Wastyn & Associates, said her expertise was in grant writing and fundraising. Her company has completed similar projects for the Iowa Department of Cultural Affairs, Komen Quad Cities and the city of Bettendorf.

Wastyn said she would approach the project with a focus on communications by identifying community needs through a series of listening events and surveys.

"We need to develop a fair, open and equitable process," she said. "The goal in the RFP stated that you want to transform Rock Island. You want to make sure that in four years when this money is gone, you have a very different Rock Island than you do today.

"We have to clarify what are the city's aspirations; where do you want to be in four years? It's an exercise in focusing on where you want to be."

Wastyn said it would be her job to ask the questions, bring data and move the planning forward.

"Twenty seven million is a lot money; but it's not a lot of money when you look at what all the needs are," she said. "At the end of this, we'll have the strategic goals that will drive your plan and help determine what this process will look like."

Davenport will hire consultants for 'talent development'. Here's why

The Federal Office of Personnel and Management approved a 25% retention pay increase for all officers and staff at USP Thomson in an effort to keep the prison from losing employees.

Rock Island city council members met Monday night for a planning session to conduct an analysis of strengths, weaknesses, opportunities and threats to the city, naming the loss of residents and difficulty in filling city positions as some of the city's weaknesses.

At 88, Grassley says he's got another run in him as he announces reelection bid

Grassley, 88, the longest-serving Republican in the Senate, announced Friday he will seek re-election to an eighth term.

Iowa Women United will hold public forums, beginning Thursday, to discuss changes in Iowa voting laws and to give voters an opportunity to mee…

Once the target of vandals and squatters, the former Blackhawk Foundry in west Davenport is being revitalized

The city of Davenport purchased and is in the process of redeveloping the former Blackhawk Foundry & Machine Co. site at 323 S. Clark St.

Brendan John, program manager of The Sedona Group, gives a presentation to Rock Island city council members on Sept. 13, 2021, hoping to win a contract to help guide the city on how to spend $27.5 million in American Rescue Plan Act funds.

Linda Wastyn, president of Wastyn & Associates, gives a presentation to Rock Island city council members on Sept. 13, 2021, hoping to win a contract to help guide the city on how to spend $27.5 million in American Rescue Plan Act funds.