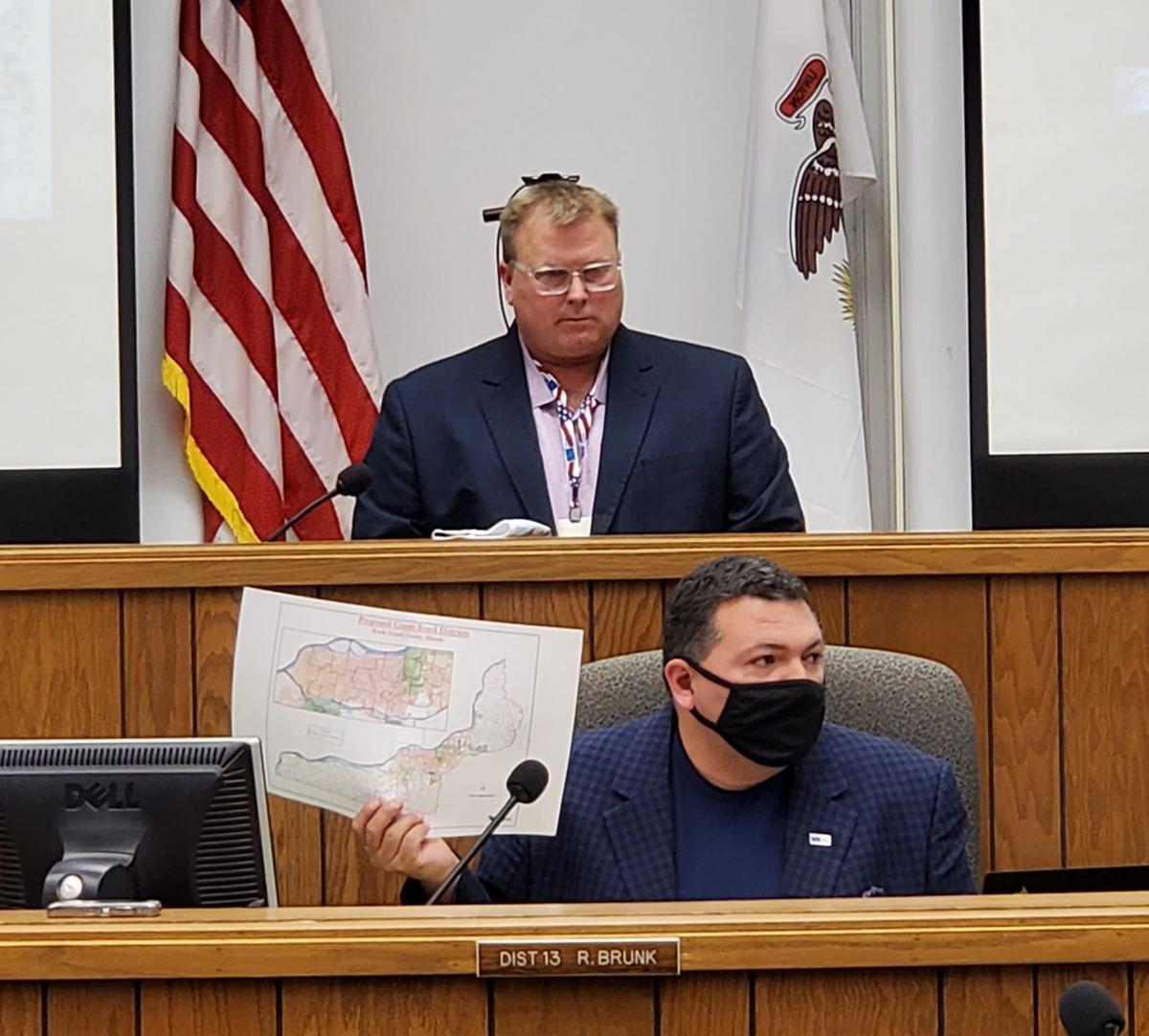 Rock Island County Board Chairman Richard Quijas Brunk, bottom, holds up the proposed maps during the county board meeting on Tuesday as Jeff Deppe looks on. Board members voted 17-4 to approve the maps, downsizing the board from 25 to 19 member districts. 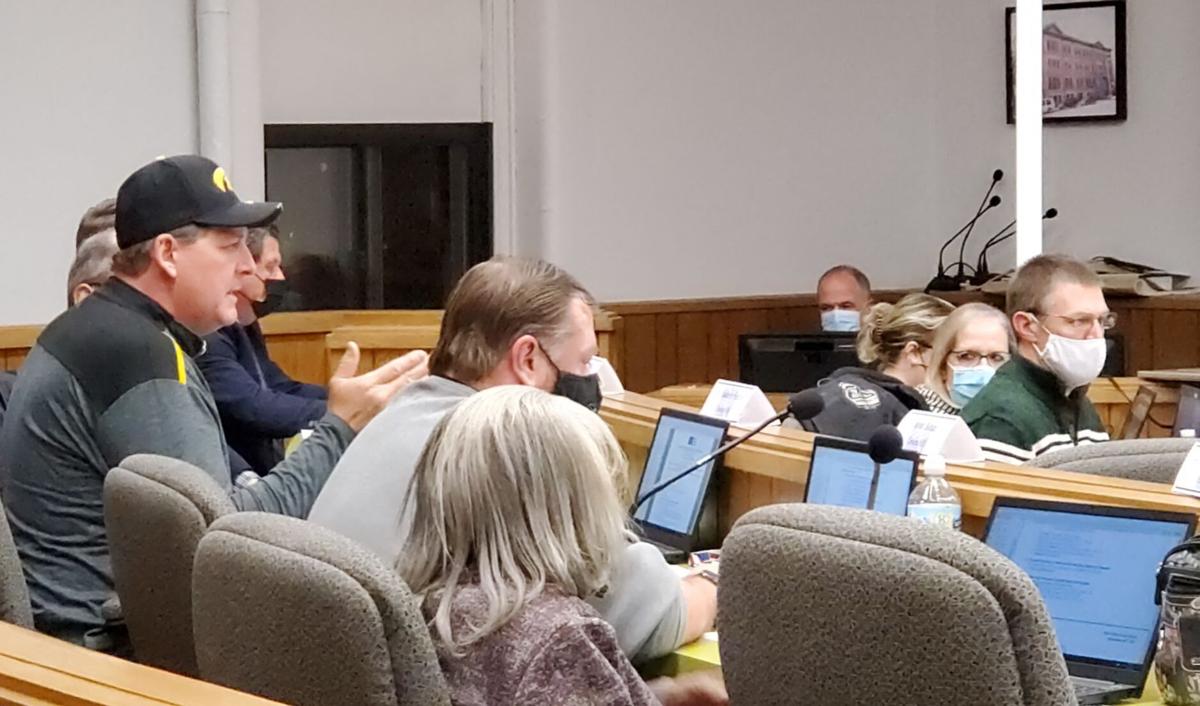 County board member Rodney Simmer, far left, argues about the fairness of newly proposed maps during the Nov. 16, 2021 meeting. Board members voted 17-4 to approve the maps, downsizing the board from 25 to 19 member districts. Simmer; Rich Morthland, District 1; Dewayne Cremeens, District 2; and Robert Westpfahl, District 25; all voted against the new maps.

It's an issue that's been debated and promised since late board member Don Johnston made the first motion to downsize the county board 10 years ago, with the 2010 Census.

"The way this map is presented, there's no way it's fair to the rural areas," Westpfahl said. "These are supposed to be fair-and-just maps, and they're not fair. We'll be stuck with this map for the next 10 years. It's got to be fair, and it ain't fair. Therefore, I will not support it."

Simmer referred to a letter the Farm Bureau sent to board members that took issue with the lack of rural representation.

"Is there a statute that requires numbers to be as identical as possible?" Simmer said. "It almost looks like those Little League maps; you go to this block to get this kid and this block ... you know, mine (district) really is crazy. I don't care as far as myself, but the representation of the next person may not be as fluid between the city and rural area."

Board members voted in April to reapportion the districts and in May approved a contract with Berteau Consulting LLC and Grapple LLC at a cost of $23,000 to redraw the districts.

Consultant Josina Morita of Grapple LLC said emphasis was placed on maintaining minority and rural representation during the reapportionment, with each district gaining about 1,713 people, going from an average of 5,902 residents to 7,556.

Morita said there were requests to maintain municipal and township boundaries.

"It was an explicit goal to draw three rural districts, and that is what we tried to do," Morita said.

"I thought my (district) was way out of sorts," Simmer said. "It looks crazy how it goes out and around; it looks obnoxious."

Kai Swanson said whoever was elected to represent each new district would have to expand their representation.

"I think we have to accept the fact that no one is going to get the map they 100% want, and that's OK," Swanson said. "So I speak in favor of the motion."

Luis Moreno thanked the consultants for their work in putting the new maps together.

"I do not see any gerrymandering," Moreno said. "I see a company that tried to do their best and did it based on what their parameters are."

"I think we did a great job of protecting the interests of our Black districts, our Latino districts and our fire districts," Deppe said.

The final map must be submitted to County Clerk Karen Kinney by the end of December.

The new districts will take effect with the November 2022 election, with all board members having to run for reelection at that time. If there is more than one party candidate per district, the primary election will take place June 28.

Rock Island County board member Kai Swanson argues in support of the 19 newly drawn districts during the Nov. 16, 2021 board meeting.

Wallace is the fourth Democrat to launch a campaign for the seat of outgoing U.S. Rep. Cheri Bustos, D-Moline, who said in April she would not seek a sixth term in Congress.

Rock Island County board members got their first look at newly proposed maps Thursday as they prepare to downsize from 25 to 19 districts.

Rock Island County board approves 2022 budget with no tax increase, but a $13 million shortfall

Board members on Tuesday approved the budget and levy ordinance by a vote of 19-2. Lauren Boswell-Loftin and Robert Westpfahl opposed.

Rock Island County has received an increase in its credit rating from Moody's Investors Service, bumping the county's score from A3 to A2.

Rock Island County Board Chairman Richard Quijas Brunk, bottom, holds up the proposed maps during the county board meeting on Tuesday as Jeff Deppe looks on. Board members voted 17-4 to approve the maps, downsizing the board from 25 to 19 member districts.

County board member Rodney Simmer, far left, argues about the fairness of newly proposed maps during the Nov. 16, 2021 meeting. Board members voted 17-4 to approve the maps, downsizing the board from 25 to 19 member districts. Simmer; Rich Morthland, District 1; Dewayne Cremeens, District 2; and Robert Westpfahl, District 25; all voted against the new maps.