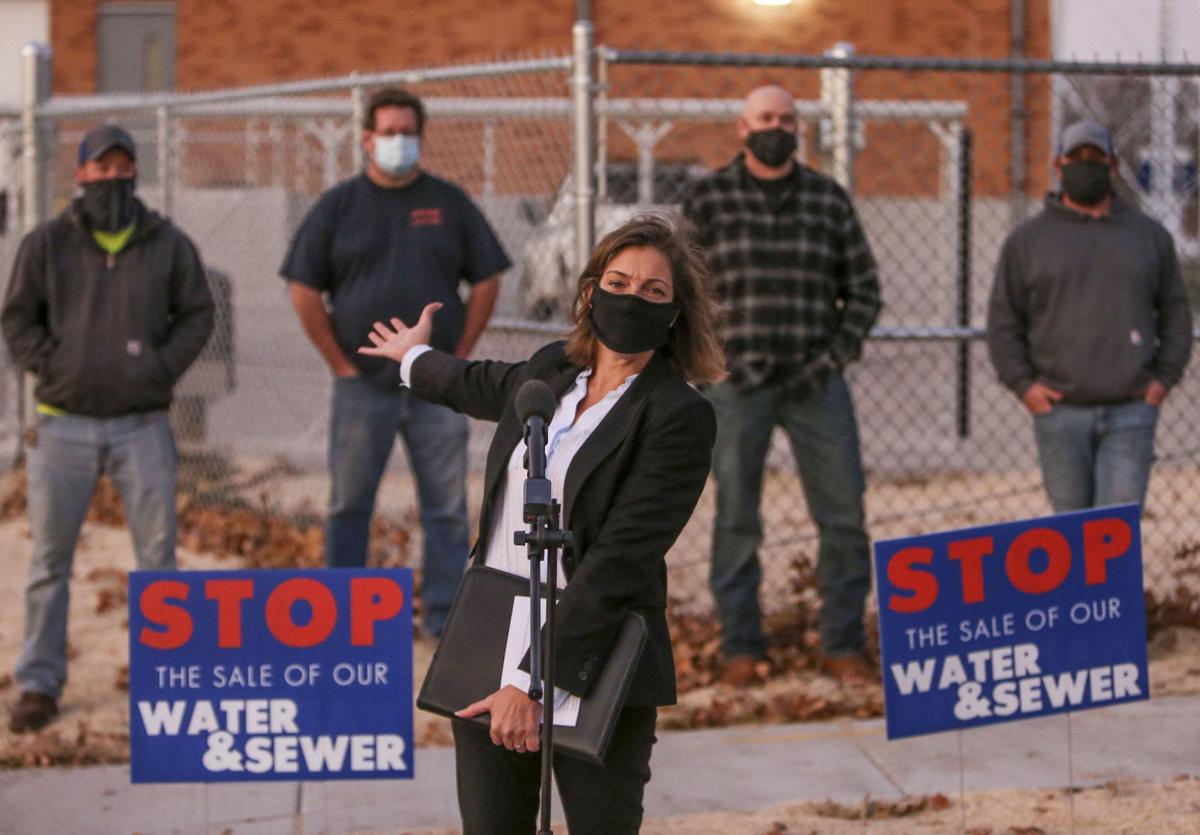 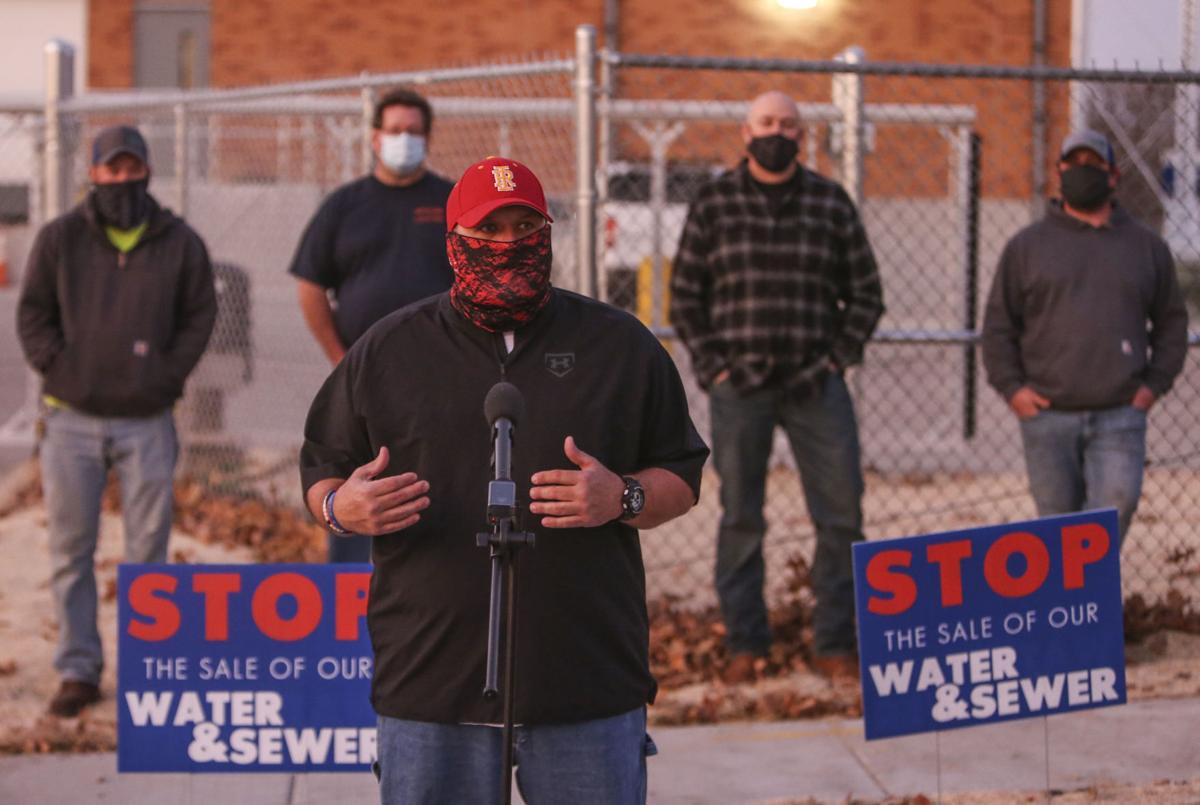 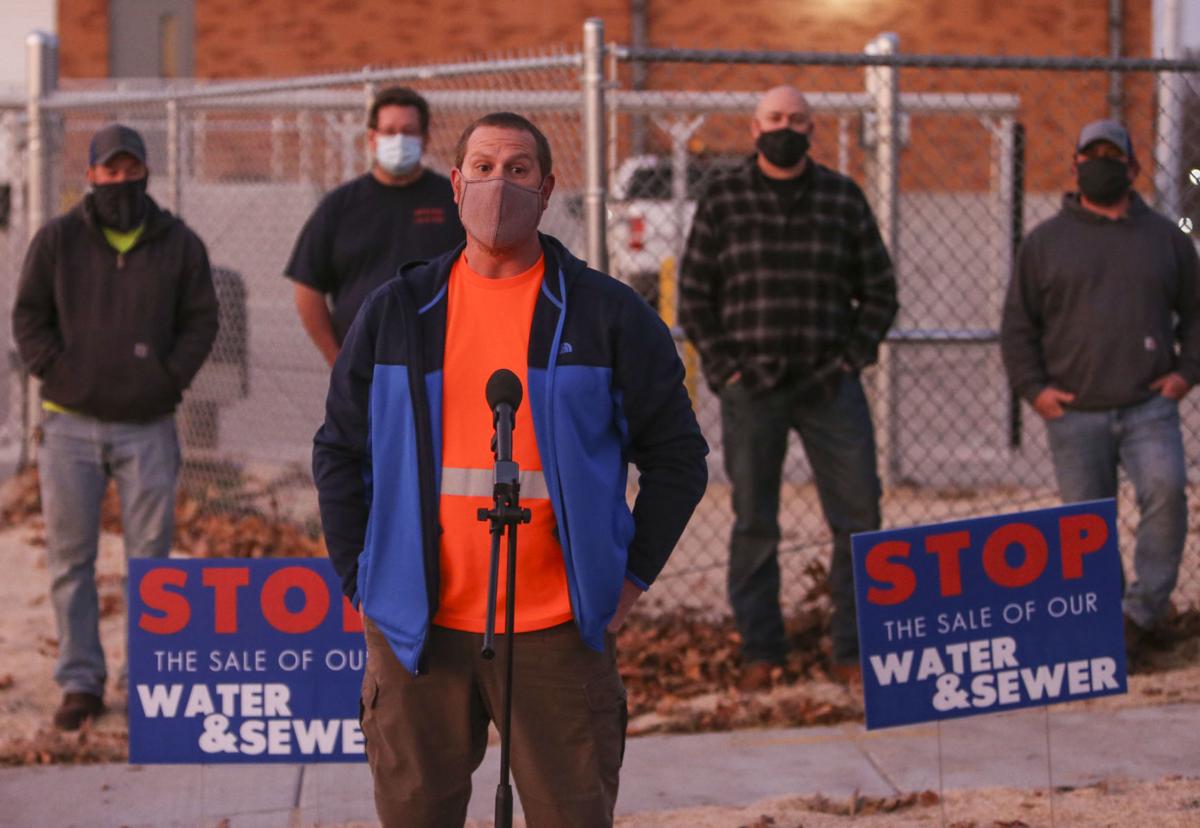 Rock Island public works employees are alarmed by discussions the city is having with Illinois American Water to explore selling off the city's water service and water treatment facility.

During a press conference Thursday evening in front of the water plant, 2215 16th Ave., a dozen AFSCME Local 988 employees gathered to voice their concerns about what may happen if the city sells to a private company.

"That was alarming for us because we didn't know things had progressed to that level, but they had," Schmidt said. "We are here to ask the city council to commit to keeping the water and sewer public. Keep it under local control; don't sell it. We are concerned about it."

"For the sake of the citizens, especially individuals who can't afford higher rates in this town, it can negatively impact their personal economy," Hartman said. "On a personal note, this would affect our retirements and possibly our benefits and wages. I think it would be a detriment to the city if we were to lose nearly 400 years of (combined) experience on a system. We understand how to take care of it better than a private industry would if they came in to make a profit."

Sandy O'Neill, who has worked as a chemist at the water plant for 33 years, thinks the city should let residents decide if they want to sell the water service and facility by placing a referendum on the ballot in the April 6 municipal election.

Mayor Mike Thoms said Illinois American Water approached the city about a year ago and made a presentation to city staff and council members during the Feb. 24 study session.

"We are not selling at this point. We are investigating whether we want to privatize the water and sewer," Thoms said. "We've given (Illinois American Water) data so they could put some numbers together. But, we are a public entity, so we have to put it out for (RFP) bid. We can't just sell it without bidding it. We don't even have an idea whether that is the route we want to go.

"The city council has not talked about it formally in any council meetings, so it's a ways down the road even if it's considered, let alone done," Thoms said. "Are we talking about it? Yes — investigating what are the pluses and minuses and getting it appraised."

Thoms said if the city sells, the benefit will be an immediate infusion of money for the cash-strapped city, making it possible to pay off bond debt and keep property taxes steady.

A downside to selling would be the possibility of higher water and sewer rates because the city would no longer have control. Another disadvantage is if a water line breaks, it could take longer to get it fixed because the water department would not be part of the city's public works department, Thoms said.

"We've been very, very transparent and open about this," Thoms said. "We are investigating what the advantages and disadvantages would be and what it's worth. We could get to a year from now and find out it doesn't make sense."

Thoms said city leaders also have been reaching out to other cities that privatized with Illinois American Water to ask them about their experiences and if it's worth it.

Illinois American Water issued a statement Thursday after being notified of the press conference. Terry Mackin, director of communications, said the company serves more than 130 communities in the state and recently purchased the wastewater system of Jerseyville, Ill.

"We are interested in continuing discussions about a potential partnership with the city of Rock Island; that is where it stands today," Mackin said. "Discussions continue, with a focus on solutions for the community, short-term and long-term. Throughout this process, Illinois American Water has been open and transparent."

When company representatives met with water plant employees Oct. 30 to discuss the company's benefits package and approach to union labor, Mackin said, "It was a positive, informational meeting," and noted more than 300 of Illinois American Water's 450 employees are represented by a union.

Mackin said if the company ends up buying the city's water service and facility, no employees will lose their jobs.

"There are many advantages to considering Illinois American Water to be Rock Island’s community’s partner," Mackin said. "We look forward to being transparent and having additional positive discussions with the mayor, council members, employees and local labor leaders."

Rock Island City Council members advanced a proposed 6.24% increase for the city's portion of property taxes in the 2021 budget by holding a t…

The city of Rock Island has reversed course and will not increase the tax rate after proposing a property tax hike of 6.24% last month.

Quad-City municipal offices have people out with COVID-19, but so far, impact is minimal

With cases spiking and hospitalizations surging in the Quad-Cities and across the Midwest, hospitals and schools are not the only ones struggl…

Because the proposed tax increase is more than 4.9%, a public hearing will have to be held.