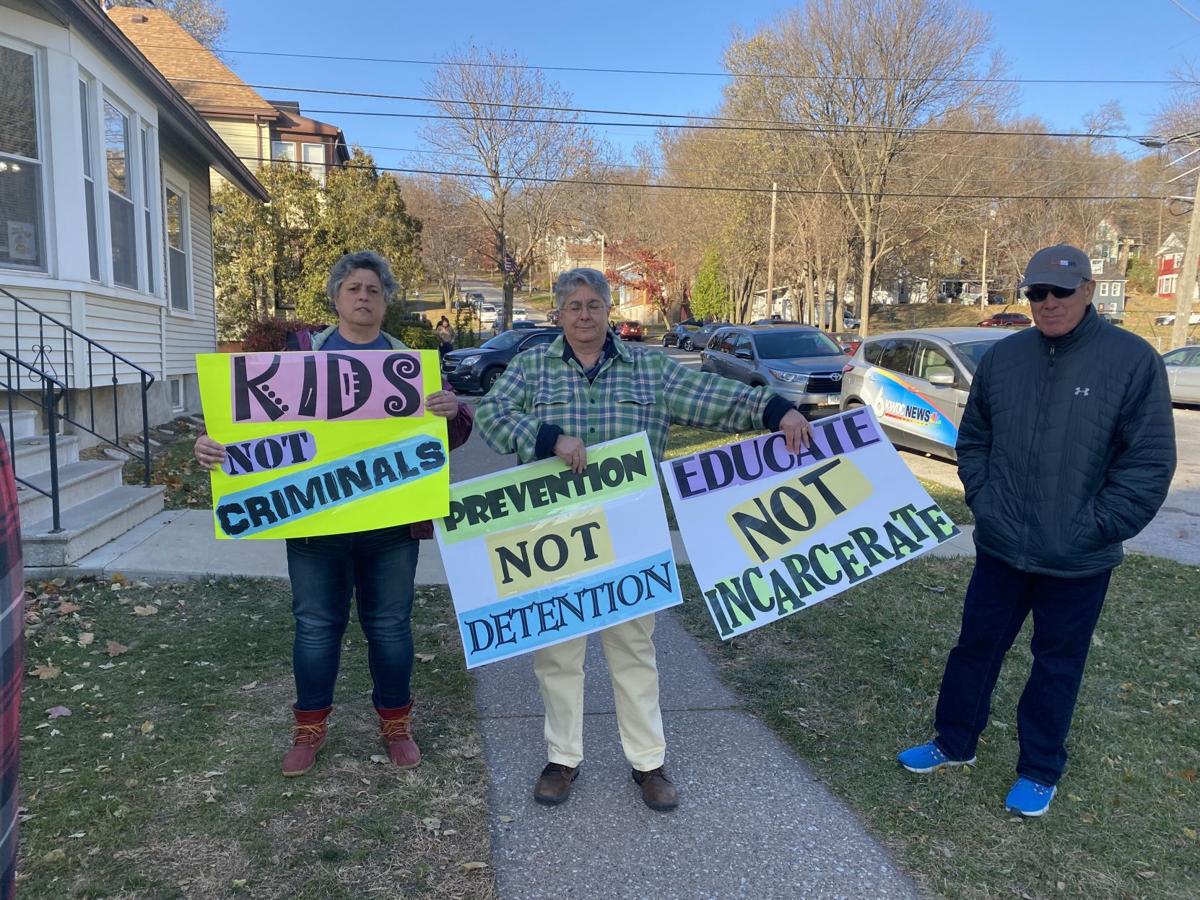 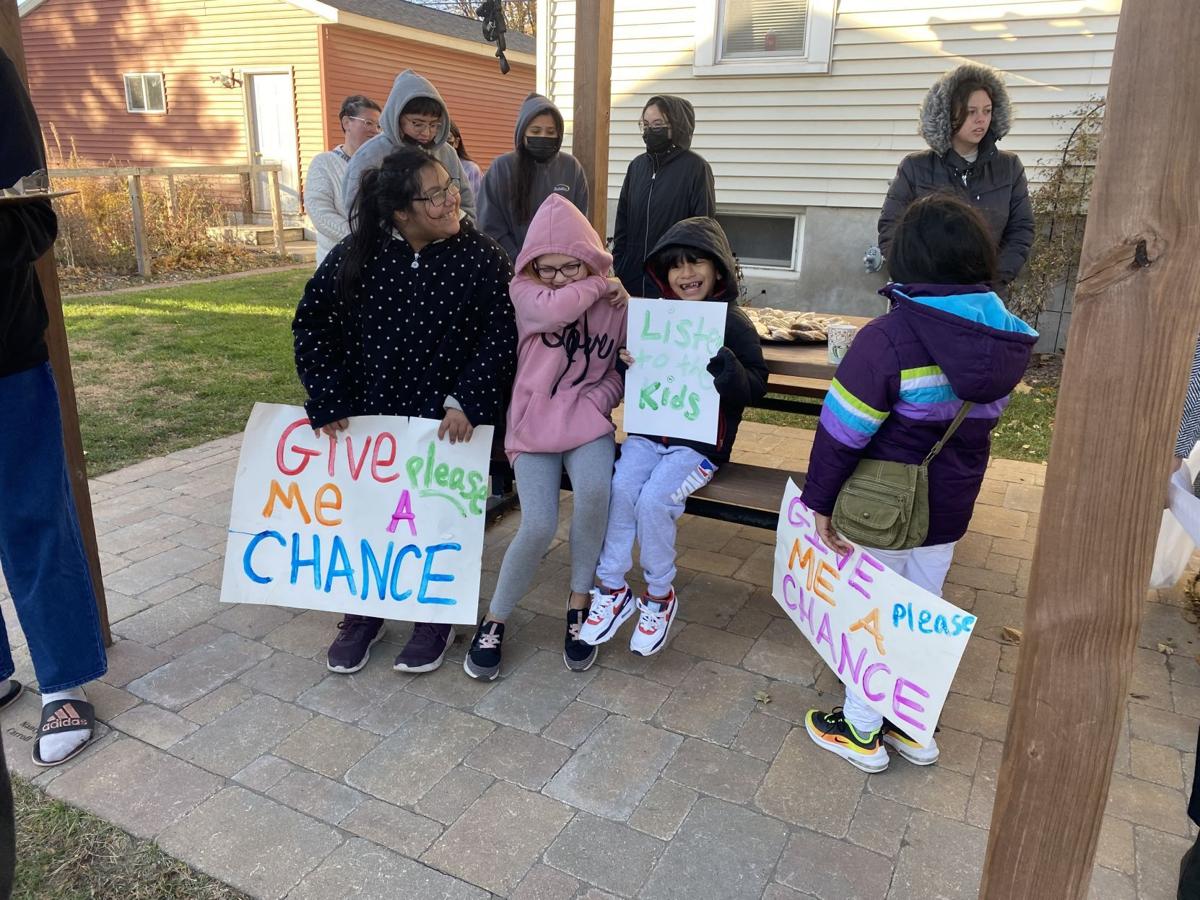 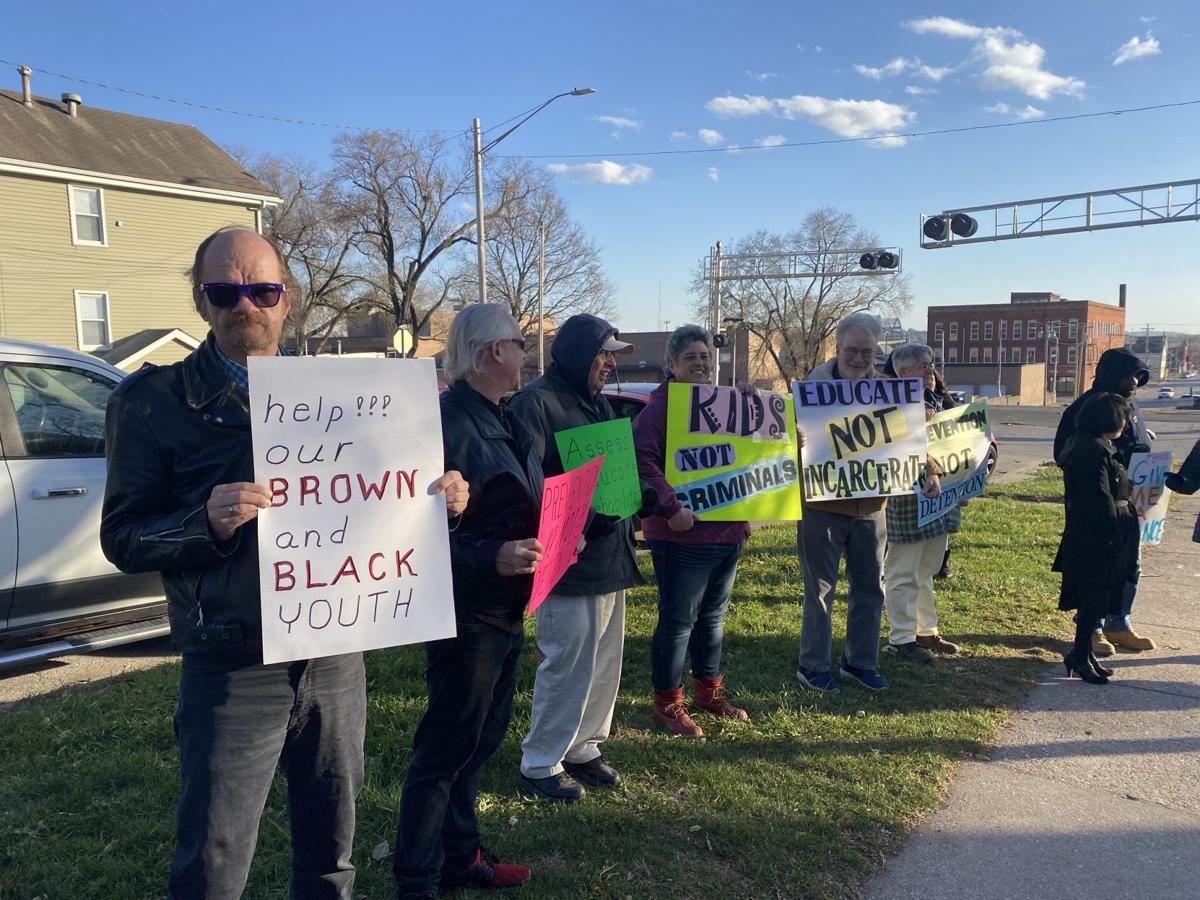 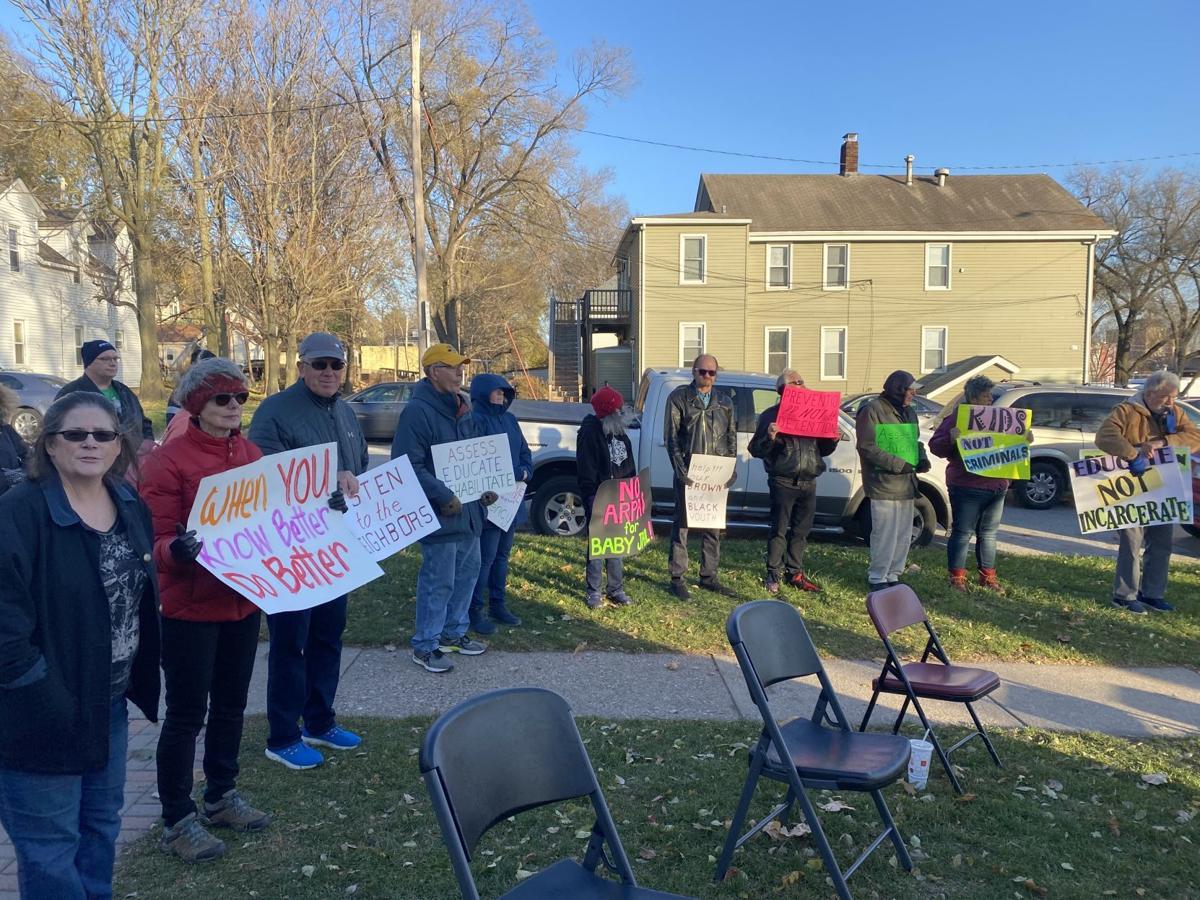 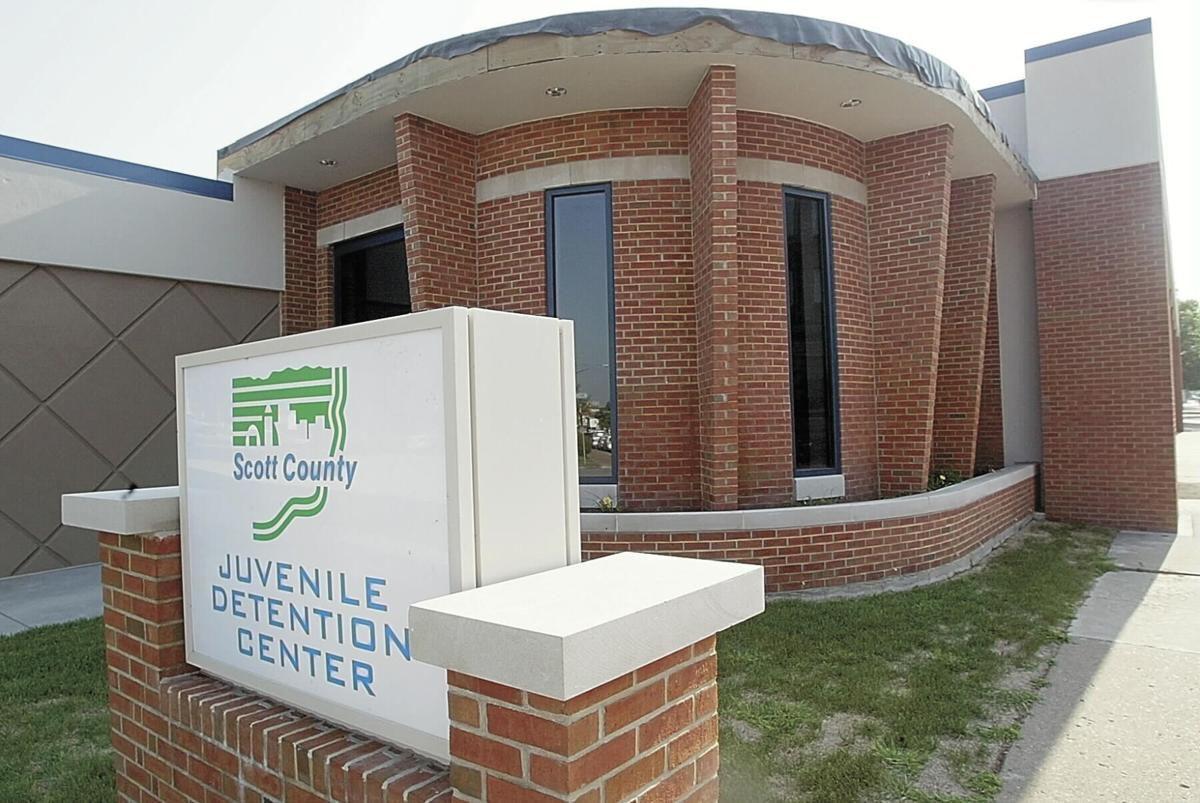 Protesters gathered Sunday in downtown Davenport in opposition to plans to build a larger Scott County juvenile detention center, with youth holding signs that read "Please, give me a chance" and "Listen to the kids."

"While jail is needed for serious, bad people, kids are still learning and growing," said 10-year and Jefferson Elementary School fifth grader Shariya McLemore. "We need chances and leaders to show us how to become successful; not jails that leaders can throw us into when we mess up. I do not support the expansion of the detention center. And instead, I know the money should be invested in building a better community for our Black and brown families."

The Scott County Board of Supervisors is scheduled to meet Tuesday and be presented with designs for a new, 40-bed Youth Justice & Rehabilitation Center that would more than double the current licensed capacity of 18 beds. 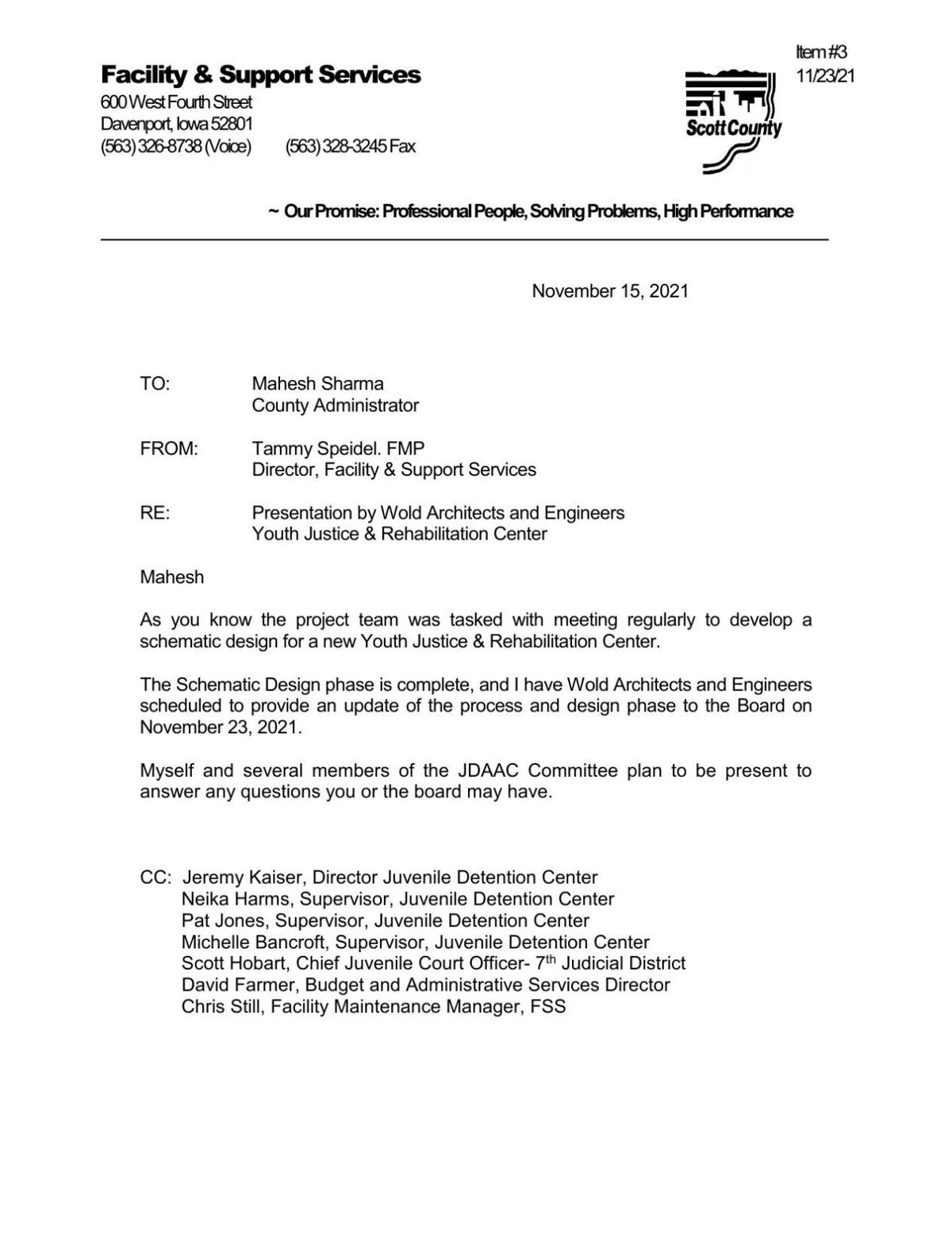 The proposed Youth Assessment Center would provide a law enforcement-based crisis care and drop-off center for delinquent and run away youth, according to plans posted on the Scott County website.

Instead of local youth picked up by law enforcement immediately moving into the juvenile justice system, they would first come to the center where an assessment would be conducted of the juvenile and his or her family.

The thought is to keep as many juveniles as possible out of the justice system, and divert them and their families instead into programs to diagnose and address underlying causes of delinquent behavior.

Critics have argued such a center should be a stand-alone facility, and that co-mingling an assessment center with a detention center raises concerns over due process and fueling over-representation of minority youth in the juvenile justice system. They worry juveniles, who would otherwise be treated differently, would be brought to assessment centers and then become entangled with juvenile justice under the guise of getting help. In such instances, a system designed to divert juveniles from the criminal justice system, then has the opposite effect by bringing more juveniles into the system.

Scott County supervisors have discussed using up to $10 million in federal COVID-19 rescue dollars to pay for the larger facility, which the head of a state juvenile justice planning agency and a national expert have said is unnecessary and out of step with national trends and best practices that have focused on reducing youth incarceration and the harm it poses.

Over the past five years, Scott County has housed an average of roughly 25 juveniles per day between the jail and juvenile detention center, with peaks of up to nearly 40 juveniles, according to Scott County JDC figures.

County officials also face a Dec. 18 deadline under a state and federal mandate that any youth awaiting trial as an adult, with limited exceptions, be removed from jail, necessitating further need for more space, JDC Director Jeremy Kaiser has said. The Scott County Jail has housed an average of 10 juveniles per day over the last five years, with peaks of up to 16 juveniles.

When the JDC reaches capacity, the county must spend money to house youths in facilities in other counties, separating them from their families and local support systems.

Scott County officials, too, argue the youth detention facility — built in 1980 and subsequently expanded in 1987, 1994 and 2003 — is outdated and not conducive to treatment or rehabilitation; nor is it therapeutic or trauma-informed. Space constraints also limit detention staff's ability to properly classify and separate juveniles based on the severity of their offense.

While recognizing the county’s need to replace its outdated youth detention, Avery Pearl with QC Community Advocacy Network, contends a 40-bed facility is unneeded. Pearl and other critics argue youth incarceration numbers have dropped from a spike in 2019, thanks in part to the success of diversion programs.

'Adding fuel to this forest fire'

For the fiscal year ending June 30, 2020, 70% of youth detained were Black, according to the detention center's most recent annual report.

"Many of these disparities are the results of systematic racism in the education system," said Blackwell, who is studying to become an educator at Western Illinois University.

In the wake of Friday's verdict in the Kyle Rittenhouse case, Blackwell argued the nation needs to re-evaluate the "way certain kids are seen as criminals in this society while others can do no wrong."

"Black and brown youth are taking harsher punishments in the education system than Kyle Rittenhouse is for killing people," Blackwell said. "The system is broken. From community dis-investment to criminalizing our kids, the system is rigged to fail our community and our youth."

She and other protesters who gathered Sunday at Project Renewal, 510 Warren St. in Davenport, said county officials should instead use federal funding to build capacity in existing neighborhood-based programs and work to empower under-served Black and Hispanic families, and invest more heavily in restorative juvenile justice, youth engagement and family resource programs.

"We need to enact programs that specifically help kids in the Black community," Blackwell said, many of whom have learning disabilities and struggle with poverty, abuse or neglect, but would benefit from additional educational and counseling services.

"Instead, they are criminalized, isolated, punished and pushed out," leading to the "disturbing percentage of Black children being detained and placed into the juvenile justice system," she said. "It is the No. 1 predictor, more than poverty, of whether children will drop out of school and walk down the road that included a greater likelihood of unemployment, reliance on social welfare programs and imprisonment."

"I am demanding we stop the expansion of the detention center, because it will only lead to furthering the damage that is being done to my families, friends and fellow community members," Phillips said. "If we do not stop the expansion and address our community's current juvenile justice crisis at its root causes, we will only be adding fuel to this forest fire."

Democratic Scott County Supervisor Ken Croken, a chief critic and the lone dissenting vote among county supervisors over plans to build a larger juvenile detention facility, accused county officials of "obscuring" plans for where they intend to build a new detention center.

Scott County officials have said expanding the existing facility is impractical, as it would require removing needed parking space for the jail and courthouse. Doing so would also require shutting down the facility to allow for renovations.

JDC Director Jeremy Kaiser and Scott County Board of Supervisors Chairman Ken Beck have said no decision has been made on where to build the proposed Youth Justice & Rehabilitation Center.

Supervisors and other county officials, however, discussed in closed session on Oct. 12 the possibility of using property the county intends on purchasing to expand the footprint of a planned detention center, according to minutes of the closed session provided by Croken.

County supervisors, with the exception of Croken, voted Nov. 9 to approve a $1.75 million purchase and lease agreement for property commonly known as Burke Dry Cleaners at 936 West Fourth St.

Scott County purchased a connected piece of property for about $325,000 in June that it uses to park county vehicles.

Asked by Croken during the Nov. 9 meeting how the county intended to use the additional property, Tammy Speidel, director of facility and support services for Scott County, said she anticipated the Burke Cleaners property would be used for additional parking as well as possible storage space for county road salt and "things of that nature."

"So it is not the intention to build a Juvenile Detention Center on this piece of property?," Croken asked.

Chairman Ken Beck responded: "I think that’s an unfair question to ask staff," and that "nothing’s been determined yet for that site."

"We need to do phase 1 and phase 2 (environmental site assessment), and then we’ll determine at that point what plans it has for the county in the future," Beck said.

Croken replied that, "The need for obscurity is not clear to me Mr. Chairman, and I think it’s disappointing to the public that we would not be forthcoming about our plans."

Construction of new juvenile detention space could now account for nearly one-third of the roughly $33.6 million Scott County will receive in …

How should Scott County address juvenile crime? Some say build a new detention center. Others advocate for more investment in rehabilitative services

Scott County officials say they face a pending "crisis" of running out of detention beds, while juvenile justice advocates point to a declinin…

From building larger detention space to repairing and improving storm sewers to helping those who are homeless, Scott County supervisors on Mo…