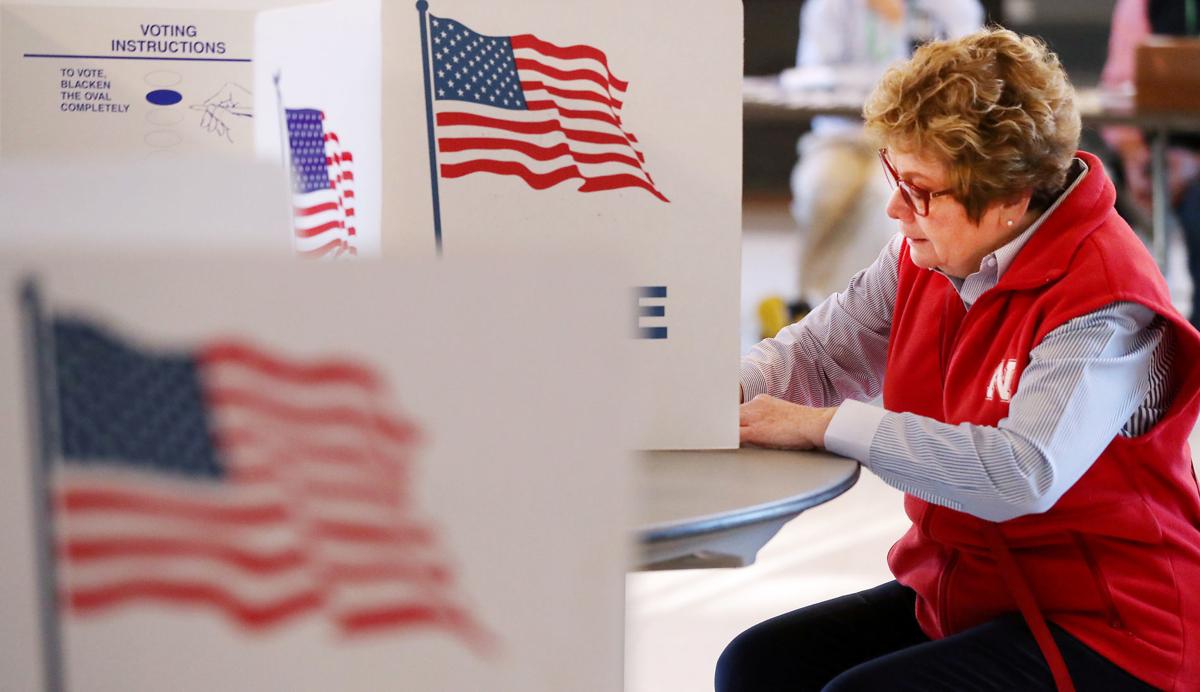 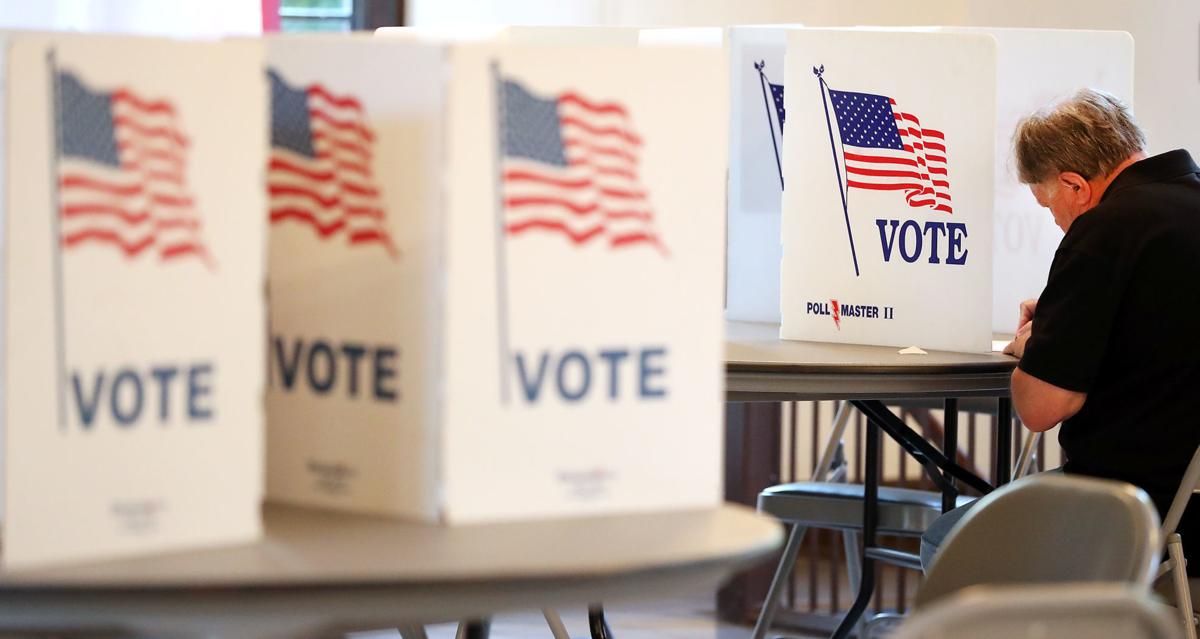 After casting her vote in Davenport's mayoral primary at the Duck Creek Park Lodge Theresa Bries continues on her bike ride Tuesday, October 8, 2019. The two candidates receiving the most votes will advance to a runoff election on Nov. 5. The six running for mayor are: Steve Duffy, Mike Matson, Dan Portes, Rita Rawson, Elizabeth VanCamp and Dean Weber. 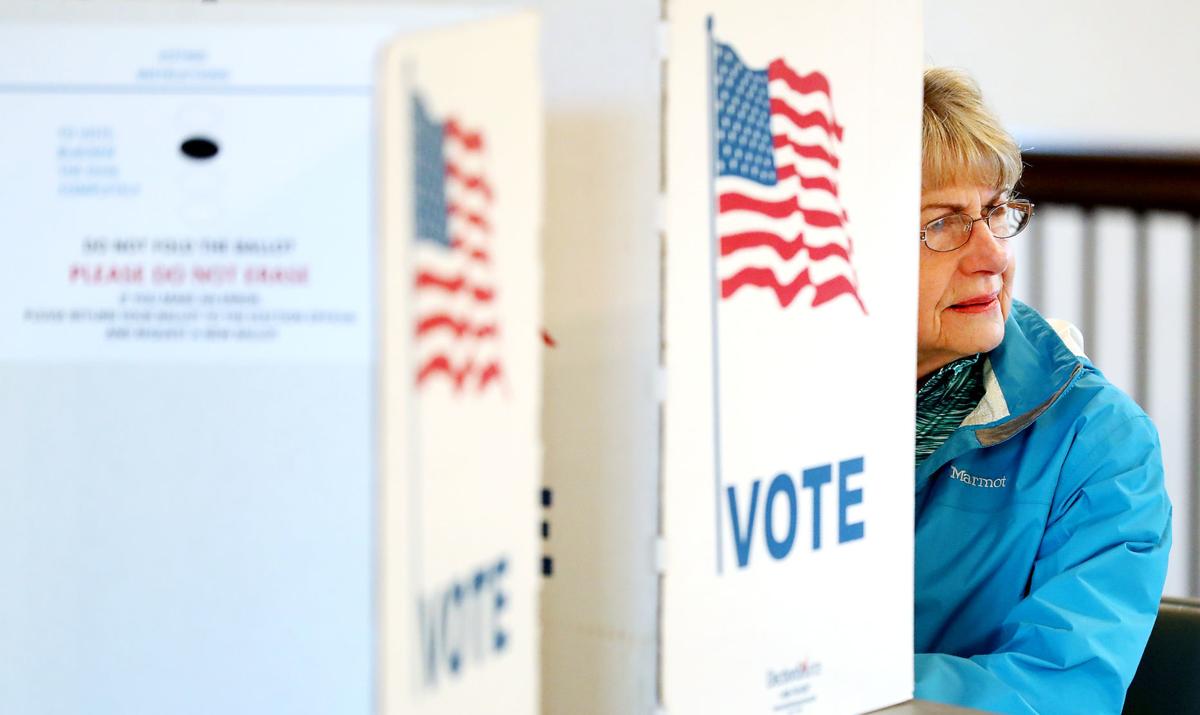 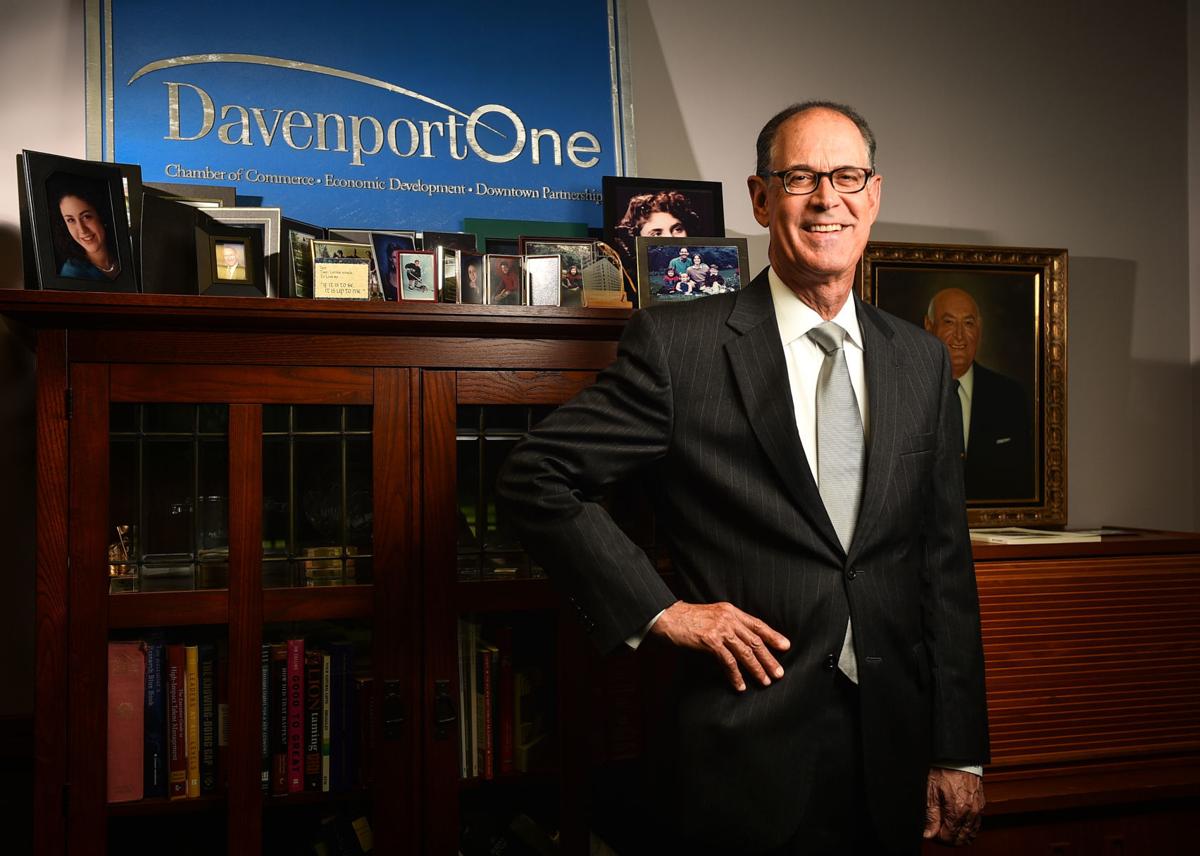 Dan Portes, a candidate for Davenport mayor, poses for a photo Monday, Sept. 3, 2019, at his office in Davenport. 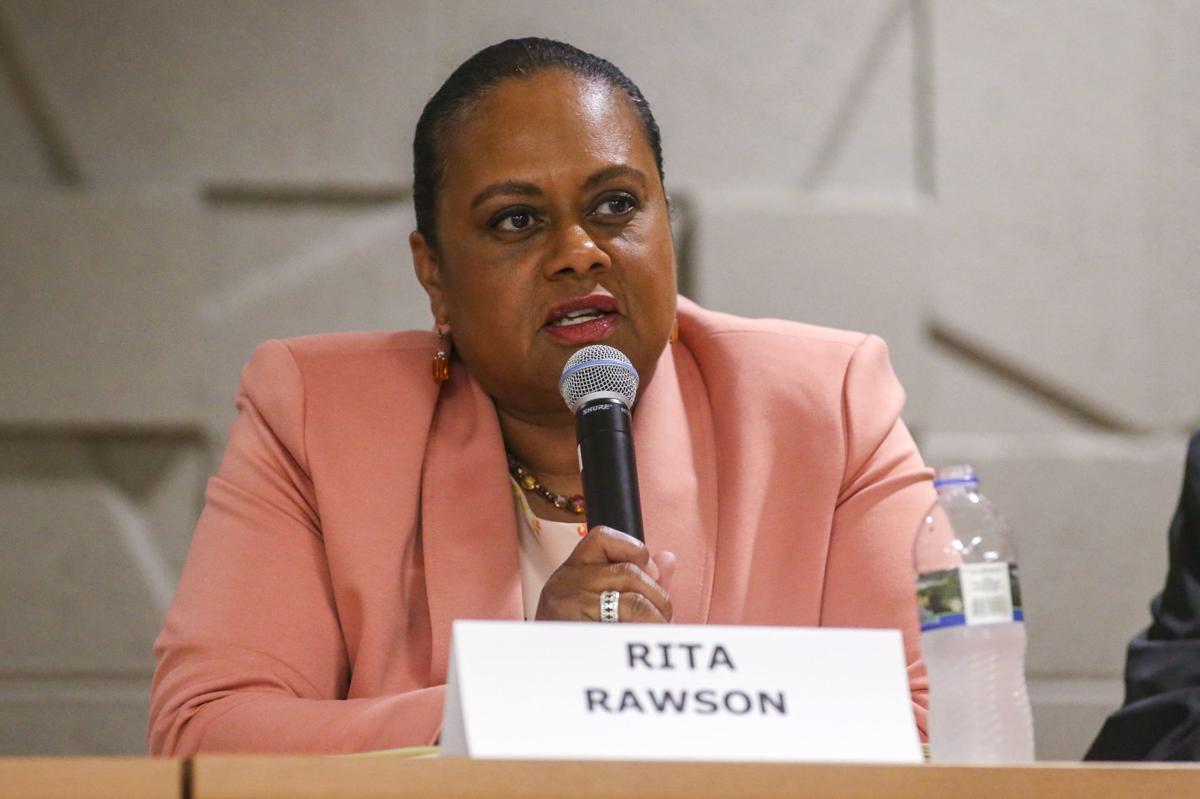 Mayoral candidate Rita Rawson speaks during a Davenport mayoral candidate forum last month. So far, Rawson has held her eight vote lead over third-place candidate Dan Portes. If those results hold, Rawson and Mike Matson will face each other on the November ballot.

Alderman Mike Matson and Alderwoman Rita Rawson emerged as the victors in Davenport’s mayoral primary Tuesday, outperforming four political outsiders for a shot at competing in the November general election.

Matson had the best showing, capturing 33% of the vote to Rawson’s 23%, according to unofficial results. Both are forwarding individual visions for Davenport, the largest of the Quad-Cities, as they chart a course for progress after Mayor Frank Klipsch leaves office.

CEO Dan Portes, founder of area recruiting company Management Resource Group, saw a surprisingly swift end to his mayoral bid. He came in with an extremely close third-place finish, trailing Rawson by only eight votes. Given the closeness of the race, a recount of the votes could push the victory over to Portes if errors were made. Portes did not immediately reply to a request for comment on that question late Tuesday night.

Meanwhile, Matson is running for office with a promise to keep building on positive momentum already coming out of City Hall. An alderman since 2008, Matson has declared himself the best candidate in large part because he brings more than a decade of city council experience to the table.

A chief area of focus for Matson is public safety. As mayor, he wants to see the city invest more in policing technologies and move forward with a conceptual assessment center for juvenile criminal offenders and low-income families that’s gained traction during Klipsch’s tenure.

Rawson has campaigned on creating more affordable housing opportunities, increasing the city’s population and encouraging redevelopment in some of the city’s most distressed areas. She has pointed to the implementation of recent city-sponsored housing initiatives as positive steps forward but thinks the issue needs to be a top priority if the city is going to truly grow and prosper.

If elected, Rawson would be the first person of color to win the mayor’s office, which has been held exclusively by men except for Kathy Kirschbaum. Kirschbaum was the first-ever woman to be elected mayor of any Iowa city in 1971. She is also the last person to have that honor in Davenport.

Davenport city government is structured under a weak-mayor system and the mayor rarely acts directly on proposed policy. Unlike some larger cities around the country, Davenport’s system employs a top-paid city manager to oversee and appoint the department heads who run the day-to-day operations that provide municipal services to Davenport residents.

But the mayor serves as the face of the city, earning nearly $48,000 a year plus access to city benefits. And whoever becomes Klipsch’s successor next year will be called upon to offer broad solutions to address longstanding and emerging local issues.

As mayoral candidates have sought financial support to make their cases to Davenport voters, Matson has been the leading fundraiser thanks in large part to $15,000 donated by his half-brother Mark Thies, an executive with west-coast utility company Avista Corporation. Matson has also relied on vocal and financial support from organized labor unions and area Democratic Iowa Statehouse officeholders.

Rawson’s campaign fund was bolstered by $25,000 she loaned herself to help pay for expenses like advertising and consulting services. She struggled to gain outside financial assistance compared to her two other well-financed opponents.

Despite Matson’s strong lead in the primary, there is still a long way to go before anyone can lay claim to the mayor’s office on City Hall’s third floor.

Unsuccessful candidates won roughly 45% of the primary voters Tuesday, and which candidate those voters will rally behind in November remains to be seen. Municipal election outcomes are often difficult to predict compared to higher-level contests that receive more attention through public opinion polling and coverage in the news media.

Primary voter turnout this year fell far short of early predictions. Five weeks ago, Scott County Auditor Roxanna Moritz thought between 15% and 20% of eligible registered voters would participate considering the addition of school board candidates to the ballot this year and a heightened awareness of elections with the upcoming Iowa Democratic caucuses.

Unofficial results from the Scott County Auditor’s Office showed 6,458 cards were cast, amounting to roughly 9% of registered voters. Voters trickled in slowly, hitting a higher point near mid-day before tapering off later in the evening.

Early voting, though, increased by nearly two-fold compared to the last mayoral contest. Of all primary votes cast for mayor, 748 were absentee, according to unofficial results. In 2015, the most recent mayoral primary, only 351 absentee ballots were cast.

Klipsch did not seek reelection to a third term this year, setting off the six-way race for his open seat. The bottom three vote-getters were University of Hospitals and Clinics employee Elizabeth VanCamp (9%); Steve Duffy, a retired municipal claims manager (7%); and longtime Public Works employee Dean Weber (5%).

In other city elections:

Alderwoman Marion Meginnis is poised to face political newcomer Phil Armer in the November election as she seeks to retain her seat for at least another two years.

Meginnis secured 65% of the vote to Armer’s 18%. A total of 578 votes were cast, according to unofficial results, and Armer beat third-place candidate Paul Vasquez by only 16 votes.

Big issues in the ward include the flooding disaster this spring that left parts of lower downtown under water for weeks after a temporary barrier failed to stand up against a record-setting Mississippi River flood. The 3rd Ward encompasses the city’s downtown — a hotspot for commercial development in recent years — along with many of the oldest parts of the city.

Meginnis joined the City Council in July 2017 following a special election to replace ex-Alderman Bill Boom. Boom resigned after he pleaded guilty to a felony for lying to a federal grand jury about a drug investigation involving a property he owned.

Since taking a seat on the council, Meginnis has championed urban revitalization as a key goal. She intends to continue that work and more with another two years in office.

Meanwhile, Armer has campaigned as a change agent who thinks top city staff have not been fully held to account for the April flooding disaster. He also wants to see the expansion of family-focused programs to address deep-seated issues like crime and poverty.

Vasquez won 16% of the vote. It was his second try at the office.

Ambrose, who often touts Davenport as “America’s greatest city,” topped the ticket with 59% of the vote to Bass’s 21%. The 4th Ward is home to some of the oldest parts of Davenport, and includes landmarks such as the Putnam Museum, Five Points neighborhood and St. Ambrose University.

As he pursues another two-year term, Ambrose is calling for increased public safety by pushing reforms in the Scott County judicial system that he often blames for a consistent presence of criminals in his neighborhood. He also wants the council to reconsider capital projects planned for the downtown riverfront and possibly reinvest that money into the city’s decaying infrastructure.

Bass, a construction supply business manager and first-time office seeker, is running with the goal of encouraging more investment along the West Locust corridor. He also wants to see environmentally friendly solutions as the council considers a long-term plan for mitigating seasonal flooding along the riverfront.

The two other contenders were Heather Brinkschroeder (14%) and Bud Wilkins (6%).

Political newcomers Matt Dohrmann and Kristi Miller will compete for the open 5th Ward seat next month after area voters chose them as the top two candidates in Tuesday’s primary.

Dohrmann won first place with 31% of the vote followed by Miller’s 24%. The only sure thing about leadership in the 3rd Ward is that a new representative will sit on council as neither candidate has held elected office before.

Dohrmann works with John Deere’s accounting department. Chief focuses of his campaign include encouraging younger folks to live and work in the Quad-Cities and fostering economic growth in the city and his ward.

Miller is a longtime 5th Ward resident with a professional background in accounting and banking. She intends to focus on revitalization of older properties and maintaining Davenport’s historic brick streets.

Since 2016, the ward has been represented by Rawson, one of two successful mayoral candidates in Tuesday’s primary. Rawson’s mayoral candidacy sparked a six-way race to succeed her.

As the city stands at a 'crossroads,' mayoral candidate Rita Rawson wants to put Davenport on the right path with expanded housing and economic growth

After casting her vote in Davenport's mayoral primary at the Duck Creek Park Lodge Theresa Bries continues on her bike ride Tuesday, October 8, 2019. The two candidates receiving the most votes will advance to a runoff election on Nov. 5. The six running for mayor are: Steve Duffy, Mike Matson, Dan Portes, Rita Rawson, Elizabeth VanCamp and Dean Weber.

Dan Portes, a candidate for Davenport mayor, poses for a photo Monday, Sept. 3, 2019, at his office in Davenport.

Mayoral candidate Rita Rawson speaks during a Davenport mayoral candidate forum last month. So far, Rawson has held her eight vote lead over third-place candidate Dan Portes. If those results hold, Rawson and Mike Matson will face each other on the November ballot. 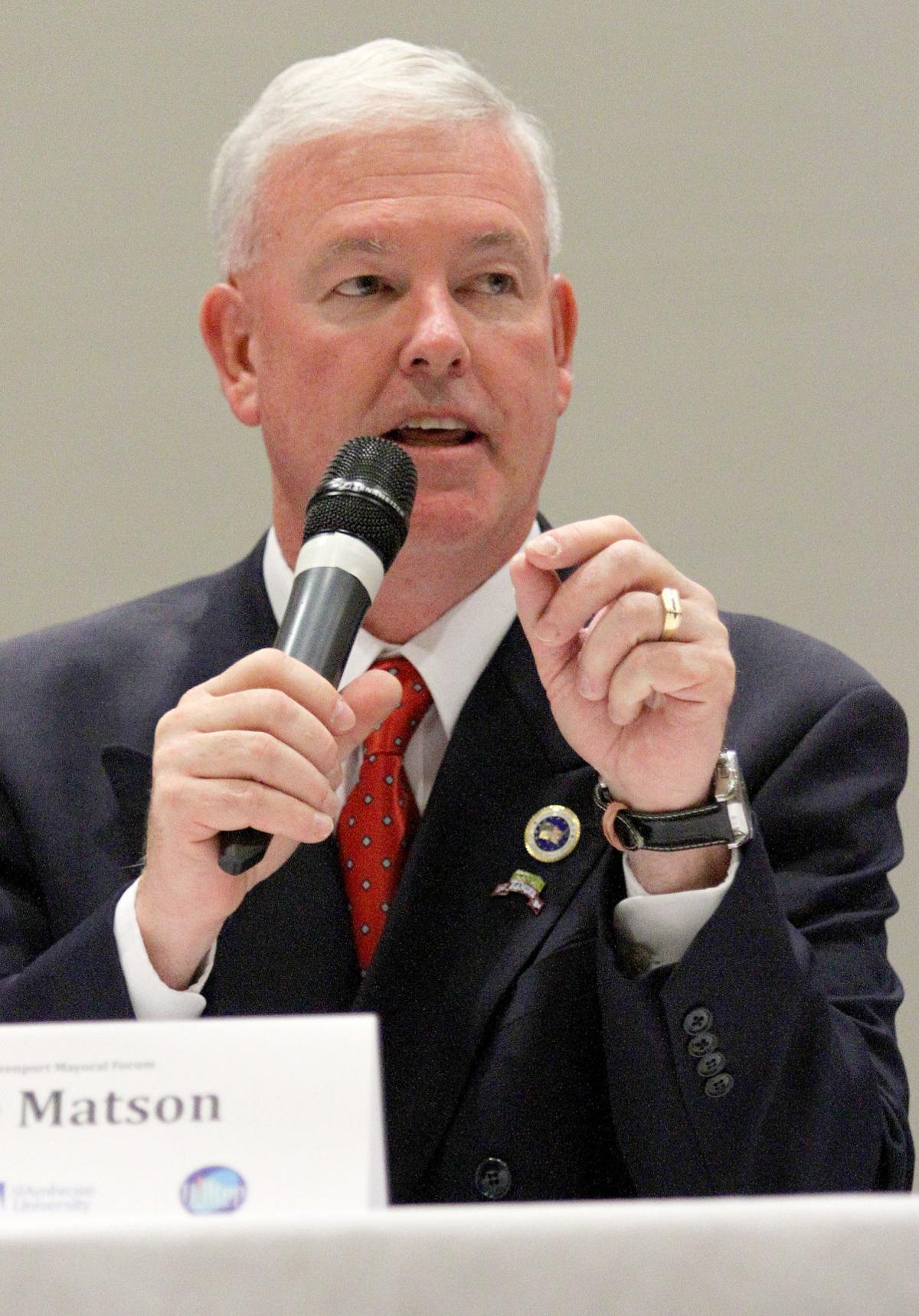