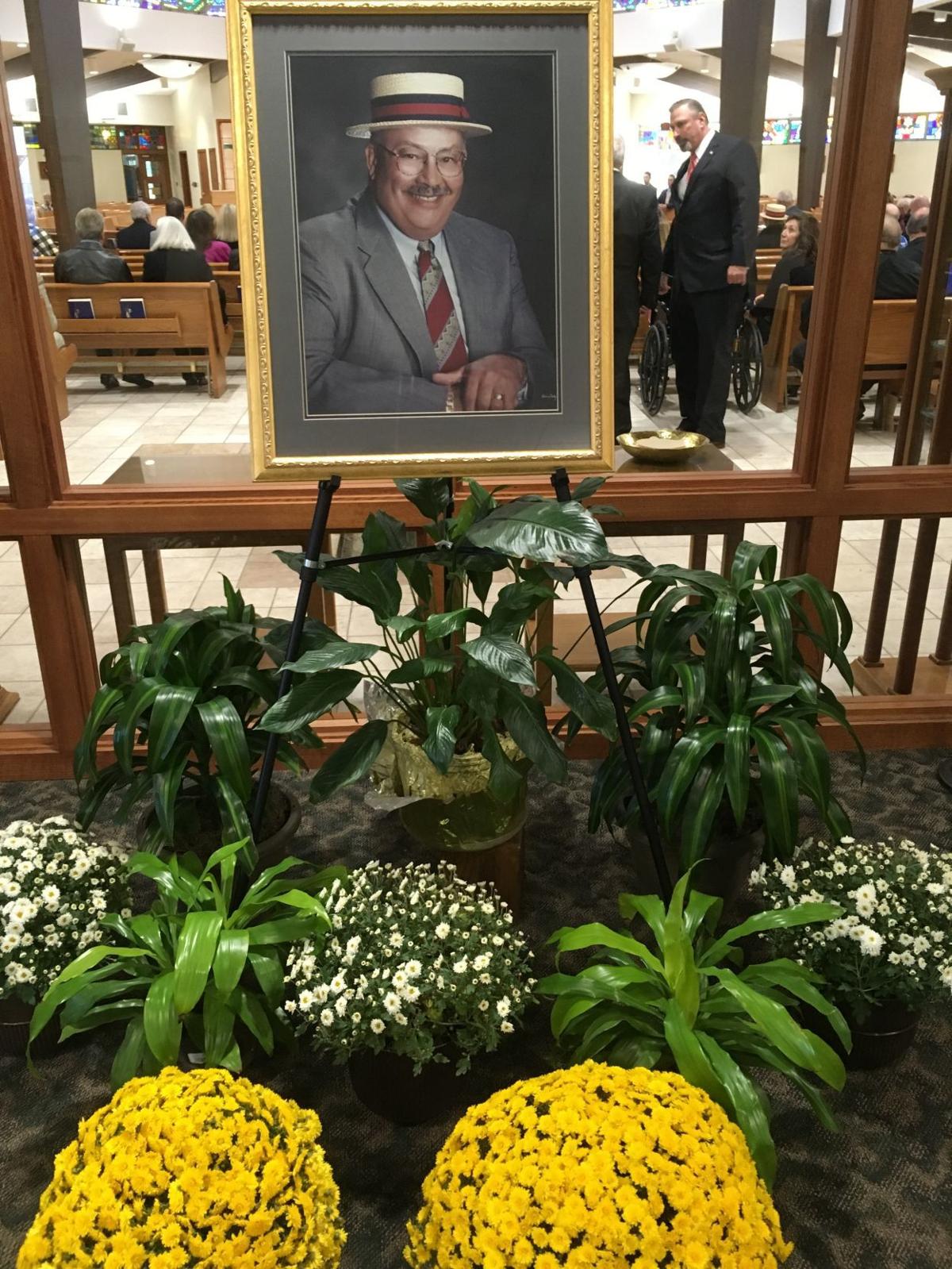 A portrait of Lawrence "Happy Joe" Whitty (1937-2019) sits at the entrance to St. John Vianney Catholic Church, Bettendorf, before his funeral service on Nov. 9, 2019. 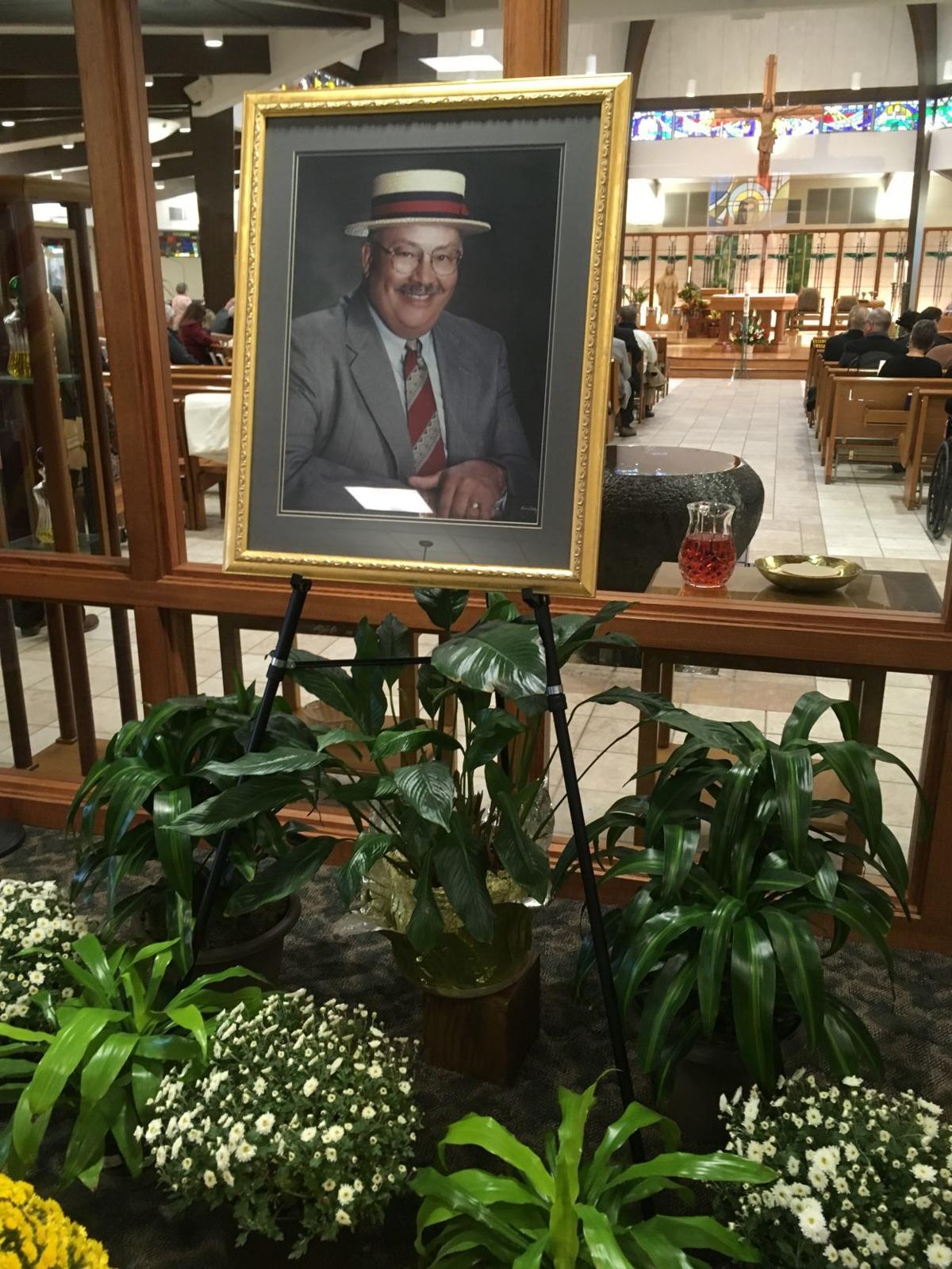 A portrait of Lawrence "Happy Joe" Whitty sits at the entrance to St. John Vianney Catholic Church, Bettendorf, before his funeral service on Saturday. 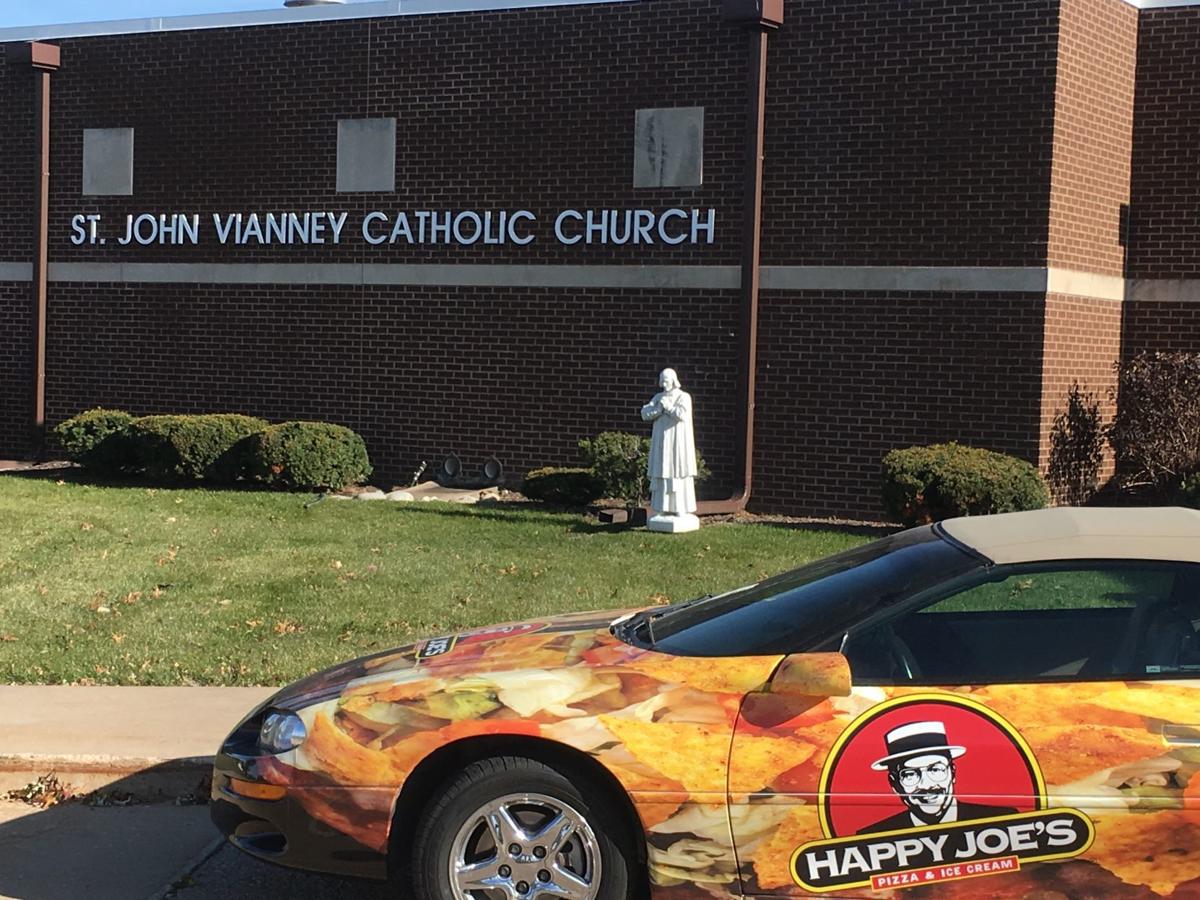 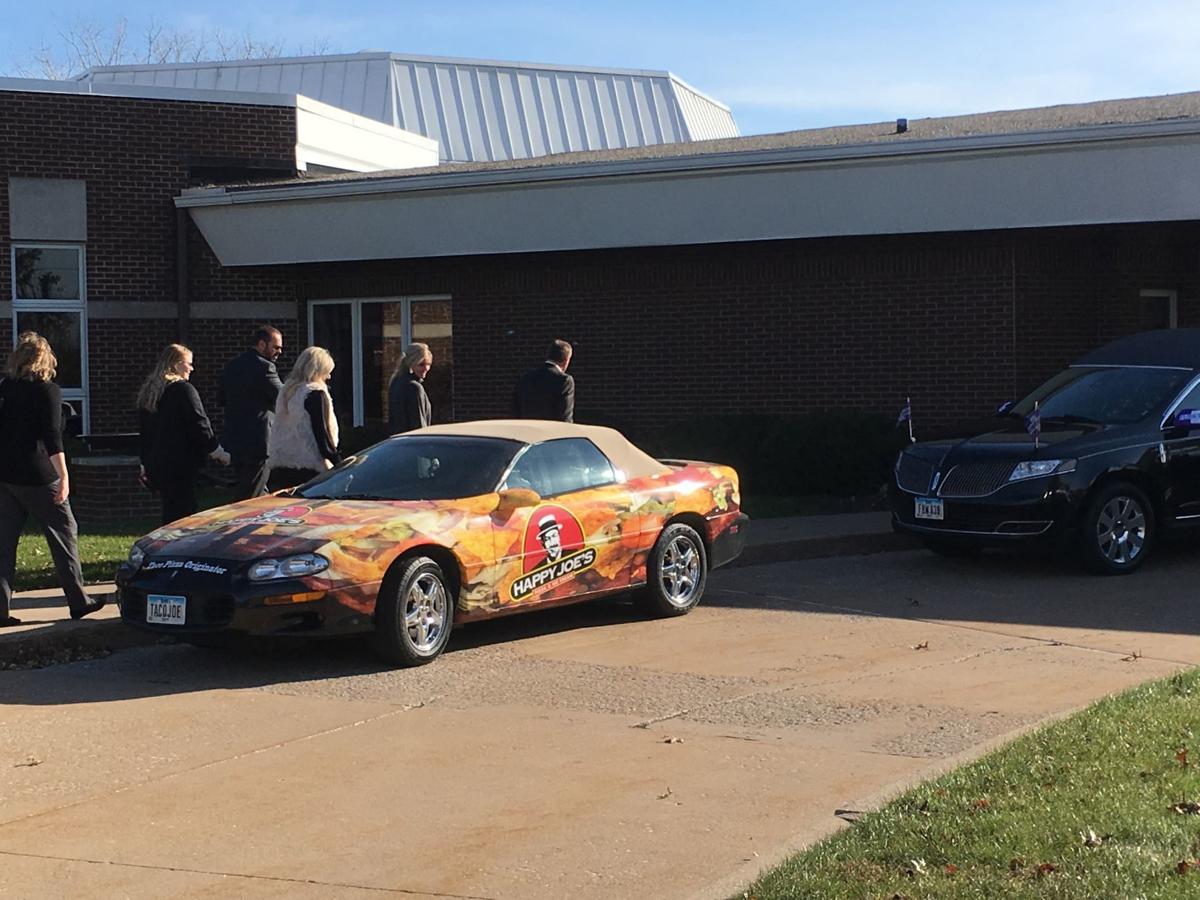 BETTENDORF — Lawrence “Happy Joe” Whitty not only served people pizzas and ice cream at his popular restaurant chain. He also served his fellow men and women with countless acts of kindness and generosity, said people who spoke at his funeral Saturday.

Whitty, who founded Happy Joe's 47 years ago in the Village of East Davenport, died Oct. 29 at age 82. He was honored at a funeral Mass Saturday morning at St. John Vianney Catholic Church, and at a Celebration of Life Saturday evening at Jumer's Casino and Hotel in Rock Island.

“Joe was, indeed, a remarkable man,” said the Rev. James Vrba, pastor at St. John Vianney, who presided over the 90-minute service in the nearly full sanctuary. “From simple and humble beginnings, he became an amazing self-made man who made a special impact on everyone he encountered. He had a zest for life that put a positive spin on everything he did.”

Whitty was a native of Minot, N.D.

He always kept a symbolic empty chair next to his desk in his office at 2705 Happy Joe Drive in Bettendorf, the priest said.

“When Joe was making an important decision, his son Larry said he always consulted who he called 'the guy upstairs,'" Vrba said. “That empty chair was a reminder to him of the presence of Jesus. What better advice could anyone ever receive?"

“We give thanks for the gift of Happy Joe today," the priest said. "We can also be thankful for the gift of faith that he shared throughout his life by nourishing others — not just with pizza and ice cream, but with the love that comes from a passionate human heart and the very soul of God.”

“He had very little formal education, yet his intelligence was keen; it was sharp; it was intuitive,” Larry Whitty, one of Joe's nine children, said in a eulogy. “He was raised by fun-loving, down-to-earth parents, lived on a small family farm. They really didn't have any money.”

“Our dad taught us kids and employees, by his actions, to do the right thing,” he said. “He was a great leader by example. Our dad never wanted details to get in the way of great stories. He didn't like details. Our dad loved participating in a parade and seeing the smile on a child's face. I can't tell you how many times us kids had to ride in those parades, and wound up in a vehicle that died in the parade.”

Whitty recalled that his dad once picked up a hitchhiker while traveling from Iowa City to the Quad-Cities and let him sleep in their home.

“Our dad was successful in all of life's disciplines because he took care of people. All of his life's rewards came from a simple approach to life,” Whitty said. “Our dad also found a way to find success financially — in his life, in his business. ... He just knew how to do the right thing.”

Whitty's philanthropy was directed toward those with special needs, the afflicted and those whose lives needed an uplift or momentary flash of happiness, according to his obituary. He was actively involved with Junior Achievement, Partners in Education, the Handicapped Development Center, and Tomorrow's Leaders.

He founded the Happy Joe’s Kids Foundation, which supports organizations that help kids with special needs, whether those needs are developmental, income-related or education-based.

Whitty's favorite days of every year were the days he presided over an annual holiday party for kids with special needs. Now in its 47th year, the party will be held Dec. 3 and 4 this year at the TaxSlayer Center in Moline, said Whitty's daughter Kristel Ersan.

“It is about people taking note of what Joe did,” Ersan said before the funeral of his kindness. “He used to say things like, 'Tip your garbage man.' Just little things like that. He was the king of buying the guy behind you the meal at the drive-up. He did that ever since we were little.”

“Just pay it forward — rake somebody's leaves, anything like that,” she said. “Offer a ride, take someone to a doctor's appointment. It doesn't have to be a big thing.”

On Friday, the family donated $9,000 for two Double 3 “tele-presence” robots, which allow home-bound kids to go to school remotely, Ersan said. There has been one available in the area through the Mississippi Bend Area Education Agency. It was demonstrated at a Happy Joe's lunch Friday. “When they go to school with the robot, they're the most popular kid in school because everybody wants to sit with them,” she said.

“Joe was very religious,” Ersan said. “He loved St. Anthony's (in Davenport) and this church. He kind of bounced back and forth between them. He loved both of them."

His first wife (Ersan's mother), Sandra, died two years after he started the business, at 33, from leukemia. They had four kids, and he and his second wife, Nancy, had five kids. Nancy preceded him in death in 2008. Everybody called him “Grandpa Joe,” Ersan said.

A recording of Ersan singing the country song “Grandpa” was played at the funeral as a recessional. “I recorded that because I decided I should not sing live today,” she said, noting many grandkids walked out with his casket to the music. “That was his favorite song. It's 'Grandpa, tell me about the good old days, when things were simpler and families ate together.' "

“He used to always talk about the old-fashioned way,” Ersan said. “But he was also very progressive. He had friends of every race and creed. He believed in everybody."

“He was about, 'I'm about you being a good person and adding value to the world,' " she said. 'If you don't hurt people, you're good with me.' He was an equal-opportunity guy always.”

Whitty is survived by 24 grandkids and 12 great-grandchildren.

The crowd at the funeral included the man who ran a Happy Joe's in Egypt in the '80s, Ersan said, noting there were also candlelight services in Whitty's honor in Ireland and Turkey, where her husband is from.

“Everybody loved Joe,” she said. “It was a great life he lived.”

“I knew everybody loved him, but I forgot how far it reached,” Ersan said. “For so many people, it was their first job.”

“He was genuine; he was fun-loving; he was kind,” said Decker Ploehn, Bettendorf city administrator, who attended Saturday's service. “He was everything that everybody said. He always had a smile, always had a kind deed for anybody. If anyone was down and out, Joe would take care of them."

In a private room open to family and friends before the funeral, Whitty lay in an open casket, wearing his trademark straw boater hat. It was placed on top of the covered casket in the sanctuary.

The Quad-Cities and Bettendorf lost an entrepreneurial and philanthropic icon last week with the death of Lawrence "Happy Joe" Whitty.

The public is invited to help remember and celebrate the life of Quad-Cities icon "Happy Joe" Whitty at three events later this week.

The friendship between 'Happy Joe' Whitty and the fire chief

People get nicknames for a reason, and for Lawrence "Happy Joe" Whitty, the reason was obvious.

People in the Quad-Cities and beyond remembered and mourned "Happy Joe" Whitty on Tuesday.

A portrait of Lawrence "Happy Joe" Whitty (1937-2019) sits at the entrance to St. John Vianney Catholic Church, Bettendorf, before his funeral service on Nov. 9, 2019.

A portrait of Lawrence "Happy Joe" Whitty sits at the entrance to St. John Vianney Catholic Church, Bettendorf, before his funeral service on Saturday.