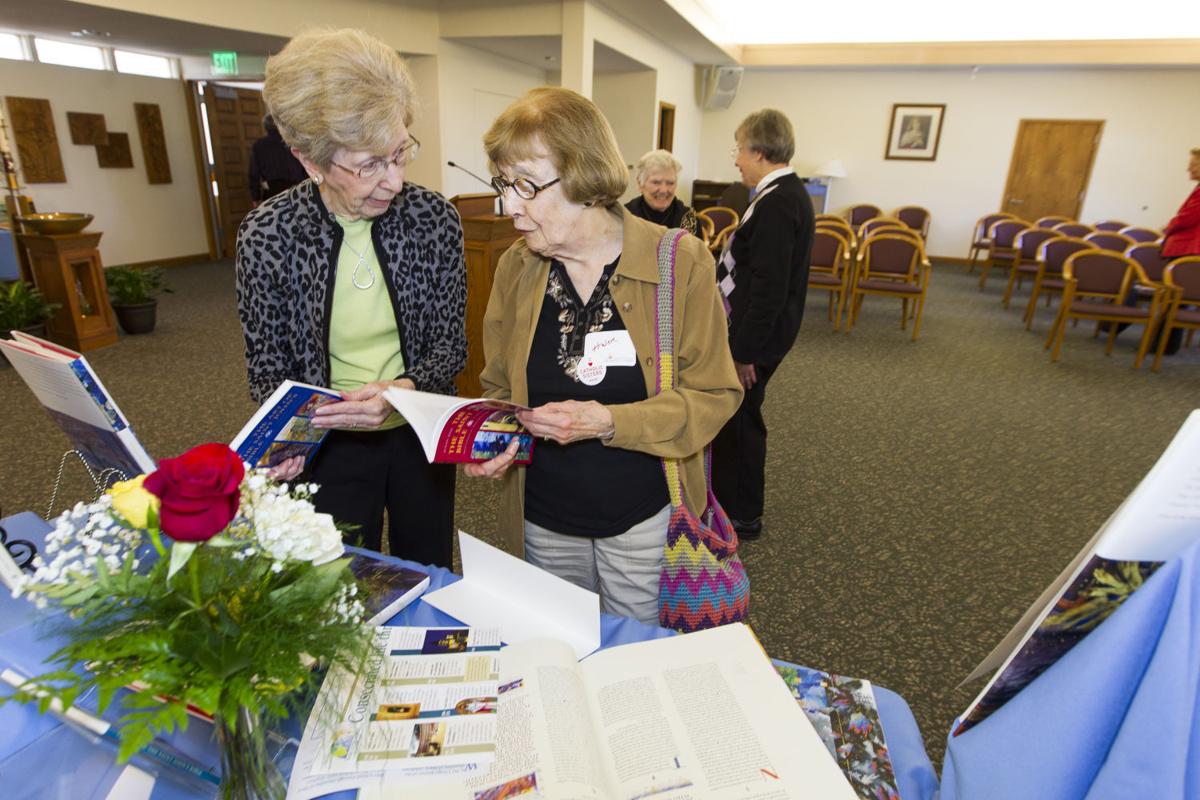 Sister Joann Kuebrich, left, talks with Helen Delacluyse, of Rock Island, about the Saint John's Bible at the open house Sunday for the Congregation of Humility of Mary. 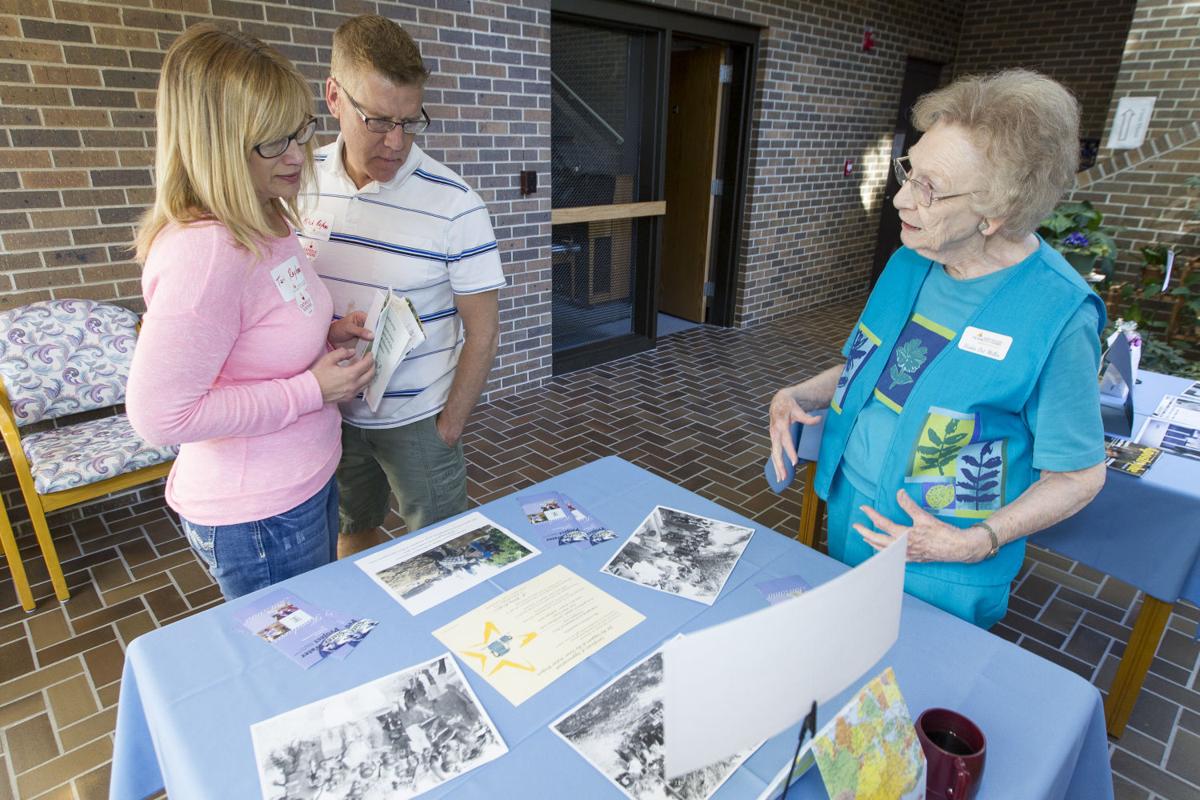 Sister Pat Miller, right, talks about the Sister Water Project with Teri and Mitch Reyhons of Davenport on Sunday during an open house at the Congregation of Humility of Mary. 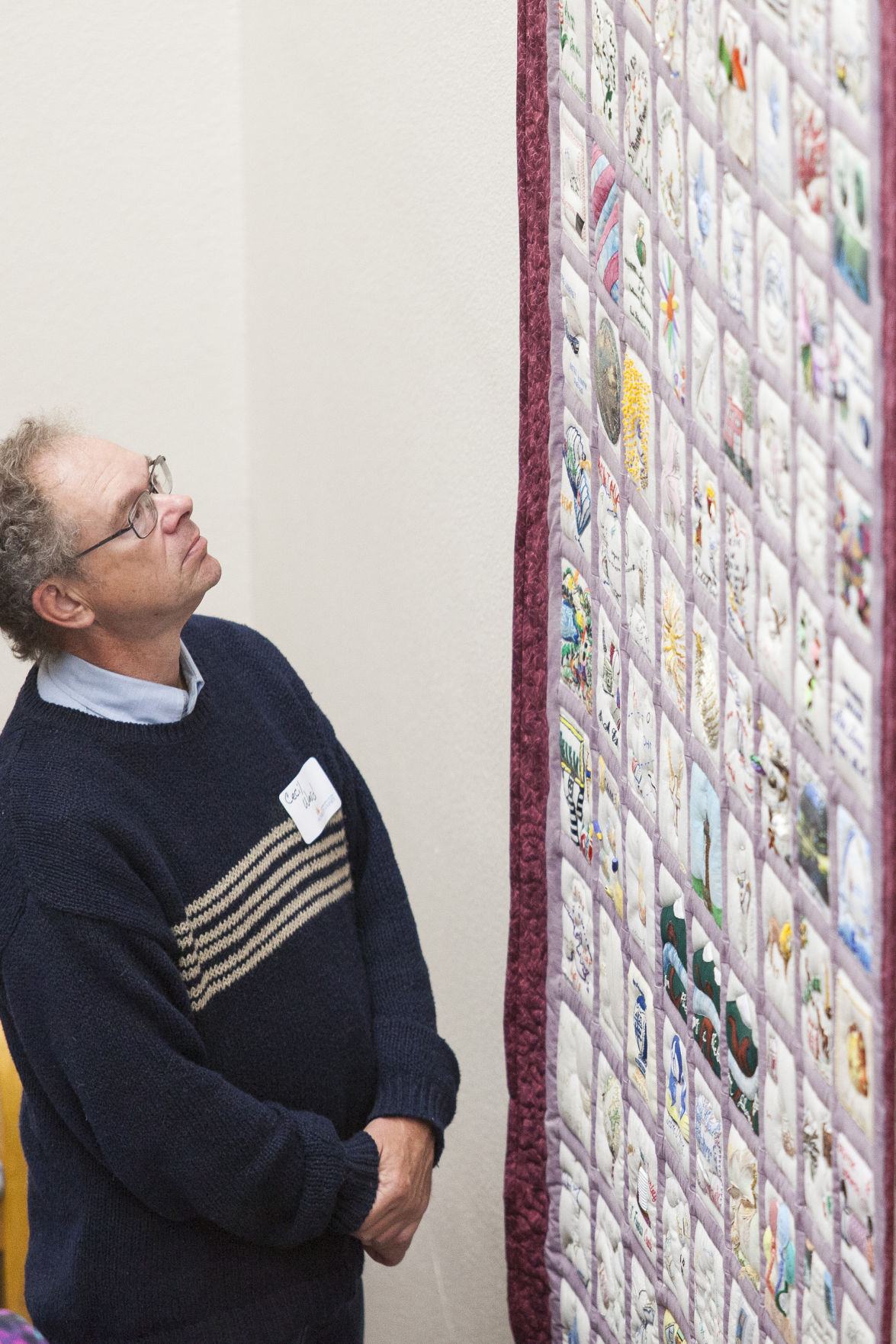 Cecil Ward of Bettendorf looks over patches on the CHM Quilt at the open house Sunday. The squares were sent out to sisters all across the world and asked to sew their story onto the patch.

Visitors learned more about the mission and the history of the Congregation of the Humility of Mary on Sunday afternoon.

At an open house Sunday afternoon at the center, 820 W. Central Park Ave., Davenport, guests stopped at table displays that provided information about the congregation’s ministries, history and consecrated life.

“We just wanted people to become more acquainted with us,” said Sister Barb Kopel. “It was just the gift of God we got such a beautiful day.”

Consecration is an act by which a person is dedicated to the service and worship of God — “We have taken vows,” she said.

The Congregation of the Humility of Mary is “doing different things to celebrate that,” said Kopel, who entered the congregation in 1964. The biggest change within the last several decades for sisters was the physical change in clothing that came with Vatican II, Kopel said. Prior to the early 1960s, the sisters wore habits, but they now wear contemporary dress.

Sister Delphine Vasquez said the order collaborates with lay women and men from different walks of faith through an associates program. Patricia Knopick coordinates the program, which includes 98 associates.

Associates come from all denominations, genders and races who want to support the mission and ministry of the congregation, she said. They must be willing to participate in community liturgies, celebrations with the sisters and associates, and be willing to live the gospel, sharing the gifts and talents they have received.

“Each associate has a contact sister,” said Knopick, who is retired from teaching at West High School and the East Moline Correctional Center. She added that associates are “looking to increase their spirituality. Sisters are good role models for us,” she said.

Some associates dine regularly at the center, and others help some of the elderly sisters who can’t drive by taking them shopping and on errands.

Among the visitors was Emily Bitterman of Davenport, who saw some familiar faces: She is the mail carrier for the center neighborhood.

“I came here to learn more,” she said. Her husband is Catholic, and she has just started attending Sacred Heart with him.

Ruth Klouda of Moline came to the open house because she attended the Ottumwa Heights Academy, which was a two-year college and educational center for liberal arts and teacher training.

She attended only one year, “But that was the best year of my life,” she said. “The school was really good.” She said she learned independence from being away from home, and “a lot of values” from the sisters.

“Those nuns were very frugal,” Klouda said. “I remember sitting watching them darn their socks.”

Mission of CHM: help the 'poor and the powerless'

The mission of the Humility of Mary reads:

“We the members of the Congregation of the Humility of Mary call one another to live the Gospel with simplicity and joy following the example of Mary.

“Like our founders, we strive to be attentive to the call of the spirit in the signs of our times, especially the needs of the poor and the powerless.

“We commit ourselves as individuals and as a congregation to work or justice within the human family and to care for the earth itself.”

Congregation of the Humility of Mary ministries include administration, counseling, education, health, hospital ministry, music, neighborhood ministry, pastor care, prayer ministry, social justice, stewardship of the environment and volunteering. Humility of Mary Housing Inc., Humility of Mary Shelter, Inc. and Our Lady of the Prairie Retreat in eastern Iowa are among its ministries.

For more about the Congregation of the Humility of Mary, visit www.chmiowa.org

Watch now: Video of Pro-Palestine demonstration in Chicago on Wednesday

Watch now: Video of Pro-Palestine demonstration in Chicago on Wednesday

Davenport aldermen may make it more difficult to open a neighborhood bar.

'I would have died in my bed': Rock Island restaurant owner recalls COVID-19 experience

A Rock Island restaurant owner recalls his experience after testing positive for COVID-19.

The driver of a car that ended up in the frozen Mississippi River in Moline in February is being charged with aggravated driving under the influence of alcohol in connection with the death of his passenger.

Sister Joann Kuebrich, left, talks with Helen Delacluyse, of Rock Island, about the Saint John's Bible at the open house Sunday for the Congregation of Humility of Mary.

Sister Pat Miller, right, talks about the Sister Water Project with Teri and Mitch Reyhons of Davenport on Sunday during an open house at the Congregation of Humility of Mary.

Cecil Ward of Bettendorf looks over patches on the CHM Quilt at the open house Sunday. The squares were sent out to sisters all across the world and asked to sew their story onto the patch.