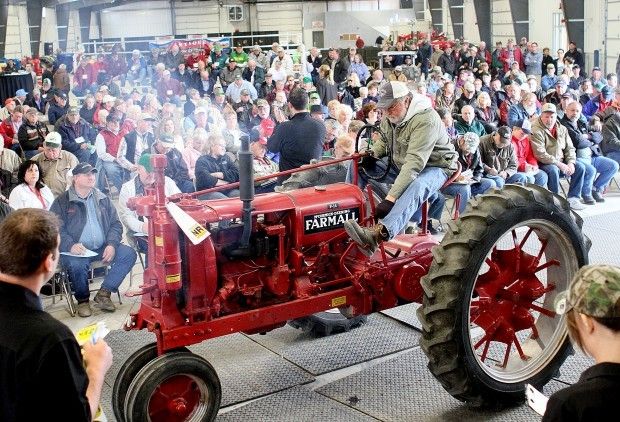 A Farmall tractor is on display in front of bidders during a Gone Farmin' auction in 2013 of more than 200 antique tractors at the Mississippi Valley Fairgrounds in Davenport. 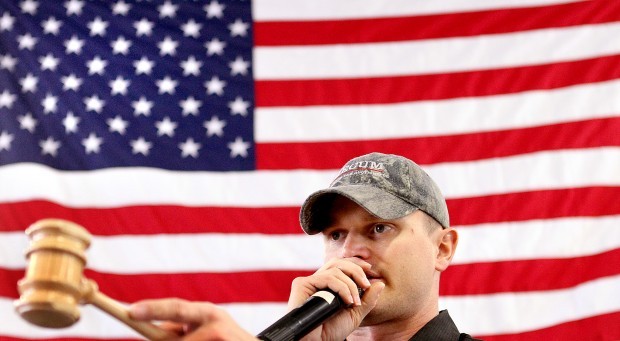 Auctioneer Matt Moravec sells during the 3rd annual spring auction of more than 200 antique tractors Saturday by Mecum Auctions at the Mississippi Valley Fairgrounds in Davenport. 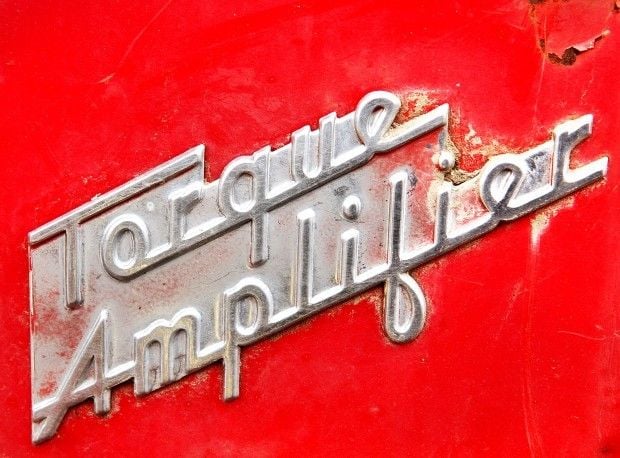 A chrome badge on a McCormick Farmall tractor.

Bidders arrived Saturday morning to watch as a parade of antique tractors wove through the Mississippi Valley Fair Center on the fairgrounds in Davenport.

They attended the Gone Farmin' auction event to view tractors from owners in the U.S. and Canada. They looked at more than 220 machines Friday and Saturday, including a John Deere A, an Allis Chalmers G, an International W450 Diesel or the 66 Orchard, by Oliver.

About 480 bidders were involved, and the auction brought in more than $1 million.

"It’s been great, better than we could have imagined," Dan Mecum said.

Mecum, of Mecum Auctions of Walworth, Wis., pointed out that the new Fair Center is perfect for the event. A similar auction was last November, and the company will be back next November, he said.

Arthur Norder of Sheldon, Ill., won a bidding war for the Oliver Orchard. He got the shiny green machine for $16,000 and signed papers for the purchase as his 9-year-old grandson, Adam, wiggled in excitement by his side.

Norder will add the Oliver to his collection, which he takes to area fairs and other events.

The purchase was hailed by other members of the family − daughter Joy and daughter-in-law Amy, who had traveled four hours to Davenport on Friday night as a surprise to their parents, the collectors.

Arthur Norder said he went to the auction with an interest in the Oliver, as he has others from that manufacturer.

Prices were in heady ranges, with one of the top sellers going for $51,000. That price was for a John Deere 430S, all-fuel tractor, perfectly restored and one of only 18 made. On Friday, a bidder from Australia got involved in the auction, Mecum said; he was after the John Deere A tractor that ultimately sold for $13,500.

Part of the offerings were from a collector in Thunder Bay, Ontario, Canada. Several weeks before, Mecum and his wife, Carrie, drove to Thunder Bay to look at 90 tractors from John Buchanan, who had posted his collection online and wanted to sell them at a single event.

They were part of the 220 tractors and more than 300 vintage signs, called "barn art," according to Lane Everly, who works for Mecum.

The event also was taped for broadcast by RFD TV, and that's one of the ways that John Sedlock of Lynn Center, Ill., found out about it.

Sedlock, who raises asparagus and uses an antique Allis Chalmers for the work, also was a volunteer driver, affiliated with the local Antique Engines and Tractor Association. Association members volunteered their time at the auction and in turn, the club got a donation from the Mecum company.

Dennis and Lynne Treimer of rural Tipton were among the crowd at Saturday's auction. Dennis Treimer was there to look at blue Ford tractors.

Jan. 6th prosecutors use insurrectionist’s ‘Game of Thrones’ quote against him

Jan. 6th prosecutors use insurrectionist’s ‘Game of Thrones’ quote against him

The Davenport City Council will meet next week to consider approving an economic development agreement with Russell Construction and Development to facilitate the development of a planned 95-acre industrial park at 8730 Northwest Boulevard.

A Farmall tractor is on display in front of bidders during a Gone Farmin' auction in 2013 of more than 200 antique tractors at the Mississippi Valley Fairgrounds in Davenport.

Auctioneer Matt Moravec sells during the 3rd annual spring auction of more than 200 antique tractors Saturday by Mecum Auctions at the Mississippi Valley Fairgrounds in Davenport.

A chrome badge on a McCormick Farmall tractor.