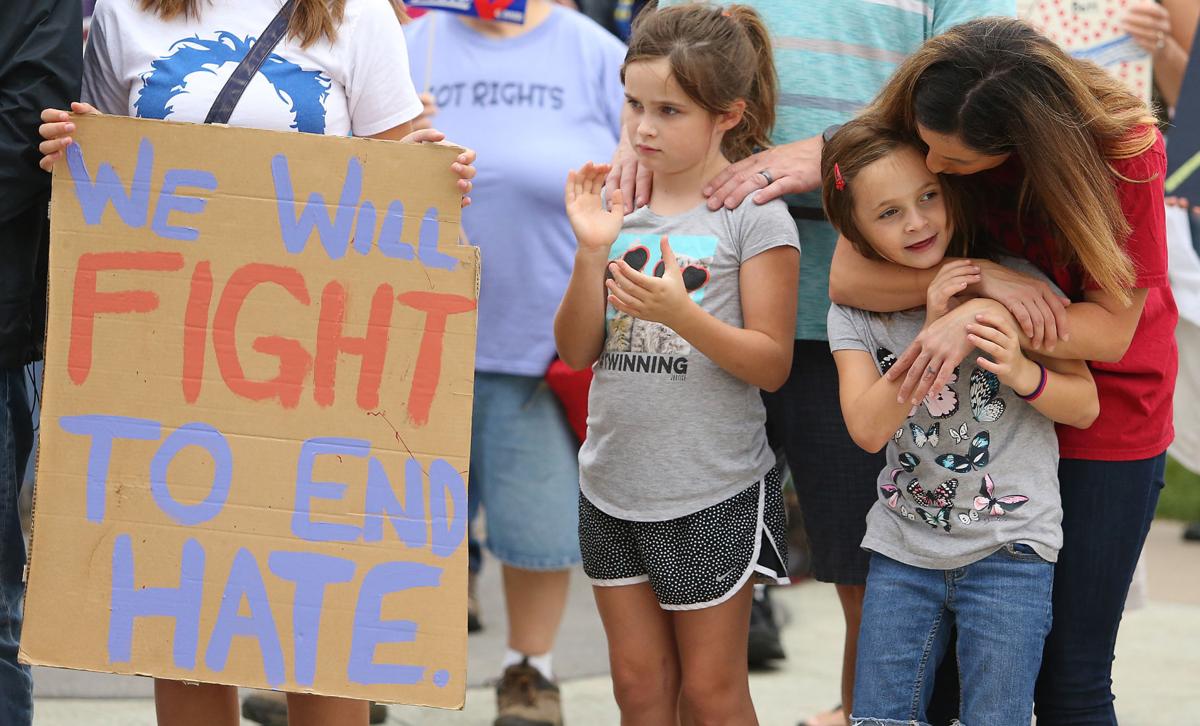 Bella Schrempf, 7, of Rock Island, gets a hug from her mother, Jen, during Sunday's rally for a Welcoming Quad-Cities held at Schwiebert Park in Rock Island 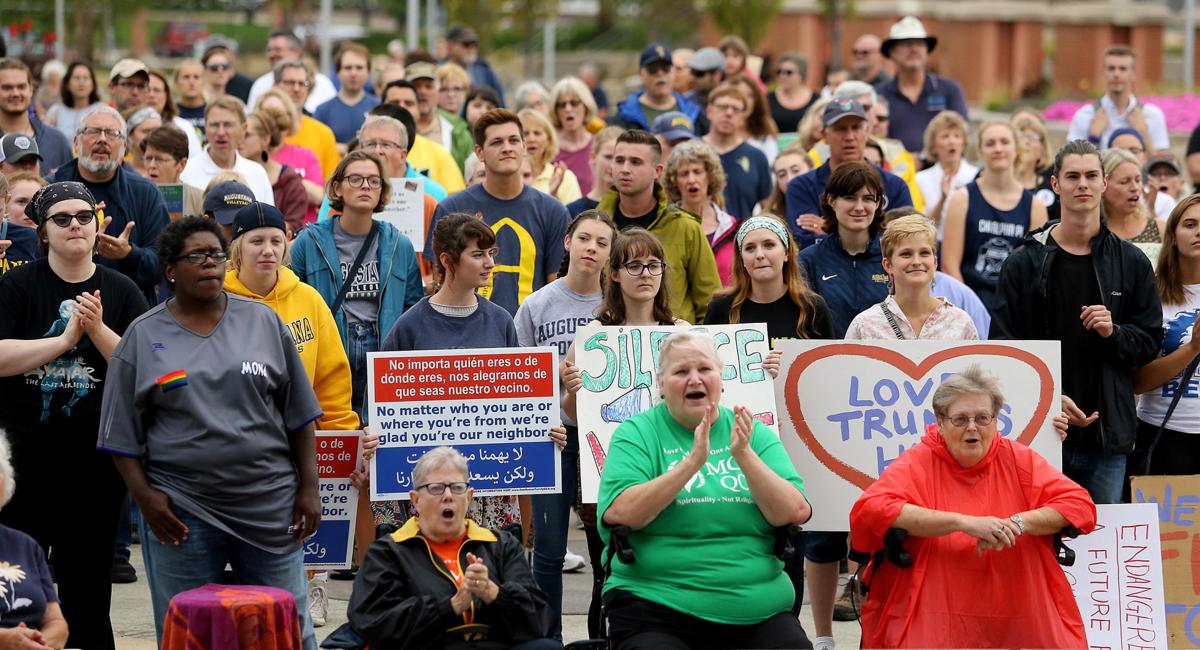 A few hundred people turned out to support a rally for a Welcoming Quad-Cities held at Schwiebert Park in Rock Island Sunday. 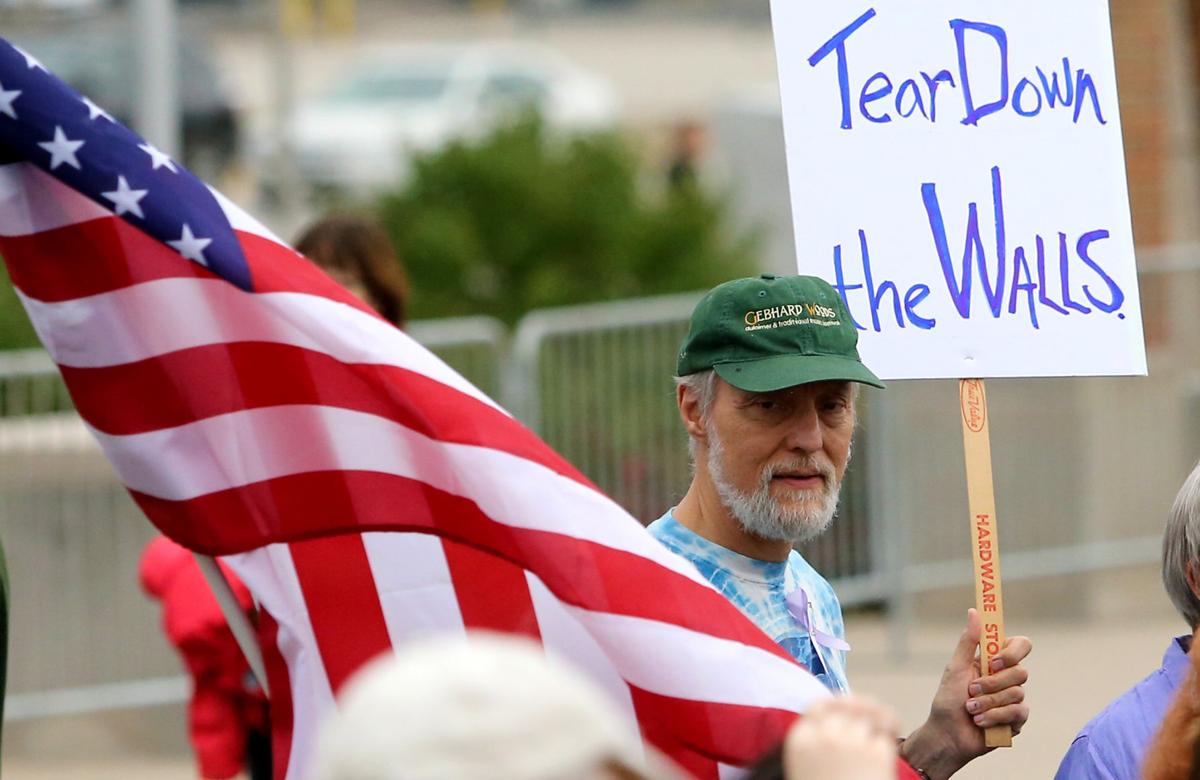 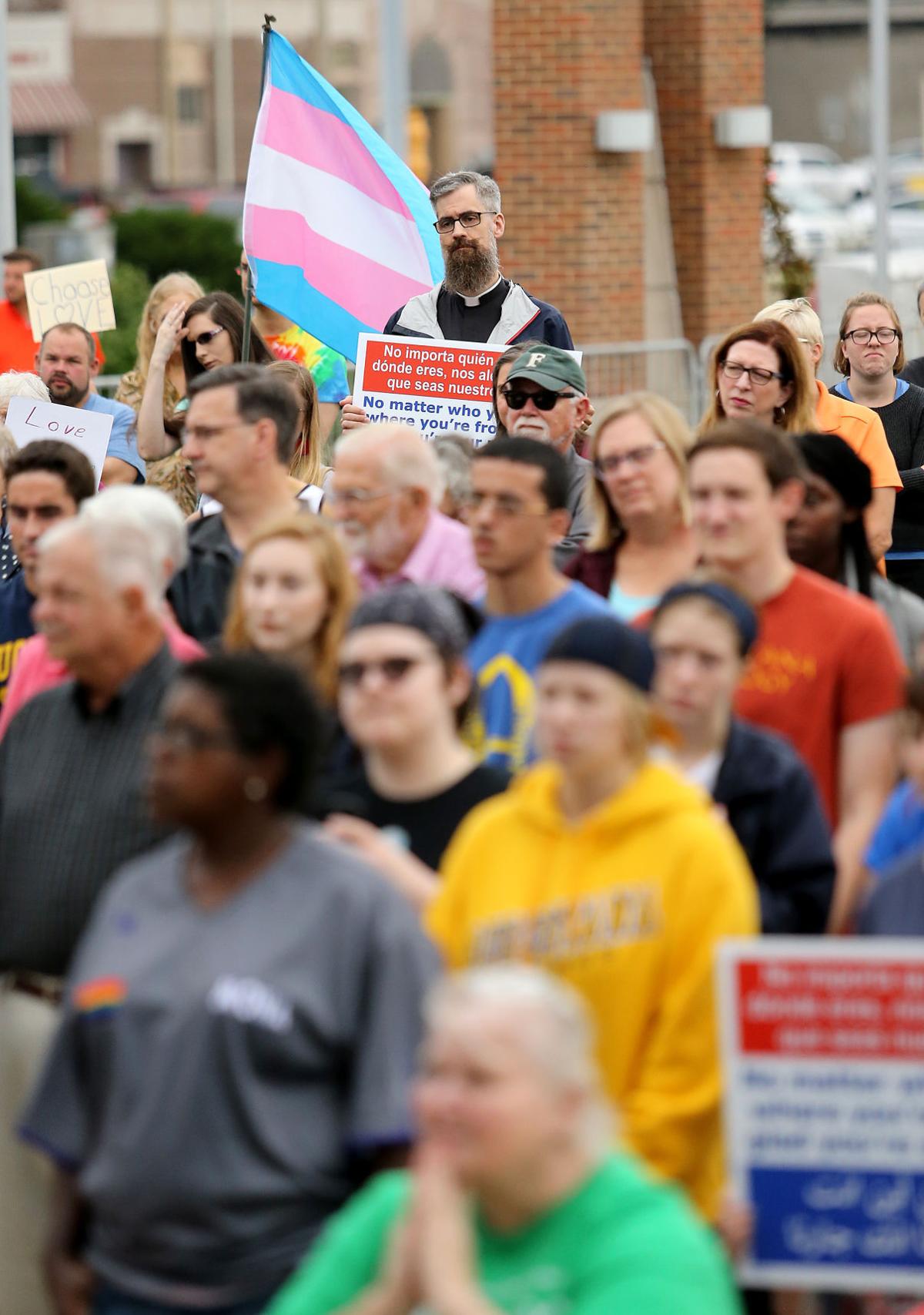 One Human Family QCA organized the rally for a Welcoming Quad-Cities.

If we start hating them, then we become them.

That was the message from Rabbi Henry Karp, one of the conveners of One Human Family QCA, the group that organized a rally Sunday afternoon in Schwiebert Riverfront Park, Rock Island, to affirm the welcoming spirit of the Quad-Cities and a community commitment to diversity.

The crowd of about 300 people included Gale Francione, of Davenport, who said the Quad-Cities needs to get together and speak about being a welcoming community.

Francione, who is “100 percent Italian,” said that one time (Italians) “were not considered white people in this country. We were those 'swarthy immigrants,'” she said. “The definition changes.”

The Rev. James Vrba, of St. John Vianney Church, Bettendorf, was among many members of the clergy at the rally. He made a general announcement at Mass on Sunday to encourage people to attend, he said. “Come to the rally this afternoon and join in,” he told parishioners. “Stand up for what is right and what is good.”

Kai Swanson, Rock Island County Board member, was the emcee.

Rita Rawson, 5th ward alderwoman in Davenport, read the anti-hate and anti-racism proclamation the city of Davenport unanimously passed Aug. 16. “All in favor, say ‘Aye,’” she said, and the crowd resounded with an enthusiastic “Aye!”

Vera Kelly and Berlinda Tyler-Jamison, leaders of local NAACP chapters, stood together to discuss the history of the NAACP and recruiting attempts by white supremacist groups in the Quad-Cities. “We support democracy, dignity and freedom,” Kelly said. “”It’s time for us to stop complaining and start working” and to hold “Number 45” (President Donald Trump) accountable, she said.

“God bless the America we want to be,” Tyler-Jamison said.

“To fight racism, we need public education. We need to fund it,” said Maria Bribriesco, deputy state director and political director for the League of United Latin American Citizens-Iowa.

She referred to the Constitution of the United States. “There’s no nobility, no divine right,” she said. She said that President Donald Trump pardoned Joe Arpaio, a former Arizona sheriff whom Bribriesco called “a most violent, racist man.”

Karp, convener of One Human Family QCA, said he was asked about the possibility of rain affecting the gathering. “If people can’t stand up to a few raindrops, how are they ever going to stand up to neo-Nazis and white supremacists?” he asked.

“When we replace hate with love, when we replace bigotry with understanding … we have to do that across the board,” not just for victims, but also those who hate. “If we start hating them, then we become them.”

Chris Dunn led the gathering in songs, including “If I Had a Hammer.” Other speakers included Brandy Donaldson, vice president of African-American Lesbian Professionals Having a Say.

On Monday, the City of Rock Island will issue a proclamation as a safe, welcoming and diverse city. Bob Babcock, a member of One Human Family QCA, invited those at the rally to attend the Rock Island City Council meeting to applaud the action.

Rock Island is the area’s fourth city, along with Davenport, Bettendorf and Silvis, to issue such proclamations.

One Human Family QCA (Quad Cities Area) is a community-based organization including but not limited to faith leaders, civic leaders, educators and other Quad-City residents to address issues of discrimination, hatred and injustice.

Churches United director to step down

The first non-clergy executive director Churches United of the Quad-City Area has known is stepping down from her position after 19 years of service.

Bella Schrempf, 7, of Rock Island, gets a hug from her mother, Jen, during Sunday's rally for a Welcoming Quad-Cities held at Schwiebert Park in Rock Island

A few hundred people turned out to support a rally for a Welcoming Quad-Cities held at Schwiebert Park in Rock Island Sunday.

One Human Family QCA organized the rally for a Welcoming Quad-Cities.