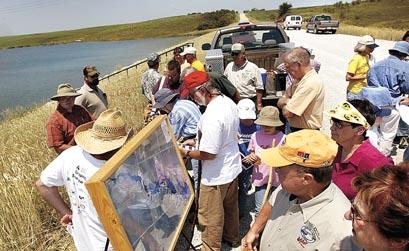 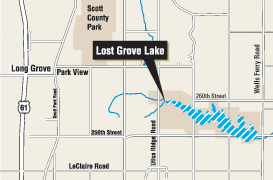 The low construction bid for a dam that will create Lost Grove Lake in Scott County came in nearly $1.4 million under the estimated cost.

JB Holland Construction of Decorah, Iowa, submitted a bid of $4.15 million for the project. The Iowa Department of Natural Resources, or DNR, had estimated the project at $5.5 million.

“It is a heck of a bid,” said Mike McGhee, the DNR’s lakes coordinator. “We are tickled about it.”

Planning for the 350-acre lake began in 1987. Construction of the dam during two construction seasons is expected to create

60-75 jobs. Part of the funding for the project is through Iowa’s I-JOBS program.

“This is one of the final pieces of the puzzle,” McGhee said. “There is some specialized work on the dam we’ll have to hire an engineering firm for, but that isn’t a big part of the project.”

After review, the DNR’s chief engineer is expected to submit the low bid to the Natural Resources Commission for approval May 13. With approval, construction is expected to begin in June and take about 18 months, McGhee said.

The DNR received eight bids, ranging from the low bid from the Decorah company to a high bid of $8.5 million from a Minnesota-based company.

The entire project is expected to cost $7.15 million. The balance of the funding is expected to come from marine fuel tax and other DNR revenues, McGhee said. The second phase of construction will include shore preparation, boat ramps, parking lots and restrooms.

The first piece of land was purchased and plans for the  lake, three miles west of Princeton, Iowa, were made public in 1987. A 20-acre section of the lake has been filled.

The 20-acre portion of the lake is about 15 feet deep. When it is completed, the lake will have an average depth of 24 feet, with its deepest point being 62 feet. The lake will have more than 12 miles of shoreline.

A DeWitt man is facing sexual abuse charges after police said he raped a woman.

Davenport looking to take police out of some nonviolent 911 calls