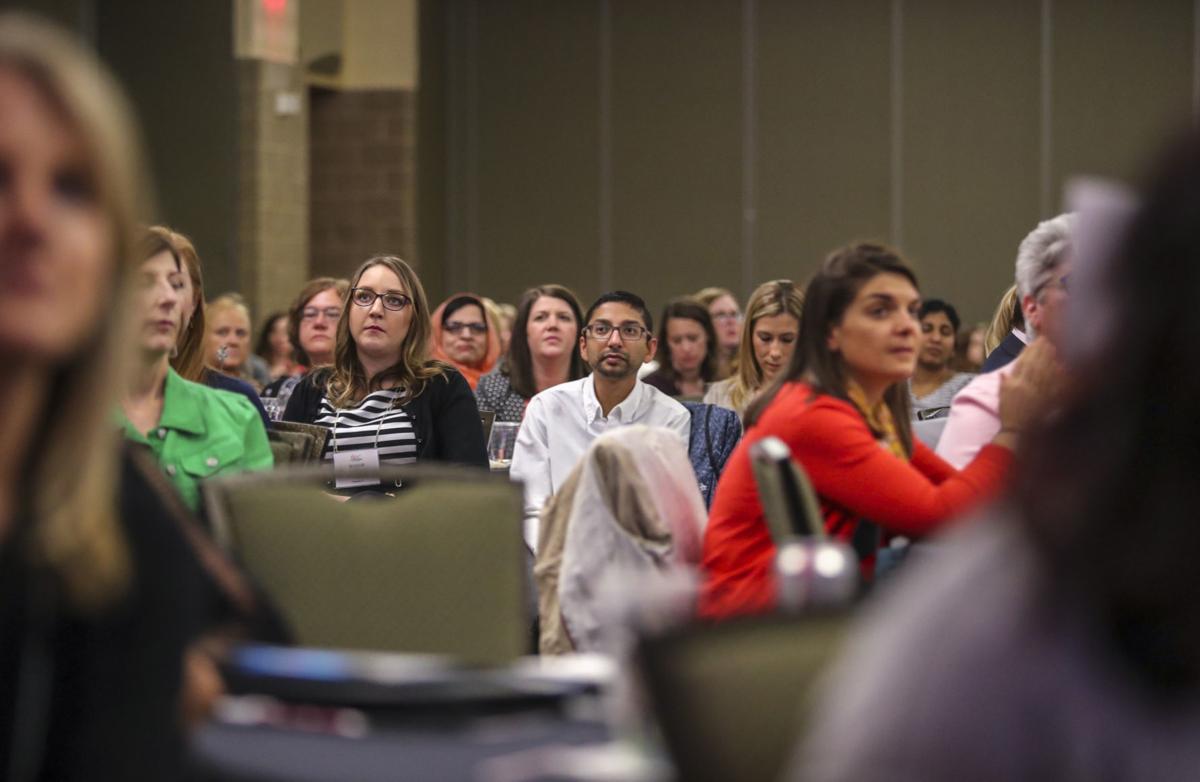 Attendees listen to broadcast journalist and television host Tamron Hall during the IWLC Quad-Cities Conference at the Bettendorf Waterfront Conference Center in 2018. The Iowa Women {& Men} Lead Change organization aims to empower, challenge and inspire people in business with a focus on developing the next generation of female leaders. 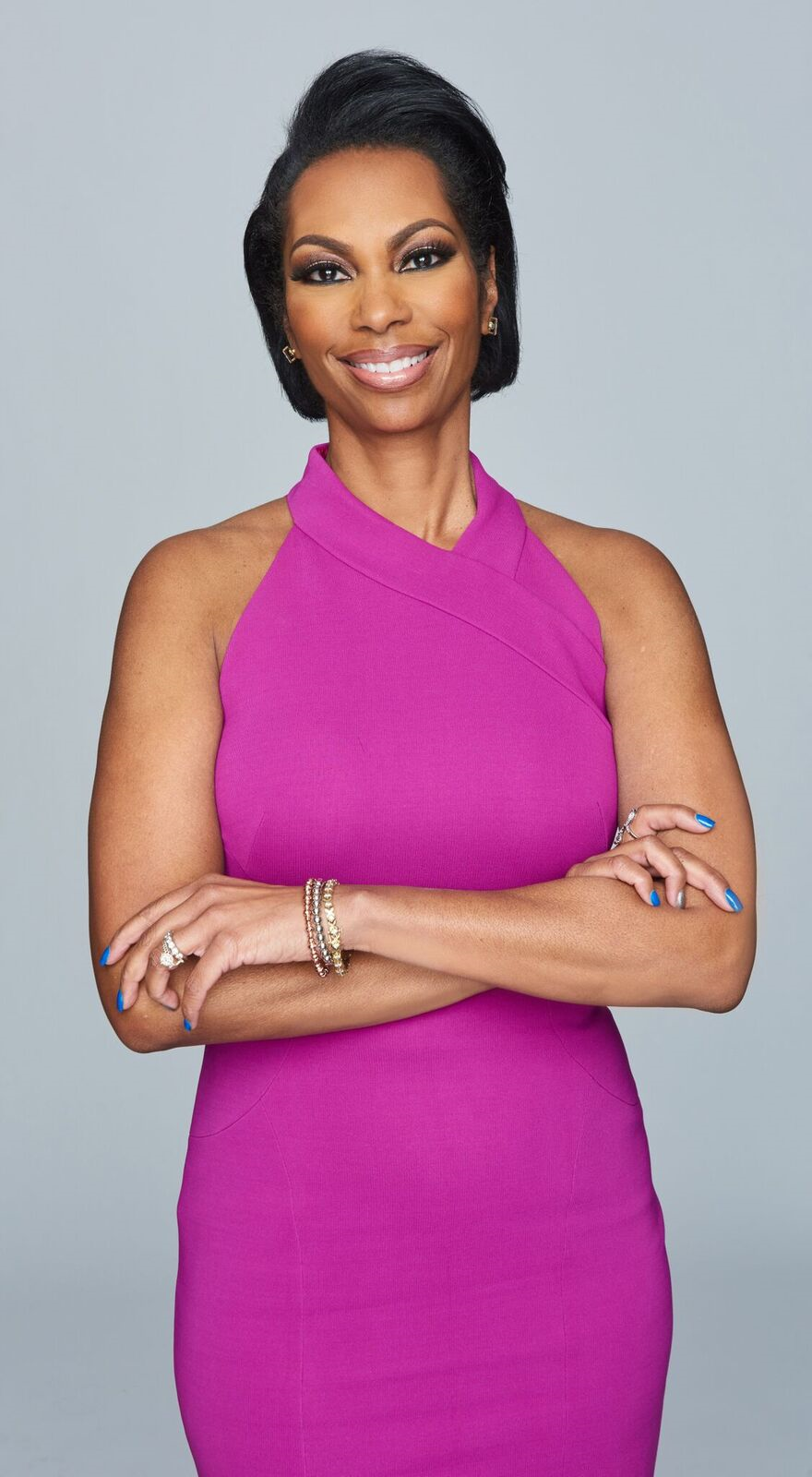 Having traveled the world in a military family, and as a TV journalist, Fox News anchor Harris Faulkner will share lessons at the Women Lead Change Quad Cities Conference at 2:15 p.m. March 7 at the Q-C Waterfront Convention Center, 2021 State St., Bettendorf.

A 53-year-old Atlanta native, she's a motivational speaker, writer and philanthropist, and joined Fox News in 2005, where she anchors “Outnumbered Overtime with Harris Faulkner” and co-hosts “Outnumbered.” She interviewed President Donald Trump on Dec. 13, 2018.

“Life is a great classroom, the only place you take the test before you have the knowledge, the wisdom beforehand,” she said Monday in a phone interview. “We're being tested all the time. Anything can happen at any moment. Who are you going to be? A few things have helped me, I will share. The greatest thing, my father taught me the incredible potential each of us have.”

Faulkner was born at Fort McPherson in Atlanta. Her father, retired Lt. Col. Bob Harris, a U.S. Army officer and Army aviator, was stationed at the base and served two tours in Vietnam. Faulkner lived in different places as a child, including Stuttgart, Germany.

“At the time, there was not equality in this country, he went away to a war that was not popular,” she said of her father. “He has told me, he would rather serve this country growing and struggling than any other. We are a beacon of light. We clothe and feed more people than any other on planet. I try to live by the adage ' To whom much is given, much is expected.'”

Her Bettendorf address will reflect what she learned in a military family, paying homage to military ideals that shaped her and showing how everyone can benefit from them.

Faulkner's new book, “9 Rules of Engagement: A Military Brat's Guide to Life and Success,” will be available June 5.

Her dad served in the Army over 20 years, and she wanted to become a fighter pilot, but then women were not in combat. “I've had the joy of interviewing a few of them who were and are, and that's pretty amazing,” Faulkner said. “I was attracted to the discipline, the chain of command. When I get ready for interviews, I really prepare, and I have a contingency plan. I loved that lifestyle, being around other military families.”

One misconception about the military is that it's completely insular, she said. “We are incredible consumers of patriotism, culture. We go all over the world in deployments. We have to be able to connect with people all over the globe...People think we're insular, only want to hang out with other military families. It's cool to share perspectives and joys apart from those who serve.”

Being raised with strength and confidence is a factor in her journalistic success, she said. Faulkner has covered many global news events, including the 2012 Sandy Hook shooting, the 2016 Republican and Democratic National Conventions, the 9/11 attacks, 2013 government shutdown, AIDS crisis in South Africa, and last year's move of the U.S. Embassy in Israel from Tel Aviv to Jerusalem.

In April 2014, Faulkner began as one of the co-hosts on the daytime Fox News show “Outnumbered.” In 2017, she become the anchor of "Outnumbered Overtime,” which focuses more on hard news. She's earned six Emmy Awards, including a 2005 Emmy for Best Newscaster and Best News Special.

She likes speaking to women's groups since she tries to be an example to her two daughters, who are in 4th and 6th grades. “I'm sowing those seeds at home. Sometimes we are not encouraged as much as we could be or should be,” Faulkner said.

“Respect and compensation should go hand in hand. Do I feel respected? Yes. But are male counterparts paid more? Of course. I live in a lane what I do is very subjective,” she said. “I'm brazen enough, I can bring two of my six Emmys, and use them as paperweights. One thing I do find challenging, I think women sometimes are so thrilled to get the opportunity to move up the corporate ladder, sometimes we don't assess our own value. We're not brazen enough to ask for it.”

“With 'Me Too,' a lot of women are finding their voice and purpose, helping each other, lifting each other up,” she said of women's rights. “You don't have to wait however long takes to feel strong enough.”

“Go to bed tired, get tired of everything you're trying to do to make your dreams come true,” Faulkner said. “Make the world a better place. Don't be exhausted by gossip; don't be exhausted by hanging out with the wrong people, not telling the truth.”

Of interviewing the president, she was thrilled, and said: “What I loved about it, he listens. He knows there are a lot of critics out there. He has his own vision, own ideas about doing things. They are something he has thought about as a businessman, not a career politician.”

Faulkner was criticized for asking Trump what he loved about the job, but said that's something she asks every leader and lawmaker. “Why do you do it, what do you love about you do?” she said. “Some in the media, there's a cottage industry of hating. It's the office of the presidency, you want to know as much about it as you can. Everything cannot be a grimace. I believe people despise what they do not understand.”

Of Trump, she said: “He loves to get things done; I've never seen anyone with that energy before.”

“Look, you don't wing a second summit with Kim Jong Un,” she said of his preparations. “I don't know how much he does or doesn't read. I do know it's his style to be off the cuff, sometimes more than people are comfortable with. Look at all players part of this; I know the preparation that goes on. Whatever he chooses to go off the cuff with, he feels like he's prepared for.”

At the March 7 conference, other keynote speakers include best-selling author and radio personality Samantha Ettus; America’s first African-American female combat pilot Vernice “Flygirl” Armour, and entrepreneur and best-selling author of “Molly’s Game,” Molly Bloom. Tickets, at $200 per person and $99 for students, are available at wlcglobal.org/events/quad-cities-conference.

East Moline library board member's sister had collected more than 50,000 pieces of jewelry before she died. On Saturday, her rings will go on sale to fund the library’s new building

James Hoffman inherited thousands of collectibles from his sister, Rebecca Hoffman. Now, a portion of her trove — her costume rings — will go up for sale on Saturday at the library, with all of the proceeds going to the East Moline Public Library’s new building campaign.

Eldridge man charged with murder in shooting death of wife

An Eldridge man has been charged with first-degree murder in relation to the shooting death of his wife on June 10, according to a Monday news…

A Davenport man was sentenced on Wednesday, Nov. 23 to three years in federal prison for gun charges.

Attendees listen to broadcast journalist and television host Tamron Hall during the IWLC Quad-Cities Conference at the Bettendorf Waterfront Conference Center in 2018. The Iowa Women {& Men} Lead Change organization aims to empower, challenge and inspire people in business with a focus on developing the next generation of female leaders.