Flooded cars parked next to the Peterson Paper Loft Apartment building on Pershing Avenue at East 2nd Street in Davenport after a flood barrier was breached by Mississippi floodwaters on Tuesday. 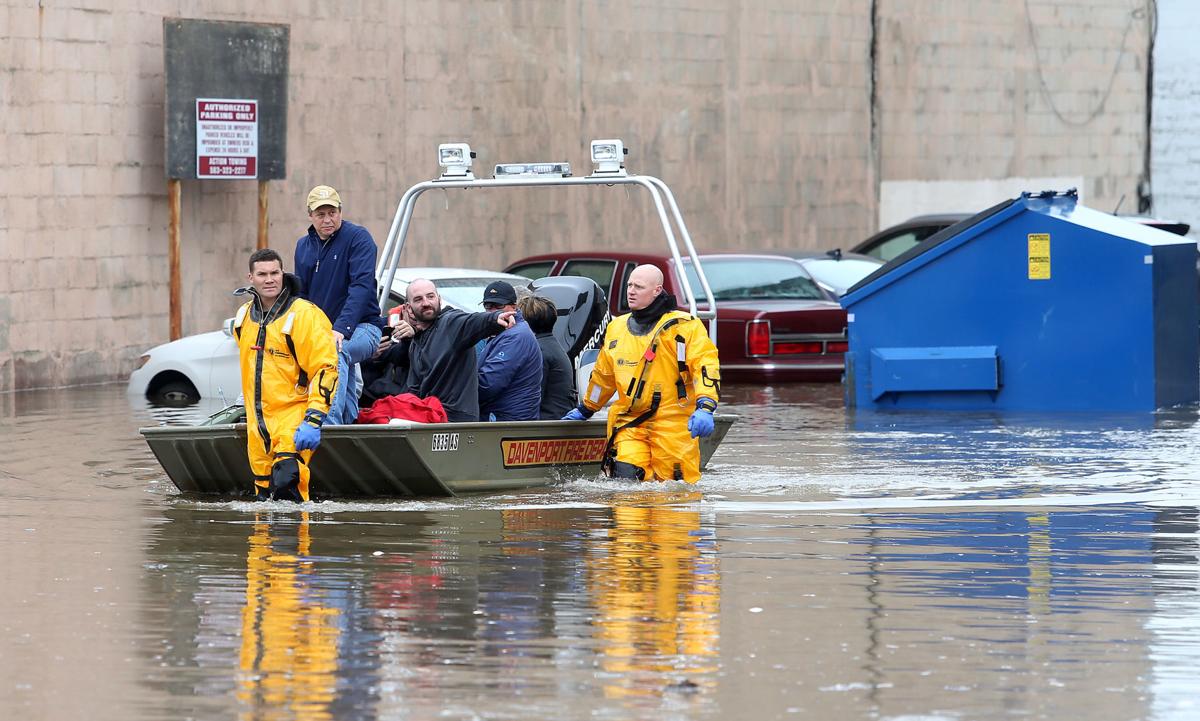 Rescue personnel use a boat to evacuate people from the Peterson Paper Co. Building Tuesday after a floodwall was breached by the Mississippi River causing water to flood alleys and buildings up to and including Second Street.

As the Mississippi River heads toward a predicted crest of 22.4 feet Wednesday evening, Cornelia Mutel, of the University of Iowa, says the area can expect similar crests more frequently, largely because of climate change.

Mutel, with the IIHR-Hydroscience and Engineering Center at the university's College of Engineering, said the Midwestern climate is becoming hotter and wetter.

Between 1901 and 2016, Iowa's annual average temperature rose about 1 degree F, with the greatest increase occurring since 1980. Although that may not sound like much, "the implications are profound," she said in an email.

In addition, heat is a form of energy. "Thus our hotter, moister skies are producing more intense extreme weather events," Mutel said. "In the Upper Midwest, very heavy precipitation increased 37 percent between 1958 and 2012.

"With more precipitation, especially in the springtime, more spring and early summer flooding would be expected," she said.

"More humidity and heat, bearing down on us with increasing intensity — these are the signatures of Midwestern climate change," she wrote.

People who study weather know humidity is increasing because monitoring stations across the state have recorded an increase of 2 to 4 percent in absolute humidity per decade since 1971, with the greatest rises in the eastern half of Iowa, especially during the months of April, May and June.

Iowa's annual precipitation has gone up about five inches from a statewide average of 31-32 at the beginning of the 20th century to around 36 inches today. Most of that increase has occurred since 2000 and (like humidity), higher rainfall is concentrated in the spring months of April, May and June.

Gerry Galloway, a flood management expert from the University of Maryland, and Chad Berginnis, director of the Association of State Floodplain Managers, agree that the Midwest can expect more frequent flooding. They both spoke last fall at the Upper Mississippi River Conference in Moline, sponsored by River Action Inc.

Once-in-a-lifetime flood levels are becoming a far more frequent occurrence, Galloway said. Galloway is the author of a landmark report on the 1993 floods in the Midwest, which still stand as the record.

Latest: Photos from flooding in the Quad-Cities

PHOTOS: Flooding across the Quad-Cities