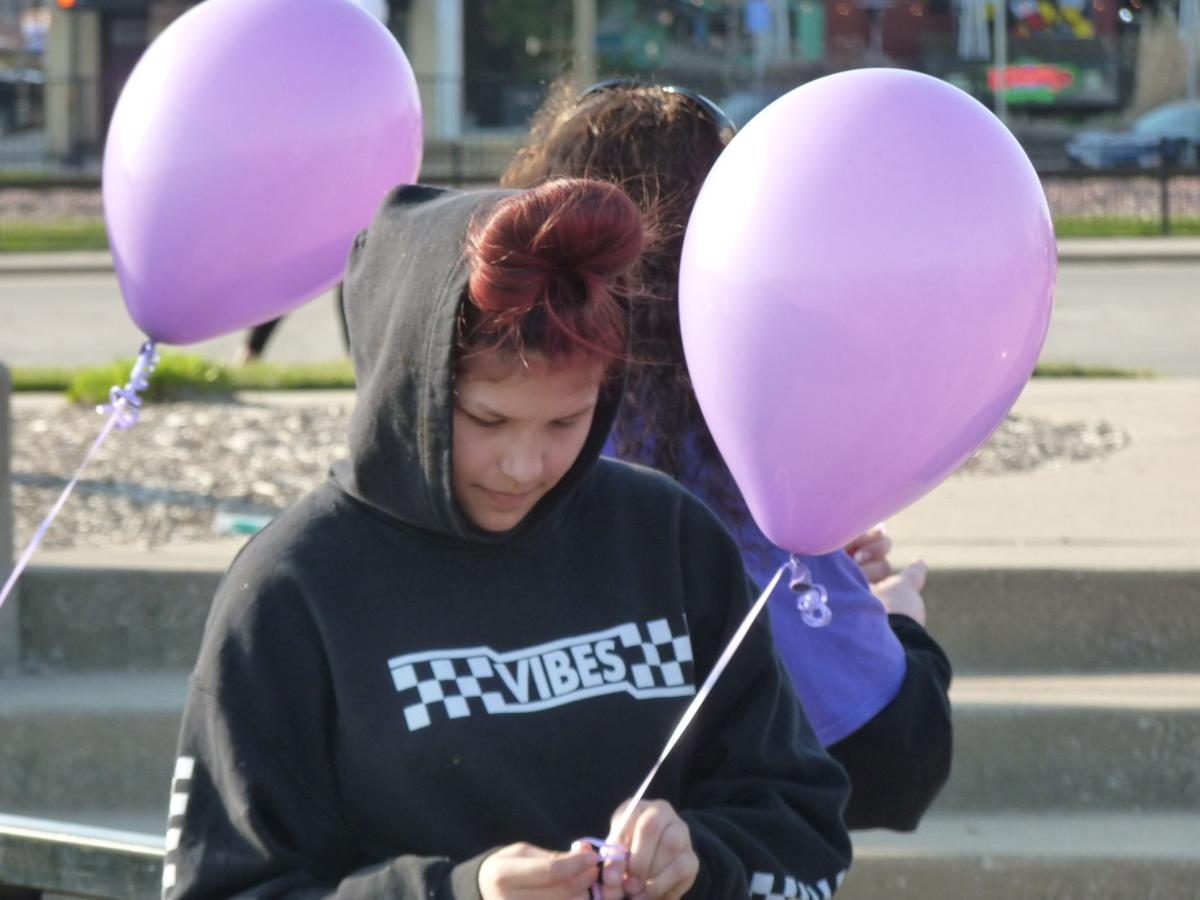 Josalyn Hernandez ties a purple balloon on the railing between Muscatine and the Mississippi River in honor of Breasia Terrell on Saturday. 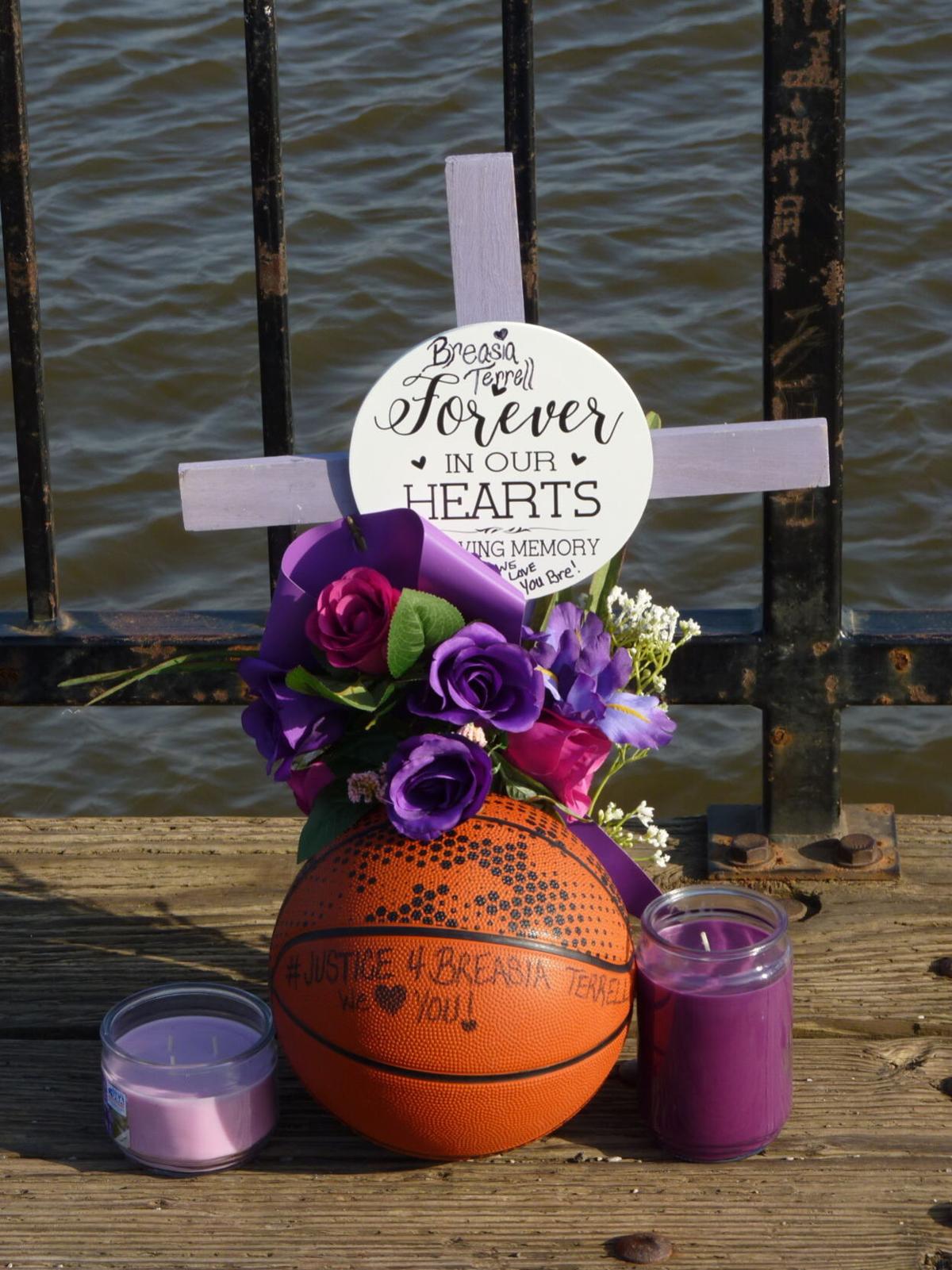 A memorial for Breasia Terrell was placed on a dock on the Muscatine riverfront Saturday as part of a vigil honoring the life of the 10-year-old. 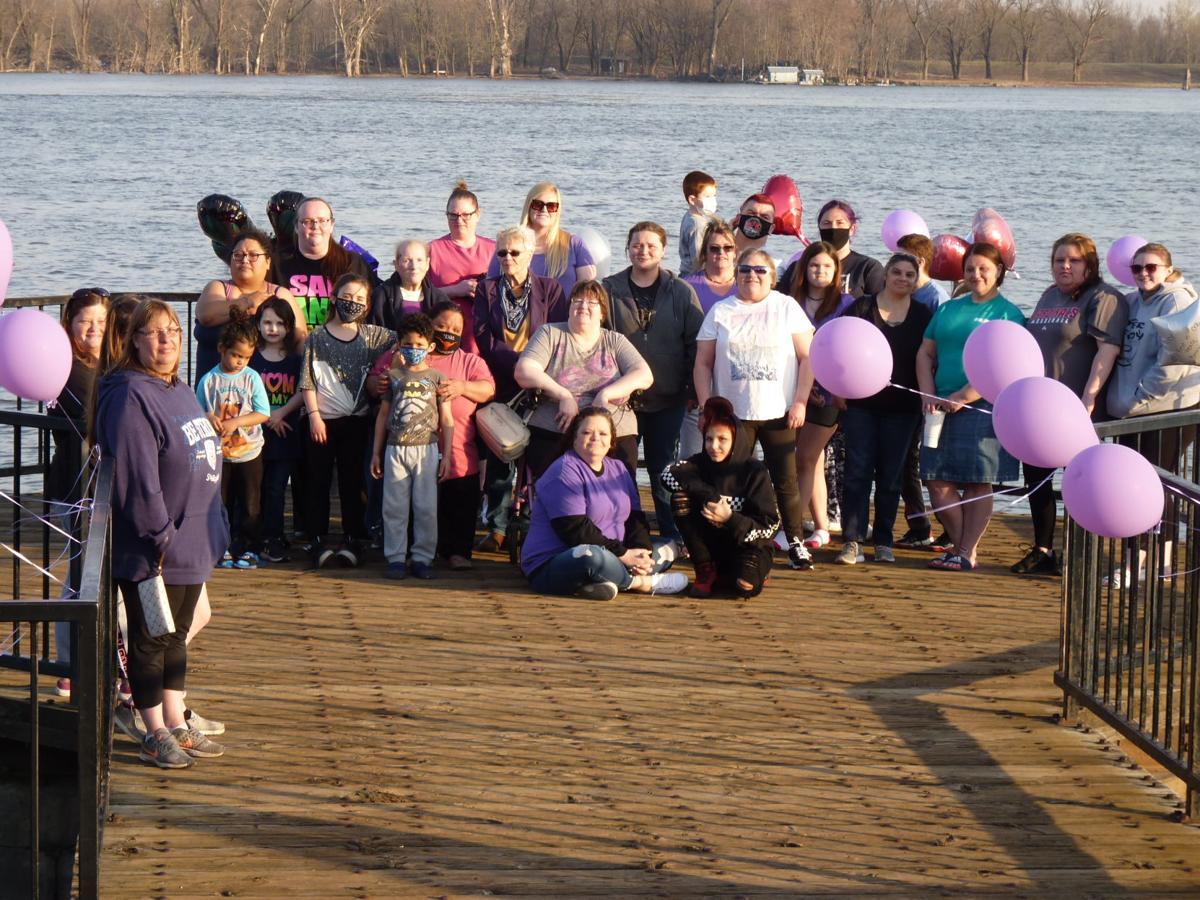 Dozens of people from Muscatine gather on the Muscatine riverfront Saturday to honor the memory of Breasia Terrell, who had been missing since last July.

MUSCATINE — Last July it was a dock in the middle of the Muscatine riverfront where April Hernandez held a prayer vigil to ask God to deliver 10-year-old Breasia Terrell home safely. On Saturday, it was on the same dock that Hernandez and a group of about 30 gathered to honor Breasia’s memory.

Taking a cue from people in Davenport who wished to show support for Breasia’s family, to mourn her loss and to cherish her memory, people along the riverfront came dressed mostly in purple, Breasia’s favorite color. Purple balloons were flown. A cross along with a basketball (a game Breasia loved) were placed at the end of the dock. As 6 p.m. came, all present bowed their heads in prayer as attendee Marisa Vargas said the prayer.

“We thank you Lord God for carrying her up on the wings of angels right now,” Vargas prayed.

Davenport police reported Wednesday that human remains found by fishermen on March 22 had been positively identified as Breasia, who had been reported missing on July 10 after staying overnight at the home of her half-brother’s father, Henry Earl Dinkins, a convicted sex offender who is a person of interest in the case. No arrests in her death have been made. Dinkins remains in custody for sex offender violations not related to Breasia’s disappearance.

Hernandez had volunteered with a few friends from Muscatine to go to Davenport while the search for Breasia was being held. She had decided to organize a memorial event in Muscatine as many people who cared about Breasia were unable to attend the Davenport memorial held last Thursday.

“I have a child that age, and I would hope if my child was missing that someone would be out there helping me as well,” Hernandez said.

She explained when she learned Breasia was missing and knowing the heartbreak her mother must have been going through made her want to help. Feeling a great bond with the communities of Muscatine and the Quad-Cities, Hernandez did what she could to help. She commented that like most involved, “I was hoping for a better outcome.”

Even with a healthy wind blowing in from the river, Wendy Musgrove and her 10-year-old granddaughter, Addison Mawby, helped tie balloons to the dock. Musgrove said it had really hit home that Breasia and Addison were the same age and from the same general area. They had also helped with the search and had followed her story. A hiker, Musgrove began turning a normal hike into a scout for any trace of Breasia.

“I just hope (Breasia) can see all the people that did love and care for her,” Musgrove said. “The children need to come before everything, and they need to be protected.”

When news that Breasia had been found was announced, Vernalee Pameticky had to leave work when the heartbreak of what she had heard hit her. She had also been part of the search for the 10-year-old.

As the event continued, several families joined the event to place purple balloons (which were hard to come by in Muscatine) on the dock. Several flower bouquets were added to the memorial.

As the people who attended the event gathered around the memorial, Hernandez said that she hopes parents are careful with the people they allowed their children to be around.

Nearly eight months after a boating crash in LeClaire killed two people, few details have been revealed by the agency investigating the crash,…

Former Republican Illinois U.S. Rep. Bobby Schilling, who represented the Quad-Cities, died Tuesday from cancer, according to his son.

A Moline High School teacher is on leave after allegedly sharing a homemade sex video on SnapChat in November, where it was seen by multiple s…

A Rock Island attorney was sentenced to 60 months probation Tuesday for possession of a controlled substance and methamphetamine delivery.

Update: One dead in officer-involved shooting in Rock Island

One person has been confirmed dead after an officer-involved shooting Thursday at the Kum & Shop, 2961 11th St., Rock Island.

Josalyn Hernandez ties a purple balloon on the railing between Muscatine and the Mississippi River in honor of Breasia Terrell on Saturday.

A memorial for Breasia Terrell was placed on a dock on the Muscatine riverfront Saturday as part of a vigil honoring the life of the 10-year-old.

Dozens of people from Muscatine gather on the Muscatine riverfront Saturday to honor the memory of Breasia Terrell, who had been missing since last July.