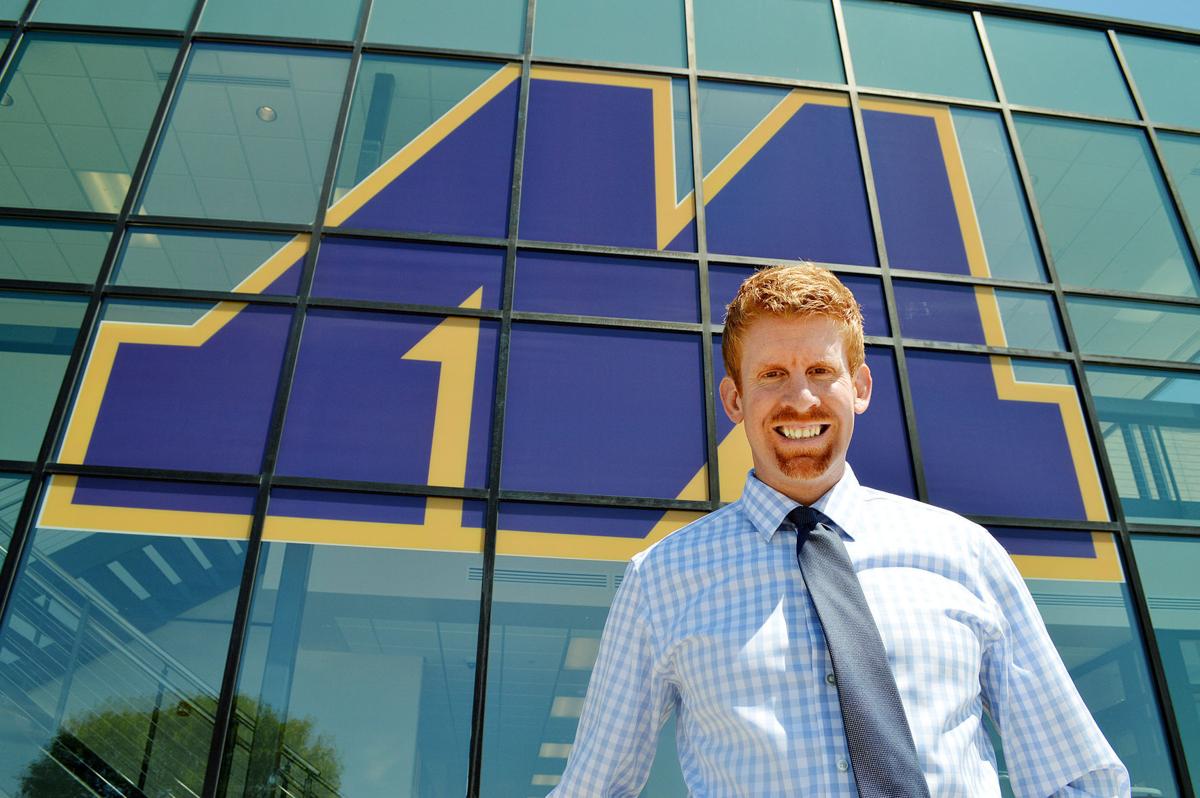 Jared Smith started his job as new principal of Muscatine High School on July 1. He was previously an assistant principal at East Waterloo (Iowa) High School. 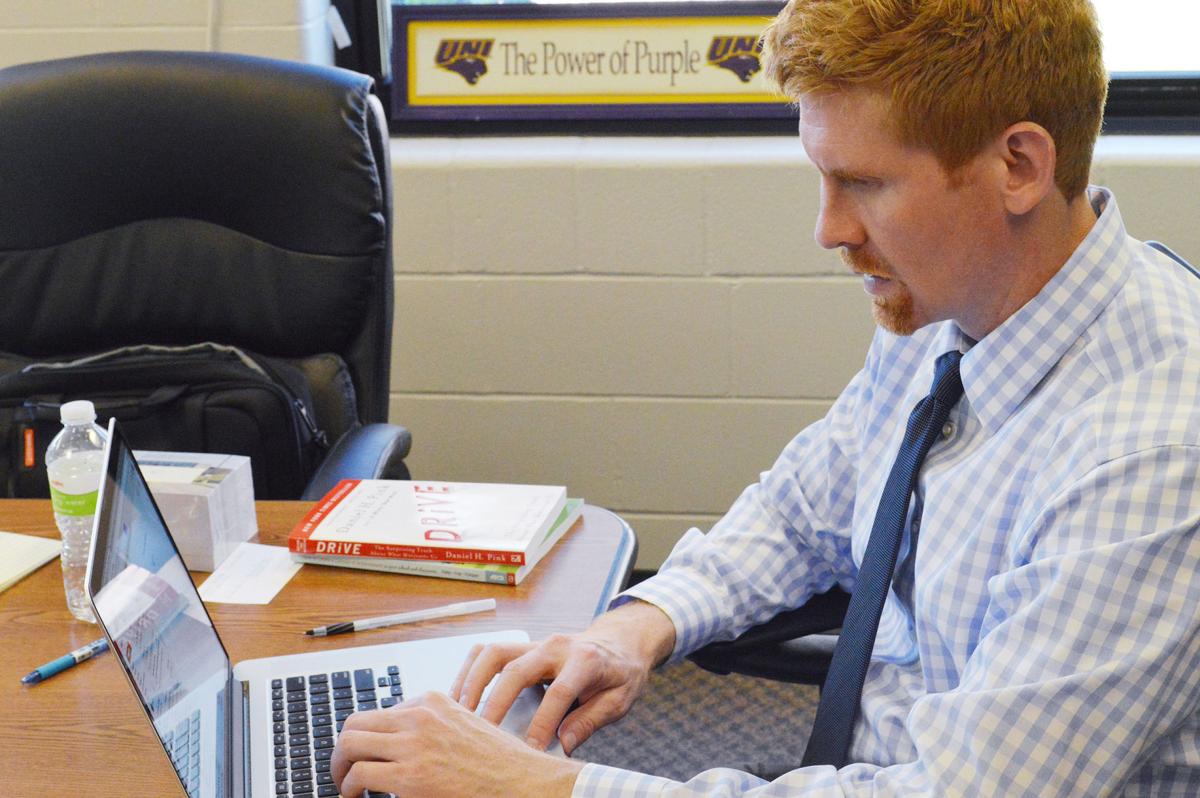 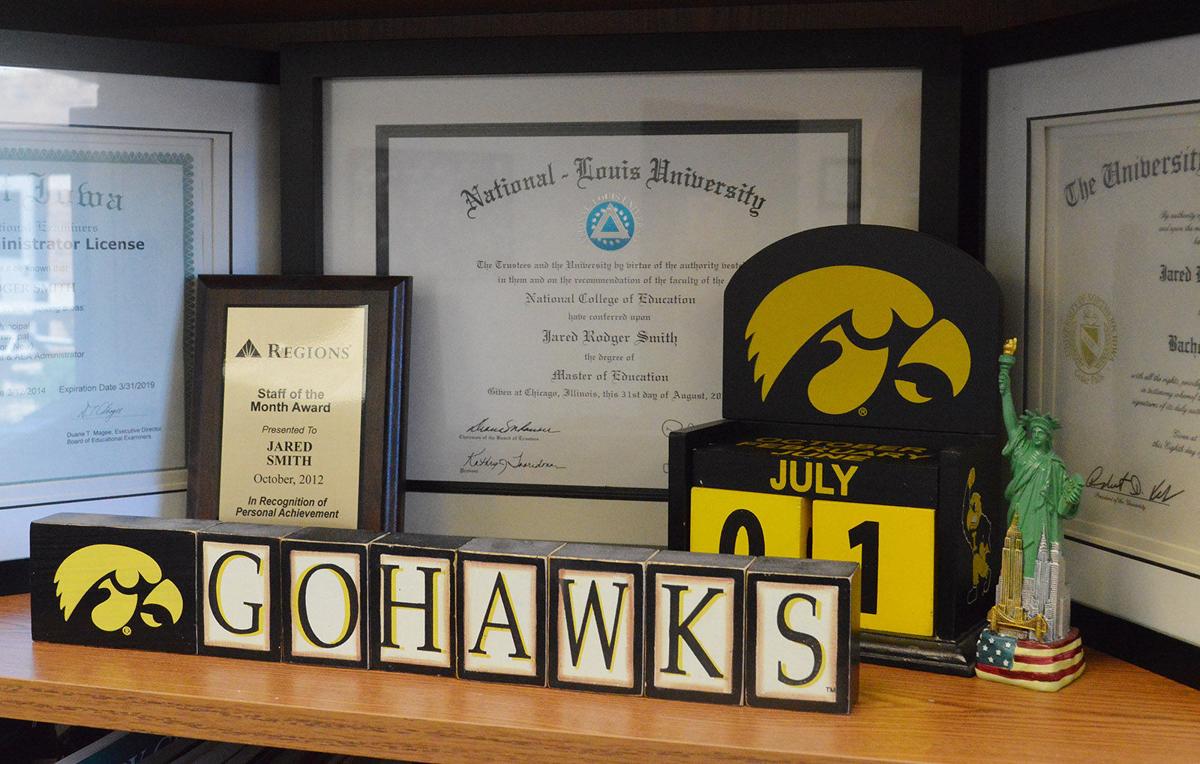 Academic degrees earned by new Muscatine High School Principal Jared Smith are displayed in his office. He earned his bachelor's degree from the University of Northern Iowa in Cedar Falls and his master's degree from National-Louis University.

Smith was named to the position of MHS principal in February and officially started the job July 1. Since then, he has been drawing on his experiences as an educator in transitioning to the new job as well as building relationships with the students and staff.

Smith's new chapter is beginning with a balancing act as he is not only starting a new job, but getting married in September to his fiancée, Lindsay Fischer, and building a new home in Muscatine.

Even with all that, Smith said he is actually having fun with the craziness.

“It’s given me a little of anxiety, but that was mostly before the move,” Smith said. “Now it’s been a fun anxiety.”

Smith is a native of Minneapolis, Minn., but moved to Waterloo, Iowa, as a youngster and attended elementary school there. Some of Smith’s leadership qualities were developed at that time when he was elected class president. He carried those qualities into high school when he decided to tutor other students.

“In high school, I had an opportunity to tutor middle school students,” Smith said. “I would go down once a week and tutor. The feedback I got from students was ‘Man you’re really good, you really helped me out.’ So I was like ‘oh, I’m pretty good at this teaching thing.’ "

With that in his mind, Smith decided to become a teacher during his junior year of high school and attended the University of Northern Iowa in nearby Cedar Falls. He earned a degree in elementary and middle level education and a minor in math.

After graduating college, Smith journeyed south to North Port High School in North Port, Fla., to teach math and coach for the cross country and basketball teams. He said he wanted to go to Florida to “get away from Iowa for awhile.”

He also said this was the hardest part of his career because of the large number of students in the school, which he estimated was around 3,000. He saw and experienced what it was like to teach a lot of students who came from difficult backgrounds.

While he was teaching in Florida, Smith earned his master’s degree from National-Louis University in Tampa, Fla.

Smith said he friends pushed him to pursue the master's degree.

“My first year of teaching, there were a few other guys that were doing a school administration master’s and I was like ‘I don’t think I’m ever gonna use this, but I'll join you guys’ and I’m so glad I did.”

After earning his master’s, Smith left Florida to go join his brother in Chicago and was a math teacher and football coach at Ogden (K-8) Elementary School in the Chicago Public School system for one year.

But even though he was back where he had grown up, Smith didn’t stay as he found the position at Muscatine via TeachIowa.gov and knew he had to apply.

“For any school administrator, your goal should be to become a head principal,” Smith said. “Here at Muscatine, you have a 1,500-1,600 student population and when you have a chance to lead, you can’t give that up.”

Since he arrived, Smith has been trying to memorize the layout of the school and get to know some of the students and staff.

When Smith isn’t doing principal duties, he likes to work out or read.

The books Smith reads aren’t entirely for entertainment. Many of them are related to leadership and becoming a better leader. One book that Smith is reading is called "Drive: The Suprising Truth about What Motivates Us." Smith said he reads them to help reaffirm his ideas and to learn new ones, while continuing his philosophy of being a “continuous learner.”

That philosophy has led Smith to meet with other principals in the Muscatine school system to get some pointers from them and see what he can implement at the high school.

Smith said he wants to make some change during his time as principal, but won’t alter things too much because he said the school is “on the right path.” But he does have two goals.

“Our two main goals are to reduce the number of F’s and improve our students' college readiness,” he said. “We’re focusing on ninth-graders and possibly adding more rigorous courses.”

Smith said one of the strengths of the new administration will be professional diversity. In addition to Smith’s experiences at different schools, the new assistant principal, Mark Groteluschen, is bringing his perspective after working at Metro High School in Cedar Rapids.

Groteluschen said he is ready for the new year and excited for how Smith will perform.

“I’m excited for it and talking to him, you can see he has a passion for the students,” Groteluschen said.

Smith is working on his Ph.D. in Educational Leadership through Iowa State University. He is looking to earn it by winter.

Jared Smith started his job as new principal of Muscatine High School on July 1. He was previously an assistant principal at East Waterloo (Iowa) High School.

Academic degrees earned by new Muscatine High School Principal Jared Smith are displayed in his office. He earned his bachelor's degree from the University of Northern Iowa in Cedar Falls and his master's degree from National-Louis University.