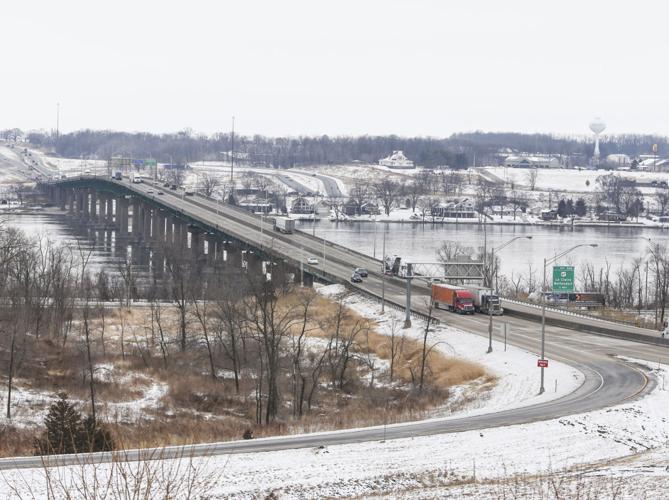 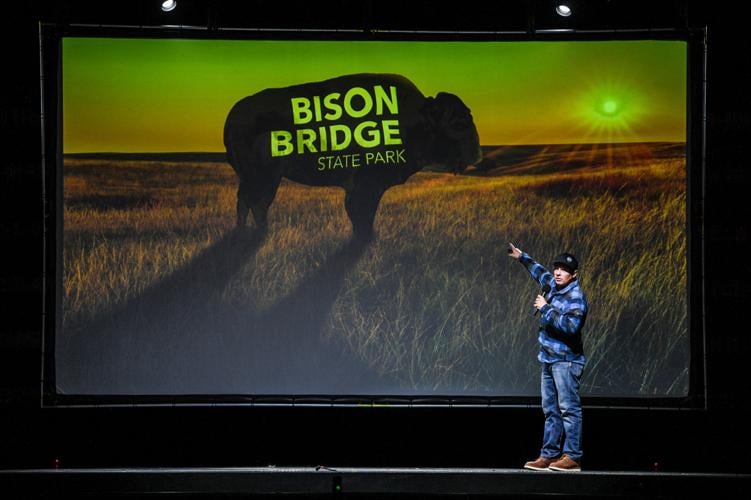 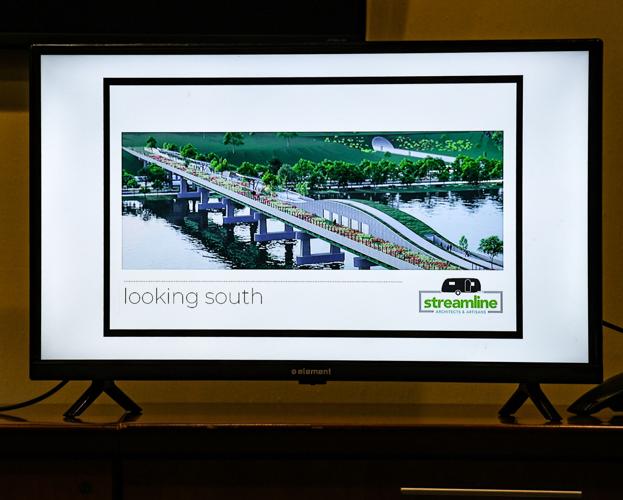 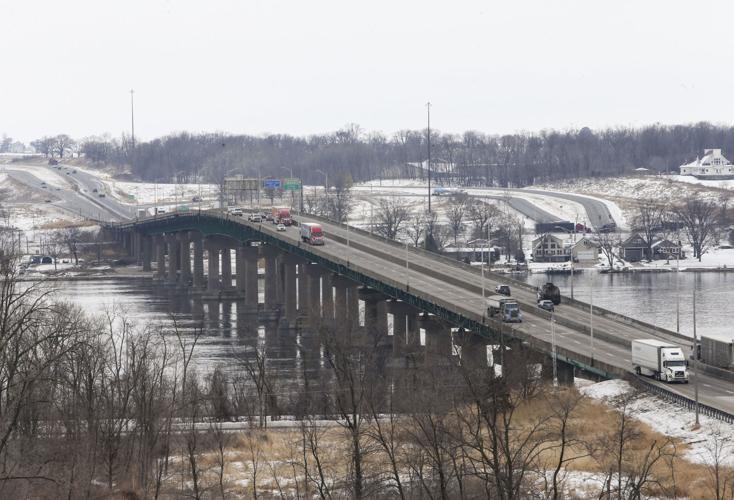 The wheels have been quietly turning for years.

On Thursday, the time finally came for Quad-City environmentalist Chad Pregracke to reveal what he’s been working on: A bid for a national park that would place a small herd of bison atop the Interstate 80 bridge.

As Pregracke warned, the Bison Bridge idea is “way outside the box.”

This is not to say it’s a pipe dream.

Behind-the-scenes progress is real. Funding is partly in place. Many of the governmental powers-that-be either endorse the idea or have helped work on it. And the timing is right, they say.

Here is the plan:

The current Interstate 80 bridge (Fred Schwengel Bridge) between LeClaire and Rapids City is being replaced. The Illinois DOT has budgeted $17 million this fiscal year for engineering studies.

Another $300 million-plus is devoted to the project in the longer term.

Pregracke’s plan would use the vacated bridge and state-owned land on either side of it to create either two state parks or — ideally — a national park that crosses over the Mississippi River.

Pregracke and his team at Living Lands & Waters (along with hundreds of volunteers) have for several years been restoring the natural prairie along this corridor.

While the environment is always at top of mind, his chief goal is to deliver a project that would “put the Quad-Cities on the map.” 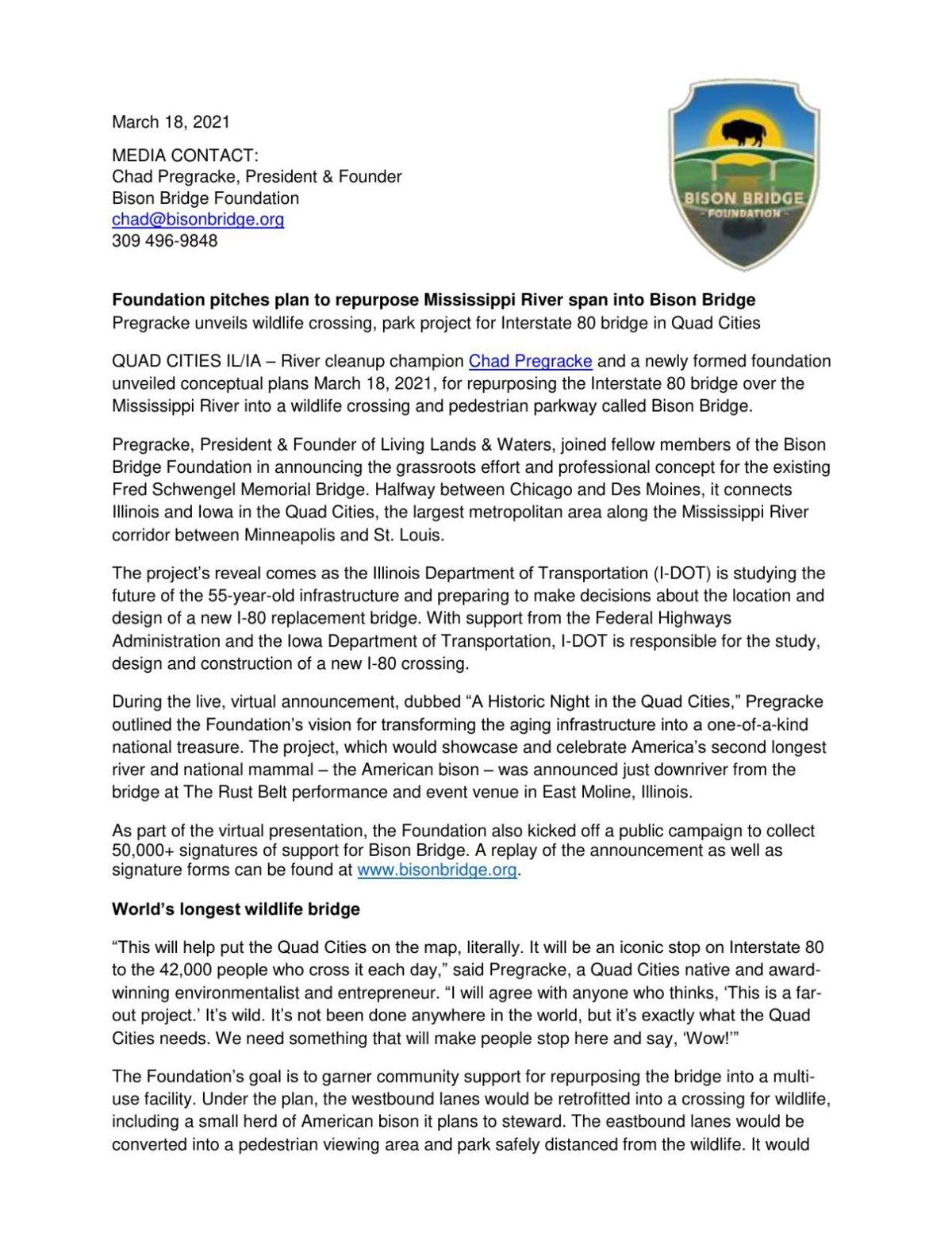 Interstate 80 is the second-longest interstate highway system in the country, stretching nearly 3,000 miles between San Francisco and (just outside) New York City.

“The bridge carries 42,000 vehicles a day, and families remember going over the Mississippi River here, but that’s about it,” Pregracke said during a pre-reveal of his plans last month at the Quad-City Times and Moline Dispatch-Argus. “They’re not stopping, not even for gas.”

“It’s a must-stop. And it’s not just a summertime deal.”

To make sure Bison Bridge is a year-round attraction, the plans place a visitor center directly on the span. The pathways will cross over it, giving added height to the river vistas.

Trees will be planted to provide shade.

“It would be the largest wildlife bridge in the world,” Pregracke said. “I’m not building a bridge. It’s already there.” 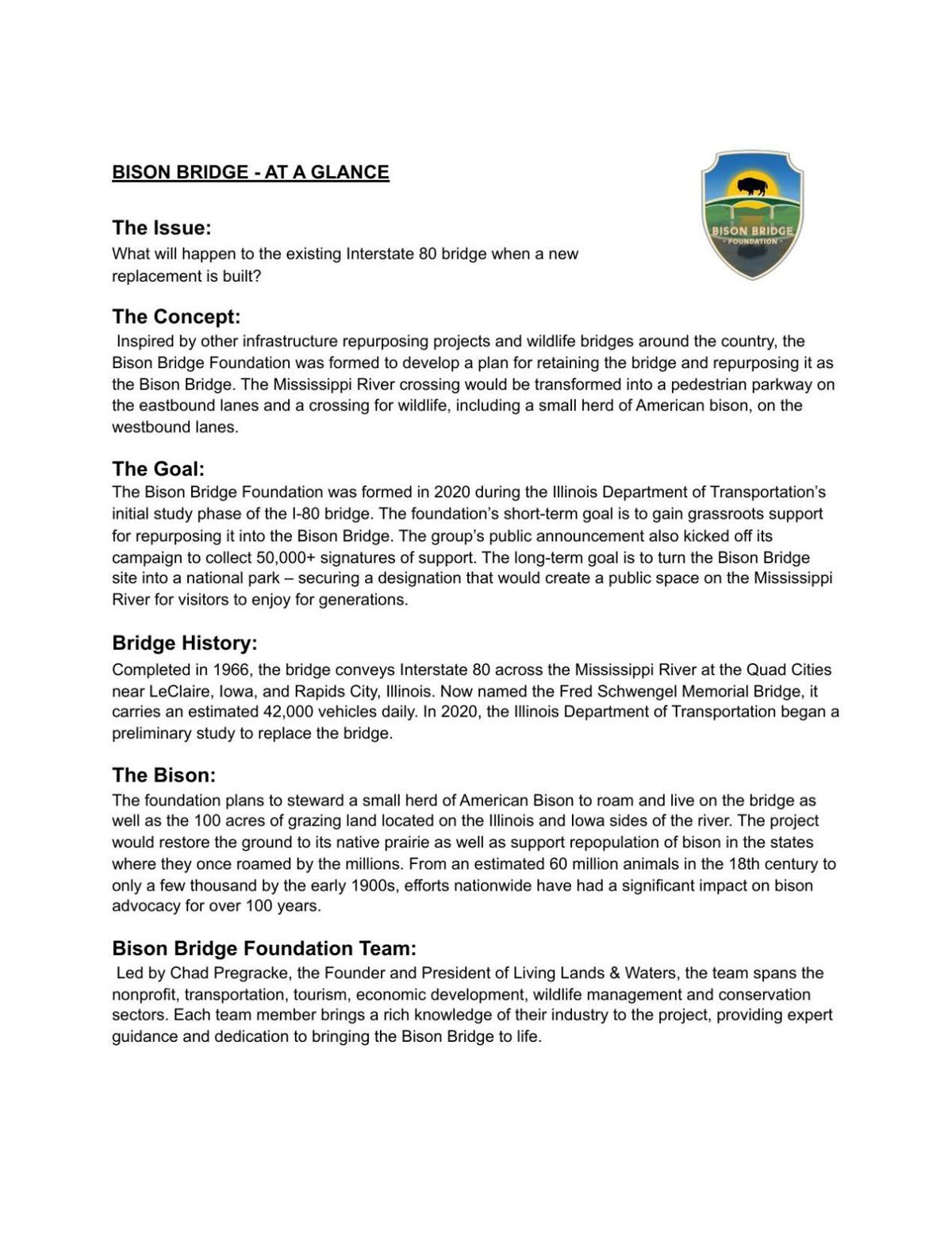 Progress on Pregracke’s plan has advanced to the point that his 11-member team meets every week.

As the Illinois DOT is the lead agency on the I-80 bridge replacement, Pregracke recruited two high-ranking retirees to his team.

Matt Hughes was an administrator for the DOT. He is a registered lobbyist and consultant and was Pregracke’s college roommate.

Also from the DOT, Kevin Marcheck was an engineer for nearly 40 years, covering a 19-county area surrounding Chicago.

The pair knows how to get transportation projects done, including federal partnerships. Federal highway dollars make up the majority of the bridge-replacement costs, but another area leader spotted another opportunity.

“(U.S. Rep.) Cheri Bustos is the one who came up with the idea for a national park,” Hughes said. “The timing couldn’t have been better.”

Bustos said the credit for creative ideas belonged to Pregracke.

“He thinks big and plans big,” she said. “It is people like Chad who make a community all it can be — and more.

“His idea for the Bison Bridge is something that could make our region of our state, our nation — even our world — a place where families don’t just go, but seek.”

Mike Wolfe, the treasure hunter who created “American Pickers,” also is lending his name and support.

Where it is today

Pregracke estimates a combined total of 65 acres of greenspace and prairie is available on either side of the 80 bridge.

The wildlife that dwell in Bison Bridge park would roam freely from one state to the other via the dedicated and well-fenced bridge lane.

But it is not impossible that the Illinois DOT could opt to rebuild the existing bridge, rather than building new on the upstream or downstream side.

As the Quad-Cities learned with construction of the new Interstate 74 spans, bridge-building is a long-range proposition.

But the I-80 replacement has been in the works for many years, too.

Pregracke’s team estimates taxpayers would save between $30 million and $40 million in demolition on I-80 if Bison Bridge happens.

Historic photos: Building the I-80 Bridge

He has private-party interest in investing, he said, and the ongoing maintenance of the super structure would be paid through a Bison Bridge Foundation.

As founder and CEO of Living Lands & Waters, Pregracke already has proven himself as an environmentalist with a gift for inspiring volunteers and getting tough jobs done.

He has been focused on the I-80 bridge corridor for many years, and his team from Living Lands returned a tornado-ravaged section of former prairie on the Illinois side of the bridge back to its natural state.

Downed trees and invasive species were removed and hundreds of new trees and native wildflowers were planted.

The prairie restoration success showed what Pregracke and his partners are capable of, he said. And it created an almost-literal outline for what could become the nation’s newest park.

The 28-acre land restoration became the largest in the Illinois DOT's history.

What's the deal with the Bison Bridge?

The alignment for the new Interstate 80 bridge at LeClaire and Rapids City has not yet been decided, but supporters of the proposed reuse, Bis…

The Bison Bridge Foundation will take the bison to different summer events, including the Freight House Farmers' Market.

Inside Dubai center where sick turtles recover before returning to sea

More than 2.2 million people in the U.S. live without running water and basic indoor plumbing

More than 2.2 million people in the U.S. live without running water and basic indoor plumbing