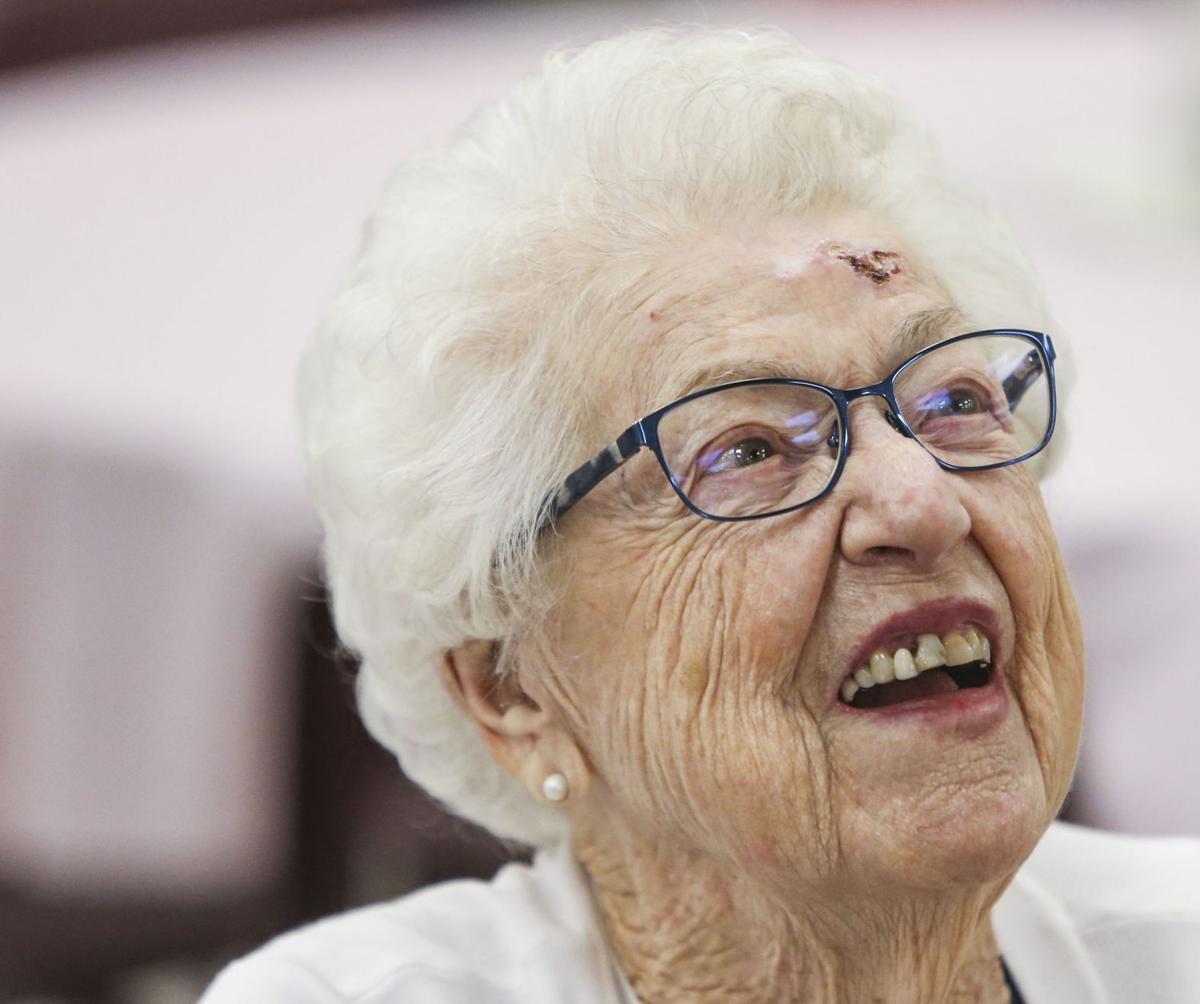 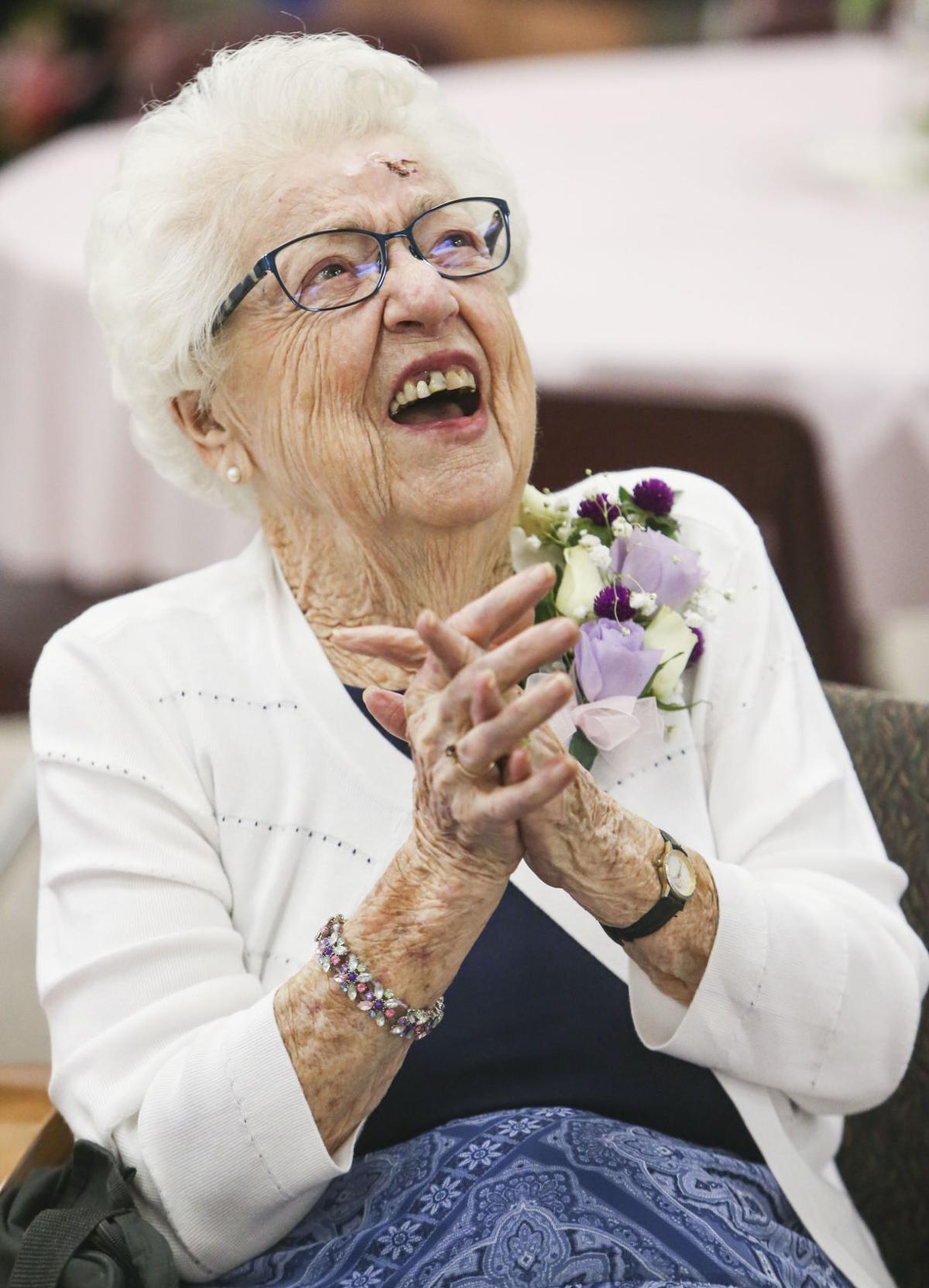 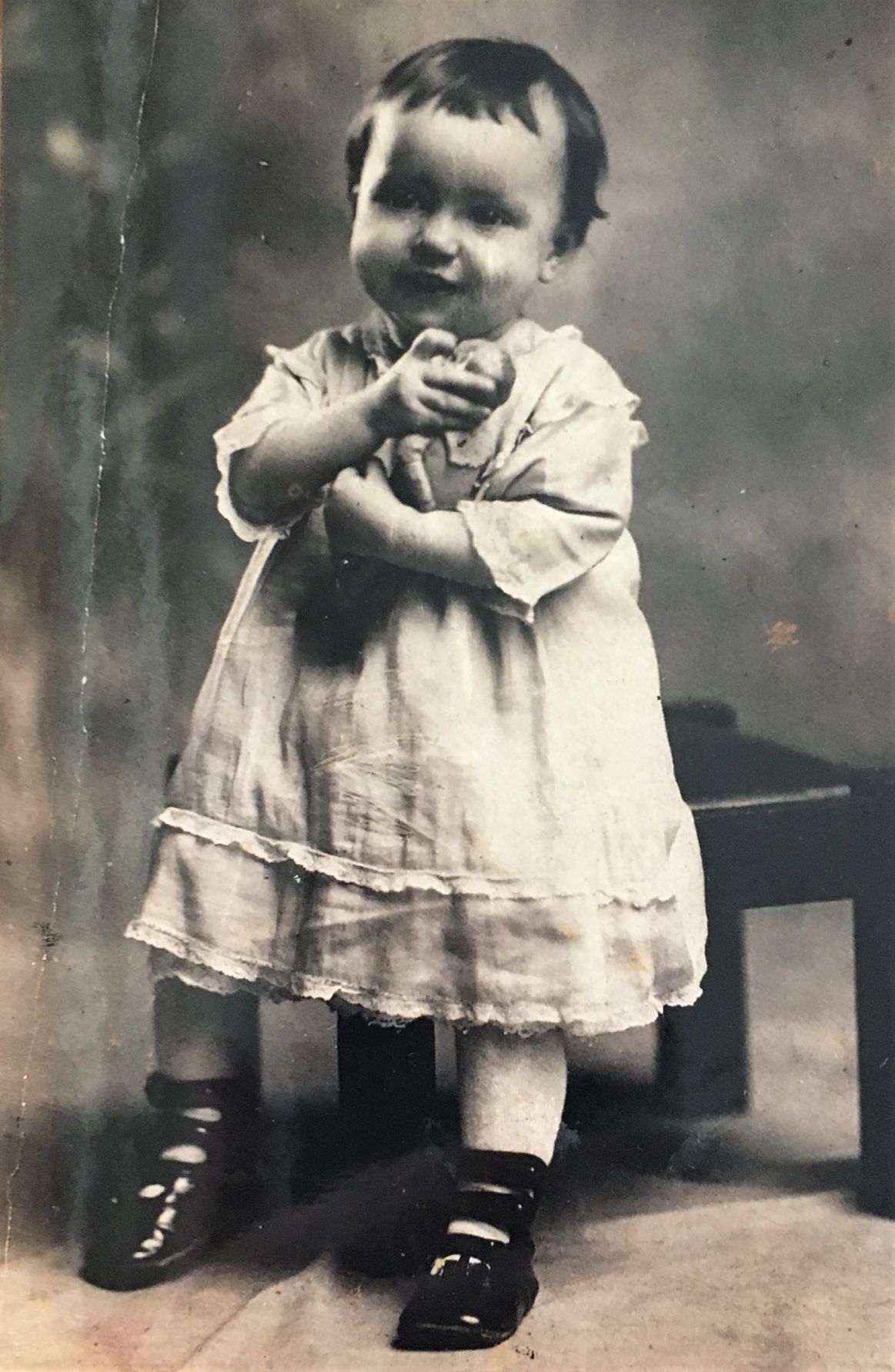 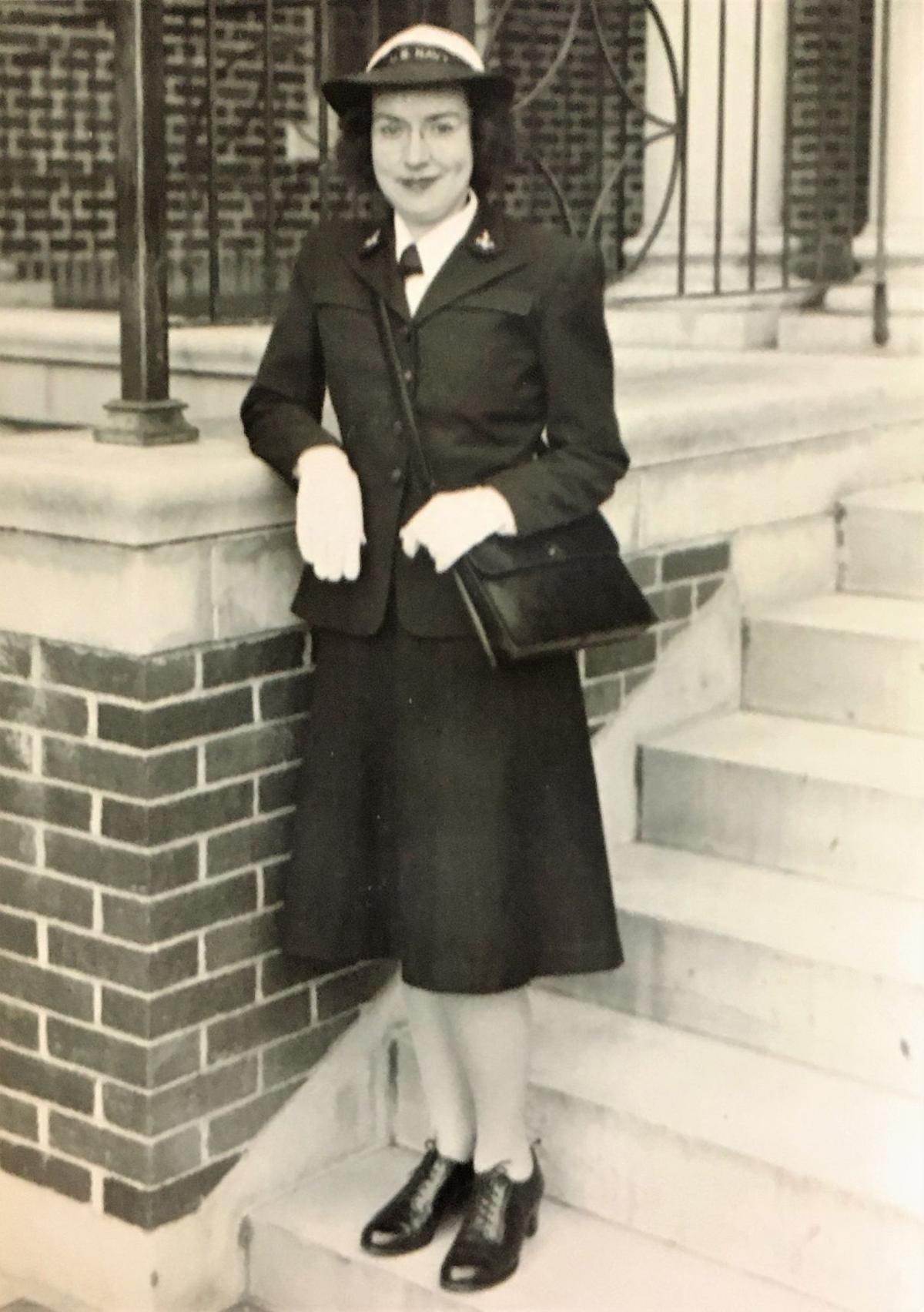 Jane Cronkleton as a member of the Navy during World War II. 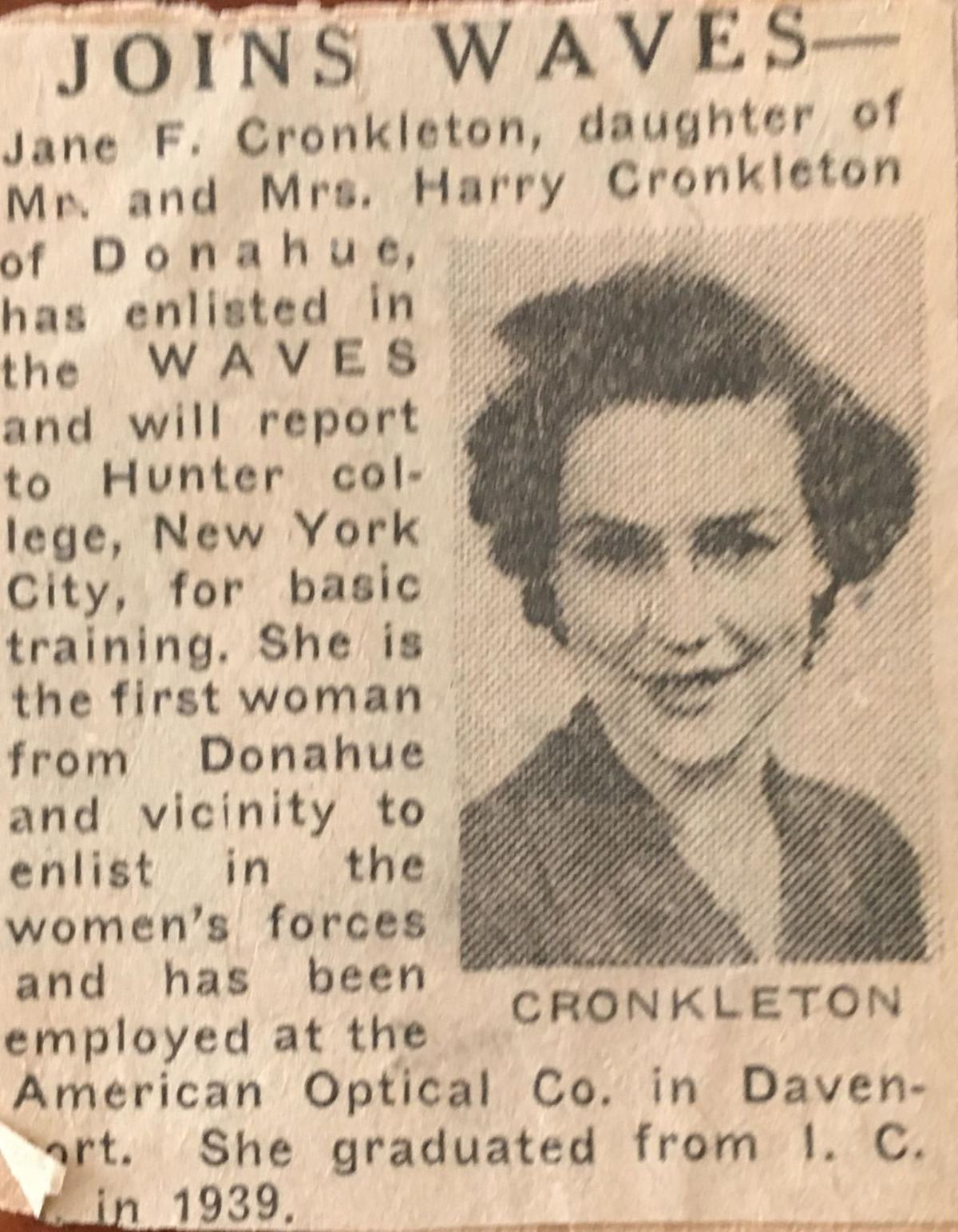 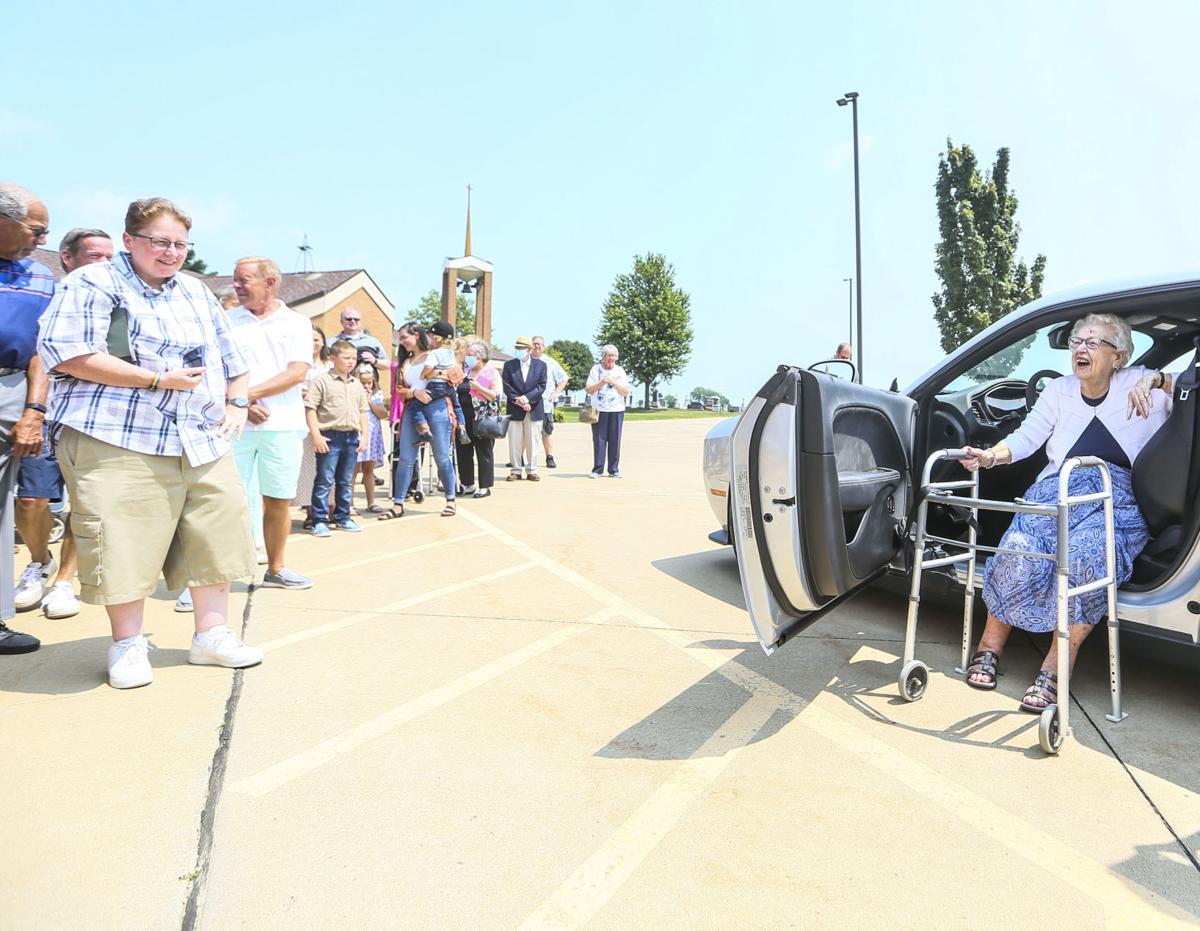 Jane Cronkleton, a World War II Navy veteran, drives up to the entrance to St. Ann's Catholic Church in a sports car to a crowd of family and friends to celebrate her 100th birthday Saturday in Long Grove. 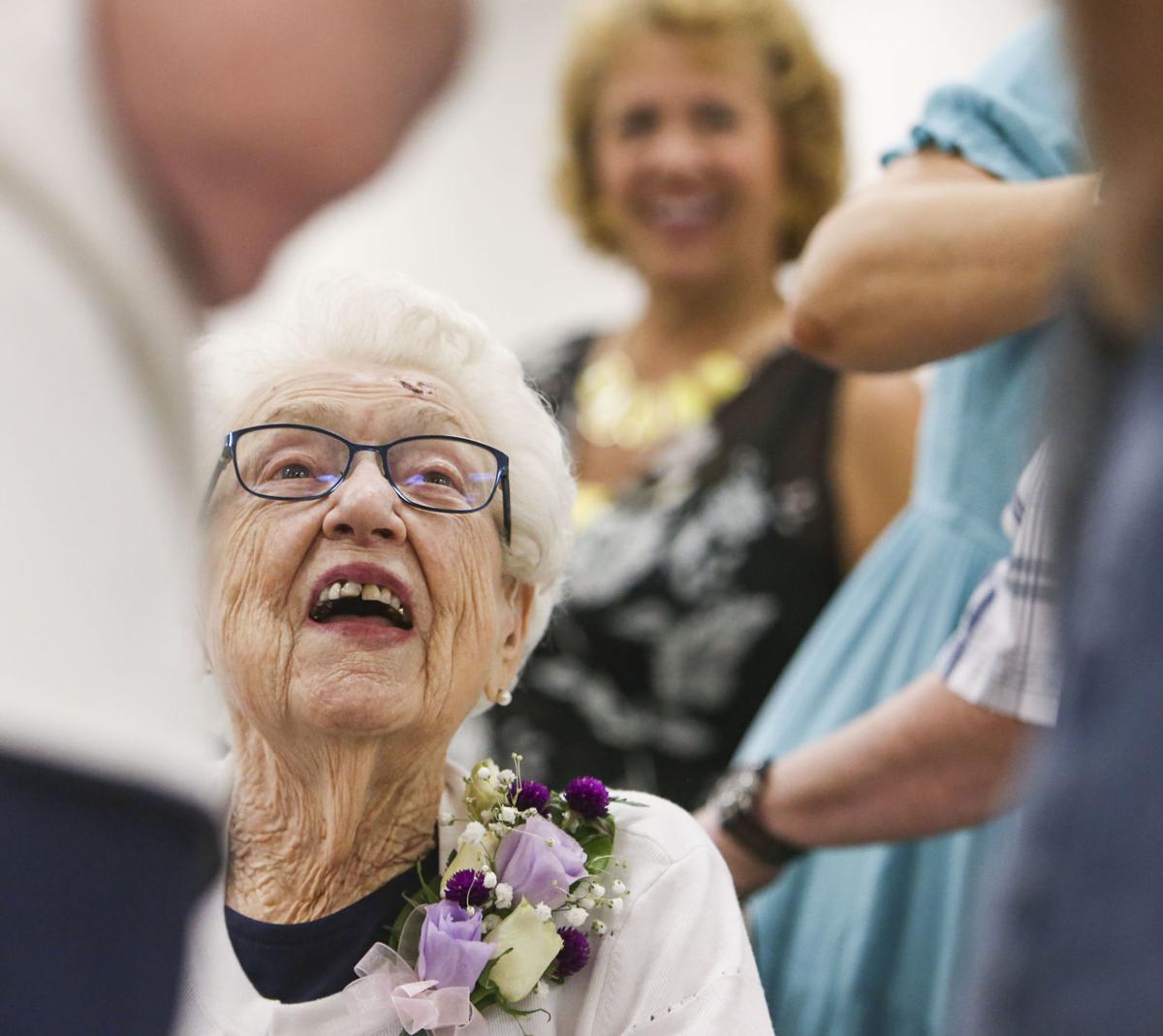 Jane Cronkleton celebrates her birthday with family and friends Saturday in Long Grove.

Jane Cronkleton sat in the den of her Davenport home Friday, relaxed and happy to still be mostly independent a day before her 100th birthday.

“She orders her groceries on an iPAD,” her nephew Tom Simmons said. “She goes on Facebook on an iPhone8.”

Her family and friends threw a party for her at St. Ann’s Catholic Church in Long Grove, complete with a Mass performed by her nephew the Rev. Tom Cronkleton of Wyoming.

Cronkleton was born July 31, 1921. She graduated from Immaculate Conception Academy in Davenport 1939. Her father was a rural milk carrier and made his deliveries in a horse and buggy.

“My mother had the car," Cronkleton said. "My mother was a rural school teacher. We can thank her because she taught us all of our Mother Goose rhymes before we were out of diapers, practically.”

“I was talked into it by a friend,” she said. “We went and signed up. I passed the physical, and she had to go back home and gain weight.

“Join the Navy and see the world,” she said with a laugh. “I served in the Navy for three years and was never on a ship.”

But women served so that men could be released from desk duty for war duty.

Cronketon explained that her job during the war was in Washington, D.C., and she worked on an IBM machine that broke down secret codes.

“What I did working, it wasn’t hard work, but it was the beginning of technology because we were working on IBM machines, and look where we are today,” she said.

Cronkleton said she won the war sunning on the Potomac River in a canoe.

“We’d get off at 7 p.m., and we didn’t feel like going to sleep," she said. "So, we’d go to Georgetown and rent a canoe. There was a great big rock out on the Potomac that we’d go to and where we could sit in the sun.

“I really appreciated my time in the service because it took an Iowa girl out of the cornfields and opened her eyes to the world,” Cronkleton said.

While living in D.C., she traveled the East Coast. Her first musical she saw in New York was Rodgers and Hammerstein’s “Oklahoma.”

She said she took her first airplane ride after the war.

“I worked at Moline Public for a while, and I went down to Kansas City for a conference. I got on a plane (in Moline) that I thought it was a bucket of bolts, and we flew to Cedar Rapids and then to Kansas City,” she explained.

Cronkleton said she didn’t see the world when she was in the Navy, “but I made up for it afterward.”

She’s been to Europe five times. “I loved Ireland, Scotland, and the British Isles.” The family is of Scottish stock.

Her first trip to Europe was to Italy.

Cronkleton retired from the University of Michigan as a laboratory supervisor of the student health department. Back in the day, she said, women could be nurses or teachers.

She moved back to Davenport in 1964 or 1965 after her retirement to care for her aging mother. “The minute I walked in the door I was the mother and she was the daughter.

Cronkleton was asked to join a book club that had been started by some of her high school classmates before the war.

“We went through the Depression and the Second World War, and they would meet every two weeks,” Cronkleton said. They kept that up for years, and when they asked her to join after returning to Davenport, she said she jumped at the chance. “It saved me.”

“The pandemic really cut us down,” she said. “When I came there were 12. Today there are two. I have a classmate, and she’ll be 100 years later in the year. We’ve got two daughters, a niece and a dear friend, so we have six, and we’re trying to get back together.”

As a former member of the staff of the University of Michigan, Cronkleton remains a huge Wolverine football and basketball fan.

“Oh, boy!” she exclaimed as the subject of football arose. “We had season tickets. And of course, with (Bo) Schembechler and Woody Hayes, it was all about winning.”

Cronkleton said she remained a voracious reader, a lover and writer of poetry, and a lifelong learner.

“Every day is about learning,” she said. Cleaning out some things recently, Cronkleton said she ran across a poem that she memorized.

“Happiness makes you pretty; trials make you strong; sorrows make you human; failures make you humble; success has you growing; but only God keeps you going,” she said.

She wishes she would have had her knees replaced when she was a few years younger. “I would be traveling coast-to-coast.”

Neighbors help with the yard work, and they check on her regularly, and of course, Simmons and the rest of the family are there to help when she needs it. But she still cooks her own meals, reads voraciously and enjoys as much freedom in her own home as the pandemic has allowed.

“These days, I live by family, faith and friends,” she said.

Watch now: Firefighters work on fire at Rudy’s on Elmore Avenue in Davenport

Watch now: Murder rates spiked in 2020 across the United States

Watch now: Murder rates spiked in 2020 across the United States

A man died inside a house fire in Buffalo Friday.

Jane Cronkleton as a member of the Navy during World War II.

Jane Cronkleton, a World War II Navy veteran, drives up to the entrance to St. Ann's Catholic Church in a sports car to a crowd of family and friends to celebrate her 100th birthday Saturday in Long Grove.

Jane Cronkleton celebrates her birthday with family and friends Saturday in Long Grove.