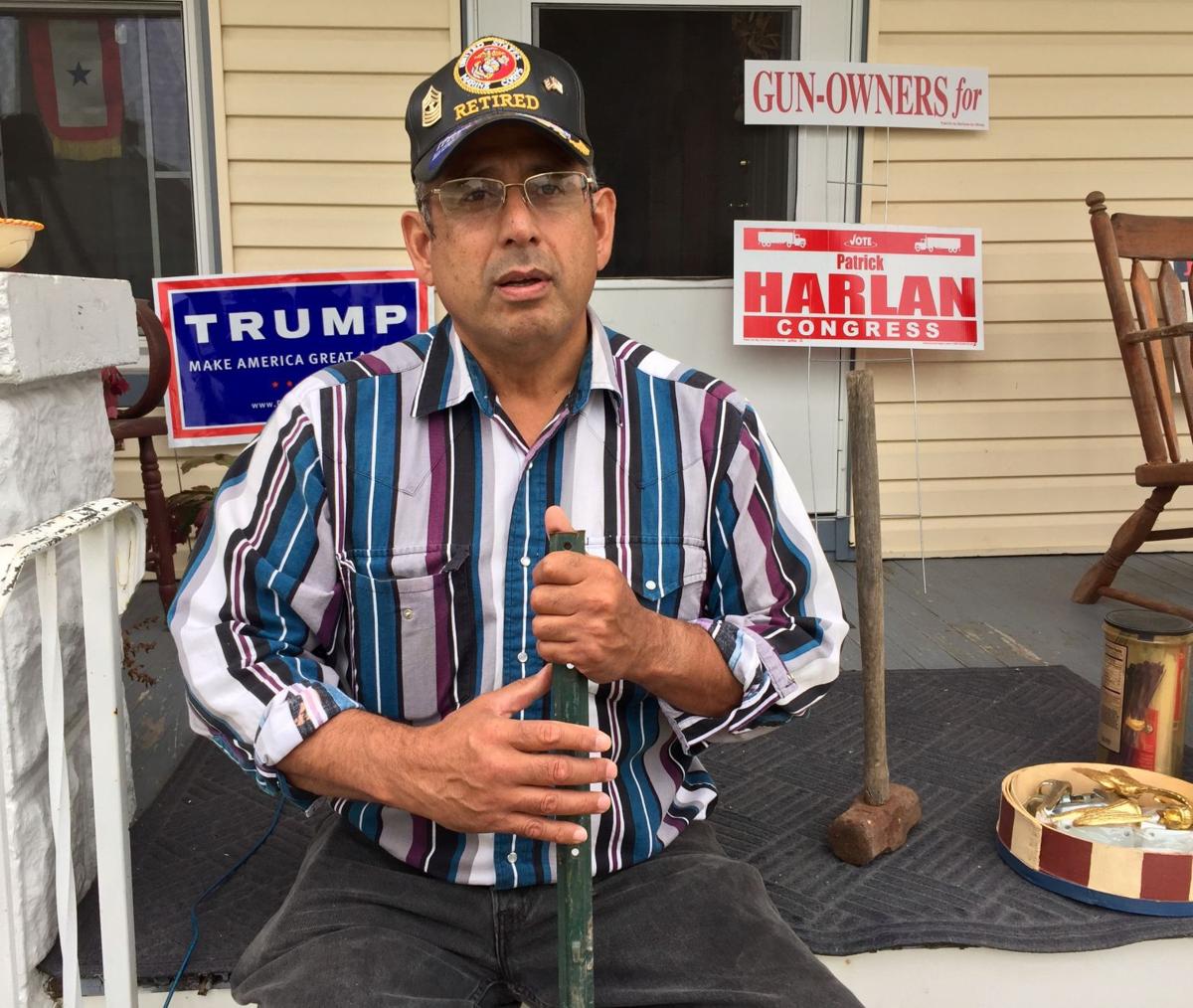 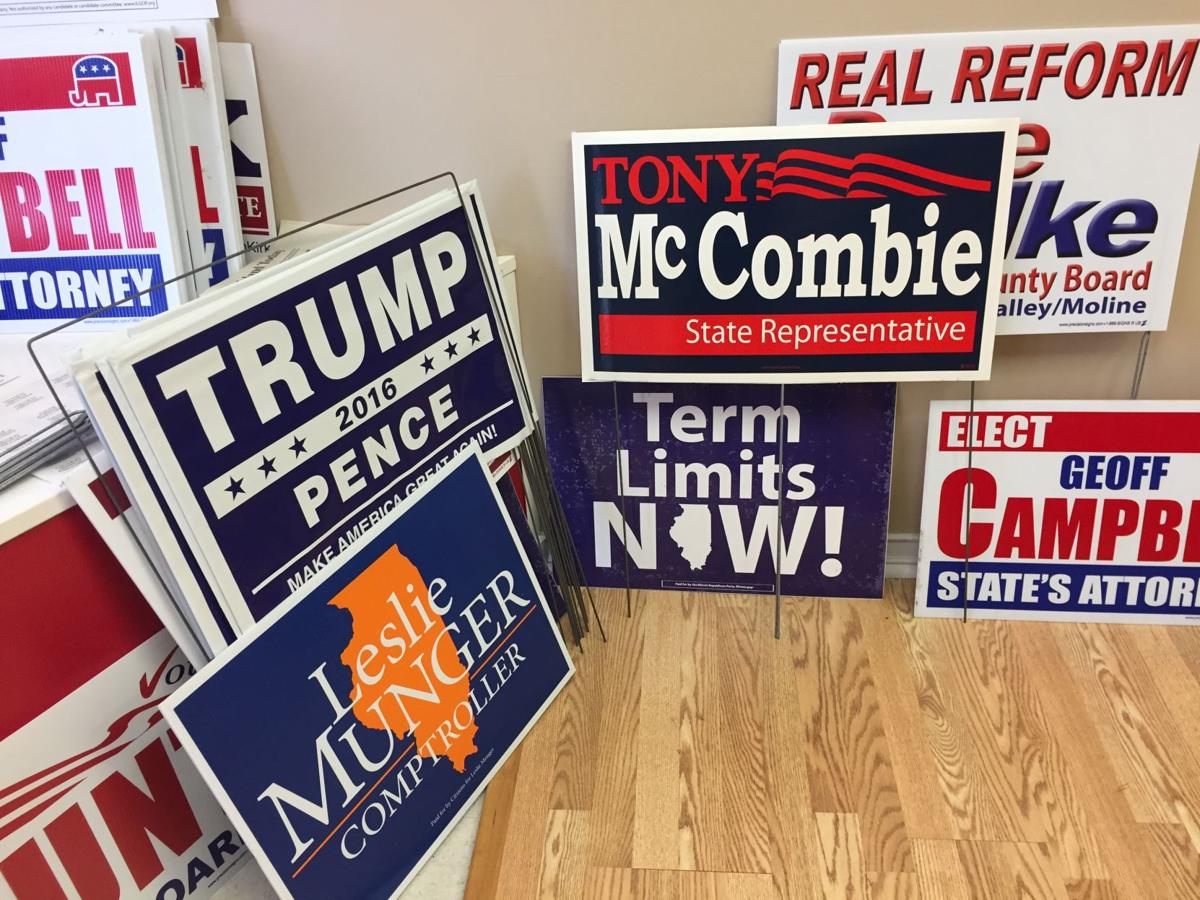 A collection of political yard signs at the Rock Island County Republican Party's office in Moline. William Bloom, chairman of the party, said his office already has replaced dozens of stolen signs this fall.

The floorboards on his front porch are starting to chip and crack, but Francisco "Keko" Martinez is proud of his property on 17th Avenue in Moline.

While a recent stretch of unemployment set the U.S. Marine Corps veteran back a bit, he's working again now and plans to refurbish the rickety decking once he catches up on his bills.

The married father of three, who has lived in the house since 2000, said his property hadn't been vandalized until last month when he posted a sign in his yard to show support for Republican presidential nominee Donald Trump.

A few weeks back, the sign disappeared. Then, last week, vandals stripped another political sign from his yard in addition to an American flag, which formerly flew from a makeshift pole Martinez built from a broom handle.

Following the incident, Martinez filed a report on Sept. 25 with the Moline Police Department.

"I went to war for people's right to voice their opinion," Martinez, 58, said through tears. "If they want to pray to Yahweh or Allah, they have a right to do that. All I did was put stinking signs out."

After reading his story Tuesday at qctimes.com, Crystal Yost of Geneseo contacted the Times to see if she could replace his flag.

The married mother of three, who “absolutely will not” vote for Trump on Nov. 8, said she felt bad for Martinez.

“What happened to this guy wasn’t right,” she said over the phone. “He’s a veteran, and he’s sacrificed a lot for our right to vote and our right to put up yard signs for and against politicians.

“We’re on different sides, but maybe this is a good opportunity to bridge some gaps between groups.”

Martinez’s military career stretched almost 26 years and included periods on active and Reserves duty. In 1991, he volunteered to serve in Saudi Arabia during Desert Storm.

Some may recall his commitment to the Toys for Tots campaign in the Quad-Cities during his time with the Marine Reserves.

"We're really glad to have him (Martinez) on our team," said William Bloom, chairman of the Rock Island County Republican Party.

Bloom said his office already has replaced dozens of stolen Trump signs, including Martinez's, this year throughout Rock Island County.

“We’re replacing signs about as soon as they settle into the ground,” Bloom said. “I get that some people aren’t very fond of the gentleman (Trump), but people still have the right to express who they’re for in an election.”

Martinez, who wants to see someone "new" and "different" in the White House, gifted a Trump sign to one of his neighbors on Monday.

“I’m pro-Trump because I’m anti-Hillary,” said Martinez, whose grandfather emigrated from Mexico. “He is what she isn’t.”

On Monday, he secured a new and larger Trump sign, which bears the phrase, "Make America Great Again," to his porch railing with zip ties.

"I really shouldn't have to do this," he said. “I’ve got a lot of better things to do than babysit my yard.”

Editor's note: Look for reporter Jack Cullen's Notes @ Noon Tuesday, Thursday and Friday online at noon. He captures various sides of life in the Quad-Cities. Contact him at jcullen@qctimes.com or 563-383-2363.

Jack Cullen's Notes: Q-C people doing what they do

A collection of political yard signs at the Rock Island County Republican Party's office in Moline. William Bloom, chairman of the party, said his office already has replaced dozens of stolen signs this fall.