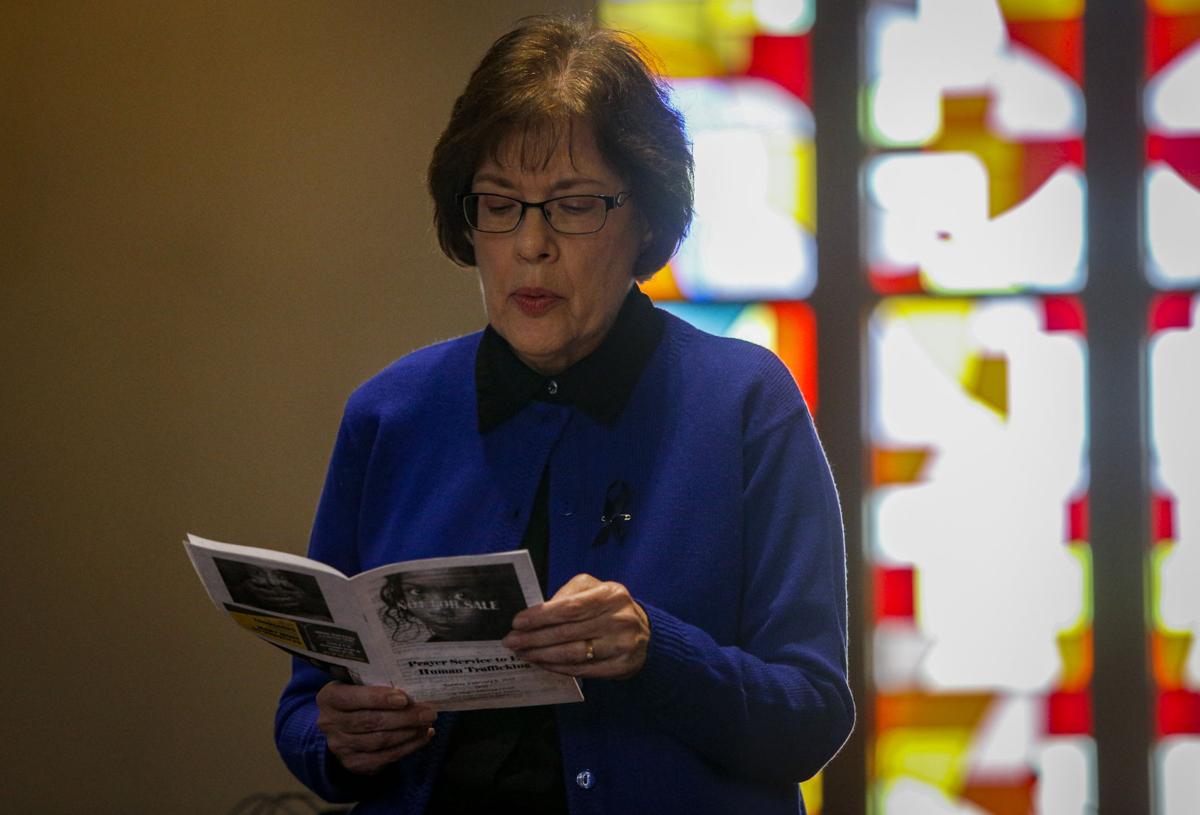 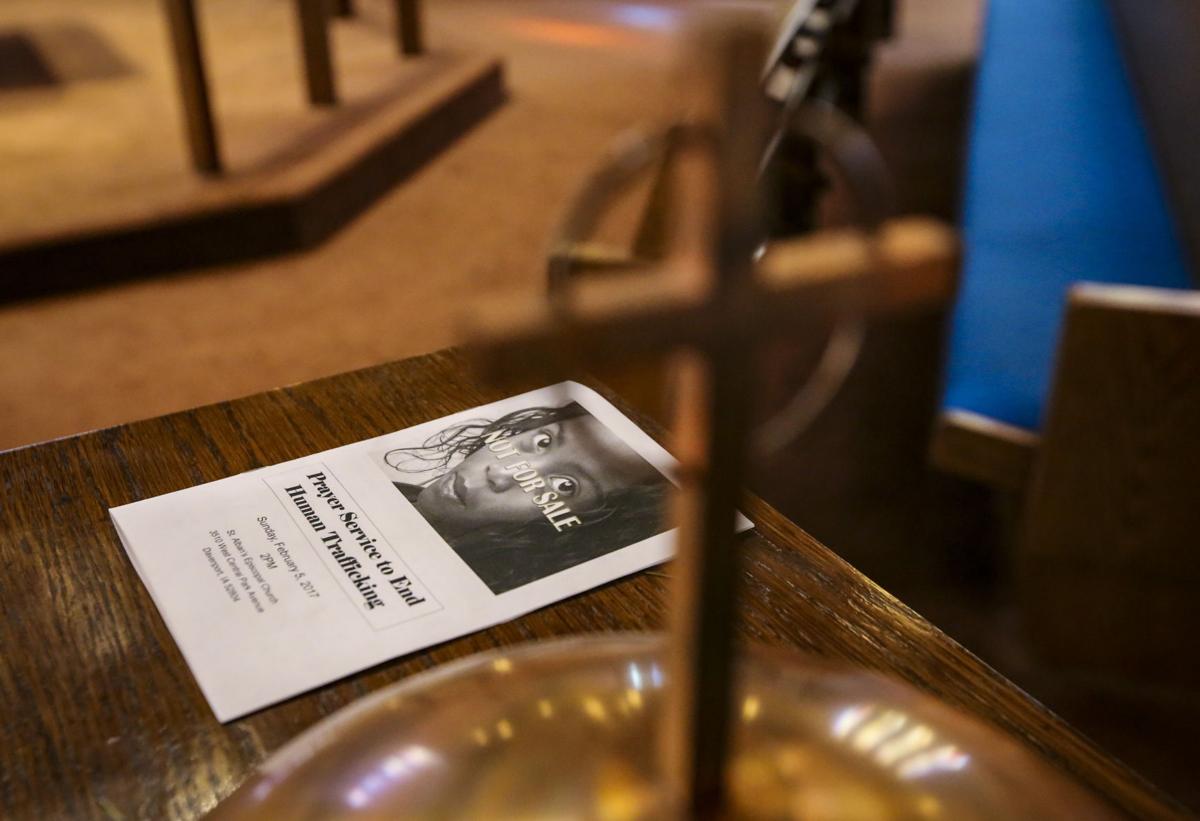 A program is placed near a cross Sunday at St. Alban's Episcopal Church, Davenport, where the faith-based group Attacking Trafficking held a prayer service in support of human trafficking victims. 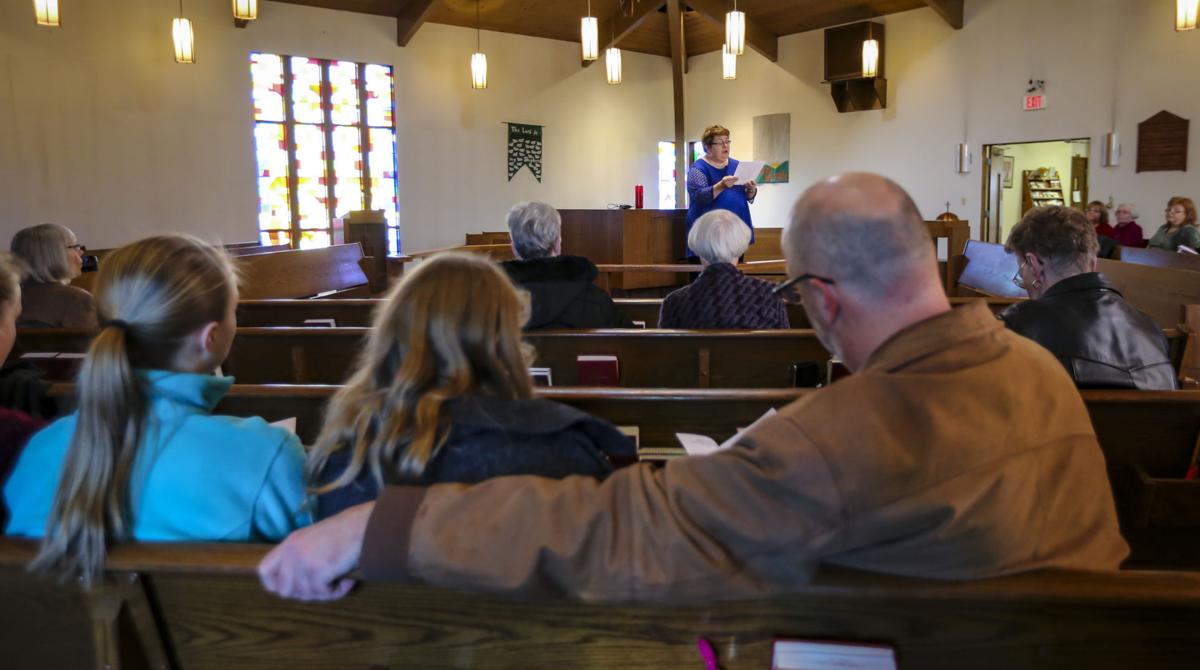 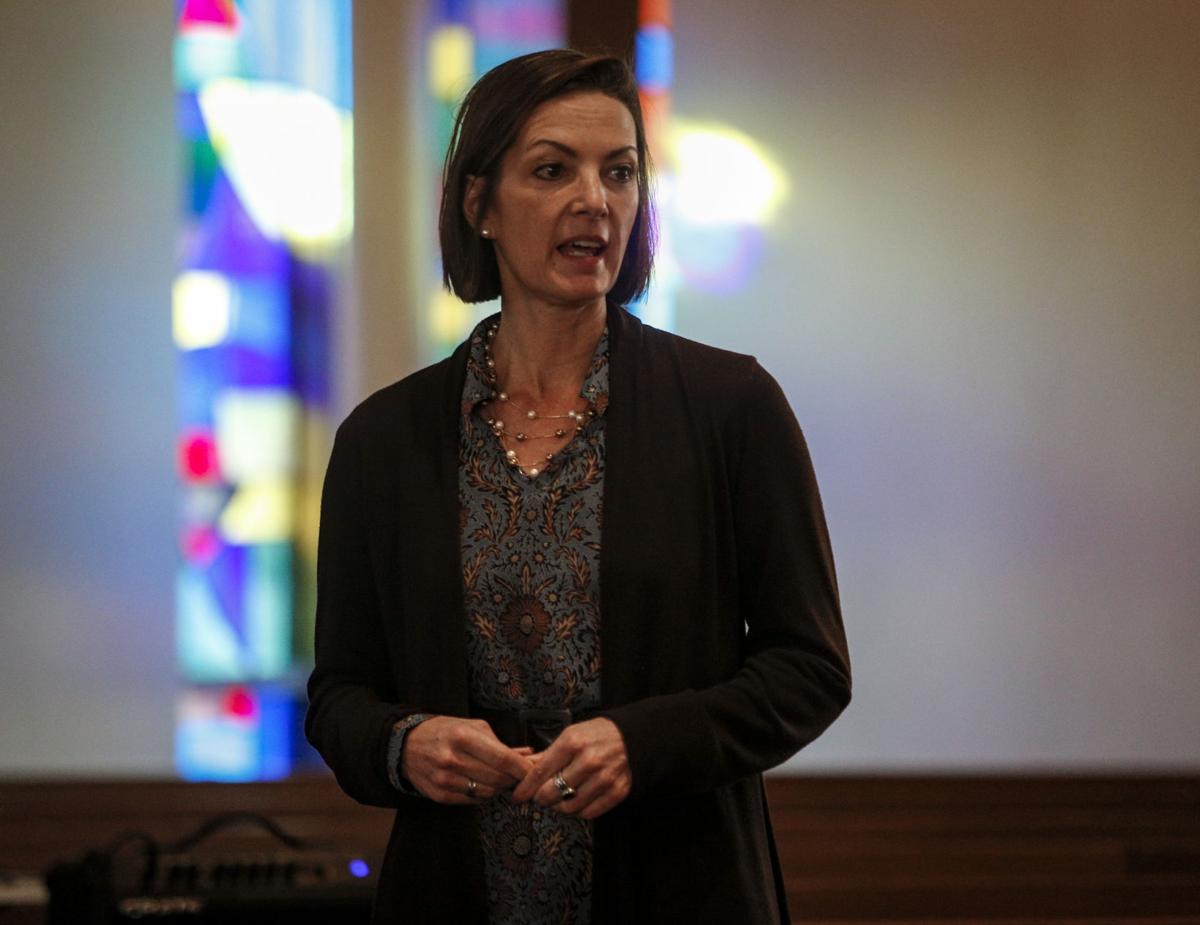 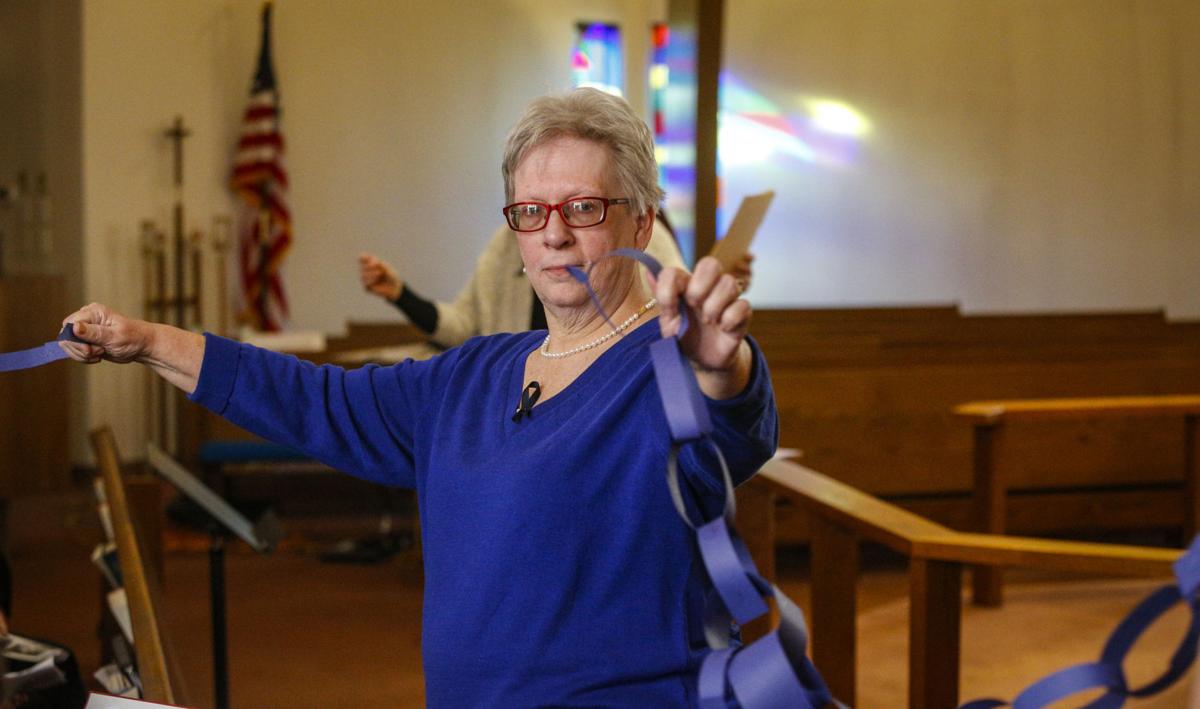 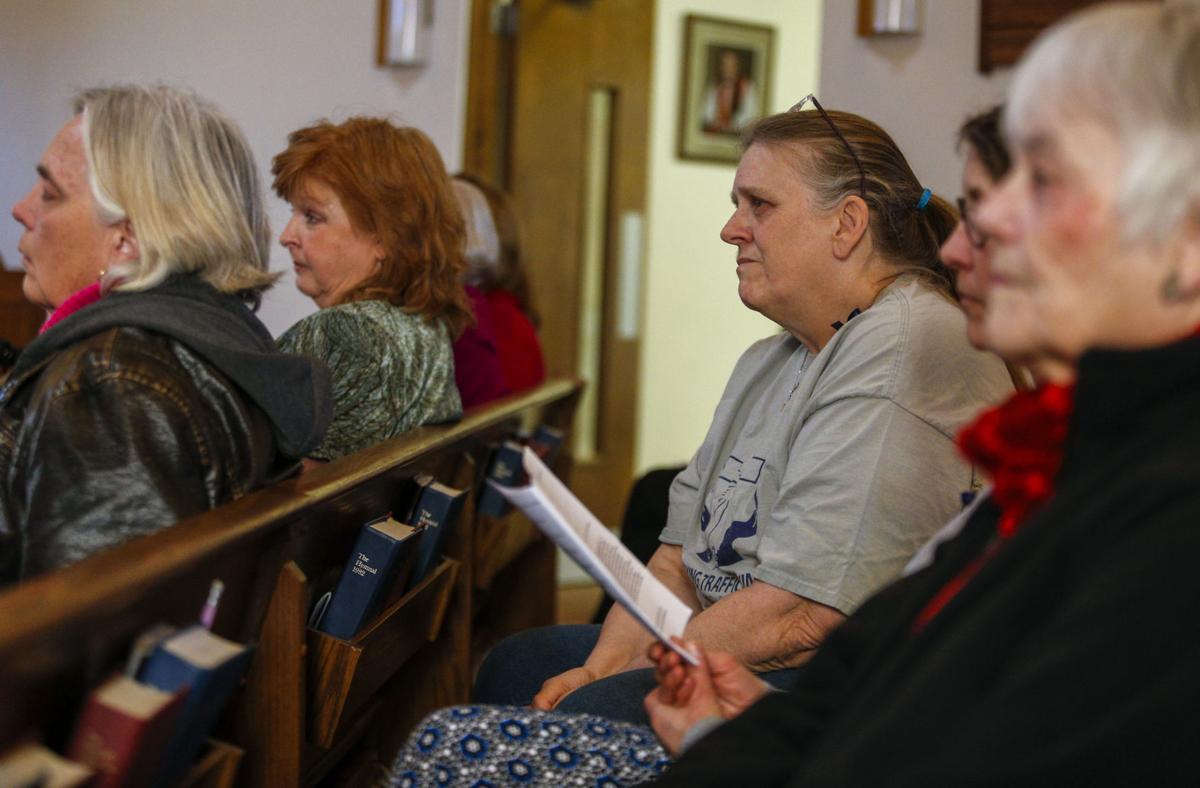 Sue McCo, a member of St. Alban's Episcopal Church, sits among other guests Sunday to listen to a presentation on human trafficking in Davenport. 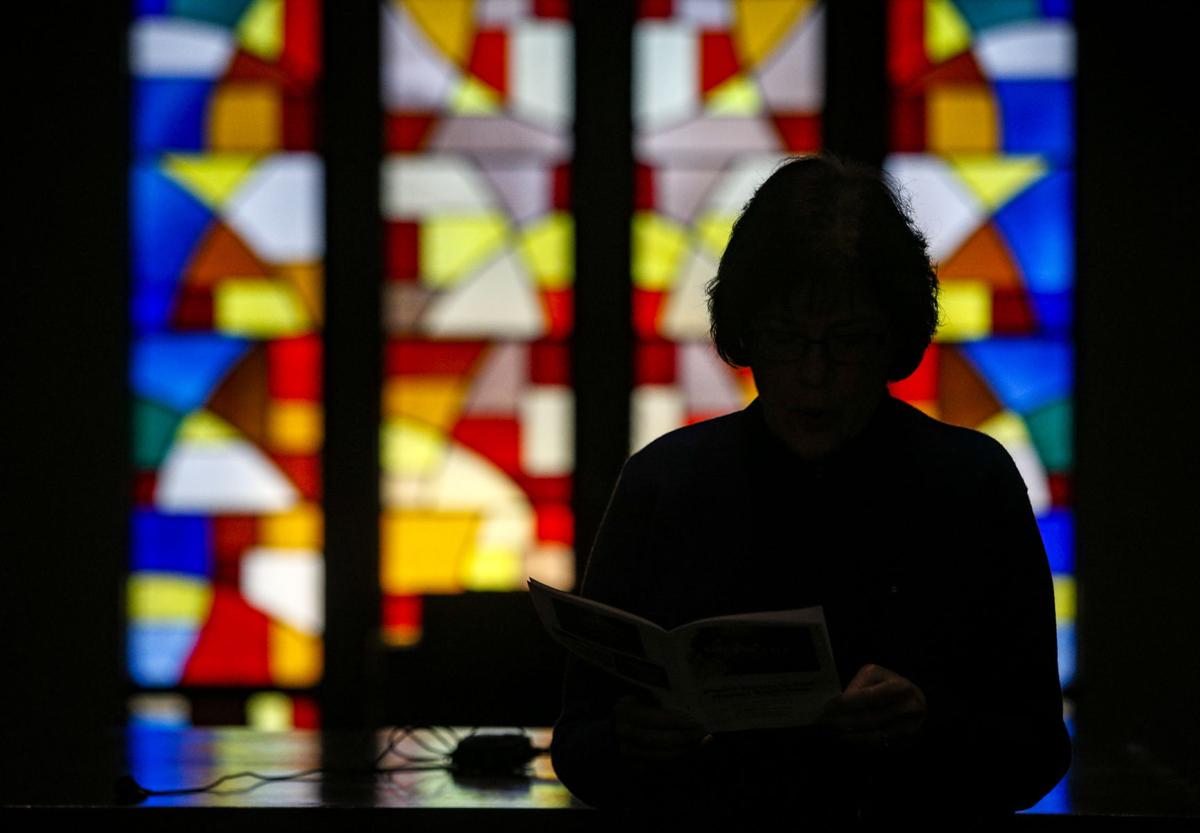 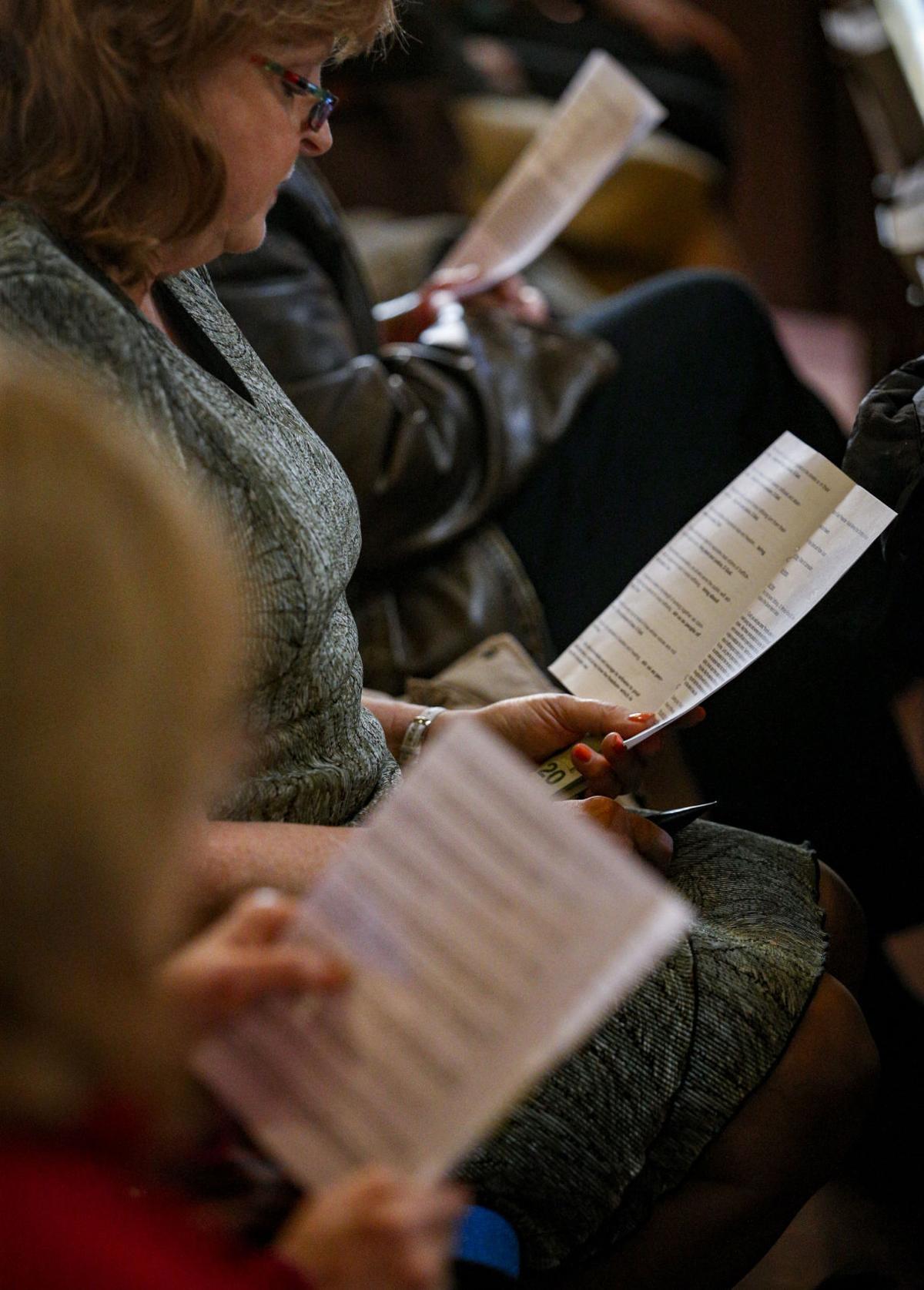 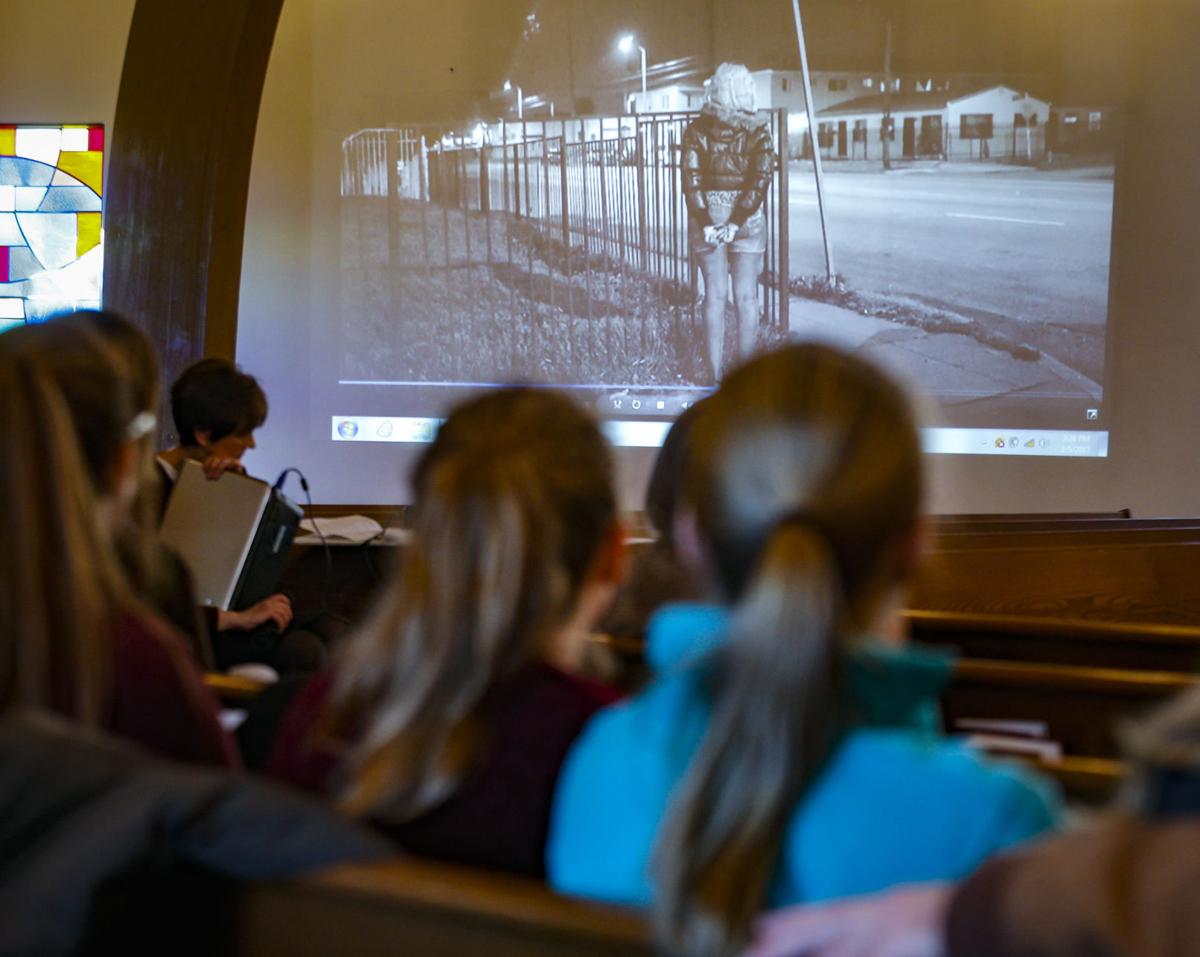 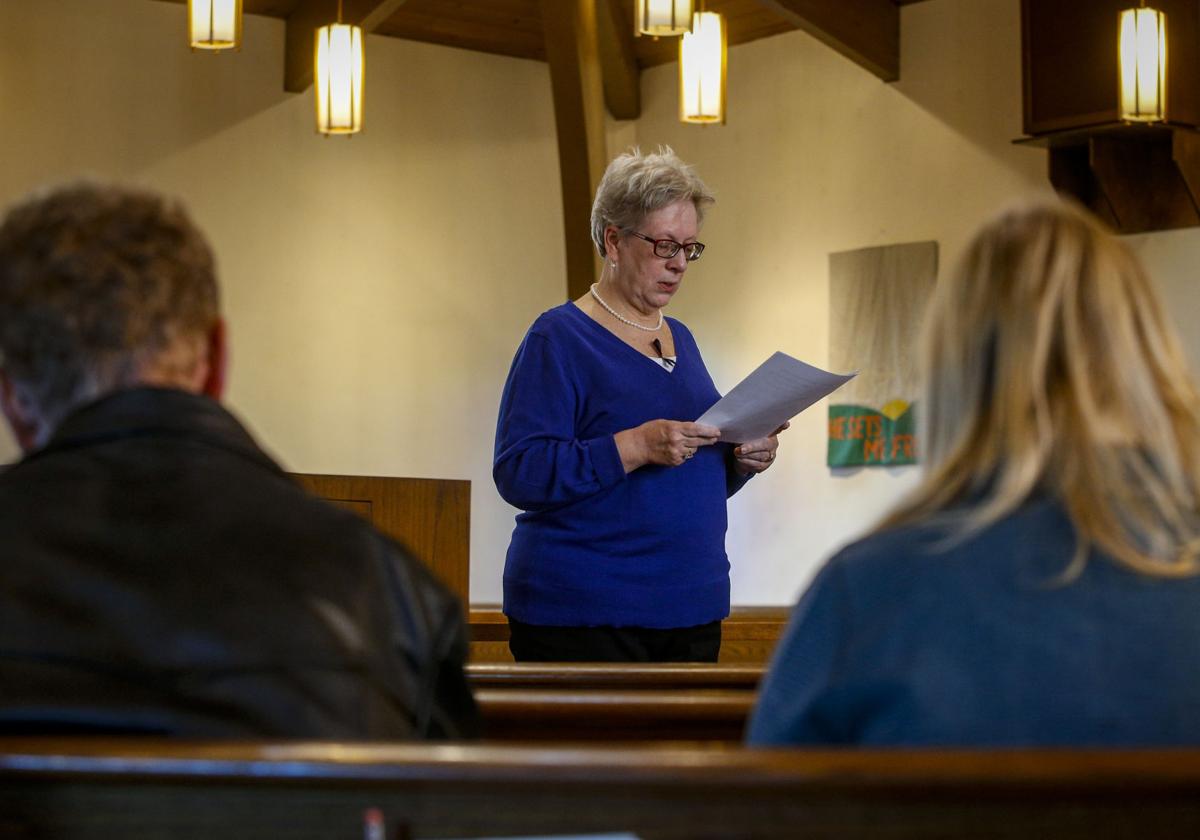 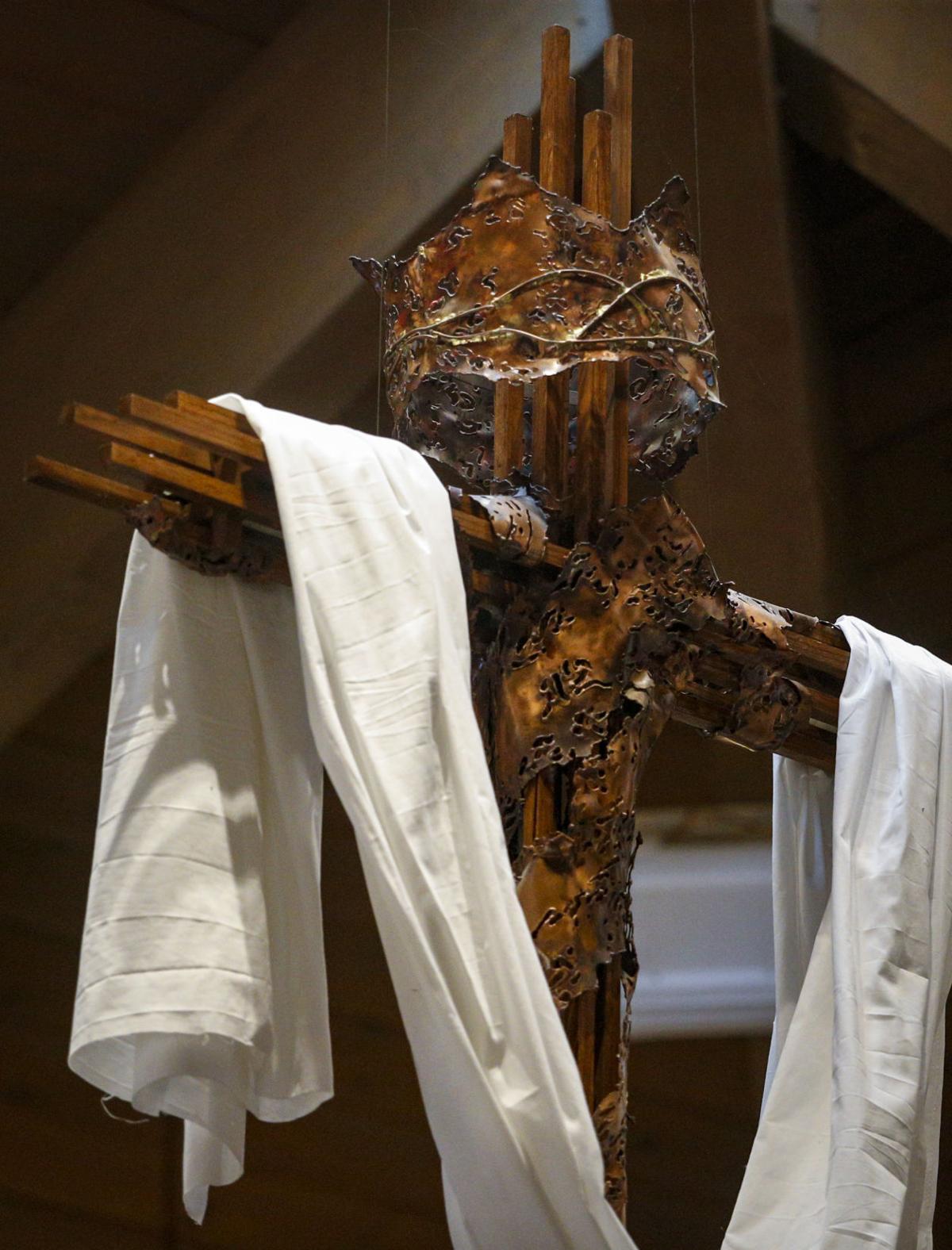 A cross hangs from the center of the ceiling Sunday at St. Alban's Episcopal Church, Davenport, where faith-based group Attacking Trafficking held a prayer service to end human trafficking. 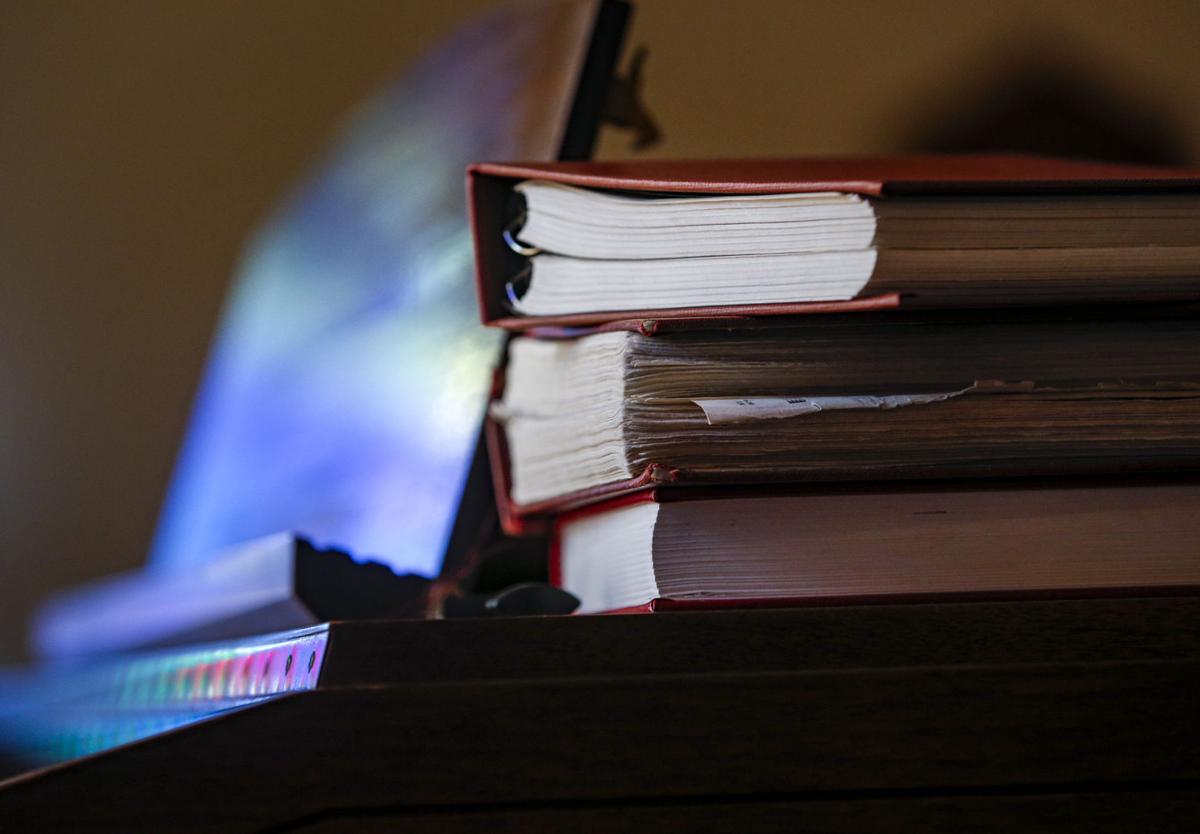 Iowa is among the top five states in which human trafficking occurs.

That was part of a sobering message Sunday afternoon during a prayer service to end human trafficking at St. Alban’s Episcopal Church, Davenport. The 35 people who attended the service sang, prayed and discussed the issue of human trafficking, particularly in Iowa.

The service was supported by the Catholic Diocese of Davenport, the Episcopal Diocese of Iowa, the Evangelical Lutheran Church of America and the Presbyterian Church.

Cathy Curtis, of Attacking Trafficking, talked about the faith-based organization in Davenport dedicated to ending human trafficking and offering hope and healing to survivors.

Volunteers in the group educate the community about the “evils of human trafficking,” she said.

The timing of the event had a double significance to human trafficking: The Super Bowl is a “big day for human traffickers to bring victims into the area and to obtain new victims, she said. And Feb. 8 is the Feast Day of St. Josephine Bakhita, a Sudanese slave who became a nun and is the saint of slaves and trafficked persons.

Human trafficking statistics are “horrifying,” Curtis said. “There are an estimated 21 million victims of trafficking worldwide,” she said – and that includes the United States.

“It’s slavery. And it’s against human dignity,” she said, adding migrants and refugees are particularly vulnerable.

The Rev. Sharon Larrison of Newcomb Presbyterian led a litany in support of trafficking victims: “God of truth and freedom, we come into your presence and ask you to hear us as we pray,” she said, offering prayers for child laborers, child soldiers, children exploited in pornography, for children abused or denigrated on the streets or in their homes and all people enslaved, trafficked and abandoned.

She said Iowa "is one of the top five (states) in the nation" when it comes to trafficking partly because of Interstates 80 and 235, primary thoroughfares for all major trafficking.

“The people who sell children for sex are very sophisticated,” Markey said. She said that some victims become involved through a “traditional pimp environment,” some as part of the business of drug dealers or gangs, and others through their families or people close to their families.

Markey founded Dorothy’s House, which is designed to provide a holistic approach to helping victims of severe sexual abuse/assault and sex trafficking achieve a healthy, happy and productive life in the communities that have supported their recovery.

A program is placed near a cross Sunday at St. Alban's Episcopal Church, Davenport, where the faith-based group Attacking Trafficking held a prayer service in support of human trafficking victims.

Sue McCo, a member of St. Alban's Episcopal Church, sits among other guests Sunday to listen to a presentation on human trafficking in Davenport.

A cross hangs from the center of the ceiling Sunday at St. Alban's Episcopal Church, Davenport, where faith-based group Attacking Trafficking held a prayer service to end human trafficking.