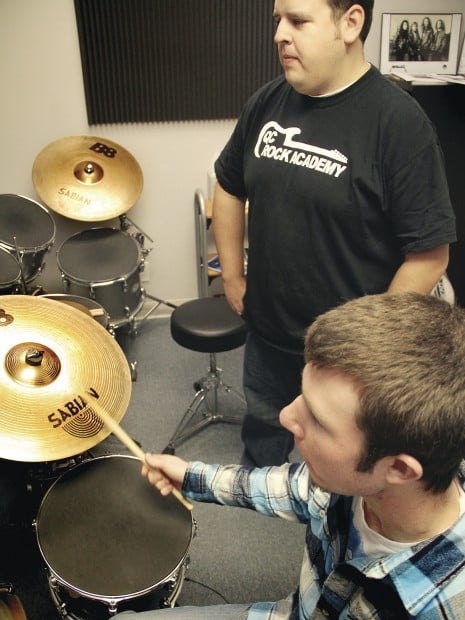 QC Rock Academy owner Greg Hipskind, right, works with student John McAfoos of Davenport during a drumming lesson. McAfoos, 19, has been taking lessons for six years from Hipskind, who plays professionally in a pair of Quad-City bands. (Photo by Kevin E. Schmidt/QUAD-CITY TIMES) 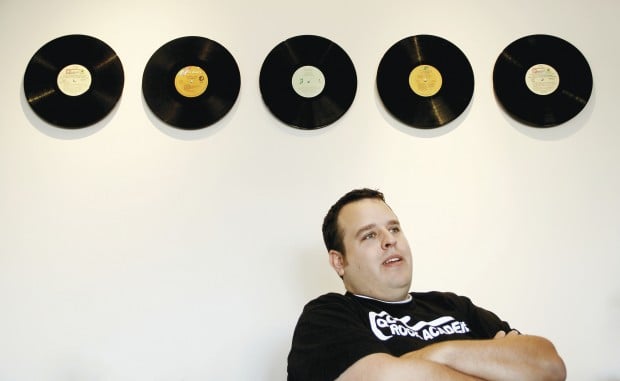 While some music conservatories might feature busts of Bach, Beethoven or Brahms, the QC Rock Academy has posters of Jimi Hendrix, Metallica and AC/DC.

It features instruction in guitar, bass, drums, piano and vocals, all with rock inspiration.

“We’re not doing any of the clarinet, flute. The other stores can have that,” said owner Greg Hipskind of Moline, a drummer for both Wicked Liz & the Bellyswirls and Superfly Samurai.

Hipskind taught drums for about six years at West Music in Davenport and the Quad-Cities Music Education Coalition, both of which have closed. (West Music still offers instrument sales, rentals and lessons in the Quad-Cities at its expanded store at 4305 44th Ave., Moline.)

When the latter closed in midsummer, he was spurred to pursue the dormant idea of a rock school.

“It all materialized rather quickly, from the end of July to our open house on Dec. 3,” he recalled. “Four months I went from not knowing what I wanted to do to becoming a business owner.

“It’s been a whirlwind,” he added.

He originally wanted to have a School of Rock location — based on the hit Jack Black comedy movie of that name — in the Quad-Cities, but the franchise fees were $250,000.

“I’ll take the ideas they have, what they do and make it my own,” he said.

“Everybody knows where Chuck E. Cheese is,” he said of the pizza restaurant, and his place is just down the block.

He is one of the teachers at the academy. Guitarists Billy Gardner, Chris Avey and Tony Vogel are all instructors, as is Melinda Menner on piano. A vocal teacher, a Quad-City native moving back home from San Francisco, has expressed tentative interest in teaching lessons in singing and will confirm her decision this week.

So far, Hipskind has about 20 students for the drums alone, he said.

Extra guitar teachers were added to meet demand, he said, with the anticipation that many more students will enroll after getting the instrument as a Christmas gift.

“In the last two weeks, I’ve gotten about 20 calls, and most of them were for guitar lessons,” he said recently.

The cost is generally $80 per month for four weekly half-hour lessons.

Instructors will teach students of all ages and all skill levels, Hipskind said. The youngest so far is 5 years old and the oldest is 67, a brand-new player who Hipskind taught to play the drums.

“I strongly believe that I can teach anyone a straight rock beat in about 15 to 20 minutes,” he said.

He’s anticipating jam nights on Saturdays in the near future, as well as placing players together to form at least impromptu bands.

Hipskind, 35, has been with Wicked Liz & the Bellyswirls for almost 13 years. He and two fellow Bellyswirls, Leo Kelly and Bob Kelly, formed Superfly Samurai six years ago after lead singer “Wicked Liz” Treiber gave birth to her first child.

Speaking of births, Hipskind and his wife, Jenny, a WQAD-TV news producer he’s been married to for 3 1/2 years, are expecting their first child, a daughter, in early April.

John McAfoos of Davenport, a 19-year-old drummer, has been taking lessons from Hipskind for six years and enjoys both the location and the mission of the QC Rock Academy.

“It’s very welcoming and the people here are really nice, and the fact that I’ve known Greg for so long and I’m comfortable here,” he said.

QCT Bix 7 After Party: Everybody was having a good time

More information is available at QCRockAcademy.com or by contacting Greg Hipskind at 563-386-3044.

QC Rock Academy owner Greg Hipskind, right, works with student John McAfoos of Davenport during a drumming lesson. McAfoos, 19, has been taking lessons for six years from Hipskind, who plays professionally in a pair of Quad-City bands. (Photo by Kevin E. Schmidt/QUAD-CITY TIMES)