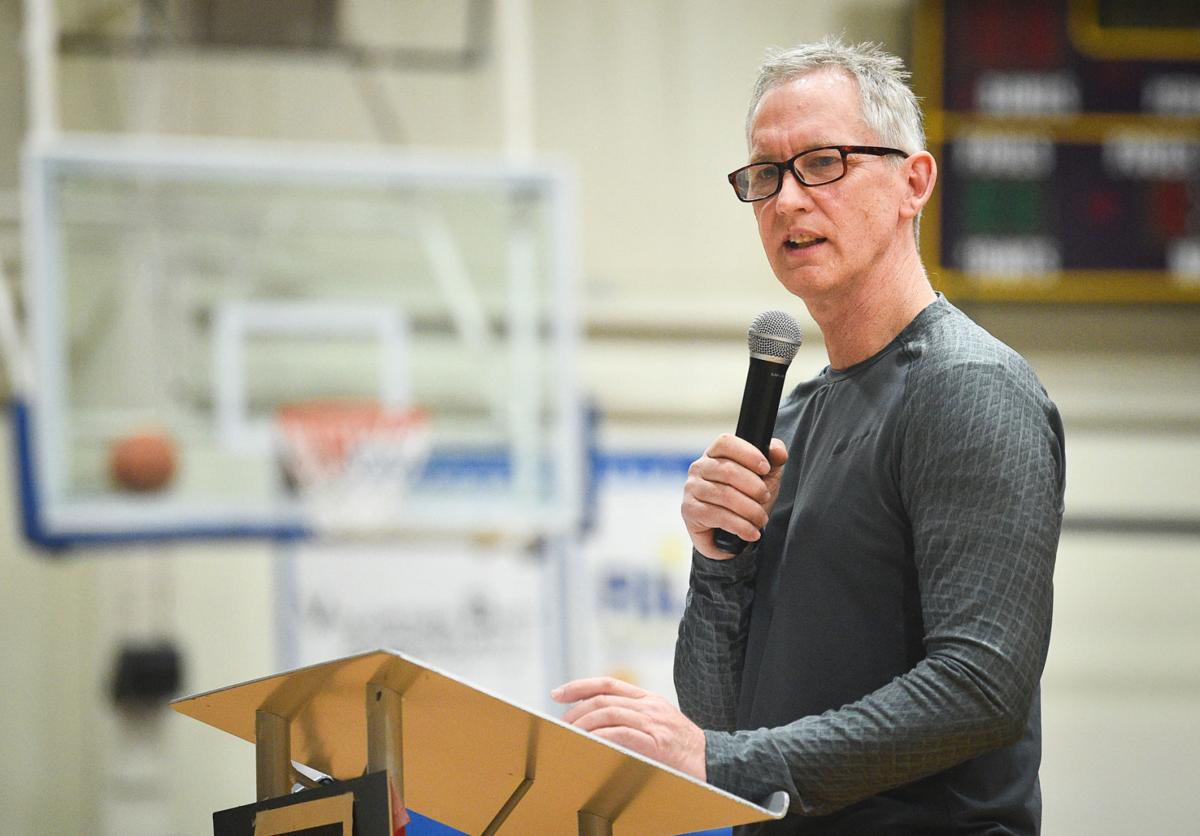 Gary Thrapp, owner of Beyond the Baseline in Davenport, speaks to a group during a Martin Luther King Jr. Day ceremony on Monday. Thrapp is the Quad-Citizen Award winner for January. The award is a partnership between Quad-City Times and IH Mississippi Valley Credit Union.

A Martin Luther King Day celebration was held Monday, Jan. 20, inside the arena of the now-defunct Marycrest College.

There were speeches and basketball games and messages of hope for the kids who regularly play in the place Gary Thrapp named Beyond the Baseline. He and his wife, Annette, bought the hulking hump on West 12th Street roughly 13 years ago.

Before all the festivities, the maple hardwood hosted the thud-ring of bounced basketballs and the unmistakable rubber-soled squeak of impromptu, pick-up hoops. The games were the kind of referee-free contests played by kids who feel safe in their surroundings.

Thrapp wore a grin, too. But it wasn't because he learned he had been named Quad-Citizen for the month of January.

The Quad-Citizen Award is a partnership between the Quad-City Times and IH Mississippi Valley Credit Union to honor outstanding Quad-City area residents who go above and beyond for their community.

"Awards aren't why I do this. It isn't what keeps this place going or was ever a goal when we started all this," Thrapp said. "Really, Beyond the Baseline started because I was looking for a place I could take my own kids.

Beyond the Baseline is a for-profit venture. Teams pay fees to play in tournaments. The profits go to the maintenance of the arena and the Quad-Cities Sports Foundation. Thrapp also is one of the driving forces behind the IHMVCU Shootout, the Quad-Cities Youth Summits, and the Hoopin' for Change tournaments.

The goal is to offer kids what Thrapp calls "stability and safety."

Lonnie Ray, 51, is a Davenport native who coaches eight locally based basketball teams. He likes to talk to Thrapp.

"Gary tries to help as many kids as possible," Ray said. "Look around here. Most of these kids — almost all of them — are African-American. Look at Gary. He is not even close.

"But he lets kids in and keeps them safe and says 'Go play.' That's pretty awesome. He understands kids need opportunities and some understanding."

Thrapp said he hears from kids "with serious struggles."

"I want to help kids see a future," he said. "I want them to see beyond the moment, beyond Snapchap and to their own futures. Some kids don't have a single adult in their lives they can trust. Annette and I wanted to make a place where the kids could trust the adults.

"I want them to know they have this place here. It will be there for them."

Photos: Gary Thrapp, Quad-Citizen for the month of January

The Quad-Citizen Award is a partnership between the Quad-City Times and IHMVCU to honor outstanding Quad-City area residents who go above and beyond for their community.

"When someone decides to help, it's not because of the notoriety, it's because that individual truly wants to make a difference," said Brian Laufenberg, IHMVCU president and CEO. "That's the true spirit of the Quad-Citizen Award – acknowledging the everyday things people do to make the Quad Cities special."

Quad-City Times Publisher Debbie Anselm added "We, along with IHMVCU, are inspired by good deeds we witness across the region. This is a unique opportunity to thank Quad-Citizens for what they have done and will continue to do."

One honoree a month is chosen from a pool of nominees. Honorees receive $250 from IHMVCU. To nominate, go to www.qctimes.com/contests.

NASA and SpaceX count down to Halloween launch

NASA and SpaceX count down to Halloween launch

With a 5K road race and donations to worthy causes, Spurthi the Inspire president Jayashree Karnam helps inspire wellbeing in the community.

Beyond the Baseline owner Gary Thrapp is diving into writing with a series of help books and children's stories.

Gary Thrapp, owner of Beyond the Baseline in Davenport, speaks to a group during a Martin Luther King Jr. Day ceremony on Monday. Thrapp is the Quad-Citizen Award winner for January. The award is a partnership between Quad-City Times and IH Mississippi Valley Credit Union. 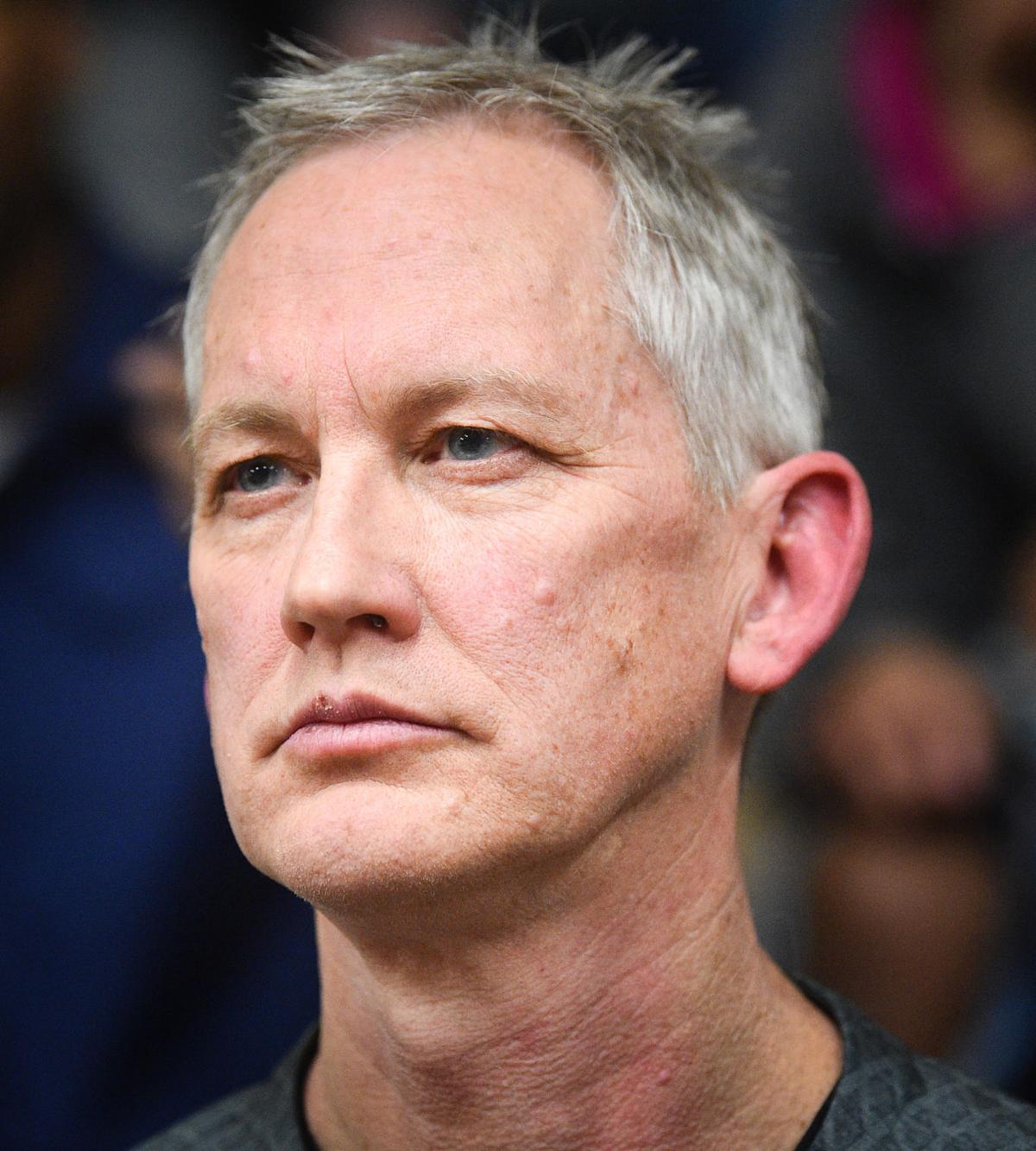