REPORT: Davenport falls behind other Iowa cities on LGBT equality
Share this
{{featured_button_text}}

Davenport lags behind other Iowa cities in LGBT equality, according to a recent report from the Human Rights Campaign.

For the second-straight year Davenport scored 80 out of 100 points on the HRC’s annual “municipal equality index scorecard.” That's a regression from 2017, when Davenport received a perfect score.

The scorecard has five parts: non-discrimination laws, the municipality as employer, municipal services, law enforcement and leadership on LGBTQ equality.

Davenport scored perfectly on non-discrimination laws, thanks to rules banning discrimination on the basis of sexual orientation and gender identity.

But Davenport received 0 out of 12 available points for its failure to report hate crime statistics to the FBI.

“Due to a system issue, present since the inception of the current records management system, hate crimes and types of bias do not transmit to the State/FBI,” Davenport Police Captain Jain Imming wrote in an email. “This issue has been reported to the vendor, but a solution within the software has not been identified. The Davenport Police Department and the State of Iowa have worked together and have determined an alternate solution to transmit this data.”

Imming added that Davenport Police will report hate crimes in the future. 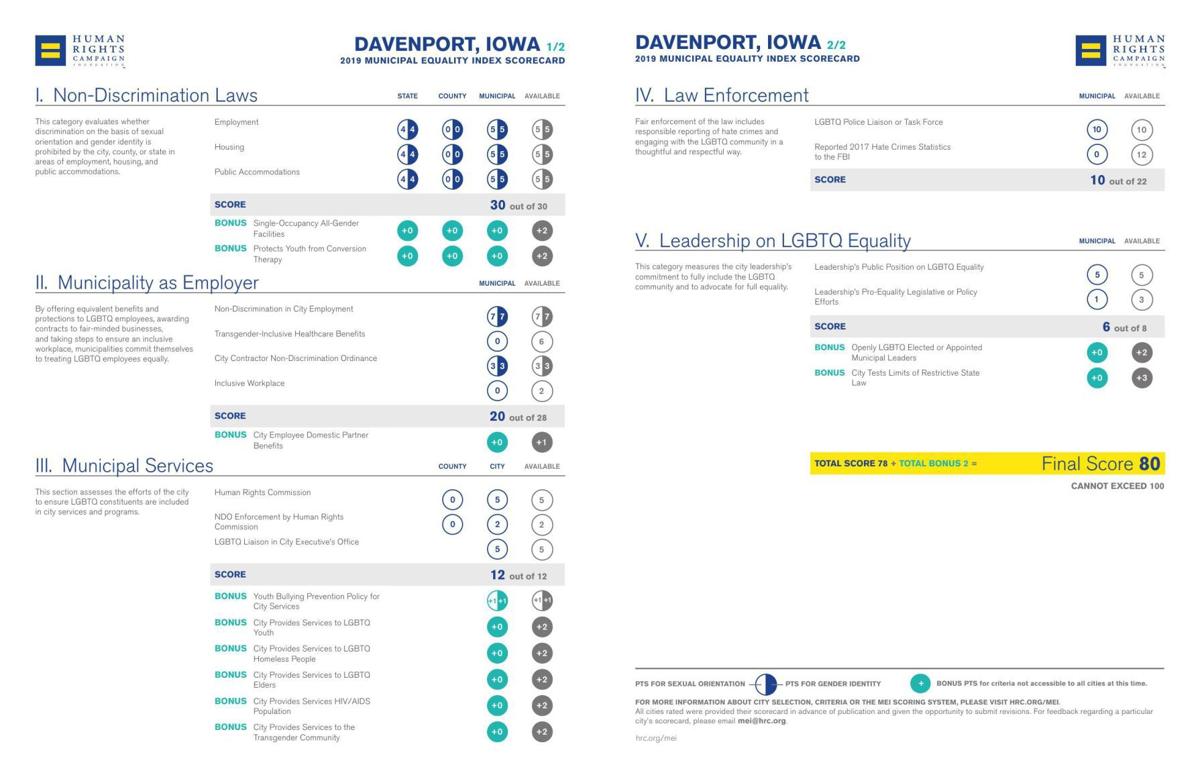 Davenport was also dinged six points for not having transgender-inclusive health care benefits. Lacey said the city recently revised its health care policy recently, but the changes were not enough to gain scorecard points.

Mike Hetrick, board member of Quad Citians Affirming Diversity (QCAD), noted both the recent progress the trans community has made and the distance still to go toward full equality.

What is the T in LGBT?

“It’s a matter of being able to have those resources here,” Hetrick said. “It’s not a large community, but the needs are growing.”

The 2019 scorecard matches Davenport’s score in 2018, leading some to advocate for changes in the city.

“The areas where we’re missing points are a great starting point for where our officials can create a more equitable and inclusive city,” Lacey said.

But Davenport has also slipped 20 points since 2017, in part because of non-reporting hate crime statistics and also because the city failed to get "bonus" scorecard points for providing city services to LGBTQ youth, homeless and elders.

Lacey said she wasn’t sure why the city didn’t earn those points in 2019. Three years ago, she noted, the city’s Civil Rights office provided funds to Quad Citians Affirming Diversity (QCAD), which provided some services to those communities.

Local advocates for equality emphasized how nonprofits provide essential services, even when their resources are strained.

“I understand that the city is not necessarily in the business of funding homeless services, for example. But when there is such a lack of services for a particular community that is in need, I think the city needs to step up and do something,” said Hendricks. “It is a huge, huge area of need.”

“Our city, which has always stood for diversity and inclusion, should also be willing to stand up and fight for some of these things,” he said. Although the lackluster index score was “disappointing,” Hendricks added, “I think there’s no reason why Davenport shouldn’t get 100 next time around.”

Davenport takes pride in being listed among 'queerest' cities

It was no surprise to Bill Boom to hear that Davenport made the top 10 of the "queerest cities in America," as judged by a gay news magazine.

Davenport scored well in recent report that rated equality measures for the lesbian, gay, bisexual and transgendered communities nationwide, b…