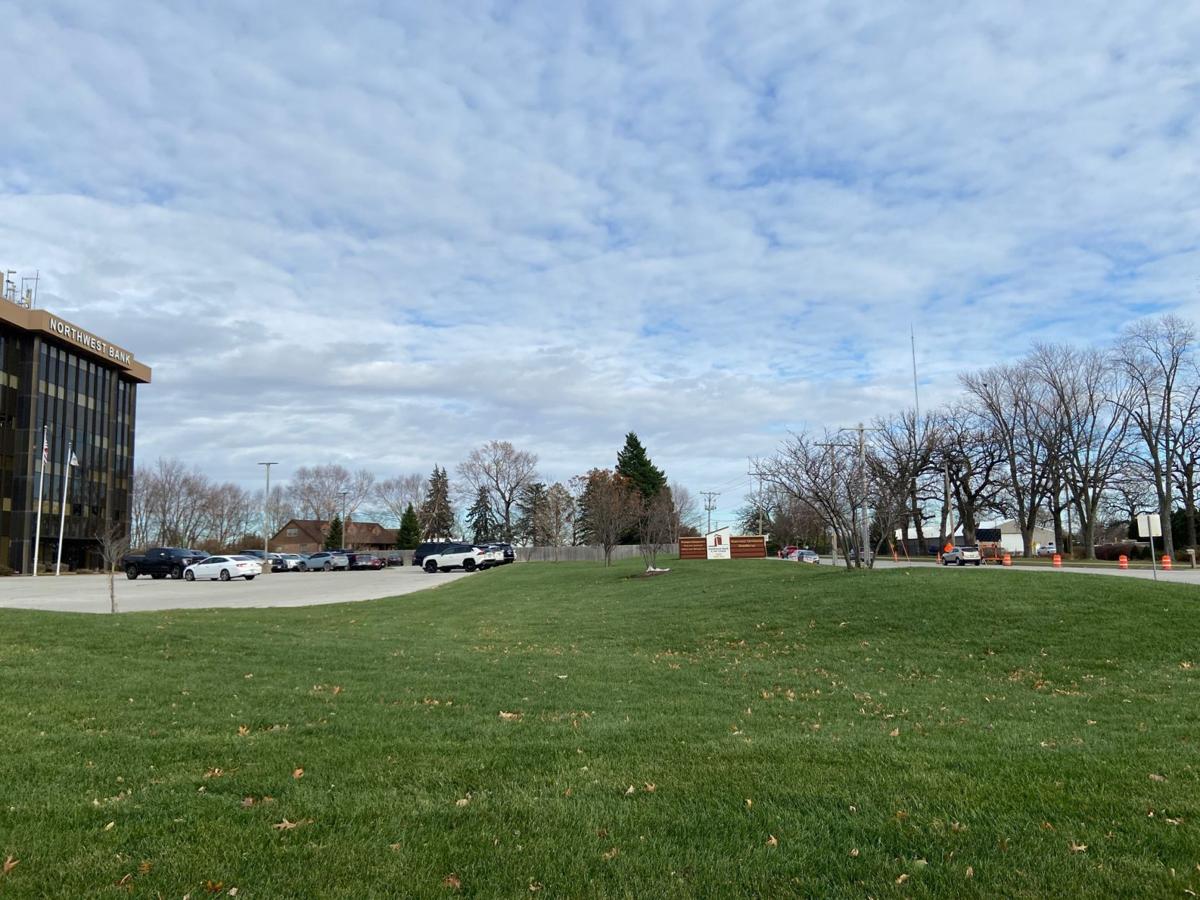 A Hungry Hobo restaurant will be the anchor tenant of a 4,800-square-foot building to be built in this greenspace at Bettendorf's Spruce Hills Drive and Middle Road. The restaurant in a Northwest Bank out lot is expected to open in May. 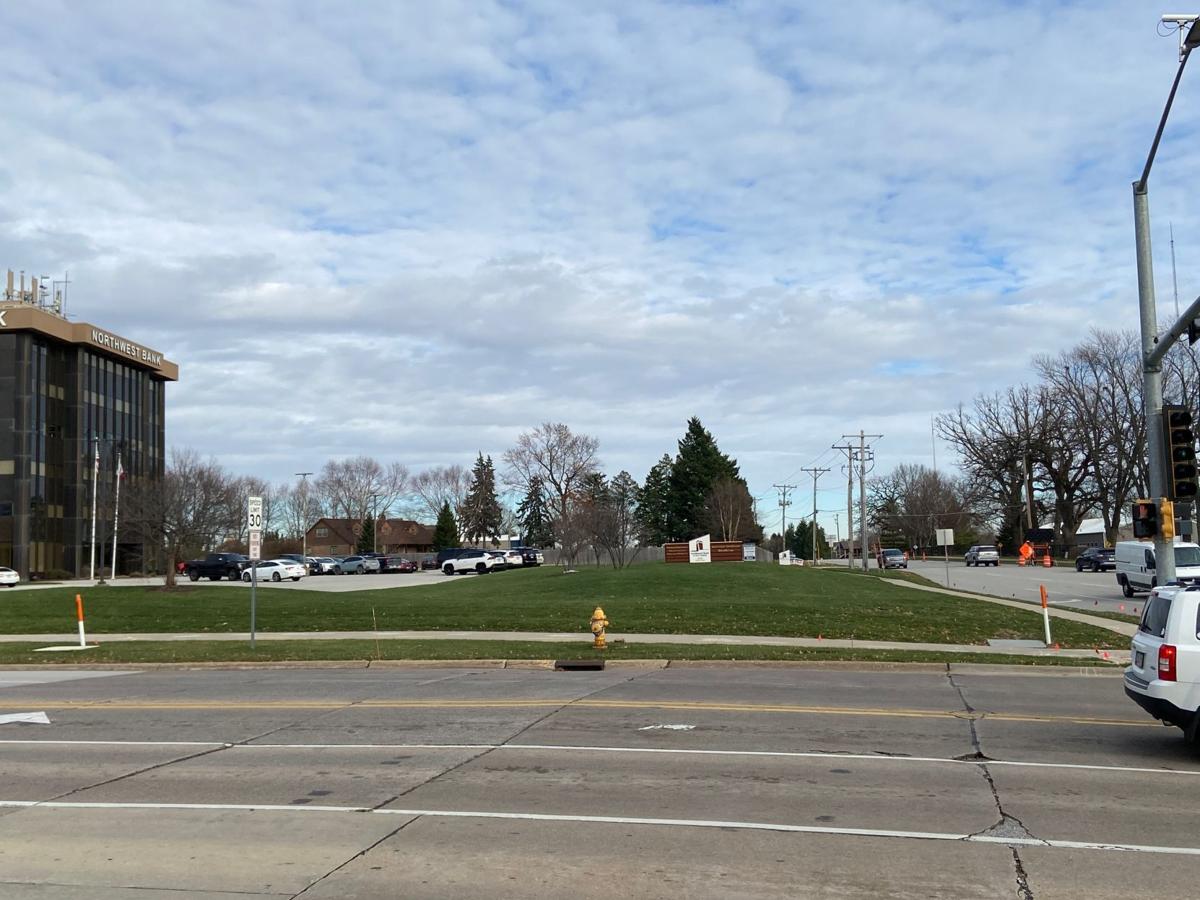 A 4,800-square-foot building with a restaurant and drive-through window is expected to be built in this greenspace in the Northwest Bank lot at Bettendorf's Spruce Hills Drive and Middle Road. Middle is the road to the right.

A one-story commercial building with a restaurant and drive-through window will be built in the Northwest Bank lot at the corner of Bettendorf's Middle Road and Spruce Hills Drive.

The Bettendorf City Council on Tuesday approved a site plan for a 4,800-square-foot building that would house a restaurant and one or two other businesses, depending on how the space is divided.

The building is being developed by the Slavens family, Joe Slavens, president and CEO of Northwest Bank, said. Construction is expected to begin yet this year, as soon as building permits can be issued and as weather allows.

Although he declined to identify the restaurant because the lease isn't signed yet, he said it is headquartered in the Quad-Cities and has multiple locations.

Approval of the plan came after two neighborhood residents spoke against it, and after aldermen discussed several concerns including increased traffic posing a safety issue, increased storm water runoff and, as Ald. Lisa Brown, At Large, said, because "I personally don't feel like it feels right.

"It's not Bettendorf," she said.

Although she voted for the development, she said she thinks the existing green space on the corner is "gorgeous" and would rather it stay that way, without pushing a building so close to the corner.

But, as city staff pointed out in the council's committee-of-the-whole meeting on Monday, the proposal meets all the requirements of city code, so there is no defensible reason to deny it. It also is consistent with the city's land use and comprehensive plans.

The one exception would be traffic safety, as the restaurant is expected to bring additional cars to the area and that, coupled with the development of a senior living campus to the northeast of the bank, could cause issues.

At present, the two access points are from Spruce Hills Drive and from the Northwest Bank driveway off Middle Road.

Related to project approval, Northwest Bank developers agreed to a cost-share agreement with the city in which they will help pay for a future traffic study and help pay for changes — such as the building of additional turn lanes or a traffic signal — if the traffic study determines those features are needed.

Meanwhile, the developers of the senior living complex are being asked to do the same.

Ultimately, payment for the traffic study and any recommendations would be shared 43.75% by the city, 43.75% by the developers of the senior project and 12.5% by the Northwest developers.

One of the residents speaking against the proposal, Ken Beck, asked the council to "put a hold on this development until we have a master plan for that whole corner."

When Northwest Bank first received approval to build in the 1970s, there was a private covenant, or agreement, for an 80-foot setback, and adhering to that would "keep the character of Bettendorf on that corner," Beck said.

But that covenant has since expired, and the current setback is 20 feet, Mark Hunt, the city's community development director, said.

Under the proposal approved Tuesday, the drive-through lane will be 20 feet from Middle Road, while the building itself will be 36-40 feet from the street, as the restaurant portion is wider than the remainder of the building, he said.

In a statement before the vote, Ald. Scott Webster, 5th Ward, said that in the future, the council needs to develop a policy about setback requirements for in-fill development, an issue it hasn't had to address very much because most development is new.

"We're not used to this," he said. "We've never really thought about infill as we have with 53rd."

In other business the council:

• Applauded the sale of general obligation bonds at 1.57% interest that will put $9.2 million in the city's Community Improvement Projects for the 2020-21 construction year.

Webster noted that an interest rate that low "is like free money."

Grading and infrastructure work has begun for a three-story, 62-home senior living cooperative going up on six acres behind Bettendorf's Cumbe…

A Hungry Hobo restaurant will be the anchor tenant of a 4,800-square-foot building to be built in this greenspace at Bettendorf's Spruce Hills Drive and Middle Road. The restaurant in a Northwest Bank out lot is expected to open in May.

A 4,800-square-foot building with a restaurant and drive-through window is expected to be built in this greenspace in the Northwest Bank lot at Bettendorf's Spruce Hills Drive and Middle Road. Middle is the road to the right.