A good Thursday to all. Showers and thunderstorms are likely today with some possibly severe. Here is the weather roundup from the National Weather Service.

The National Weather Service describes the situation in this Hazardous Weather Outlook, "Slow-moving thunderstorms with heavy rainfall may lead to minor flooding over portions of east central Iowa this morning.

"Scattered thunderstorms will affect much of the outlook area through the day with locally heavy rainfall and cloud to ground lightning the primary threats.

"Severe storms will be possible from late afternoon through this evening. The Storm Prediction Center has a Slight Risk west of a line from Independence through Muscatine, Iowa to Macomb, Illinois. A Marginal Risk is in place for the remainder of the outlook area. The main severe risk threats will be damaging wind and large hail. An isolated tornado is possible.

Widespread rain and thunderstorms are expected to continue overnight over east central Iowa into northwest Illinois. Severe weather is not expected, but there will continue to be a threat of locally heavy rainfall."

There's a 50 percent chance of showers and thunderstorms after 9 a.m. with new rainfall amounts between a tenth and quarter of an inch possible with higher amounts in thunderstorms. Skies will be mostly cloudy with a high near 78 degrees. Southeast winds between 5 to 15 mph will gust as high as 20 mph.

Tonight there's a 70 percent chance of showers and thunderstorms with new rainfall amounts between a half and three quarters of an inch possible. Skies will be mostly cloudy with a low around 68 degrees.

Friday will see a 40 percent chance of showers and thunderstorms. Skies will be mostly cloudy with a high near 79 degrees with winds gusting as high as 25 mph.

Friday's overnight low will be around 66 degrees. There will be a 20 percent chance of showers with winds gusting as high as 20 mph.

Geoffrey Friend and Joseph Schillig were simply trying to get home Wednesday afternoon after a hard day of work when a stolen car occupied by four boys who were fleeing police slammed into the trailer Friend was towing, destroying the trailer and causing the car to crash.

The four boys, all in their teens, fled on foot but were quickly captured by police. Read more.

A proposal to reclassify land to make way for the possibility of adding the Chicago-based restaurant Portillo’s to northeastern Davenport reached City Hall on Wednesday, drawing a chorus of worries from several area residents.

The proposal, to which Portillo’s has not officially committed, rests on changing a residential area into a commercial one. The real estate developer eyeing the land for rezoning wants to tear down nine homes along 53rd Avenue near its intersection with Lorton Avenue and put up a plaza with several businesses. Read more.

A Quad-City Times reader wants to know whether lightning ever strikes cell phone towers and if so, what kind of damage it does, and how much do landowners get to have a tower on their property? Our Ask the Times guru Roy Booker goes searching for the answer. Read more.

5. Your guide to weekend fun

"Mamma Mia," the musical packed with ABBA's classic songs such as "Dancing Queen," opens this week at the Circa '21 Dinner Playhouse in Rock Island. That's just one of the suggestions from entertainment reporter Amanda Hancock for fun things to do this weekend. Read more.

• Lancers get past Falcons, earn first state berth since 2015

Bonus Six: Check out these photos of bridge construction on the new Interstate 74 bridge across the Mississippi River. See what is new this week. The Quad-City Times has been following construction since day 1 capturing hundreds of images. Take a look back at how work has progressed..

Forty years ago this week, Van Halen, Journey, Atlanta Rhythm Section and the Doobie Brothers performed at the Mississippi River Jam on Credit Island. Step back to a time of bell bottom jeans and check out these images from that concert and more. And as a side note, I was one of the 25,000 people in the Credit Island audience. Party on.

Remember when the Ste. Genevieve called the Q-C home?

The Ste. Genevieve, the last steam-powered stern-wheeler cutterhead dredge to be operated by the Army Corps of Engineers, retired in 1984. Aft…

The Quad-Cities was hit with two Mississippi River floods 10 years ago in 2008.

Historic photos - Protesting in the Q-C

Anti-this and anti-that protests across the U.S. have made headlines recently. The Quad-Cities is not immune to protesting, so we thought it m…

A large fire erupted on Davenport's east side on the banks of the Mississippi River and  East Fourth Street on July 25, 1901. Before the fire …

Do you remember when these critters called Niabi Zoo home?

A look back at downtown Davenport the way it used to look long, long ago.

Looking back at the Quad-City Air Show

Hundreds of images of past Quad-City Air Shows.

1976 was the 200th anniversary of the birth of our nation and the Quad-Cities celebrated in red, white and blue finery. Here's a look back tha…

The Mississippi Queen visited Davenport at least 150 times, taking on a thousand or more passengers.

"Mamma Mia" opens this week at Circa '21 Dinner Playhouse in Rock Island. 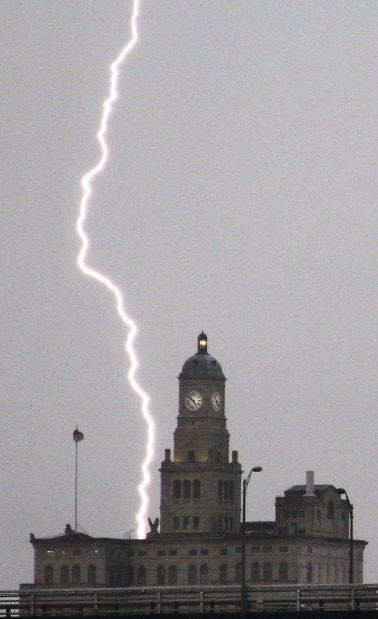 Lightning strikes like this hit many areas of the Quad-Cities. 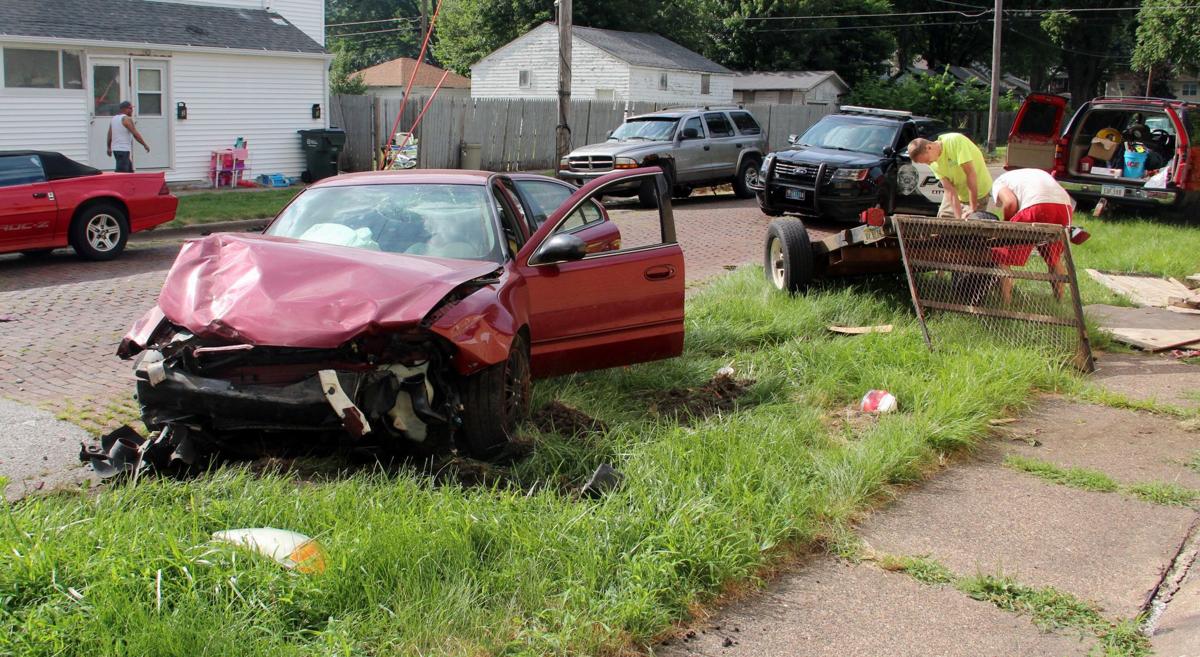 Geoffrey Friend, 30, right, and Joseph Schullig, 32, left, work to get Friend's pallet trailer ready to pull home Wednesday after four teens in an allegedly stolen Grand Am crashed into the trailer destroying it and totaling the car. 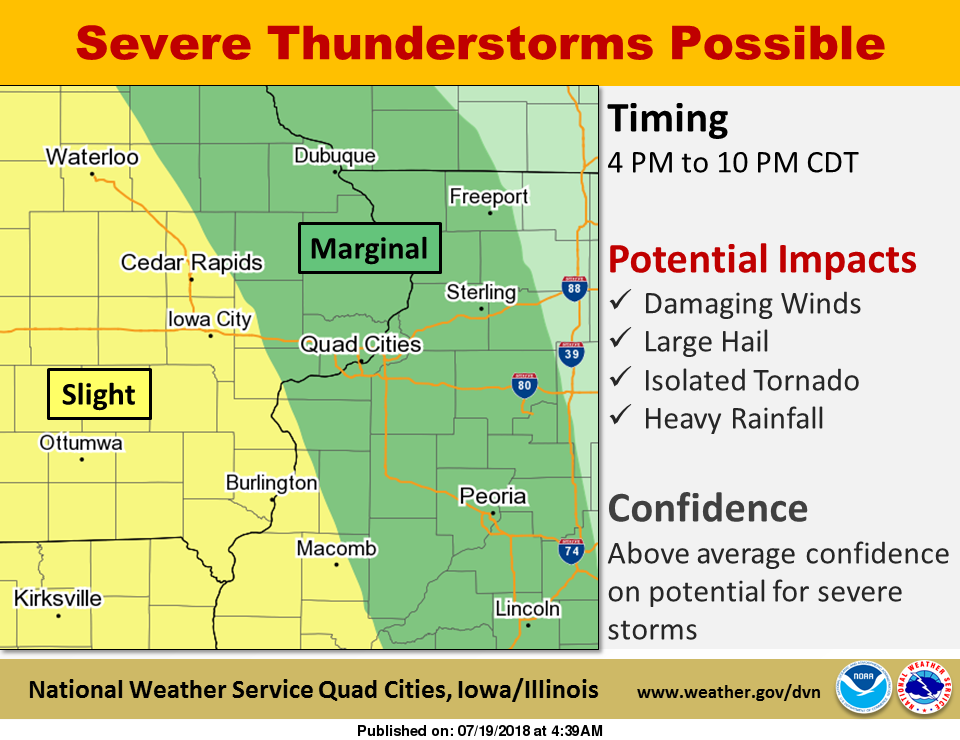 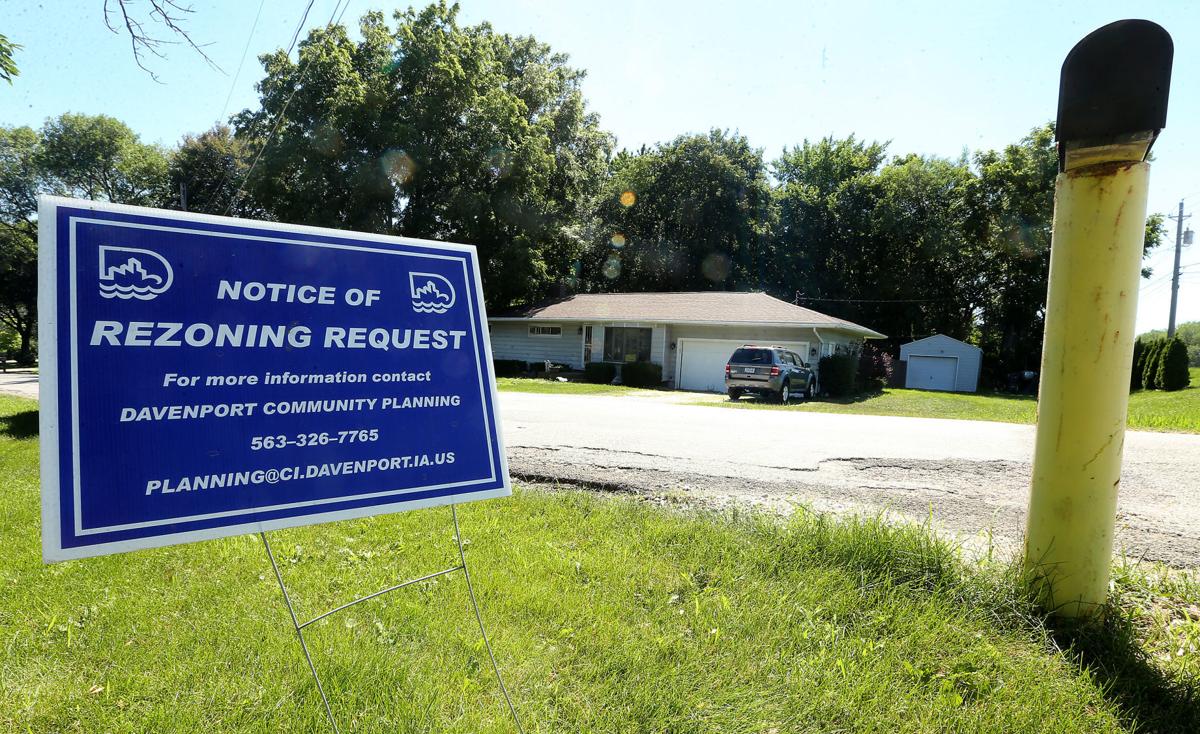 A notice of rezoning request staked at the corner of Fairhaven Road and 53rd Street was how some neighborhood residents learned that changes were in the offing. 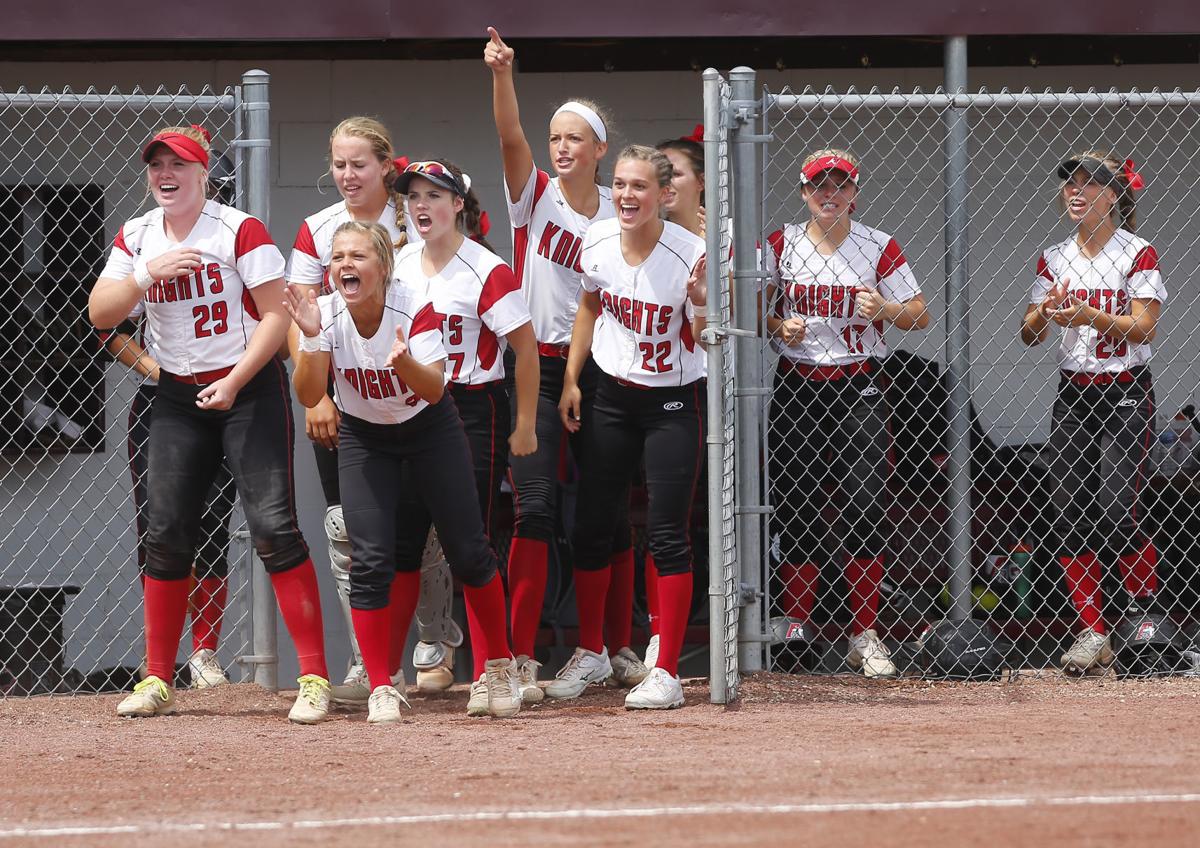 The Assumption dugout cheers after they score a run against Humboldt during the state softball semifinals at the Harlan Rogers Sports Complex in Fort Dodge last week. 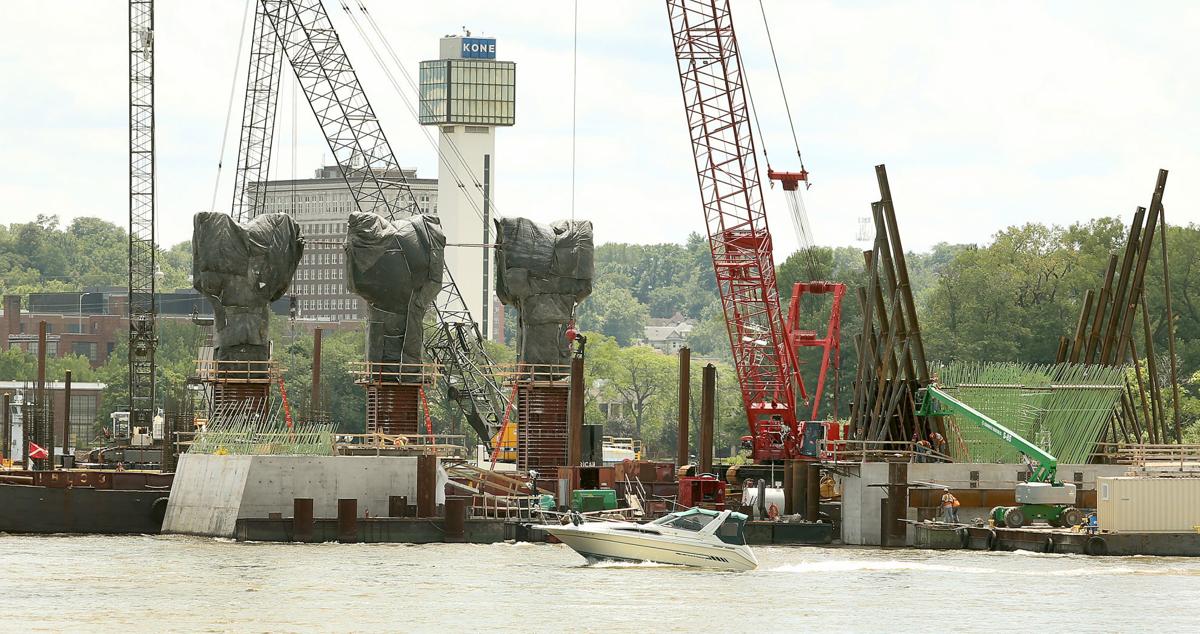 Construction continues on the new I-74 bridge, Wednesday, July 18, 2018, in Bettendorf and on the Mississippi River. 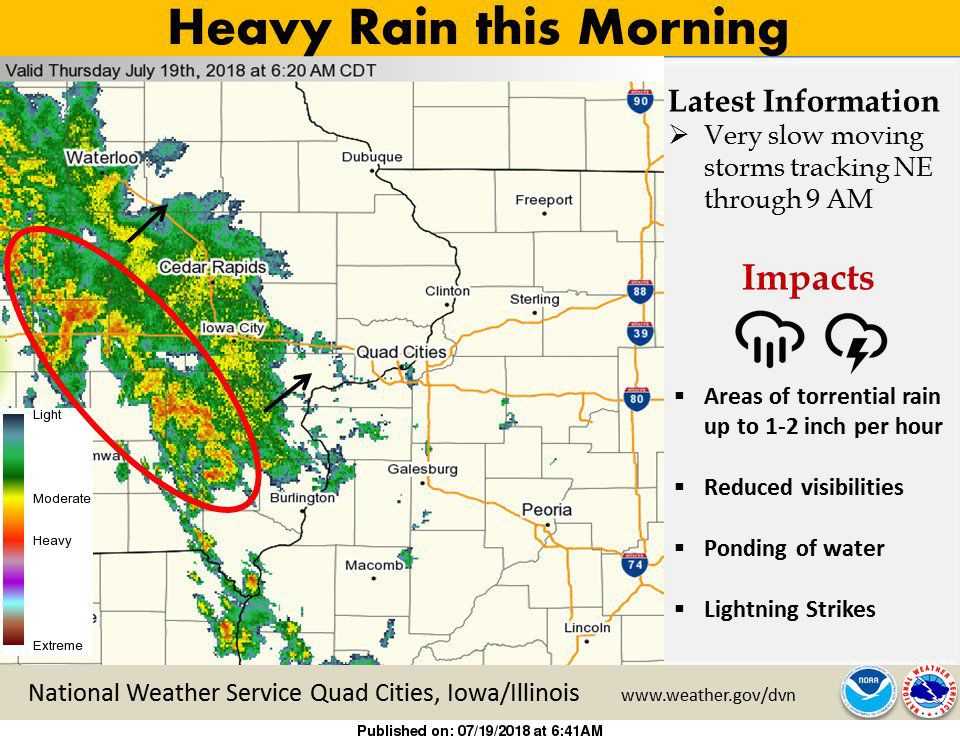