Scott County Supervisors sent a letter this week opposing the merger of two rail companies that, if approved, is expected to increase train traffic three-fold in the Iowa Quad-Cities.

Based on figures by Canadian Pacific as it seeks to merge with Kansas City Southern to become the first single-company rail line connecting Mexico, the U.S., and Canada, Scott County is among the counties that would see the greatest increase in train traffic — from about 8 trains a day to 22.

Freight along the new cross-continental route would have to pass through the Iowa Quad-Cities. In its application to the federal Surface Transportation Board, which will decide whether the merger forges ahead, Canadian Pacific expects to attract freight traffic from other rail routes and from 62,000 trucks a year because of greater efficiencies of a single-line rail system. 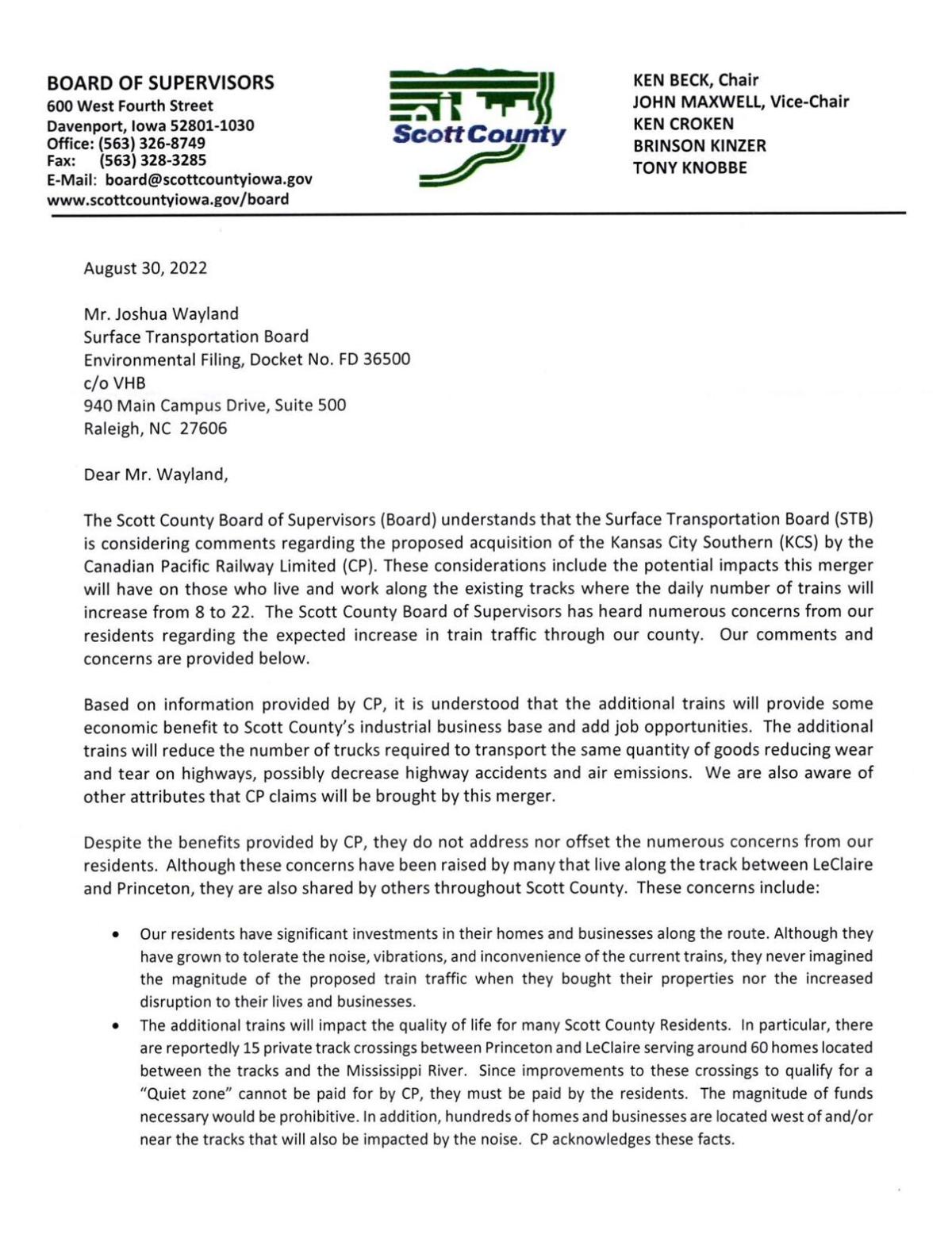 The rail companies expect that diverted traffic is expected then to increase the number of trains through the Iowa Quad-Cities.

In their letter, supervisors acknowledged the company's claims that the merger could bring jobs and reduce global emissions diverting freight from semi-trucks to trains. But, "despite the benefits provided by CP, they do not address nor offset the numerous concerns from our residents."

"We strongly urge the STB to prioritize public safety, livability, the impact on personal properties, damage to properties, impact on businesses and tourism, and environmental health of residents and businesses along the current tracks throughout our country," supervisors wrote to the Surface Transportation Board. "For these reasons, we cannot support the merger."

Supervisor Chair Ken Beck said the county has not been approached by Canadian Pacific with negotiations or offered settlements for train traffic mitigation like Davenport, Bettendorf, Muscatine, and LeClaire. The supervisors join the city of Camanche in opposing the merger.

Canadian Pacific spokesperson Andy Cummings wrote in an email: "CP continues to talk with many cities and counties, including Scott County, about local concerns regarding the CP-KCS merger."

Supervisors pointed to roughly 15 private track crossings between Princeton and LeClaire that serve roughly 60 homes between the tracks and the Mississippi River in unincorporated Scott County.

"Since improvements to these crossings to qualify for a "Quiet zone" cannot be paid for by CP, they must be paid by the residents. The magnitude of funds necessary would be prohibitive," supervisors wrote.

Supervisors also ask what safety precautions are being taken in case of a derailment or stoppage to make sure residences between the tracks and the river continue to have access to leave in an emergency.

Last month, the Surface Transportation Board and the Office of Environmental Analysis released a 357-page draft environmental impact statement that sought to measure the impact of the merger on noise, safety, the environment, cultural resources, among others.

Overall, the draft report concluded that the merger's impacts would be "negligible, minor, and/or temporary" save for train noise, "which could result in adverse impacts at some locations."

A public meeting held by the federal agencies for residents to comment on the draft impact statement will be held at 6 p.m. Sept. 13, at the River Center in Davenport.

A Davenport woman died Wednesday night when the truck she was in crashed while fleeing from the Iowa State Patrol.

'He was a quiet, nice kid': Killing of Angel Lopez Jr. stuns many in Davenport

The 17-year-old kid shot and killed Sunday in Rock Island was a boxer christened with the first name Angel.

Says the landlord, "They just up and bailed."

Police: 19-year-old Davenport man shot woman in the back

A Davenport man on probation for selling drugs out of his home is facing charges in connection with the overdose death of his 22-month-old son.

The recent discovery by members of the Quad-Cities Missing Persons Network of a Port Byron man missing for 16 days has inspired new confidence in the volunteer group.

Old 74 bridge will not go boom

The old I-74 bridge will not go out with a bang.