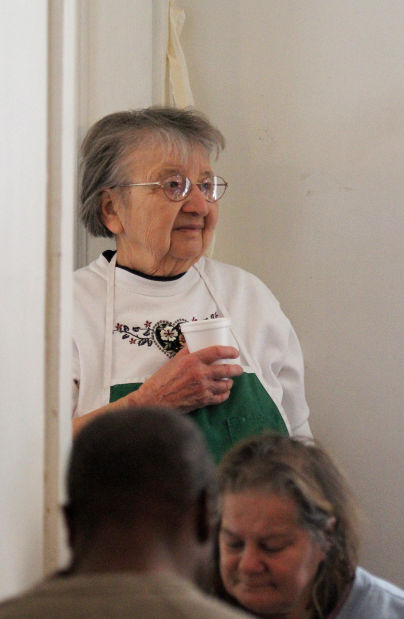 Sister Ludmilla Benda takes a short break during a Sunday dinner in 2014. 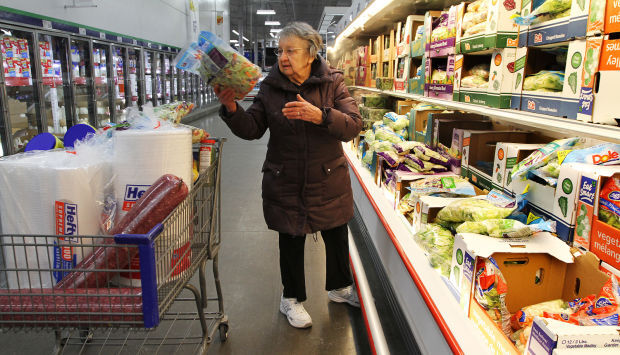 During her ministry, Sister Ludmilla Benda spent nearly half a week preparing for Sunday dinner, beginning with planning and shopping. Here she adds bags of salad to her shopping cart at Sam's Club on Elmore Avenue in Davenport. 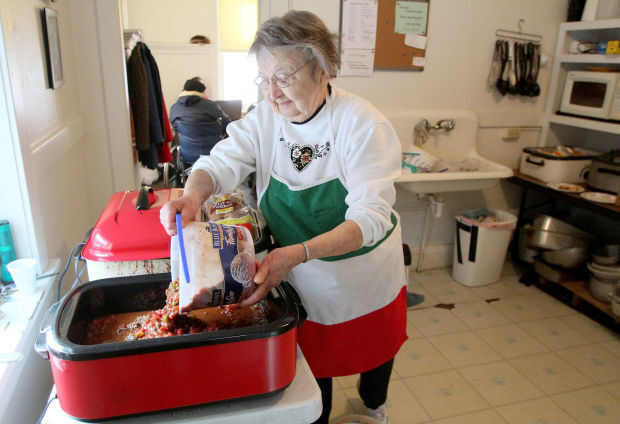 As breakfast winds down, Sister Ludmilla Benda begins assembling the noon meal by pouring already-made chili into one of her new roasters. 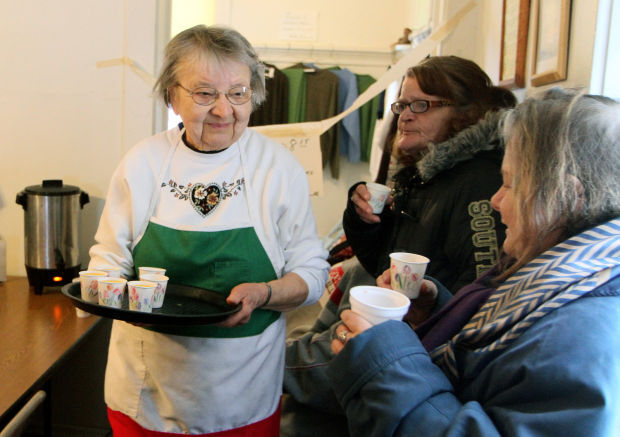 Sister Ludmilla Benda, who for decades served the poor and homeless of the Quad-Cities, for a time with Father James Conroy and then on her own when Conroy passed away, died Wednesday at the age of 93.

Benda served for 73 years as a member of the Religious Sisters of Mercy. For more than 18 years she operated Father Conroy’s Vineyard of Hope at the corner of 4th Street and Pershing Avenue in Davenport.

Benda and her volunteers at the Vineyard served meals to the homeless and poor on Sundays, but it was also a place where people could take a shower and wash their clothes, and if they needed shoes or a coat, or socks or a blanket, Benda usually had something that would fit.

“She was a living saint,” former Davenport Mayor Bill Gluba said. “If everyone were like Sister Ludmilla we’d have a wonderful, wonderful world.

“Sister Ludmilla, Father James Conroy and Father Marvin Mottet, they devoted their whole lives to helping others,” Gluba said. “They practiced humility and poverty in accordance with their religious vows, but she was a brilliant woman.”

Gluba said Benda was ahead of her time in terms of women breaking the glass ceiling because she had nurses training before entering the religious life in 1947 and then served as head administrator for the former Mercy Hospital (now Genesis Medical Center West) in Davenport and Mercy Hospital in Chicago.

Gluba said Benda helped Conroy begin a food window for the needy in 1987 at St. Anthony’s Church in downtown Davenport. When Conroy passed away, she opened the Vineyard, which served 120-200 people on Sundays and holidays.

Former Scott County Attorney Bill Davis, a longtime volunteer for the Vineyard, said Benda was extremely organized and she was in charge.

“Unless you went to Catholic school, you don’t understand,” Davis said with a chuckle. “There was no discussing things. I would help her when she needed to go shopping, and, boy, could she shop. She got quality stuff but never paid too much. She would cook all week to prepare for Sunday.

“Nobody else served on Sunday,” Davis said. “If they hadn’t come to us they wouldn’t have eaten. Sister Ludmilla saw a need, and she filled a void.

“Hers was truly a labor of love, but she was all business,” Davis said. “She, Father Conroy and Father Mottet, they were religious people for the people.”

Mary Bakeris-Gullion and her husband, Randy, also volunteered at the Vineyard.

“My grandparents were friends with Father Conroy and Sister Ludmilla,” Bakeris-Gullion said. “My mother was a nurse at Mercy when Sister Ludmilla was there, and she said, “Your mom was one of the best nurses we ever had.’”

On Sundays, Bakeris-Gullion volunteered at the Vineyard at 7 a.m. and stay until noon until the second-shift volunteers arrived.

“She did all the shopping for the breakfasts and lunches that she served,” Bakeris-Gullion said. “Everything she made was homemade.”

But Benda had a way for doing things and a place for everything. “Bill Davis and I, if we did something wrong, she’d say, ‘That’s not how I do it,’ ” Bakeris-Gullion said. “She ran a tight ship.”

“It was an honor to volunteer for her every Sunday,” she added. “This was her mission in life, to take care of the homeless. She worked so hard and never wanted anything.”

St. Anthony’s will have a Mass for Sister Ludmilla on Feb. 13 and 14, Bakeris-Gullion said.

Sister Ludmilla Benda takes a short break during a Sunday dinner in 2014.

During her ministry, Sister Ludmilla Benda spent nearly half a week preparing for Sunday dinner, beginning with planning and shopping. Here she adds bags of salad to her shopping cart at Sam's Club on Elmore Avenue in Davenport.

As breakfast winds down, Sister Ludmilla Benda begins assembling the noon meal by pouring already-made chili into one of her new roasters.