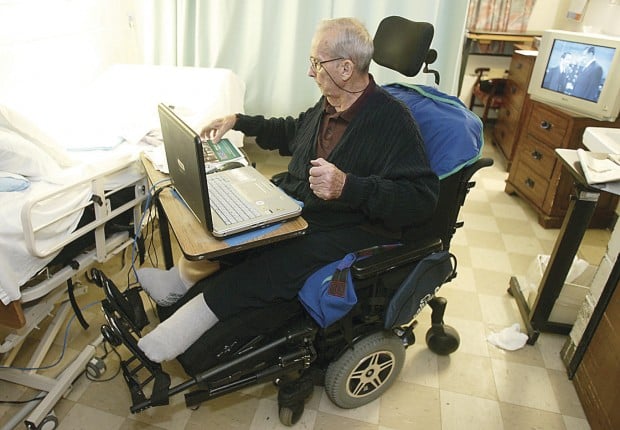 Jerry Bretag, 77, works on his laptop computer in his room at the LaSalle (Ill.) County Nursing Home. He is one of Illinois' oldest known survivors of the debilitating condition called spina bifida. Monday January 25, 2010. (Larry Fisher/QUAD-CITY TIMES) 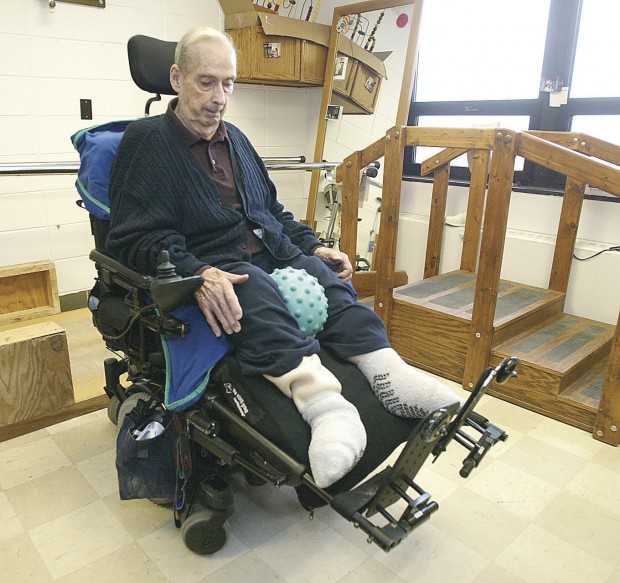 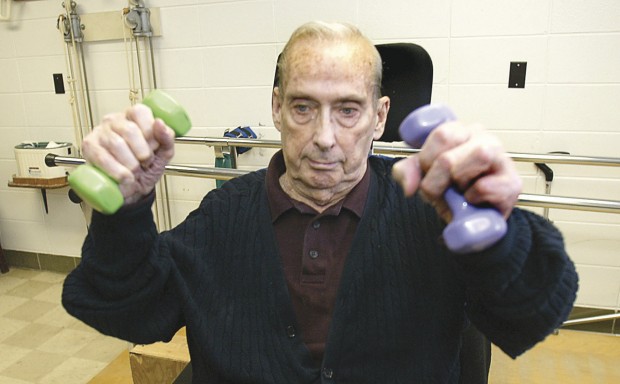 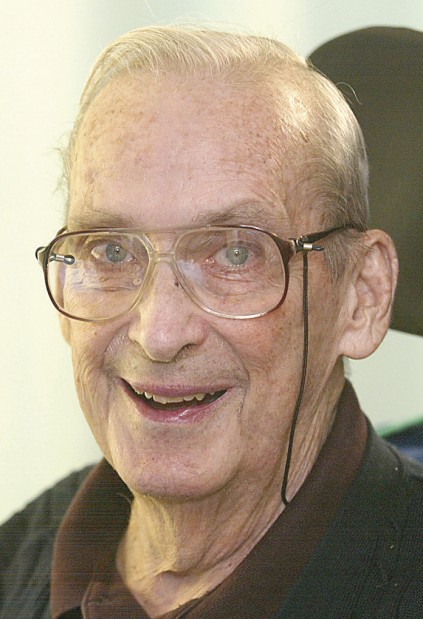 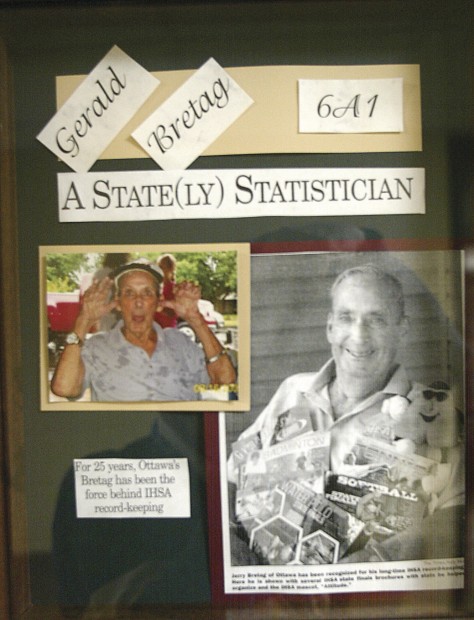 Doctors with expertise in dealing with the condition known as spina bifida told Jerry Bretag he would die as a teenager.

By the time he reached his 30s, he was told by some of the most prominent medical minds involved with the study of spina bifida that he would not live much longer.

Now 77 years old, Bretag continues to defy the odds. He lives a quiet but fruitful life in the La Salle County (Ill.) Nursing Home. In fact, the former Quad-City resident is one of the oldest-known survivors of the condition in either Illinois or Iowa and probably the nation.

He has been coping with spina bifida ever since his 1932 birth.

Spina bifida is a disorder that involves incomplete development of the spine. The base of his spinal cord was open when he was born, and permanent nerve damage occurred to all parts of his body below that point.

Most spina bifida patients develop hydrocephalus — a condition more commonly known as water on the brain — and have to be cared for all their lives. That aspect of the condition was not effectively treated until the 1970s, so older survivors of spina bifida are typically baby boomers in their 50s or 60s. Bretag considers himself fortunate to have avoided that condition.

Doctors at the former St. Francis Hospital in Peoria, Ill., fought to save Bretag’s life through most of his adolescence. Despite all the obstacles, he graduated from high school, attended college and went on to a 40-year newspaper career that included a quarter-century at the Quad-City Times. In those ways, he has had what most people would call a typical life.

But Bretag was never able to walk without canes and has fought daily for independence.

The spina bifida meant Bretag never had any feeling below the knees, and his left hip socket was not fully formed at birth.

But he managed to thrive in his own way. He is the fifth of eight children

born to his family from Ottawa, Ill., a city of about 20,000 roughly 100 miles east of the Quad-Cities. When he was very young, he was helped by his siblings — four burly brothers and three sisters who would include him in their activities. They would carry him to the beach at nearby Starved Rock State Park, and he learned to be a good swimmer. To play baseball, they would prop him up at home plate to hit the ball and assign someone else to run the bases.

Treatment at the hospital in Peoria kept him away from his family for weeks and even months at a time. This was during the Great Depression and World War II, when gasoline was rationed and expensive. He had few visitors at the hospital, but he now believes that helped spawn his love of reading.

At the age of 12, he was put in a full body cast as the Peoria doctors attempted to fix the misshapen hip socket. He was given Jell-O for the first three days because his stomach could not change shape while the plaster of Paris dried around his body.

He now credits that procedure with allowing him to walk, by using canes in either hand, for many years. In fact, he walked and lived independently until he was 72 years old.

“You don’t know how important walking is until you can’t,” he said.

Spina bifida means there is always something wrong with Bretag’s health. There are bedsores, gastro-intestinal and urinary tract issues and allergies. Four years ago, he forgot to check his toes, and one had to be amputated because it became infected. He caught a virus during the 2008 holiday season and was sick for two months.

But he has rebounded each and every time. He has held a part-time job doing sports statistics for the Illinois High School Association for almost 30 years, and he insists on and receives daily physical therapy for his upper body. Today, he can reach out from a sitting position in his electric wheelchair to touch his fingers below the knees.

“I’ve never been able to do that before,” he said with pride.

Besides the physical aspect, spina bifida has meant a major personal cost to Bretag’s life.

“I never was much of a husband or father,” he said. When he lived in Davenport, he was married, had a house with a swimming pool on East Central Park Avenue and helped raise his wife’s son. But the marriage ended in divorce, and Bretag thinks it was mainly because of his physical limitations.

“Mothers used to say to me, ‘Leave my daughter alone,’ and that hurt,” he said. “They tried to make me feel bad because I couldn’t walk.”

Bretag’s sports journalism career lasted until 1984, when he retired and went on disability. His physician was the late Dr. John “Jack” Sunderbruch, who urged him to make that decision. Bretag lived in the Quad-City area for several more years, volunteering at what was then called the Hardee’s Golf Classic and at other activities.

In 1996, he moved back to Ottawa and to a nursing home in 2002. He’s been in the La Salle County home for six months and likes it because the location is not far from his hometown and close to where several family members live.

Every morning, he reads the Chicago Tribune, eats breakfast and does his physical therapy. In the afternoon, he works on the high school sports statistics.

He has some advice for younger people with physical disabilities.

“Try to live your life just like anyone else,” he said. “You may be a child who can’t walk, but maybe your brain is good. You can read. Try to be as normal as possible.”

As for himself, Bretag said, “My life has not been very sad. I’ve really been lucky.”

These robots are made from biological tissues and can self-replicate

These robots are made from biological tissues and can self-replicate

A long forensic mystery solved? Dating fingerprint may no longer be a problem

A long forensic mystery solved? Dating fingerprint may no longer be a problem

What is spina bifida?

Spina bifida is a birth defect that involves incomplete development of the brain, spinal cord and possibly the protective coverings on both.

That Jerry Bretag has survived so long with spina bifida surprises the experts who treat patients with the disorder every day. If Bretag, 77, is not the oldest, he is at least one of the longest-lived people with spina bifida in Illinois and Iowa, where he resided for many years before retiring back to his hometown area in north-central Illinois

Jerry Bretag, 77, works on his laptop computer in his room at the LaSalle (Ill.) County Nursing Home. He is one of Illinois' oldest known survivors of the debilitating condition called spina bifida. Monday January 25, 2010. (Larry Fisher/QUAD-CITY TIMES)