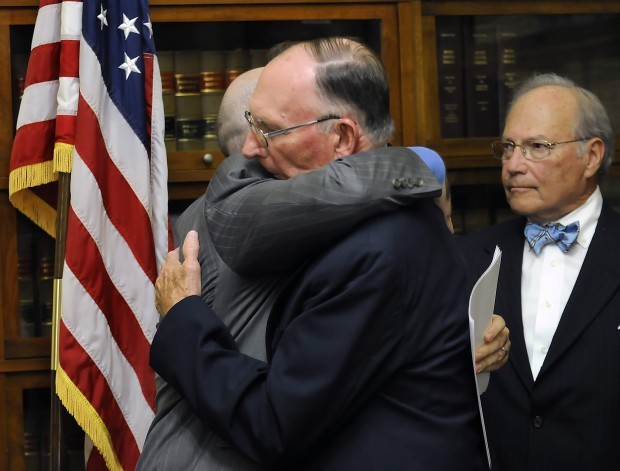 Darrel Parker and attorney Dan Friedman hug Friday in the Attorney General’s Office in Lincoln, Neb., after Parker was exonerated of first-degree murder. 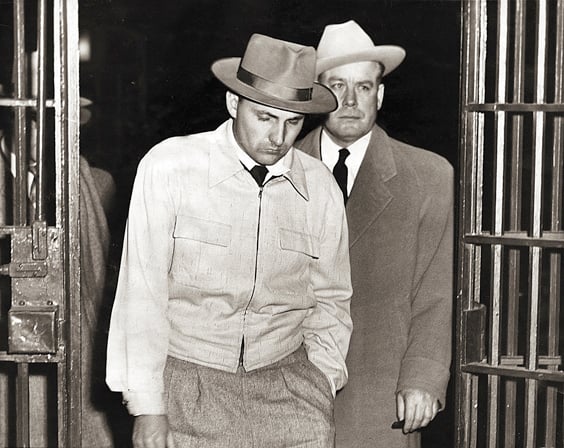 The state of Nebraska gave Darrel Parker his freedom decades ago. Friday, it gave him back his innocence.

The moment Parker, who now lives in Moline, had awaited for nearly 57 years came on the second floor of the Capitol: an apology and a final, formal admission that he didn’t kill his wife on a snowy Lincoln morning in 1955.

The state had just agreed to stop fighting Parker’s wrongful conviction lawsuit. Instead, Attorney General Jon Bruning apologized, admitted Parker was wrongly convicted and announced the state would pay him $500,000, the maximum allowed by law.

“It became crystal clear that Mr. Parker is innocent,” Bruning said. “This was the most important thing I could do as attorney general, to right this wrong.”

And with that, Parker’s lifelong legal saga — his insistence that his confession was coerced, his appeals, his search for missing evidence, his lawsuit, his refusal to stop at nothing less than his exoneration — was over.

Over, more than a half-century after it started, in a small home in Lincoln’s Antelope Park.

The bloody, brutal crime days before Christmas shook Lincoln, which had just reached a population of 100,000.

Darrel Parker was a year into his job as Lincoln’s first forester, and his wife, Nancy, 22, was developing recipes for Gooch’s flour and noodles and hosting a television cooking show.

He stopped home for lunch Dec. 14, 1955, to find his wife’s beaten body. She had been bound, raped and strangled.

Police questioned a con named Wesley Peery, released him, and then — just days after Nancy was buried — put Parker in a windowless room with John Reid, a polygraph operator from Chicago.

Parker recanted the next day. For decades, he and his lawyers have argued the confession was coerced, that Parker was tortured psychologically, even drugged.

But the confession was enough to convict the 24-year-old of first-degree murder, and he was given a life sentence.

He was a model prisoner, put in charge of the penitentiary’s grounds, and allowed to serve his time in the unlocked greenhouse.

He made a friend in prison, Parker said Friday, a man serving life for killing a gas station attendant.

He told his friend: “As long as I live, I shall fight this.”

He would never get Nancy back. But he spent most of his adult life trying to restore his name. He argued his case to the U.S. Supreme Court. He was paroled in 1970 — after his confession was deemed coerced — and pardoned in 1991.

But he continued to seek a full exoneration. He hoped DNA testing — unavailable at the time of the crime — would eliminate him as the killer. Then he learned much of the evidence, including crucial hair and semen samples, had vanished.

Through all of this, he was rebuilding his life. He found work with a tree company in the Quad-Cities.

He married Eleanore — Ele — in 1971. He got a job with the Moline parks department and worked his way up to supervisor. He retired, then spent the next 13 years working for a law firm.

He retired again earlier this year, and he and Ele moved into a retirement home.

His drive to clear his name built momentum in the past two years. First, in 2010, Lincoln native David Strauss published “Barbarous Souls,” which examined the crime, the case and Parker’s relentless efforts to clear his name.

And the next year, Lincoln attorneys Herb and Dan Friedman took his case, suing the state for $500,000 under its recent wrongful conviction and imprisonment law.

As a pre-law student in 1956, Herb Friedman sat in on some of Parker’s original trial.

“This was the most significant murder case in Lincoln in the 1950s,” he said last year. “It was controversial from the beginning.”

The lawsuit — brewing for months in the form of briefs and motions — moved to the courtroom last week for a hearing that drew Darrel Parker back to Lincoln, an old man this time, straining to hear what the lawyers and judge were saying.

Parker’s lawyers asked the judge to dismiss the case in his favor, citing a series of briefs in which the attorney general acknowledged Parker’s confession had been coerced.

The state’s lawyers objected, the judge took it under advisement, and Parker’s lawyers worried they would have to wait months to move forward.

That’s why they were surprised when the attorney general’s office contacted them earlier this week.

“It was a pretty incredible thing for the state to go from filing a motion to completely dismiss the case, to withdrawing that motion and asking for a trial, and then to say, ‘You’re right, we’re wrong.’ All in the span of about 10 days,” Dan Friedman said Friday.

At the news conference, Bruning was asked about his reversal.

His office handles thousands of cases, he said, but he took a personal interest in this one. The more he read, the more convinced he became of Parker’s innocence. A light went on, he said.

While on death row for killing a Havelock, Neb., woman in 1975, Peery told his lawyers he had killed Nancy Parker but made them pledge not to disclose his confession until after he died.

A heart attack killed Peery in prison in 1988, but his confession hadn’t helped Parker’s case — until now.

Parker accepted the attorney general’s apology. All he wanted was to be treated fairly, he said. And Friday, he was.

“It can’t possibly make up for all those years,” he said, but added: “I’m not bitter. I’m not built that way.”

Parker has returned to Lincoln several times since his parole in 1970, and he always avoided the Antelope Park home he shared with Nancy.

He planned to change that Friday.

“Today, I’m going to go back, because I can handle it now.”

LINCOLN, Neb. — Darrel Parker’s 57-year fight to clear his name ended Friday at the Capitol, with the Nebraska attorney general’s office offering an apology, $500,000 and a complete exoneration.

Parker, now 80 and living in Moline, was convicted of first-degree murder in the Dec. 14, 1955, slaying of his wife, Nancy, in their city-owned home in Antelope Park.

He was paroled and pardoned but never exonerated — until Friday.

In his wrongful conviction lawsuit, filed last year, he said he was coerced into giving a false confession in the rape and murder of his 22-year-old wife.

The lawsuit invoked the death row confession of another man, a convicted killer, who said he murdered Nancy Parker. And it pointed out that critical evidence and court files had disappeared in a case in which all of the original players, except Darrel Parker, have since died.

The state didn’t settle the suit; instead, it filed an offer of judgment — agreeing with the lawsuit and Parker’s claims. The $500,000 is the maximum allowed under Nebraska’s 2009 Wrongful Conviction Act.

“It’s just about doing the right thing. We want to do the right thing,” Attorney General Jon Bruning said. “It became crystal clear that Darrel Parker is innocent.”

The Parkers, both Iowa State grads, had moved to Lincoln after Darrel was hired as the city’s first forester. Nancy developed recipes for Gooch’s flour and noodles and hosted a cooking show on KOLN/KGIN-TV.

Parker and his lawyers have long pointed toward a former city employee named Wes Peery. He had done work around the house in Antelope Park before the killing, and he was the first suspect questioned by police.

While on death row for killing a Lincoln woman in 1975, Peery told his lawyers he had killed Nancy Parker but made them pledge not to disclose his confession until after he died.

Peery died of a heart attack in 1988, but his confession hadn’t helped Parker — until now.

And although Parker has returned to Lincoln several times since his parole in 1970, he hadn’t been back to the Antelope Park bungalow he shared with Nancy for nearly 57 years.

He was going to change that Friday.

“Today, I’m going to go back, because I can handle it now.”

Watch Now: 'We can do better' Gilbraith to run for Davenport mayor

Watch Now: 'We can do better' Gilbraith to run for Davenport mayor

Timeline of the Darrel Parker case:

Wes Peery was on death row in 1978, condemned to die for tying up a woman and shooting her three times.

Author married into Parker case, but stayed for its final chapter

David Strauss was just a boy when Darrel Parker was convicted of killing his wife in 1955.

Darrel Parker and attorney Dan Friedman hug Friday in the Attorney General’s Office in Lincoln, Neb., after Parker was exonerated of first-degree murder.