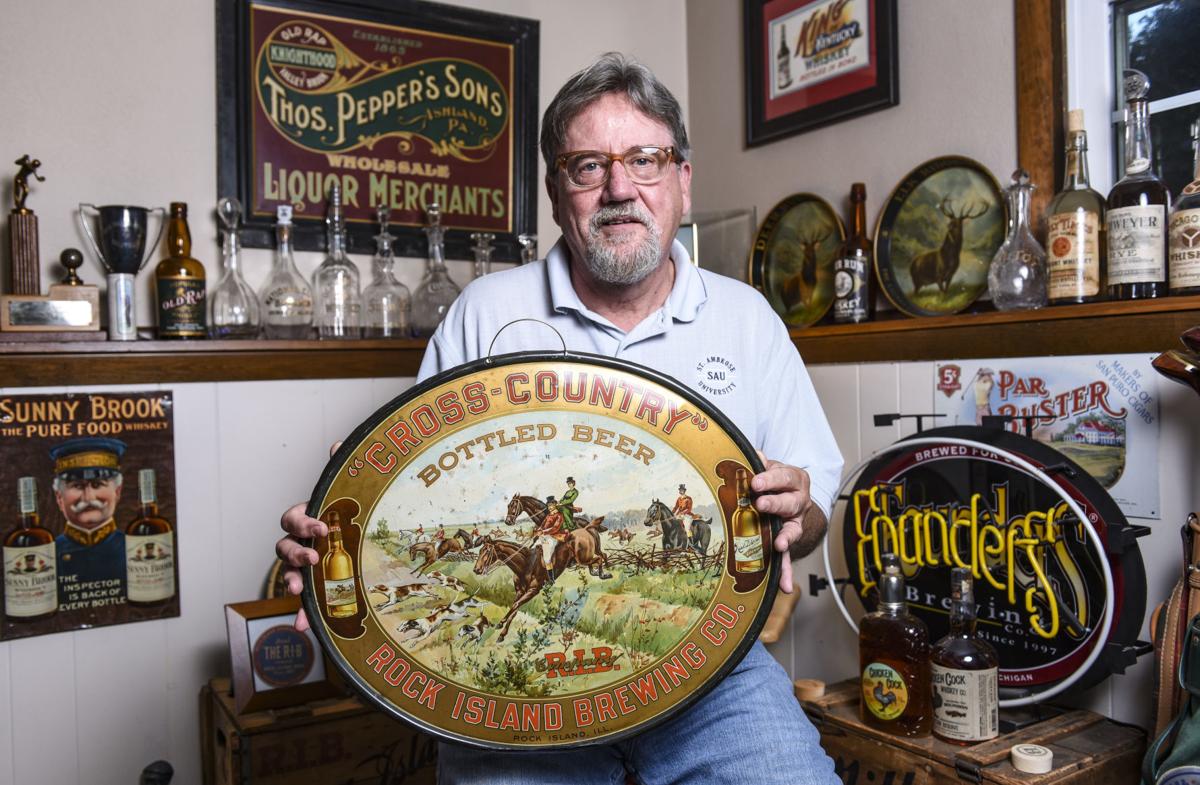 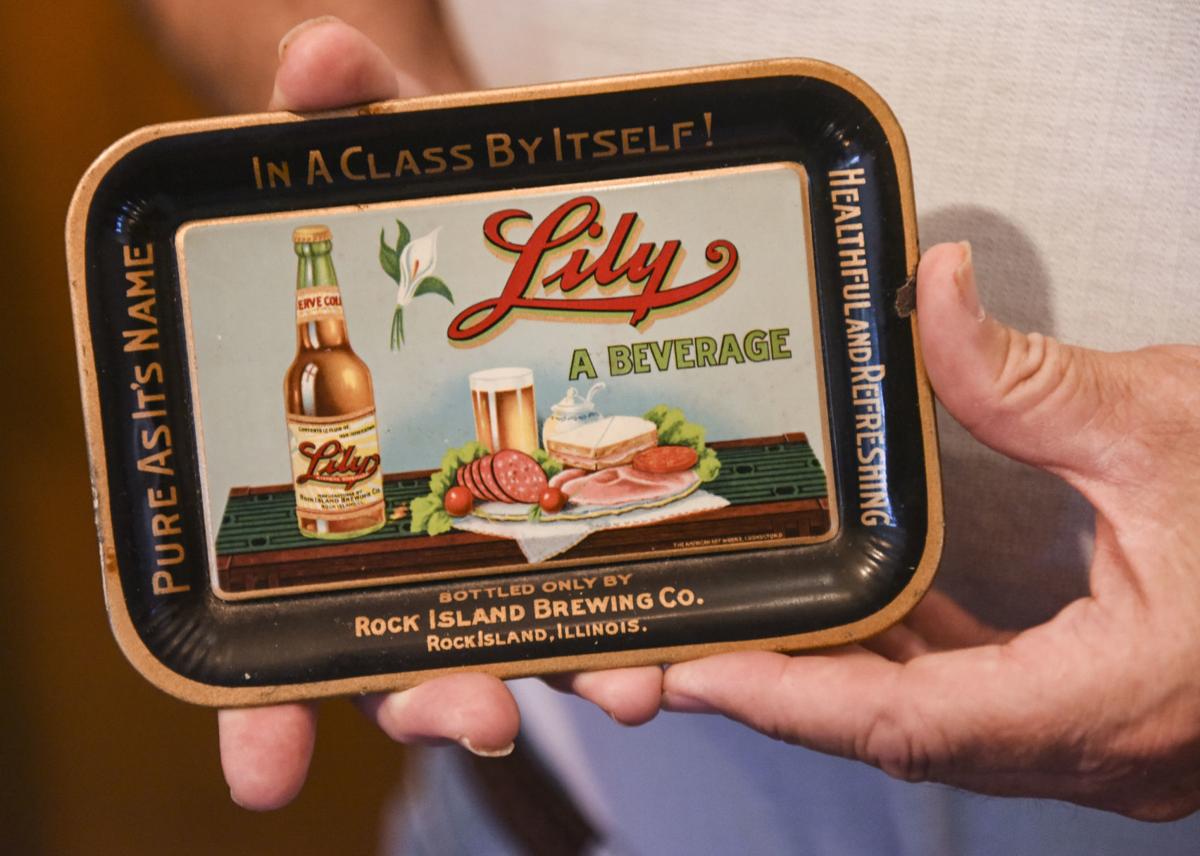 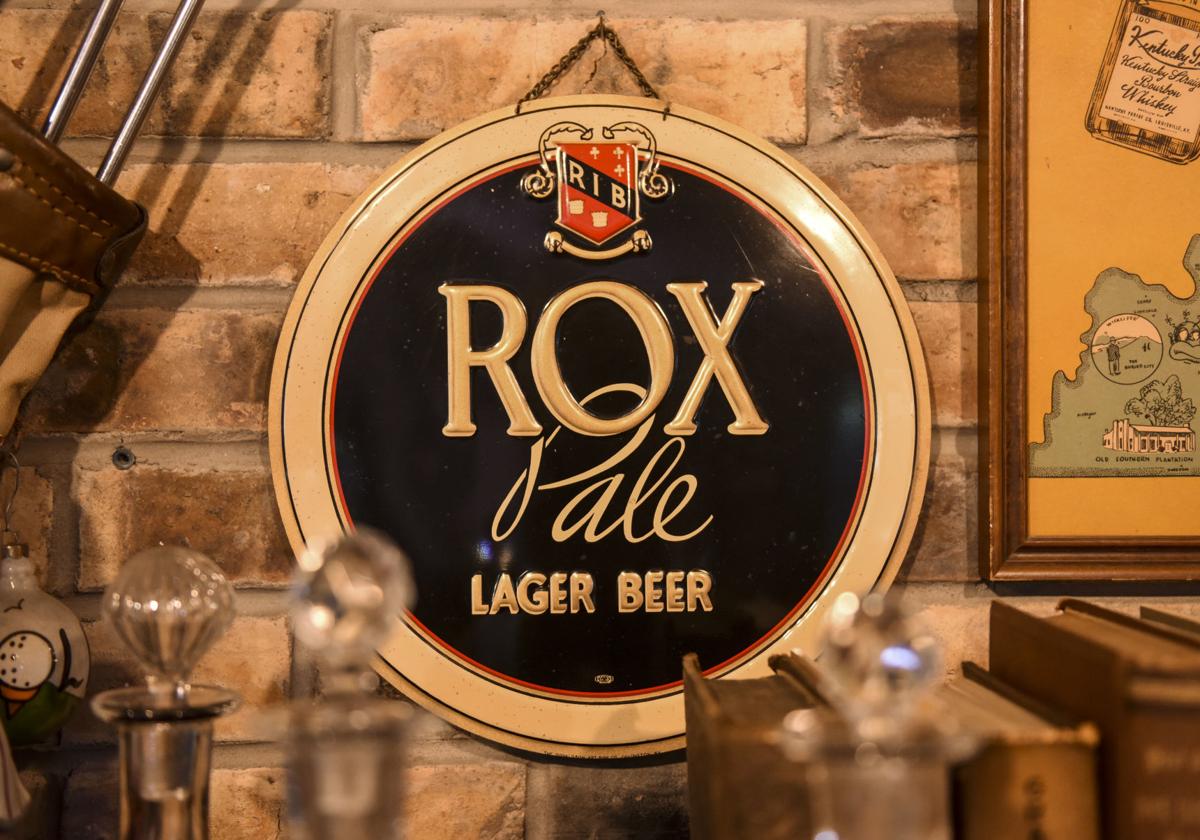 An advertisement for Rock Island Brewing's last "Rox" beer, made in 1939. 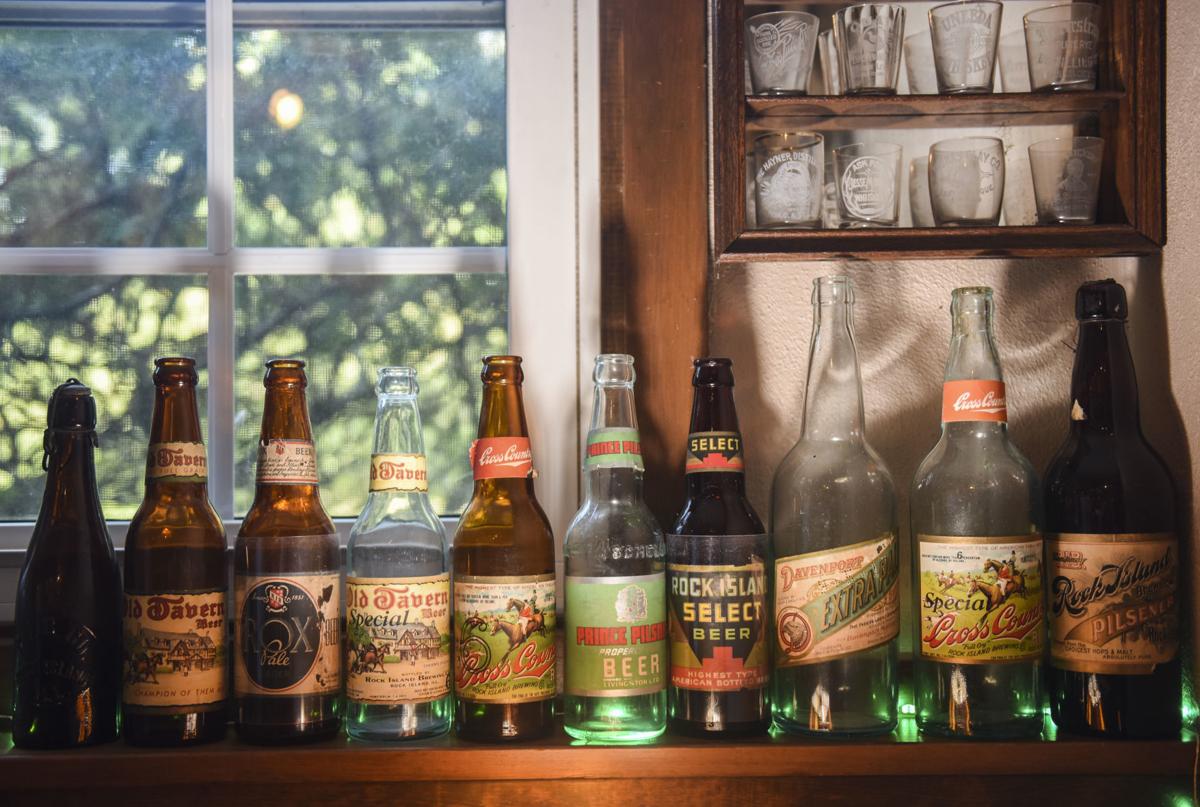 Various samples of Quad-Cities beer bottles, ranging from 1800-1900 at the home of Mike Wenthe.

TAYLOR RIDGE — Some guys have a man cave in their basement. Mike Wenthe has a liquor cave — or what might be better called a shrine to whiskeys and vintage Quad-Cities beer.

The 66-year-old Moline native has spent 40-plus years working to not only sell beer, wine and spirits throughout the region, but since college at the University of Kansas has been an avid collector of their memorabilia. His handsome Taylor Ridge home includes framed late 19th-century advertisements and illustrated calendar pages for the old Rock Island Brewing Co., and the basement is packed with vintage bottles, signs, coasters, ads, and more.

"It all has evolved as a hobby out of my work," Wenthe said recently, noting he worked for Baker Liquor and Flynn Beverage in Rock Island. He retired from full-time liquor sales four years ago, and works part-time for a Chicago whiskey distributor, BC Merchants, averaging a day a week.

“All along the way, I was an antiquer,” Wenthe said. “The beauty of being an outside sales rep, you go to a liquor store and you drive by an antique store, and, well I gotta stop. I have no choice.

"I got to know all the antique people; plus I went to all the flea markets. For years, I was up and out the door on Sunday at 4:30, 5 o'clock in the morning, for flea markets," he said.

“I've collected a lot of stuff over the years. I used to have a huge country-store collection — signs and tins and trays,” which he sold to Cracker Barrel in the '80s. “I've always been a collector at heart.”

On the beer side, first he collected all things Pabst. Then, "I discovered there were these really cool breweries that existed in the Quad-Cities," Wenthe said. "I started reading up, doing research, searching out artifacts.

"By being immersed in it for so many years, I kinda became the go-to guy for everybody. There's a lot of guys out there who have really nice collections, I could go to and say, 'That used to be mine.'”

He's concentrated on learning and collecting stuff about breweries up and down the Mississippi River, from Dubuque to Keokuk, and has sold off much of the collection, save Rock Island Brewing — which formed in the 1890s from the merger of Raible & Stengel, Huber Brewery and Atlantic. One of Wenthe's prized possessions is a huge 1892 Raible & Stengel stein, which he bought at an Iowa auction.

Of collecting, he enjoys the hunt. “It's cool to have the stuff, but it's just as much fun to find it.”

He runs a Facebook page, Quad Cities Brewing History, and occasionally gives talks on that history — including one (free to the public) this Wednesday at 6:30 p.m., at Galena Brewing Company, 1534 River Drive, Moline (which just opened earlier this year).

Wenthe started doing the presentations in 2008 at Front Street Brewery, Davenport. He belongs to several collectors clubs, including the National Association of Breweriana Advertising and the American Breweriana Association.

Part of the Potosi collection

Wenthe has gone to many conventions and festivals and loves the brewery museum in Potosi, Wis., 90 miles north of the Q-C. The National Brewery Museum — a joint venture between the Potosi Foundation and the American Breweriana Association — has an eclectic collection of beer bottles and cans, glasses, trays, coasters, advertising materials and other collectibles.

Wenthe had part of his collection there for a year and a half after it opened in 2008. The museum is in the historic Potosi Brewing Company building that operated from 1852 to 1972.

Breweries had to find a way to stay in business during Prohibition (1920-1933), but Rock Island struggled to survive even after its repeal, Wenthe said. Some resorted to selling ice cream using their refrigeration. Like Rock Island, most produced some kind of near-beer or soft drinks, he said.

Rock Island made sodas, but their main product was a cereal malt beverage called Lily, less than 1% alcohol. “The idea was, we'll still sell near-beer, but people can spike it with their homemade hooch or medicinal spirits," Wenthe said.

Lily gave up by the late '20s; the brewery closed, then reopened in 1934, but succumbed to pressures from the larger breweries, he said.

Wenthe has a sign for the last beer made in Rock Island, in 1939, “Rox” pale lager, shortly before they went out of business. "That sign is very rare because they only made the beer for one year. There's only been one other one ever found,” he said. “A lot of this stuff is one of a kind.”

The national companies (like Anheuser-Busch and Miller) got bigger and could afford to advertise, unlike smaller ones like in the Q-C. At one point, the U.S. only had about 70-some breweries, Wenthe said. "Now, we're up over 6,000 across the country."

Since the opening of Blue Cat and Front Street in the early '90s (and Rock Island Brewing Co., even though they don't make their own), Wenthe savors the exploding craft-beer scene. It was hard when he had to sell it, though.

"That was one of the things that led me to my retirement. There are just so many," he said. "As a sales rep, it became daunting to try to do justice to all of them. Because you want to be good and be fair, and do the right thing for everybody, but it became in my book, hard to be that guy.

"Plus, the retailers, the stores, bars and restaurants face the same dilemma. There's only so much we can carry," Wenthe said. "If you want two or three new beers in, you gotta take two or three beers out. How do you do that? I was getting frustrated with that situation.”

His last 10 years in the beer business, "it was like night and day, like somebody turned on a light switch," Wenthe said of unique craft beers. "People started looking for that. The pendulum swings so far in that direction — not only do I want something that isn't Budweiser; I want something I've never had. Once they buy it, they want something else they've never had. It's like an endless loop.”

"The beer drinker now is kind of like what I am now as a beer drinker – I just want to try the new stuff," Wenthe said. "That's the great thing about the Quad-City beer scene now is the diversity. There are these guys locally; I don't have to travel anymore to have great new beers. I can go to Wake Brewing; I can go to Radicle; across the river to Crawford.”

"The guy who drinks Budweiser or Bud Light every day is not going to experiment. They're loyal," he said. "The opposite is the craft person – what have you got that's new, that I've never had? They develop tastes for styles.”

“The post-Baby Boom generation was looking for something new and the birth of brew pubs really spurred the business I was in," Wenthe said. "The key for me was they had food and beer, and they were trying to do beers that were not like the big guys.”

"What I always found interesting, that's where you went to try a beer for the first time. I've never had stout, but you went there, and wow, it's really great," he said. "I'm gonna go to the supermarket and look for a stout.”

“That led people to experiment,” he said. “The stores in turn go, I've got customers asking for this.”

Wenthe and his wife Phyllis have two sons, who live in Ft. Worth, Tex., and Madison, Wis. “I'm pretty flexible. My wife is definitely a wine drinker,” Wenthe said.

“She tolerates it; she's a very tolerant person to put up with me all these years,” he said. “She liked it better when I was in the wine business.”

Galena was a prominent brewing town in the 19th century, once with nine breweries — the last commercial one was Galena Brewing Company, which operated from the end of the Prohibition until about 1938.

The current Galena Brewing opened there on Main Street in 2010, and the Moline location is its first outside Galena. “The coolest thing about Galena, is Jamaican Red Stripe, which is very popular, was originally brewed in Galena,” Wenthe said.

Ickes: Little girl lost in '07 has questions as adult

A 5-year-old Davenport girl who was dropped off by a school bus three miles from her home in 2007 now is a 20-year-old woman with questions.

Chabad Lubavitch of the Quad Cities will move into a permanent space at Heather Glen Crossing strip mall.

Davenport condemned their apartments, displacing renters. And it may do so again

After a few days of warm, sunny weather Old Man Winter is about to make an encore appearance in the Quad-Cities as colder air and a chance of …

An examination determined the remains belonged to a woman, between 25 and 45 years old, who was between 5-foot-2 and 5-foot-6, with ancestry characteristics of Caucasian/African-American.

An advertisement for Rock Island Brewing's last "Rox" beer, made in 1939.

Various samples of Quad-Cities beer bottles, ranging from 1800-1900 at the home of Mike Wenthe.