The amazing life of Davenport's Milton Howard. He was born free, but kidnapped into slavery. He escaped to serve in the Civil War and work at the Rock Island Arsenal for 56 years
Share this
{{featured_button_text}}
1 of 8 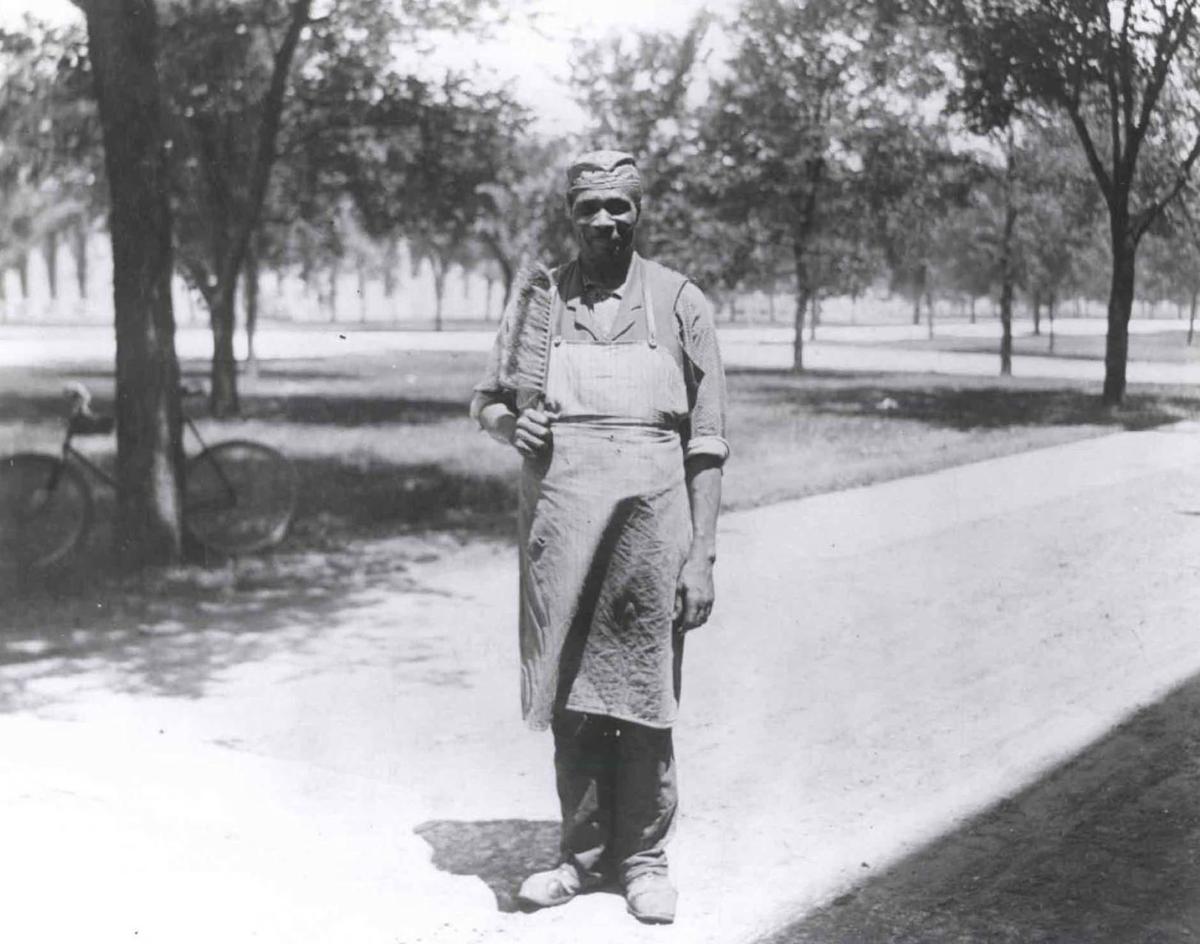 Milton Howard during his Arsenal days. 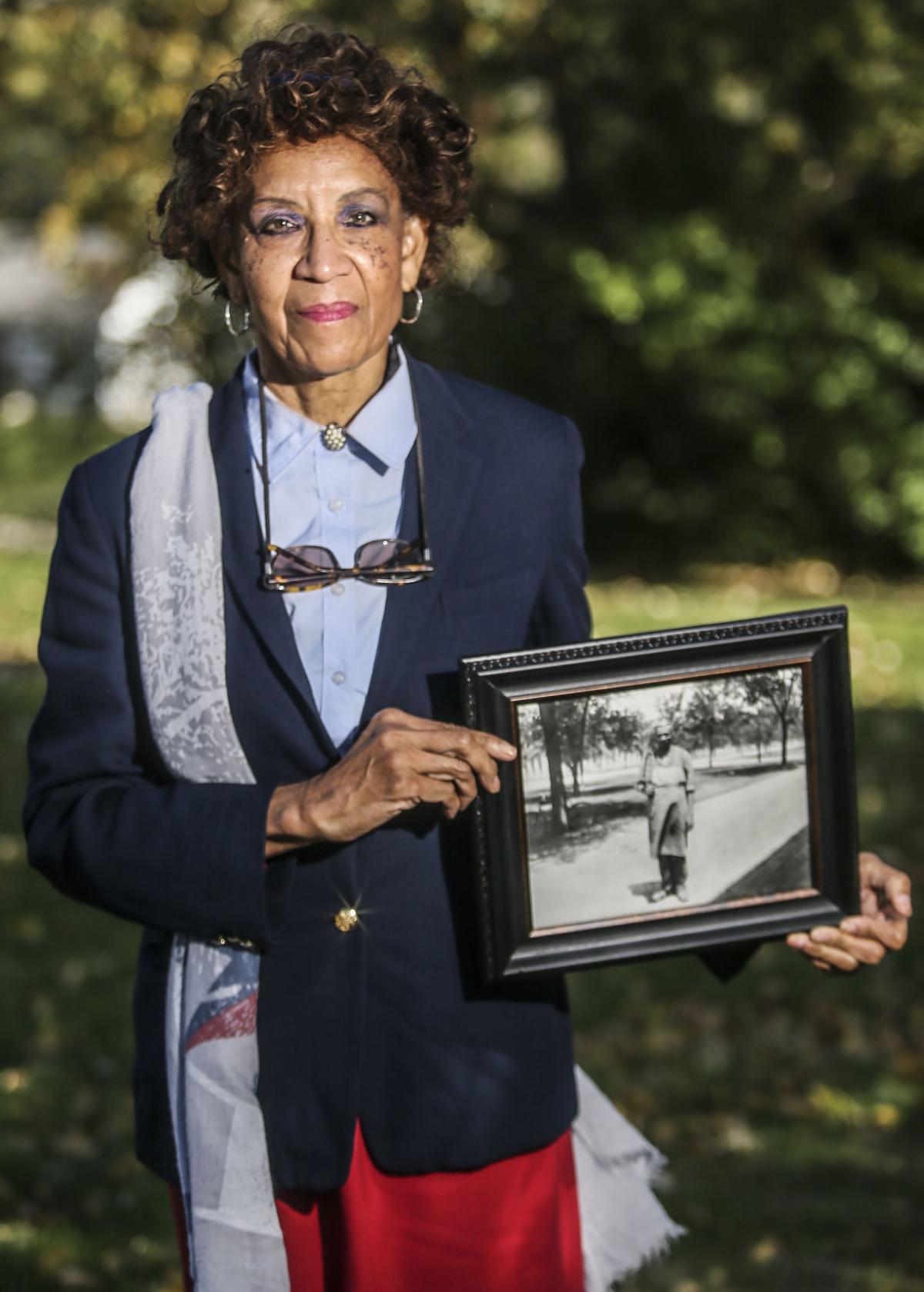 Karen Orozco Gutierrez holds a picture of her great-grandfather, Milton Howard, recently at some property he once owned on Judson St. in Davenport. 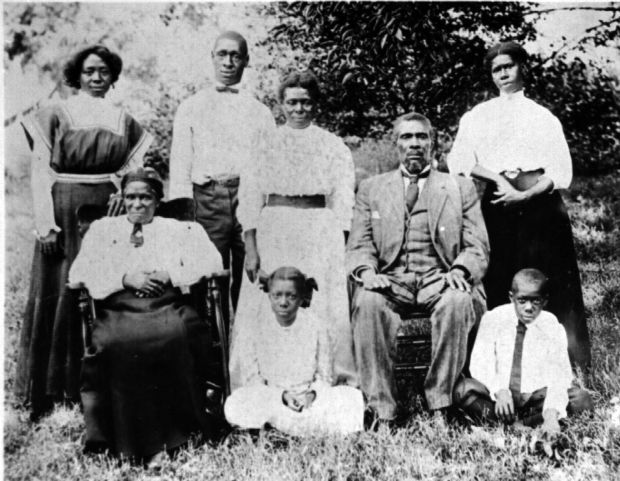 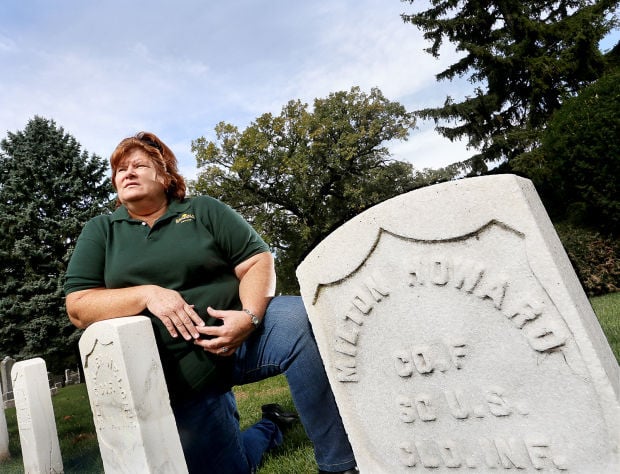 Deb Williams, the office manager at Oakdale Memorial Gardens in Davenport, kneels by the gravestone of Milton Howard, an escaped slave who served in the U.S. Army and later worked at The Arsenal for 56 years.  Williams helped some student researchers from Nebraska learn the story behind Howard and other former slaves buried at Oakdale, resulting in it being placed on a national registry. 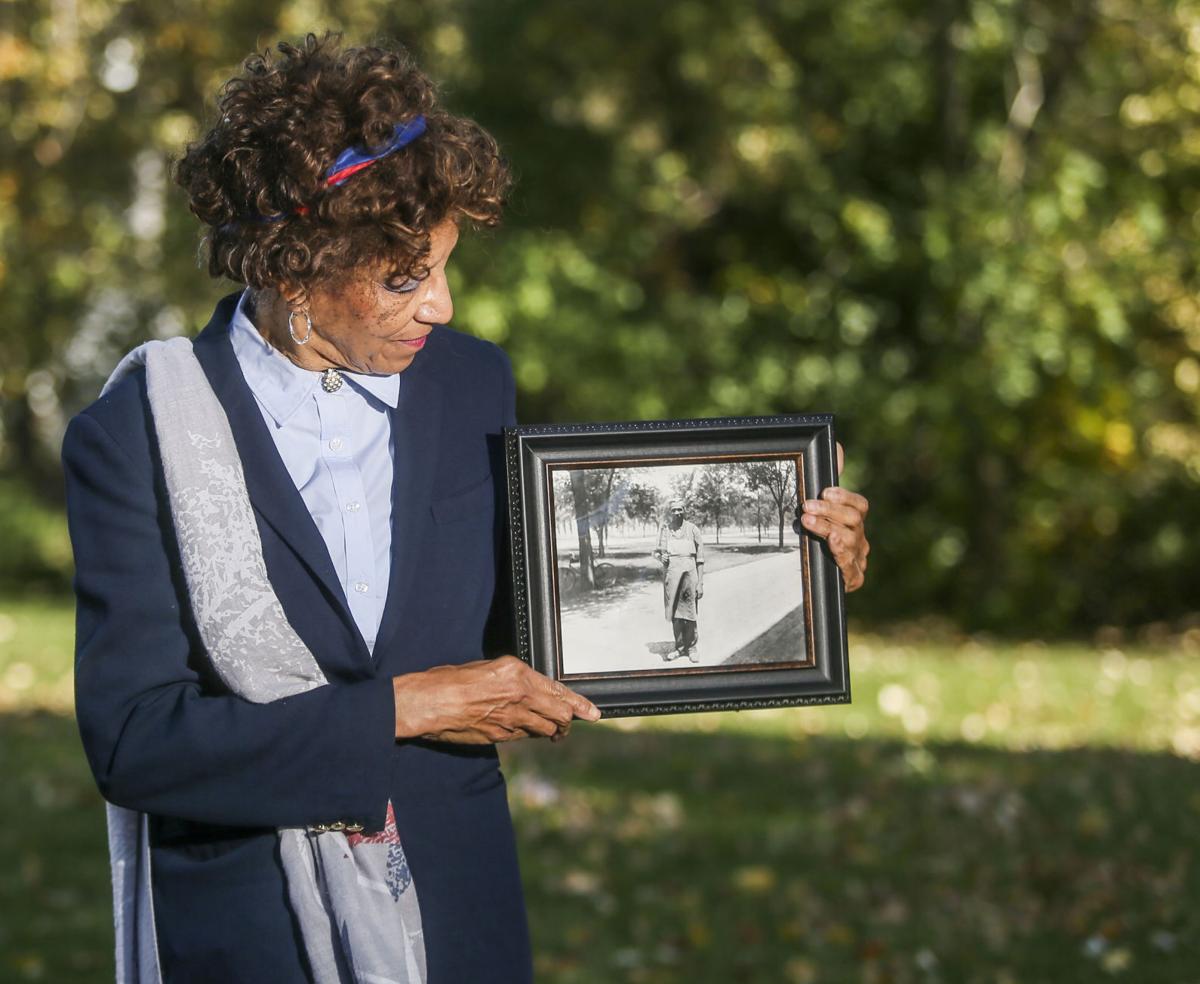 Karen Orozco Gutierrez holds a picture of her great grandfather, Milton Howard, rcecently on some property he once owned on Judson St. in Davenport. 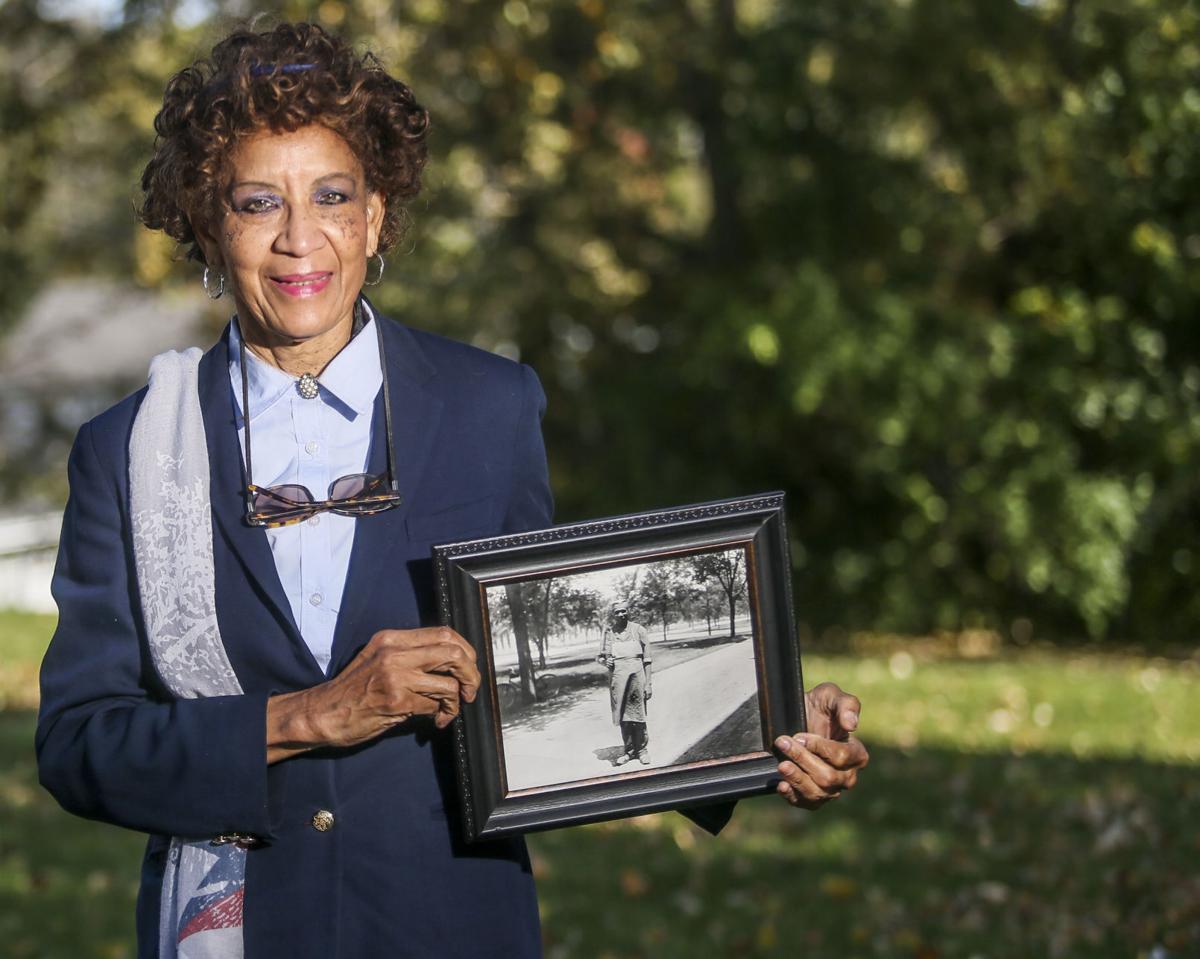 Karen Orozco Gutierrez holds a picture of her great grandfather, Milton Howard, a Quad-City man who was born free and kidnapped into slavery, escaped to serve in the Civil War and later was a 56 year employee of the Arsenal. 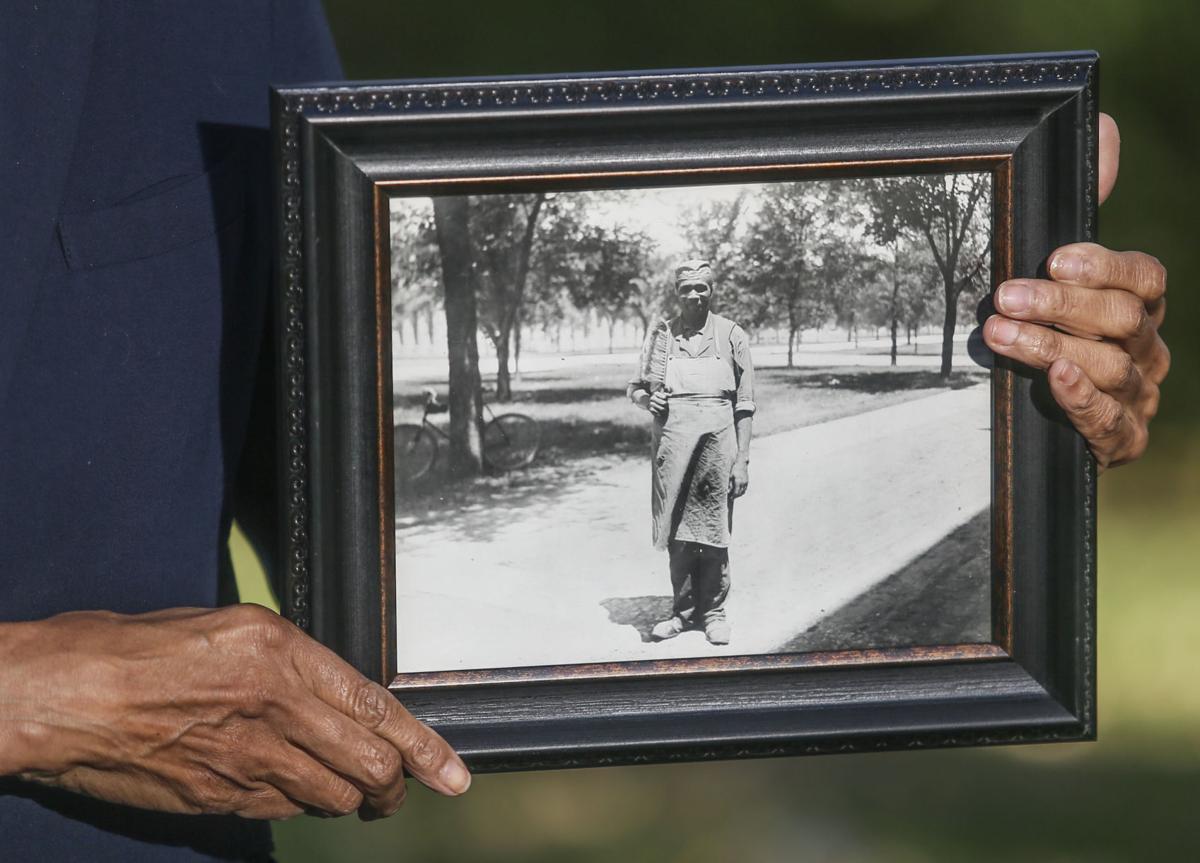 Karen Orozco Gutierrez holds a picture of her great grandfather, Milton Howard, recently on some property he once owned on Judson St. in Davenport.

No look at race in the Quad-Cities is complete without the story of one-time free infant; one-time enslaved person; one-time escapee who was also a Civil War veteran; longtime multi-lingual Arsenal employee, minister and local celebrity — Milton Howard.

Howard worked at the Rock Island Arsenal for well over 50 years, earning nicknames such as “the Deacon,” and “the Linguist,” the latter because he spoke English, German and French and dabbled in Italian, Spanish and Gaelic.

“He was kidnapped in Muscatine as an infant, is recorded as a slave in Montgomery, Alabama, at age 2, later escaped as a child and returned north but could not find his family,” said his great-granddaughter, Karen Orozco Gutierrez of Davenport, the daughter of Glenn Perkins, Howard's grandson; and the granddaughter of Pearl Howard Perkins, Howard's daughter.

“He paved the way for all of us," Gutierrez said.

She attributes his celebrity status to his story. He was born in Muscatine around 1852.

"They were kidnapped one night around 1852, when he was an infant," she said. "They were taken south and sold into slavery. He himself was born free, but he was a slave. This happened when he was a child, Then he got separated from his family, and he had several slave holders. He escaped with a group of people before the Civil War. When the Civil War broke out, he was still a child at this time. He made his way back north. One of the Union soldiers took responsibility for him, brought him back north and took him back to Muscatine."

At that point, still a young boy, he joined the United States Colored Troops, Iowa regiment and went to war.

"I am (quite proud of him),” Gutierrez said. “It was a brutal time period, when he was born and raised, when he lived for him — a person of color. If they had been free and not kidnapped, his life would have been a lot different. Our lives would have all been different. All the generations, it’s affected us one way or the other.”

Gutierrez enjoys history and genealogy and took a trip to Montgomery, Alabama, to learn more about her great-grandfather. She befriended a co-researcher from the South, Karen Banks, whose kin had been slave owners.

Banks turned the trip into an article in The Smithsonian magazine.

Walking the areas Howard walked as a slave gave her a deep appreciation of his life.

“He persevered. He never quit," Gutierrez said. "He had a positive outlook on life. I am sure he missed his family terribly, but somehow he was able to face forward every day and did the best that he could. He lived to be about 77, which is pretty good.”

She doesn’t even blame the times he lived in for holding him back at the Arsenal.

"He was injured in the military when he was a soldier and he was crippled," Gutierrez said. "So that’s the reason why he couldn't really do the hard work like farm work. He did mostly light industrial work. They had him digging confederate graves toward the end there. He just had light work. He had kind of like buckshot (from a wound in the Civil War) that he carried around for the rest of his life. That’s not unusual (for that time).”

George Eaton, Arsenal historian, said Howard took shrapnel to his knees and legs, and had a limp the rest of his life.

Howard the linguist and preacher

Howard was a house servant in the South, and he picked up French that way.

“He learned French from his first owners ... their family had been French Huguenots (French Protestants). I think they came from North Carolina and Alabama," Gutierrez said. "So he learned French there when he was a child. And he learned English there.

“When he came back up north, Davenport had a large immigrant population with the Germans, and the Irish, so we definitely know he knew German, and probably several other language," she said. "German and French besides English for sure.”

Gutierrez believes he knew Italian and Gaelic, too, and maybe even Spanish.

“He did have some Hispanic neighbors,” she said. “He probably could speak a little Spanish because that’s close to English in a way."

Among his nicknames was The Deacon. It likely sprung from all the churches he preached at, Gutierrez said. But Milton Howard only once had his own church. He read and wrote English at an elementary level, Gutierrez said, and that probably held him back.

She gets most of her information from newspapers.com and recalling an uncle she spoke with long ago who knew him.

“They always talked about him,” she said of her family. “One of my uncles actually knew him, so we heard firsthand some of the things that he said. But not a lot was passed down. There’s some things we read. He was in the press a lot.”

She praises her great-grandfather in ways that make you think the whole Quad-Cities should join in.

“We all got opportunities that we wouldn't have had probably if Milton Howard hadn’t paved the way for us,” Gutierrez said, referring to her family. “It was really hard for him. I can’t say that enough. Just how difficult (it was)," she said.

"Just for one example, he moved 25 times in his lifetime.”

Watch now: Henry Hall in his own words

Watch now: Ragan Ross in her own words

Watch now: David Robinson in his own words

Watch now: Victoria Carey in her own words

Watch now: Rev. Grimes in his own words

In Their Own Words, Ragan Ross: 'I am an advocate'

I am from Davenport and graduated from Davenport Central High School and Iowa State University. Going to school of course, obviously it is mostly students who are not of color. I have always been one or two persons of color in class.

It’s challenging at times being an African-American woman

In Their Own Words, David Robinson: 'You have to sacrifice something'

Growing up in Rock Island as a black person was tough. There was a lot of gang activity in the community at that time. (1980s and 1990s.) Those years were learning. I learned a lot. Being a young man at that point in time, I didn't really understand a whole lot. I guess you could say profiled back then, but me being a young man back then, I didn't really know it. But now I look back at the things that had happened to me and it was just different. Me driving down the street in a car, and I get pulled over and somebody else didn’t.

In Their Own Words, De Witt Pollard — Shaped, not scarred

In Their Own Words, Chelsea Ward: 'My diversity is a plus'

I am 25 years old. I currently live in Davenport.

In Their Own Words, Victoria Carey: 'To get respect, you have to give it'

I have prior military experience, so I am comfortable with being around diversity. So far as being an African-American in the Quad-Cities, I a…

This week, we present Black in the Quad-Cities, a special series dedicated to lifting Black voices and shining a light on the challenges -- and opportunities -- faced by local people of color. Watch for special coverage in each edition, join the conversation on social media, and follow the series online at qctimes.com and qconline.com. Send ideas to newsroom@qctimes.com or press@qconline.com.

A woman is dead and three others are injured after a single-vehicle crash on Interstate 280, Davenport police said.

The Mercer County Sheriff's Department confirmed Sunday that Taegan Randolph, a 20-year-old Matherville, Ill., woman has been located and is safe.

Two Davenport men have been charged in connection with a shooting incident that occurred late Friday in the 1800 block of W. 7th St., Davenpor…

Davenport police are investigating a shooting at NorthPark Mall that occurred at 11:41 a.m. Sunday.

Milton Howard during his Arsenal days.

Karen Orozco Gutierrez holds a picture of her great-grandfather, Milton Howard, recently at some property he once owned on Judson St. in Davenport.

Deb Williams, the office manager at Oakdale Memorial Gardens in Davenport, kneels by the gravestone of Milton Howard, an escaped slave who served in the U.S. Army and later worked at The Arsenal for 56 years.  Williams helped some student researchers from Nebraska learn the story behind Howard and other former slaves buried at Oakdale, resulting in it being placed on a national registry.

Karen Orozco Gutierrez holds a picture of her great grandfather, Milton Howard, rcecently on some property he once owned on Judson St. in Davenport.

Karen Orozco Gutierrez holds a picture of her great grandfather, Milton Howard, a Quad-City man who was born free and kidnapped into slavery, escaped to serve in the Civil War and later was a 56 year employee of the Arsenal.

Karen Orozco Gutierrez holds a picture of her great grandfather, Milton Howard, recently on some property he once owned on Judson St. in Davenport.