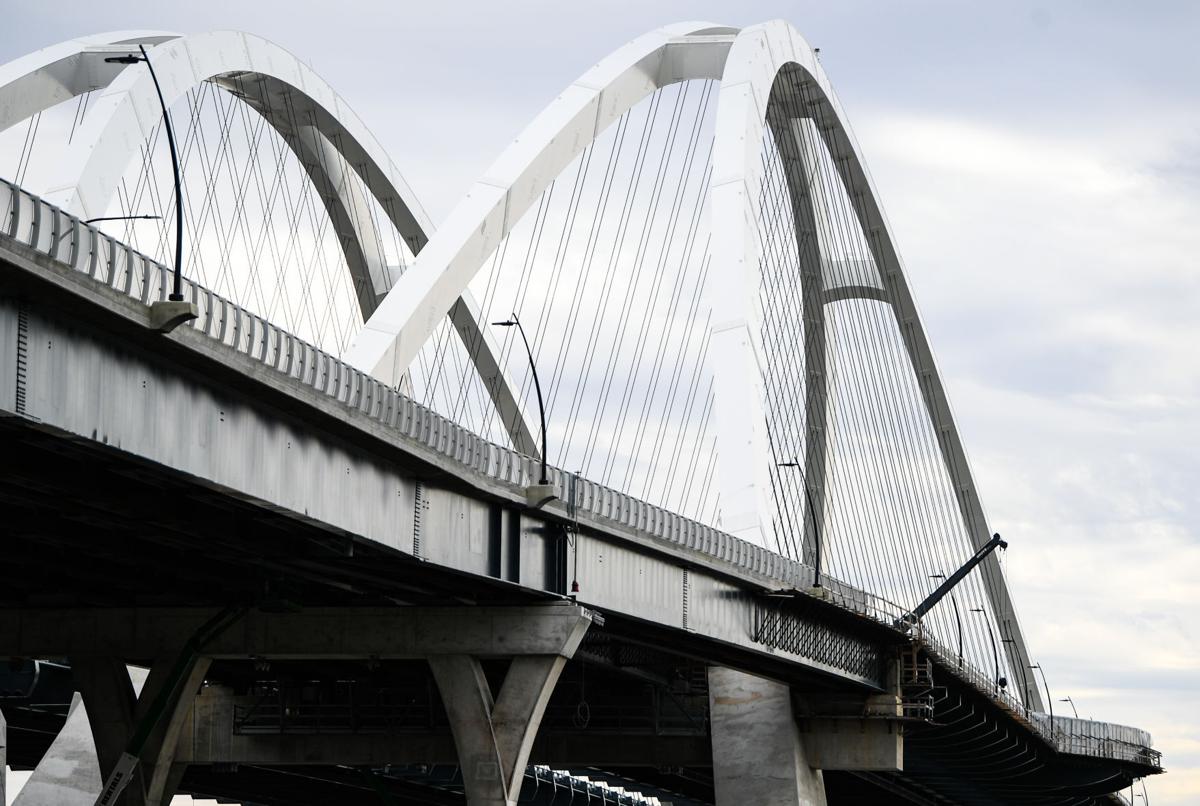 The eastbound section of the I-74 bridge is visible from Leach Park, Nov. 15, 2021, in Bettendorf. The bridge is nearing completion, a year behind schedule and $74.5 million over budget. 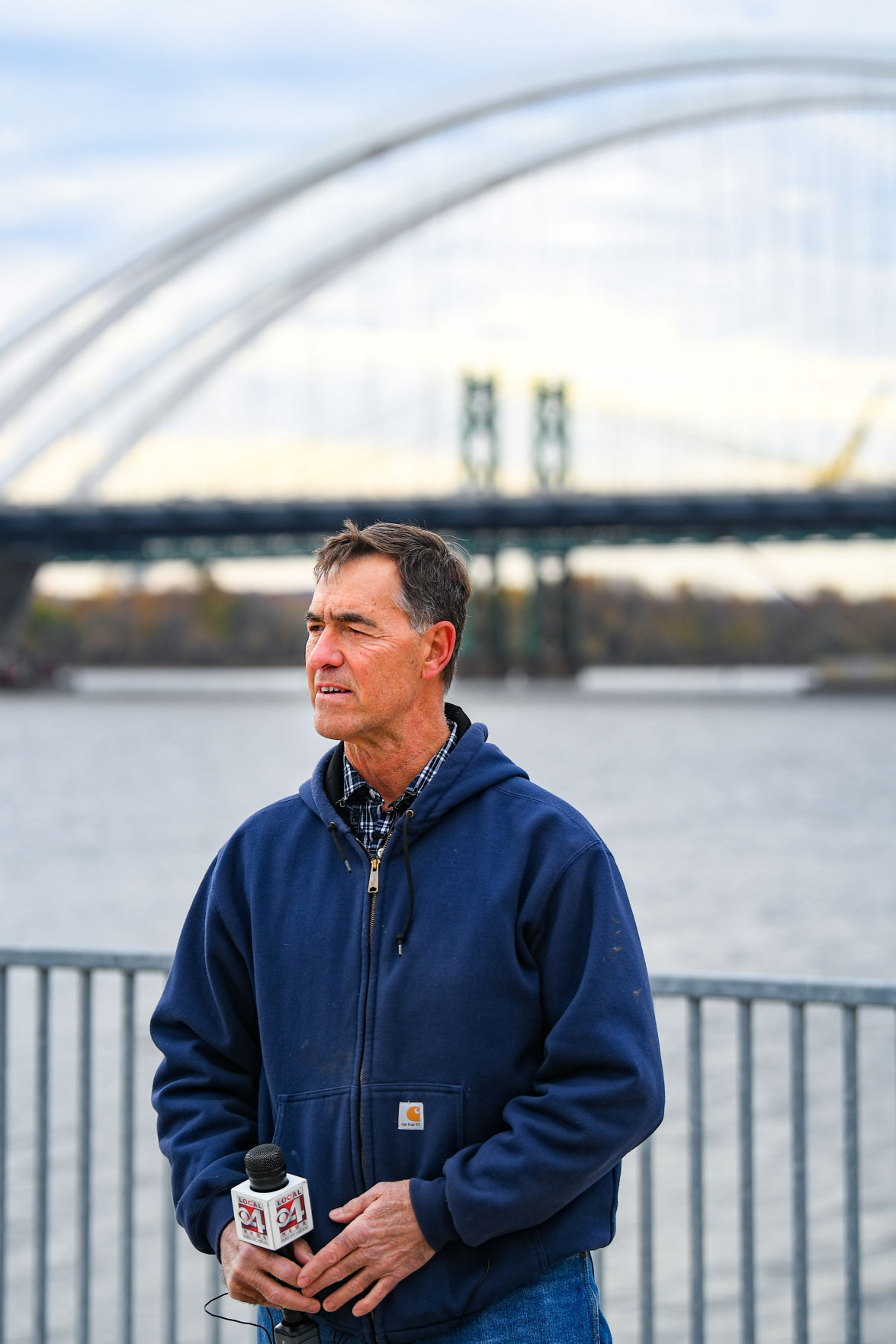 I-74 Corridor Manager George Ryan speaks during a press conference along the Bettendorf Riverfront Bike Path Monday, Nov. 15, 2021, in Bettendorf. The new Illinois-bound I-74 bridge is to open early next month, but the public is invited for a close-up look before traffic is permitted.

The new twin spans of the I-74 bridge are being delivered more than a year late and $74 million over bid.

A "public celebration" is planned for Dec. 1, giving the community walk-on access to the new Illinois-bound span. It will open to traffic in the days following the event, DOT officials said early this week.

Wisconsin-based Lunda Construction was the low bidder for the bridge portion of the Interstate 74 expansions in 2017, beating out four other contractors with a low bid of $322 million.

The Iowa Department of Transportation, DOT, has authorized up to approximately $74.5 million in contract modifications for the bridges, officials said, pushing the cost to $396 million.

Three of the other four bids were at least $20 million under current costs.

Much of the delay occurred during the spring and summer of 2019, when Lunda and the DOT disagreed over the "constructibility" of the arches as they were designed. For many months, little or no arch work was performed.

Despite delays, first span of new Interstate 74 bridge on target to be finished later this year

Though progress has slowed again, the Iowa-bound span of the new Interstate 74 bridge still …

In a statement in the fall of 2019, Lunda acknowledged it, "has encountered issues with the design; specifically the geometry of the arch and tolerances utilized in the design."

Tolerances refer to the allowable variations from the arch specifications, which the DOT argued were proper.

Mark Lowe was director of the Iowa DOT in the fall of 2019, and he visited Bettendorf during the dispute.

"We feel strongly we had a good plan," Lowe said of the bridge design. "Our good-faith dispute with them (is that) it's their responsibility. The means, method and sequence (of building it) is up to the contractor."

Rather, he said, it was Lunda's position that, "It's not buildable at this price. It's a dispute over compensation."

Lowe was asked whether the contractor had used delays as "leverage" to get the state to pay more, given the company was aware of the specifications when the job was bid.

"I wouldn't say it that way," he responded. "I wouldn't term that extortion. At the same time, we must resolve (conflicts), and work must continue."

He said at the time that Lunda had sought some contract modifications the DOT refused to permit.

This week, Ryan reiterated that the state keeps close tabs on all requests for bid extensions.

"Iowa DOT extensively reviews all contract modification requests and all payments are contingent upon contractor performance and agreed-upon requirements," he wrote in an email Tuesday.

The DOT's initial estimate for building the twin spans was $386 million. In 2019, Lowe said he expected any overages to remain within the original estimate, which now is exceeded by about $10 million.

Asked whether disputes over the bridge build are typical or atypical of a large state construction contract, Lowe warned his response could "sound weasely." He said the project has been both routine and out-of-the-routine, because the project is especially complex.

Asked whether the DOT regrets having chosen Lunda to build the bridge, Lowe replied: "I wouldn't say that. I don't think that would be a fair way for us to look at it. We don't know what could've happened with another contractor."

Photos: Construction Continues on the new I-74 Bridge

The eastbound section of the I-74 bridge is visible from Leach Park, Nov. 15, 2021, in Bettendorf. The bridge is nearing completion, a year behind schedule and $74.5 million over budget.

I-74 Corridor Manager George Ryan speaks during a press conference along the Bettendorf Riverfront Bike Path Monday, Nov. 15, 2021, in Bettendorf. The new Illinois-bound I-74 bridge is to open early next month, but the public is invited for a close-up look before traffic is permitted.