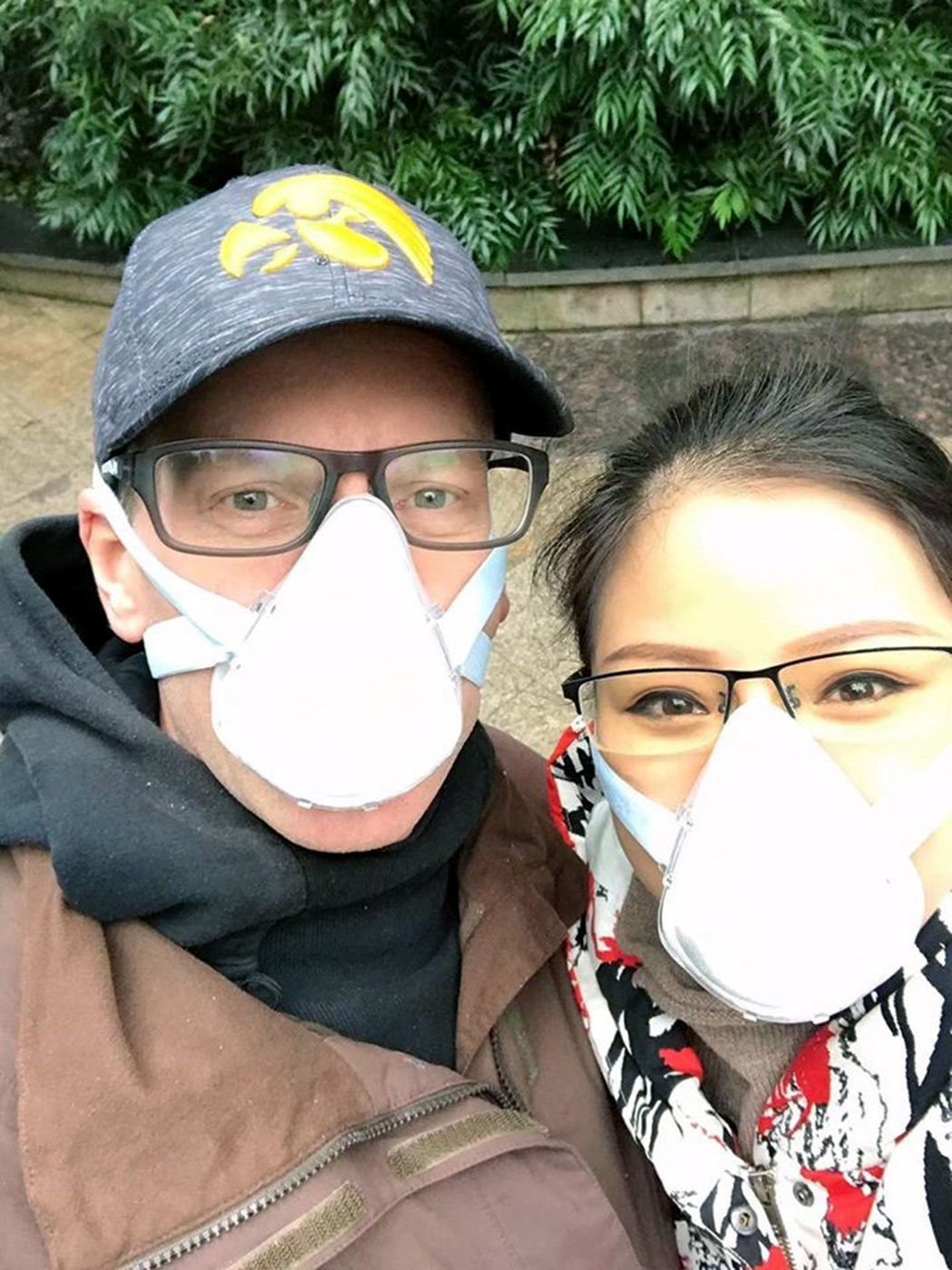 Rock Island native Michael Standaert and his wife, Jing, wear masks to protect themselves from the coronavirus. They have been quarantined at her mother's apartment in the county of Dazhu in China. 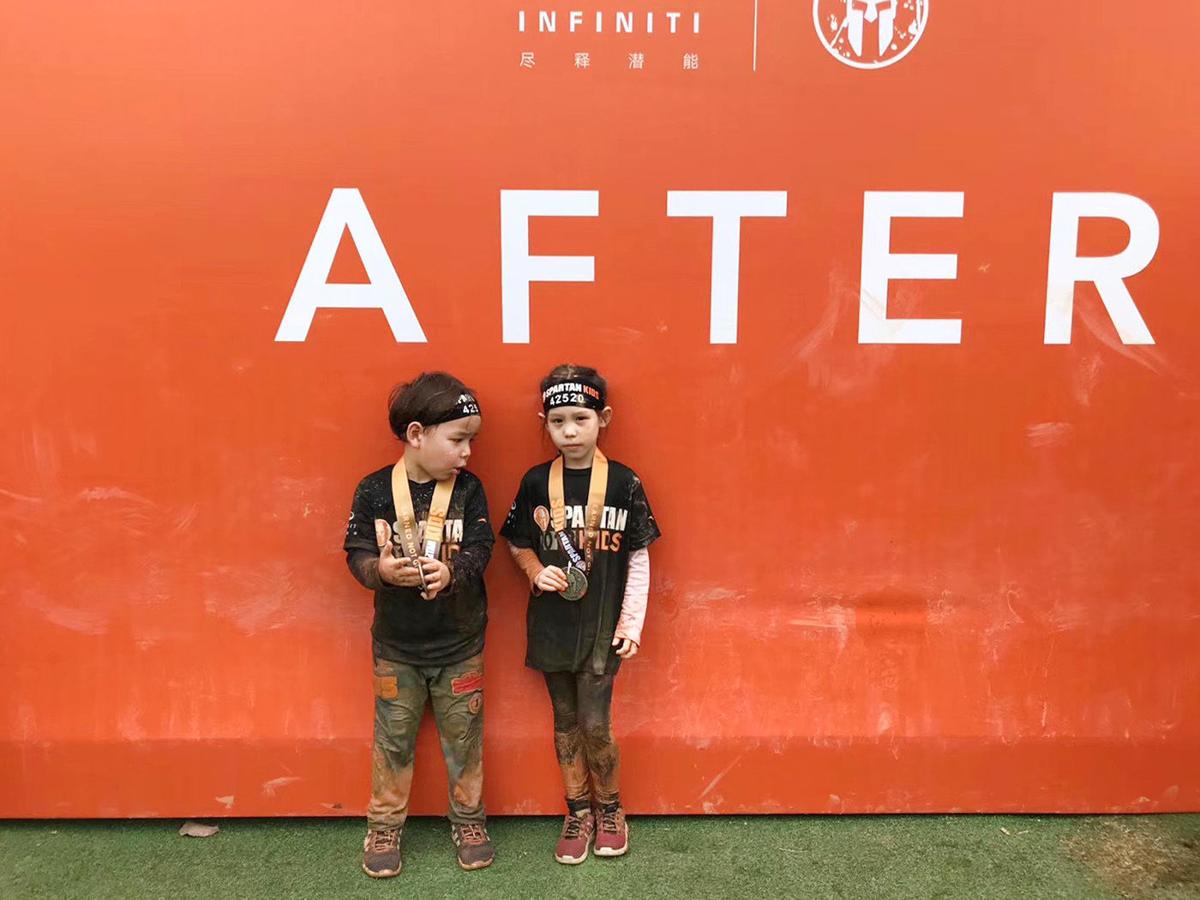 Sebastian Standaert, left, and Simone Standaert show off their medals after an obstacle course race in December in Shenzhen, China, shortly before the coronavirus hit. 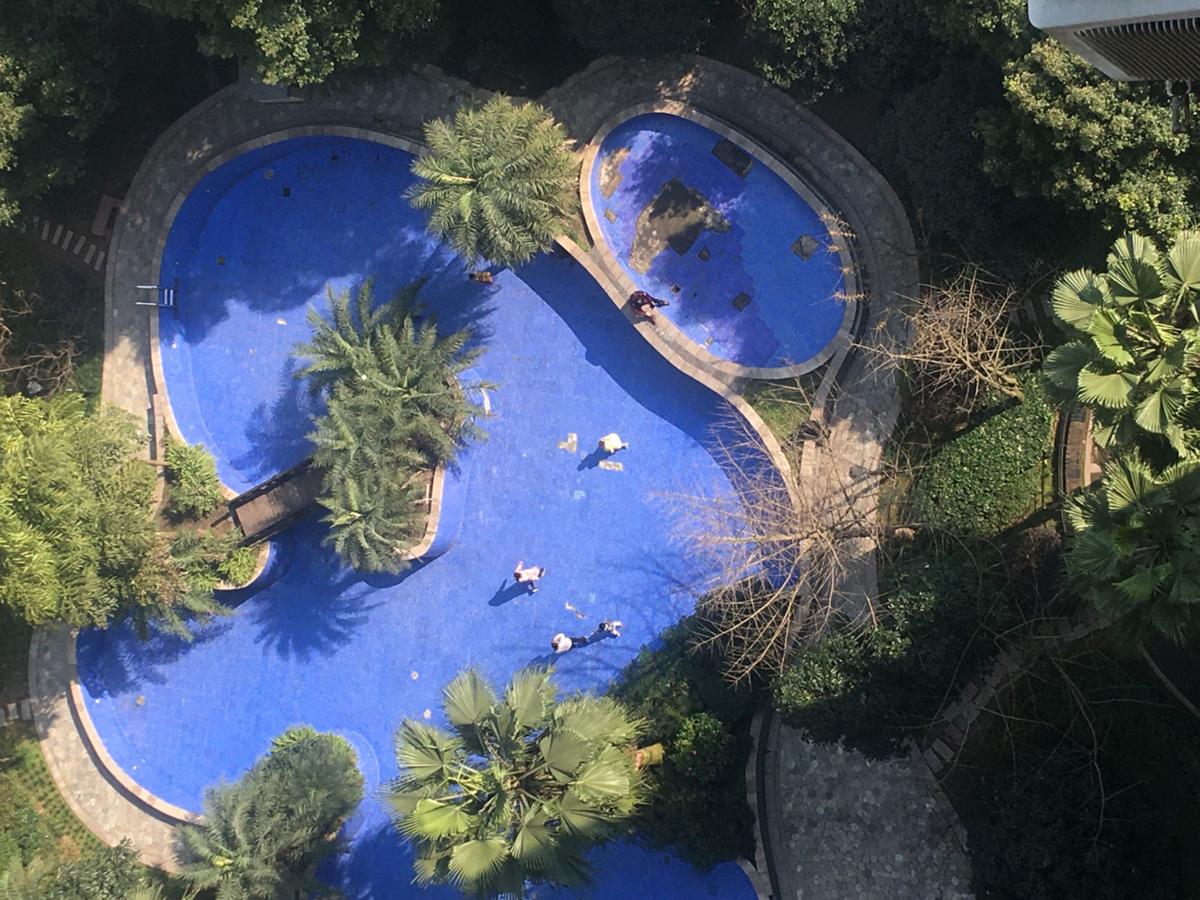 The children of Rock Island native Michael Standaert play in an empty pool in their Shenzen, China, compound, where they are quarantined because of the coronavirus. They are allowed to walk about the compound, but only one member of the family can go out the gate once every three days.

Life was running smoothly for Rock Island native Michael Standaert, his wife, Jing, and their two children, Simone, 7, and Sebastian, 5.

Unite Quad Cities is raising money to help Quad-City people and businesses affected by the new coronavirus. As part of the day-long campaign, the Quad-City Times and Moline Dispatch-Argus are showcasing stories that show how the pandemic has impacted us.

The Standaerts, who live in the Chinese city of Shenzhen, were prepping for the Jan. 25 celebration of the Chinese New Year.

Then life went off the rails.

While they were visiting the county of Dazhu in the Sichuan Province — Jing Standaert's native area — several cases of the deadly coronavirus were reported from the city of Wuhan and the Hubei Province.

Dazhu, like most of China, went into lockdown in an attempt to slow the spread of the flu-like virus, which causes the disease COVID-19.

"It was around the 22nd (of January)," Michael Standaert wrote in an email response to questions about what life is like at the epicenter of the coronavirus outbreak.

"That's about the same time that the city of Wuhan, sometimes compared to Chicago since it is a major east-west/north-south transport hub and industrial area, and Hubei Province reported the outbreak," he added.

A freelance journalist for Bloomberg Industry Group, Standaert found himself and his family at the hub of a worldwide health situation that continues to worsen as the coronavirus spreads globally.

Standaert works as a freelancer for Bloomberg, but he also writes for other news outlets, and the virus became a topic of his stories.

"Did eight days of pretty heavy coverage for The Guardian, and since then some sporadic work for them, several stories with Al Jazeera, and a few with Bloomberg Environment," wrote Standaert, who in 2009 was hired as a correspondent for an outlet called the Bureau of National Affairs, which was later bought by Bloomberg. It is now known as Bloomberg Industry Group.

An Alleman High School and University of Iowa graduate, Standaert earned a master's degree in journalism from Cardiff University in Cardiff, Wales. In 2007, he moved to China and began chasing his dream of working as a foreign correspondent.

In quarantine for a month

Since the outbreak, life in China has all but come to a standstill. The government has limited travel in all provinces as well as day-to-day foot travel. The Standaerts have been confined to Jing's mother's apartment — which is part of a compound of several apartments — for a month.

"Once things started to look bad, around Jan. 24, we canceled the celebrations," Standaert wrote. "Usually, if we come out here for the lunar holiday, each day is a bit different. You'd eat at home the first day with just the family at the house; the next day a bunch of relatives would come over for something like a big Thanksgiving feast. The following day would be going out to my father-in-law's or mother-in-law's hometown, in the rural areas, to visit their family graves and also their other relatives for another round of eating."

All that has been replaced with confinement. The weather has been cold and rainy; the apartment has no central heat; and the family is struggling to find a space to exercise. Standaert's family of four, his brother-in-law and his wife and their two kids, and his mother-in-law are sharing a three-bedroom apartment, and outside movement is restricted.

"I would roll out of bed and start working — from 7 a.m. and go to 7 p.m. —then eat and wrap any questions and go to bed and try to keep warm. Electric blankets and portable heaters only go so far, though.

"It has only been in the past week that we've had lockdown orders here. We were told that only one of us could go out every three days, so that's been my wife's mom so she can get food and other supplies."

Officials delayed action for too long

News that a virus had taken hold in Wuhan reached Standaert as early as Dec. 31, 2019, he said. An email check among colleagues confirmed it. He said Chinese health officials waited too long to get out in front of the coronavirus.

"That was around the same time they (the Chinese government) silenced several doctors for speaking out about it,'' Standaert wrote. "I remember seeing a state-run media story on Jan. 1 saying that this was 'just a rumor.'

"I kept pretty close tabs on things for those next two weeks,'' he added. "I thought it was worse than what they were saying, but there never seemed a sense of urgency and no travel restrictions in that crucial period when everyone gets on the road and travels for Chinese New Year.''

Despite the outbreak, Standaert said his family is healthy and has done a great job of making the best of a bad situation.

"The kids have been great," he wrote. "A lot of television, though. I've done some classes with them to work on their English. My two kids speak perfectly fine, but I try to do as much as I can with their English, especially now trying to get their reading and writing down solid. We'll eventually go to the United States at some point, probably for middle school and up.

"The kids are still out of school. Simone had some online classes. ... Schools are supposed to start around March. 2 now, but I'm expecting that to be delayed until at least mid-March.  The outbreak will likely die off by the end of April.''

When the Standaerts receive government permission, they will return to Shenzhen, an area that has transformed from big manufacturing to high-tech in less than a decade. It is referred to as China's Silicon Valley, Standaert said.

"It will be great, because we've got some things we need to do there and we're getting stir-crazy here," he wrote. "The hospitals in Shenzhen are good and not overloaded, so pretty safe there. Shenzhen has had a lot of recoveries and no deaths. We're pretty secure about going back there. The way back should be better, but we are expecting a lot of hassles with roadblocks and temperature checks."

He said the health scare won't derail his life and his family's life in China.

"I don't want to change careers,'' Standaert said. "This is what I've always wanted to do. Actually wish I could have gotten out on the ground to do some coverage during this time, but didn't want to risk contaminating the family."

To donate to Unite Quad Cities, visit unitequadcities.org or text UNITEQC (must be all caps) to 41444.

One month after a boat crash on the Mississippi River at LeClaire that killed two people, the Iowa DNR still is investigating what happened.

'Major accomplishment' on new I-74 bridge

The driving surface for the new Iowa-bound span of the I-74 bridge is a wrap, but that doesn't mean the span is ready to open.

An Iowa City couple were the first confirmed cases of COVID-19 in Iowa. Six months later, they're angry Iowa isn't doing more to stop the spread of the virus.

As of this past week, the COVID-19 pandemic has stretched on for six months in Iowa, infecting thousands and upending everyday life for many a…

Construction has begun on two new, 5-story buildings in downtown Davenport that will change the city's skyline, and plans are in the works for…

MACOMB, Ill. — The WIU student suspected of shooting his roommate is in custody in Chicago.

A Davenport doctor was disciplined. She was illegally prescribing drugs to another doctor — her co-worker/romantic partner.

A Davenport doctor's recent disciplinary action by the Iowa Board of Medicine is revealing another doctor's struggles.

Rock Island native Michael Standaert and his wife, Jing, wear masks to protect themselves from the coronavirus. They have been quarantined at her mother's apartment in the county of Dazhu in China.

Sebastian Standaert, left, and Simone Standaert show off their medals after an obstacle course race in December in Shenzhen, China, shortly before the coronavirus hit.

The children of Rock Island native Michael Standaert play in an empty pool in their Shenzen, China, compound, where they are quarantined because of the coronavirus. They are allowed to walk about the compound, but only one member of the family can go out the gate once every three days.