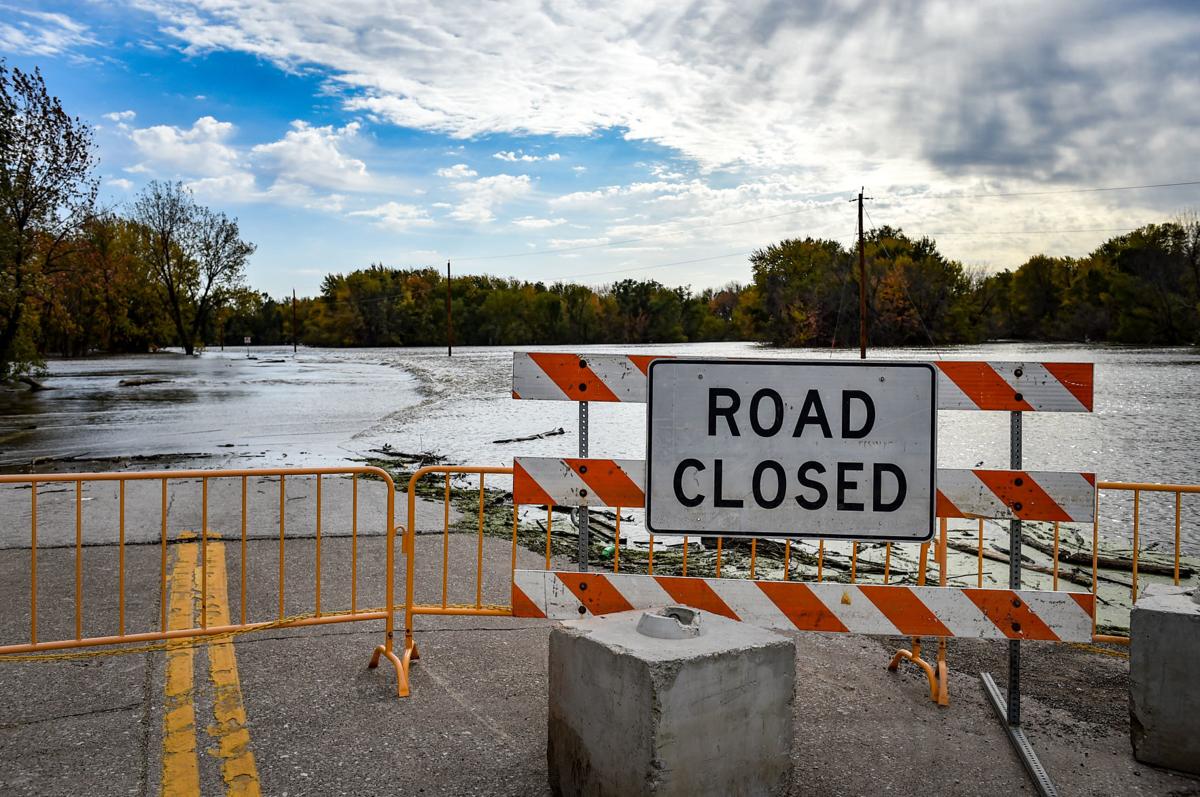 Floodwaters consume most of Credit Island Road on Tuesday in Davenport. 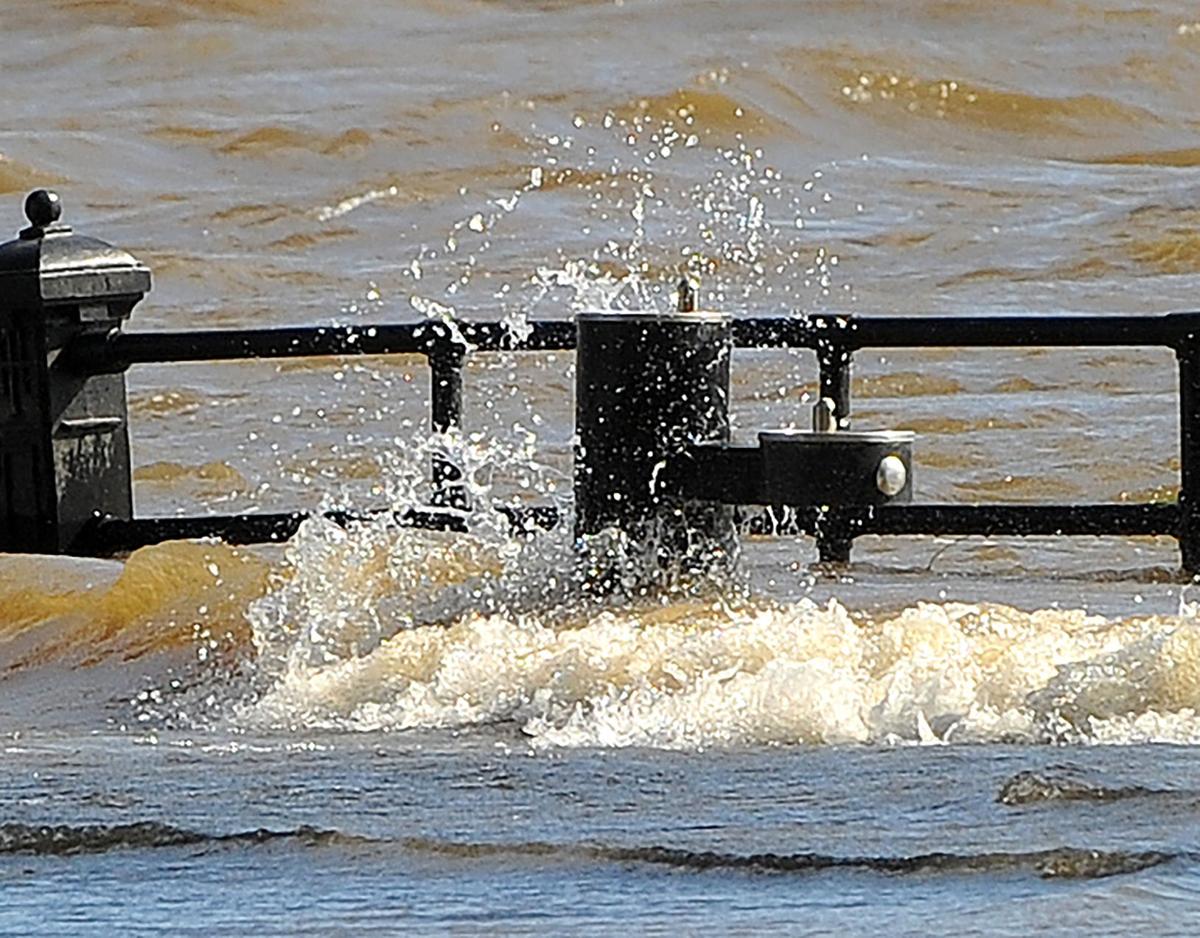 Looking like high tide on an ocean, floodwaters driven by high winds crash into a drinking fountain along the Davenport riverfront on Saturday. 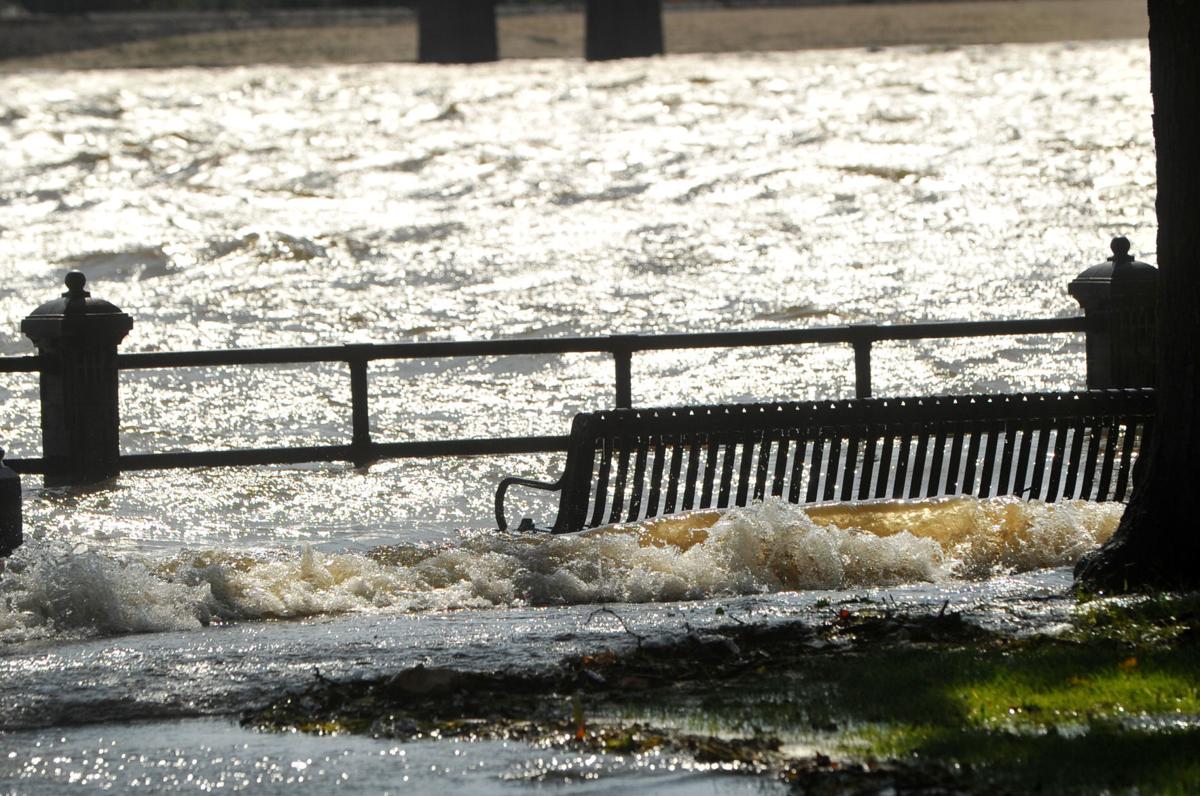 Looking like high tide on an ocean, floodwaters driven by high winds crash into a park bench along the Davenport levee on Saturday. 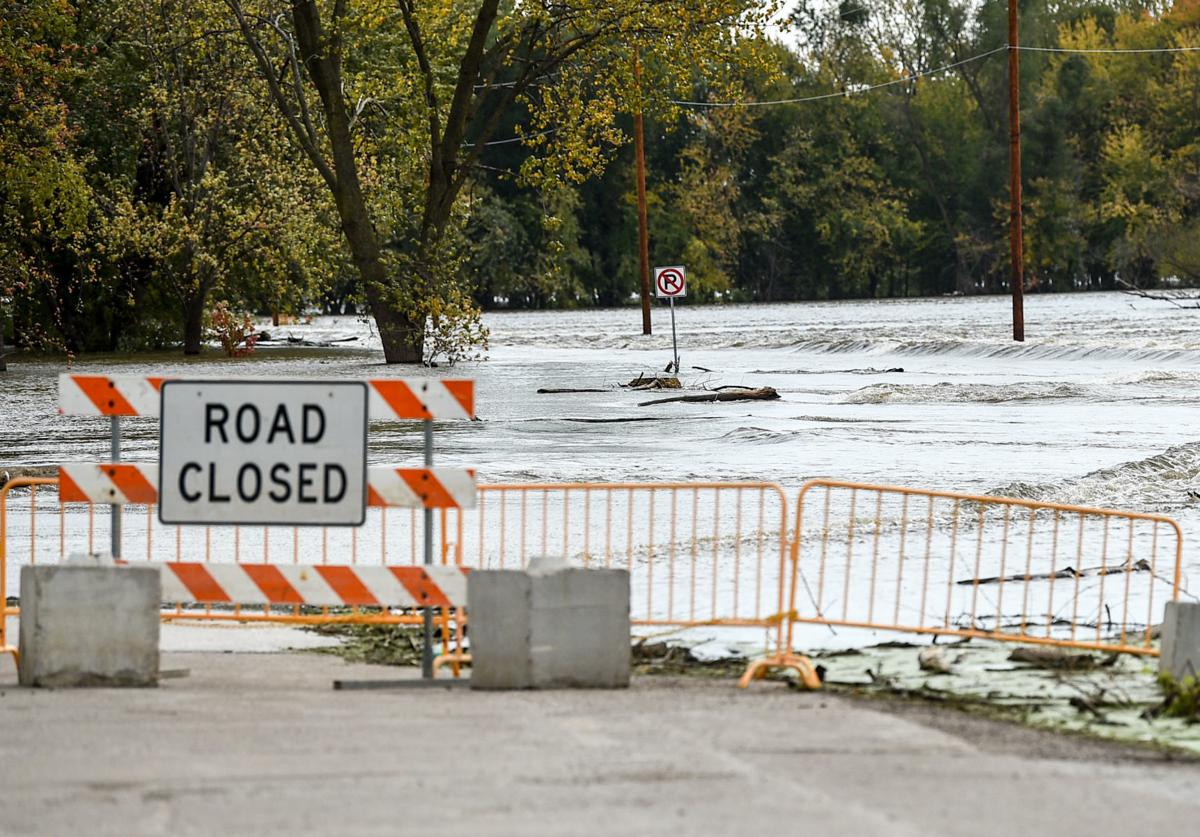 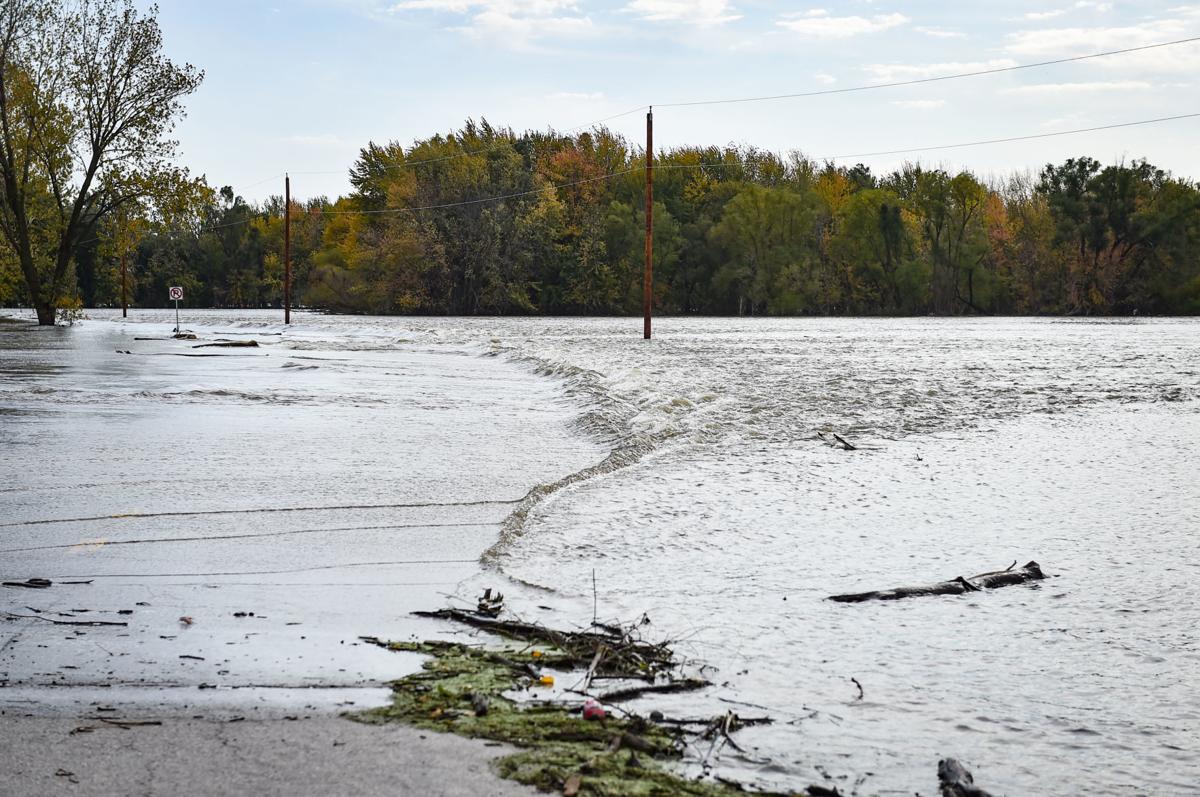 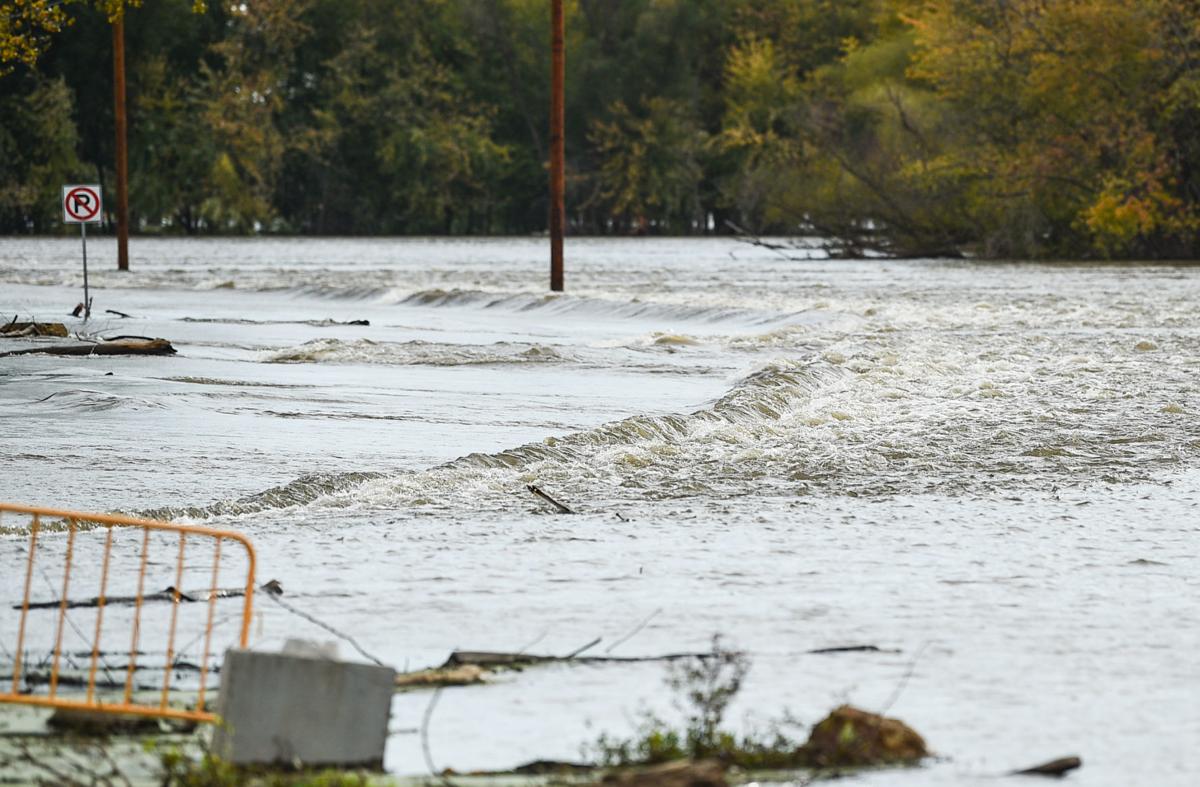 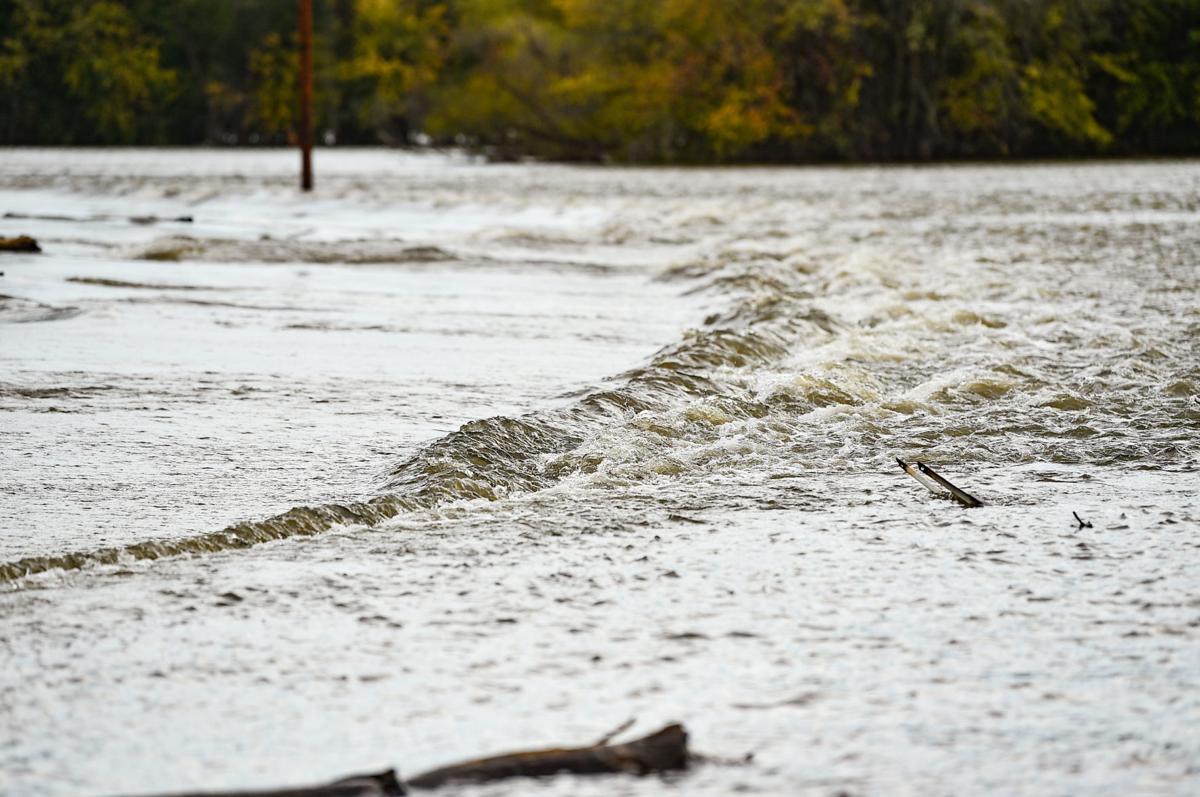 The final numbers won't be available until the end of the year, but Davenport's current calculations show the cost of fighting and cleaning up after this year's floods was "conservatively" $3.5 million.

City staff has been preparing final numbers to submit to the Federal Emergency Management Agency, FEMA, for reimbursement of some costs.

"Costs related to employee labor, overtime, materials, loss replacement, contract work and equipment depreciation that are known are conservatively $3.5 million," Davenport Public Works Director Nicole Gleason wrote in an email Tuesday. "... Some calculations as far as amount that can be claimed for vehicle depreciation, etc., are still being worked on, which is why the number is approximate."

Several high-dollar city vehicles had to be abandoned in floodwater during the breach of the downtown HESCO barrier system on April 30. Also accounting for the extensive damage and high cost of flood fighting, cleanup and repairs was the duration of standing water and repeat crests.

The Mississippi River at Davenport and Rock Island was above flood stage from mid-March through mid-June — 95 days. The all-time record crest of 22.7 feet arrived May 2.

While area rivers are again above flood stage, levels are nowhere near those experienced earlier in the year. Even so, the potential for more fall flooding is being closely monitored.

While fall floods are not regular occurrences, they aren't rare, either.

Communities along the Mississippi River to the north of the Quad-Cities did not get the high amounts of rain or snowfall predicted last weekend. As a result, river levels were not as impacted locally as they could have been.

The upcoming weekend could bring another chance for already high river levels to rise again.

"I think it's safe to say we will get some new precipitation that will affect the local levels, but it's hard to say at this time what the impacts might be," said Alex Gibbs, a meteorologist for the National Weather Service, Quad-Cities. "Any time you get rain, and the river's high, you have the risk of more flooding."

By Tuesday afternoon, street crews in Moline were blocking off sections of River Drive — from 23rd to 55th Streets — due to standing water on the roadways.

Conditions were worse in areas of Davenport, where floodwater breached about half of LeClaire Park and covered most of the access road to Credit Island.

Recent repairs made to the flood-ravaged Credit Island causeway were intended to be short-term, because the city has not yet decided on a long-term flood plan for its nine miles of riverfront.

"It was still in temporary repair, so it had mix fill and no asphalt laid," said Parks Director Chad Dyson. "There should be no extensive costs for whatever may wash out this time."

The future of the road to Credit Island may also be taken into account by FEMA, Gleason said.

"The city is attempting to gain mitigation funds related to this road to put a more flood-resilient access in, however, we will not know if this is an approved project for some time," she wrote Tuesday. "At this point, parks crews have spent around $20,000 on labor, material, equipment and disposal costs (not including volunteer hours).

"If there are not any mitigation funds available for this project, the city would plan a more robust repair in the future."

For now, Lock & Dam 15 remains open to navigation while some downstream locks were closed in recent days, due to rising floodwaters. The locks at 15 in Davenport/Rock Island are not closed until the river level reaches 20 feet.

Police prepping for evacuations | 38 days above flood stage and no end in sight | People need your help: How to volunteer | The latest on road closures | More rain in the forecast. How bad will it get? | Fifth-highest level ever as of this afternoon. The 1993 record will be threatened | Police issue travel warnings

Floodwaters consume most of Credit Island Road on Tuesday in Davenport.

Looking like high tide on an ocean, floodwaters driven by high winds crash into a drinking fountain along the Davenport riverfront on Saturday.

Looking like high tide on an ocean, floodwaters driven by high winds crash into a park bench along the Davenport levee on Saturday.