Striking UAW workers say a judge’s order that is limiting their picketing activities outside a Davenport plant was issued improperly, and they want the temporary injunction vacated immediately.

Attorneys for the Davenport-based UAW Local 281, which is in ongoing labor-contract negotiations with Deere & Co., say a judge in Scott County took only Deere’s side of the story when issuing the injunction last week.

The order directed striking UAW members to limit to four the number of picketers near gates at Davenport Works, and banned burn barrels and lawn chairs, among other restrictions.

In their motion filed Monday to vacate the order, the union's attorneys said Judge Marlita Greve wrote her six-page order within two hours of receiving Deere’s complaint and request — even using Deere’s language, verbatim, in her ruling.

Attorneys Mark Hedberg and Nathaniel Boulton, of Cedar Rapids-based Hedberg & Boutlon, argue that injunction orders must contain affidavits and/or sworn testimony as evidence of allegations made in Deere’s motion to restrict strike activities.

Instead, Deere merely supplied the court with several copies of a prepared document, signed by a half-dozen delivery drivers.

The UAW, meanwhile, was not given an opportunity to respond to the claims nor supply its own evidence, the attorneys wrote. In fact, they said, the union was not notified Deere was seeking an injunction until Greve had agreed to it.

“Not one allegation of actual damage to property, or a single arrest, supports these assertions that wanton lawlessness on the picket line threatens the Plaintiff and the public,” according to the UAW’s motion to vacate the injunction.

“It was an abuse of discretion for the District Court to grant injunctive relief without notice, without a hearing, and based exclusively on information supplied by one party.

“Here, a temporary restraining order petition was considered without a hearing or even notice to the Defendants and was followed by a six-page order being issued all within one hour and fifty-five minutes.”

The behavior by picketers, deemed unlawful by Deere and by the judge, has been within the union’s rights, the attorneys argue.

“First and foremost, the alleged ‘unlawful’ behavior is devoid of a single arrest or citation for a violation of the law,” the motion states.

He said he was aware of no complaints of delivery drivers being blocked from entering any gates at Davenport Works; no one has been arrested or cited by law enforcement over conduct while picketing; he is unaware of any issues or dangers associated with burn barrels or lawn chairs, which were barred by Greve’s order.

“There is no evidence that any notice was provided to the Defendants prior to filing the petition, despite the fact that the Defendants include a local union with its place of business located literally within blocks of the Plaintiff’s facility, that the parties are regularly meeting in-person in the local area, and the parties have been in regular communication throughout the timeframe in which the petition was filed,” the attorneys concluded.

As the UAW's motion to vacate the temporary injunction was filed late Monday, Greve has not yet responded.

Meanwhile, the president and the chairman for Local 281 also submitted affidavits to the court, assuring Greve their members are complying with her order. She had given them three days to do so.

"The union has provided each of our officers, representative agents, members and picketers with a copy of the order, along with a clear written directive that they refrain from engaging in and of the misconduct enjoined in the order as well as advising them of the consequences for violating the order," according to affidavits signed by 281 President Travis Hanrahan and Chairman Michael "Gus" Mansker.

The pair also told Greve in their filing, "We have designated responsible persons to act as picket captain to control the conduct of pickets."

They have limited gate-picket presence to four people and have removed fire barrels and chairs from picket-line areas. 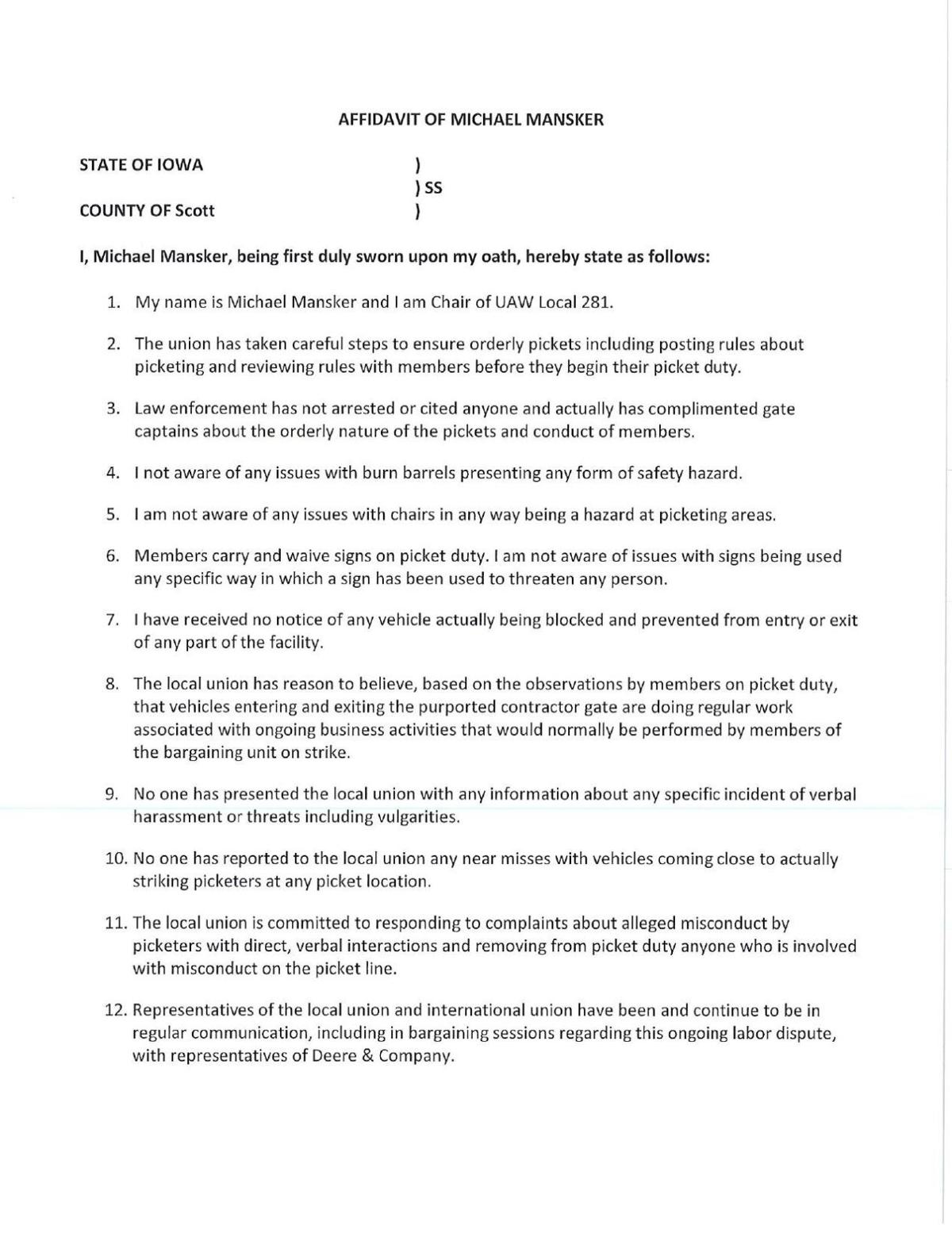 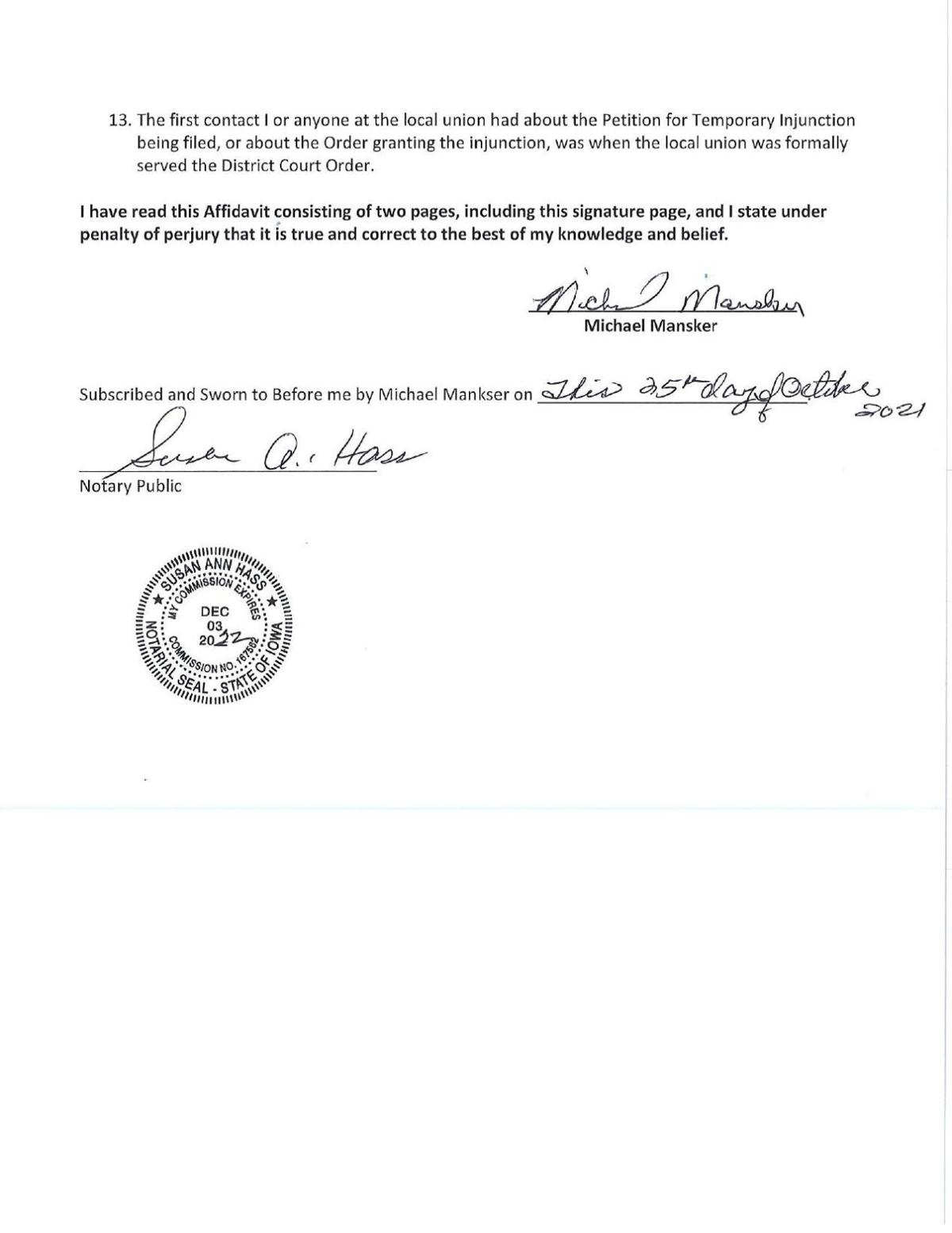 In the legal back-and-forth over a temporary injunction against picketing UAW members, an attorney for Deere & Co. now is asking the judge…