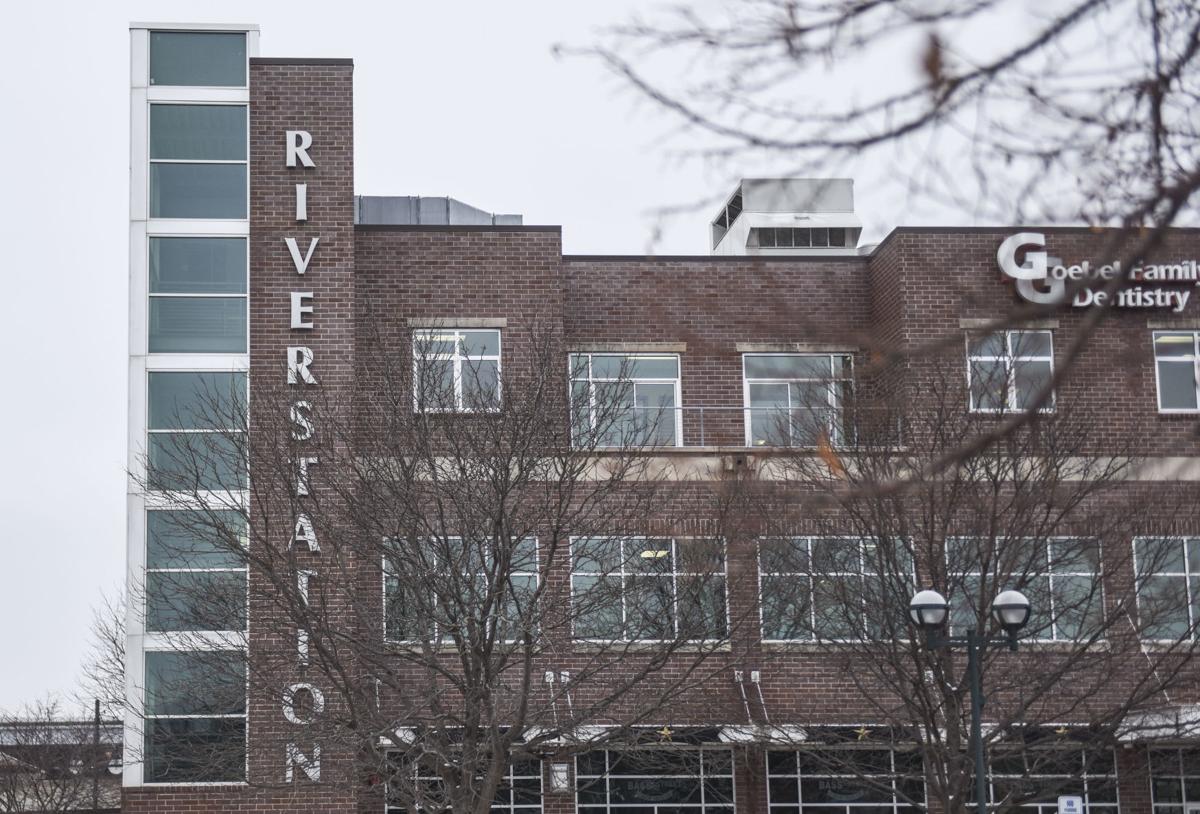 River Station at Bass Street on Monday in Moline. Moline is suing Kaizen Co., which leases the property, saying it has not paid certain rent payments and other related late fees. 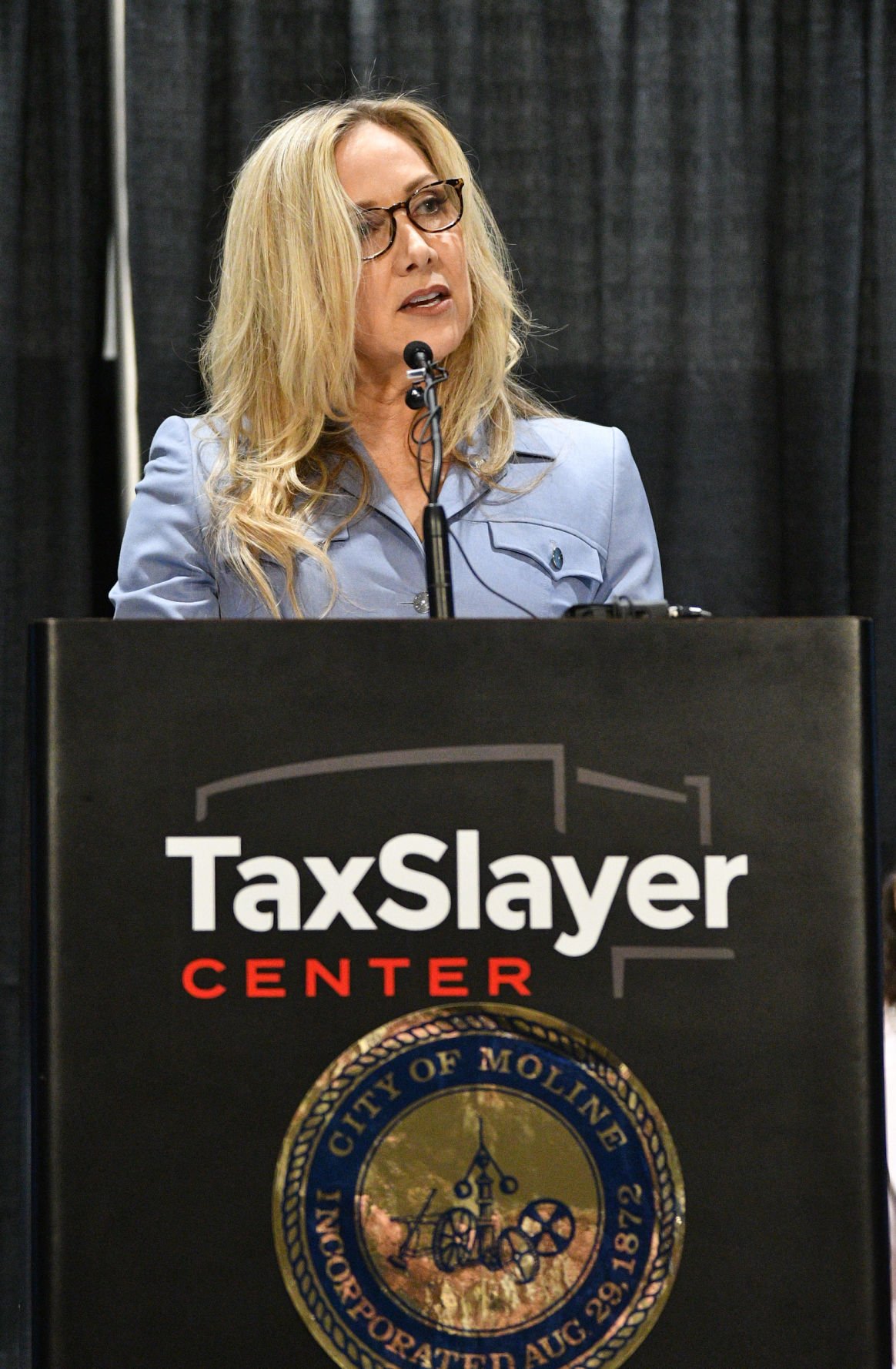 Moline mayor Stephanie Acri delivers the annual State of the City address on March 18, 2019, at the TaxSlayer Center in Moline.

The mayor of Moline said a lawsuit is being filed today, seeking approximately $1.5 million in back rent, interest and penalties on city-owned property along River Drive.

The lawsuit alleges breach of contract by Kaizen Co., which entered into a lease agreement with the city in 2003. The arrangement obligated certain rent payments and related late fees for land at 1601 River Drive, occupied by Bass Street Chop House and Quad-Cities Chamber.

The agreement also stipulated that the assessed value of the rental property, dubbed River Station, would reach $7.2 million.

If Kaizen failed to deliver a project with a value of $7.2 million, the agreement stated, additional rents would come due. That amount is estimated at $67,000 annually.

Mayor Stephanie Acri said the purpose of the lawsuit is to compel Kaizen to pay the $800,000 in overdue "additional rent," more than $600,000 in interest and penalties on the unpaid balance and attorney fees, but it does not attempt to evict Kaizen.

Attorneys for the company did not immediately respond to a message seeking comment.

Former Kaizen partner Chuck Ruhl said in 2012 that the building was not performing well and had been refinanced. At that time, Kaizen was more than two years behind on rent payments.

Ruhl said Monday that he sold his interest in Kaizen to partner Kent Pilcher in 2014.

The mayor said she and aldermen were unaware "of the breadth of the issues" involving overdue payments until a recent review of city TIFs.

A city-supplied timeline of the Kaizen deal places some focus on three former city leaders.

Acri said she is confounded by a deal that was being pushed in July 2018 by former city administrator Doug Maxeiner, development director Ray Forsythe and city attorney Maureen Riggs that would have forgiven Kaizen's debt and would have turned the city-owned land over to Kaizen for $10, despite an agreement that valued it at $500,000.

Maxeiner, Forsythe and Riggs resigned last year within five months of each other.

When staff recommended the sale, Acri said, aldermen were not fully aware of the financial implications, regarding how much Kaizen owed.

More questions arose when an alderman pointed out if the council agreed to sell the land for $10, the city could be on the hook to make up the difference in its value, because federal money was involved in the development.

When aldermen questioned the proposal, the mayor said, they did not get answers.

"They (Maxeiner, Forsythe and Riggs) just left," she said, referring to the resignations. "They never pursued it; they buried it I guess.

It was not until Acri began to review reports on the city's Tax Increment Finance Districts, TIFs, that the larger financial picture became clear, she said.

River Station is in TIF 1, and the amounts outstanding under the agreement added up to more than $1.5 million when interest and penalties were calculated.

Maxeiner resigned as city administrator in late January of 2019. His replacement, Lisa Kotter, started with the city in late April and resigned about five months later.

Forsythe left the city April 10. He did not immediately respond to a request for comment.

Riggs and her deputy attorney also resigned in April, and Riggs now works for the Moline law firm of Churchill & Churchill, which represents Kaizen.

The base rent owed is now about $31,000 and is due at the end of this month. The additional rent outlined in the development agreement now is about $800,000, documents show. Interest and other penalties for non-payment have reached $640,000, and the estimated value of the land is $500,000, making the total due $2 million if the city were to reconsider selling to Kaizen, city documents show.

"This action does not, currently, seek to terminate the Ground Lease, seek the eviction of Defendant Kaizen, or seek possession of the Premises," the lawsuit states. "To date, despite repeated demands and formal written notice of default, Defendant has refused to pay the additional rent and the interest on unpaid amounts as specified in the Ground Lease, thus necessitating the filing of the instant action for damages for breach."

In July of 2018, Moline city staff recommended to the City Council that the city release Kaizen from all current contractual obligations due under its lease agreement with the city, and that the city transfer to Kaizen ownership of the land on which River Station is located for $10.

In exchange, Kaizen would pay the city about $43,000 annually for the use of 80 parking spaces on neighboring properties.

The council rejected the recommendation.

On Monday, Mayor Stephanie Acri said the proposed sale of the land at 1601 River Drive would have resulted in annual losses of about $50,000, because Kaizen no longer would have been obligated to pay about $98,000 in rent.

The proposal also would have forgiven about $800,000 in overdue lease payments.

The city also would have lost out on the estimated $500,000 in the agreed-upon value of the property, the mayor said.

The Quad Cities Chamber wants to partner with Moline to enhance relationships with businesses in the city.

River Station at Bass Street on Monday in Moline. Moline is suing Kaizen Co., which leases the property, saying it has not paid certain rent payments and other related late fees.

Moline mayor Stephanie Acri delivers the annual State of the City address on March 18, 2019, at the TaxSlayer Center in Moline.