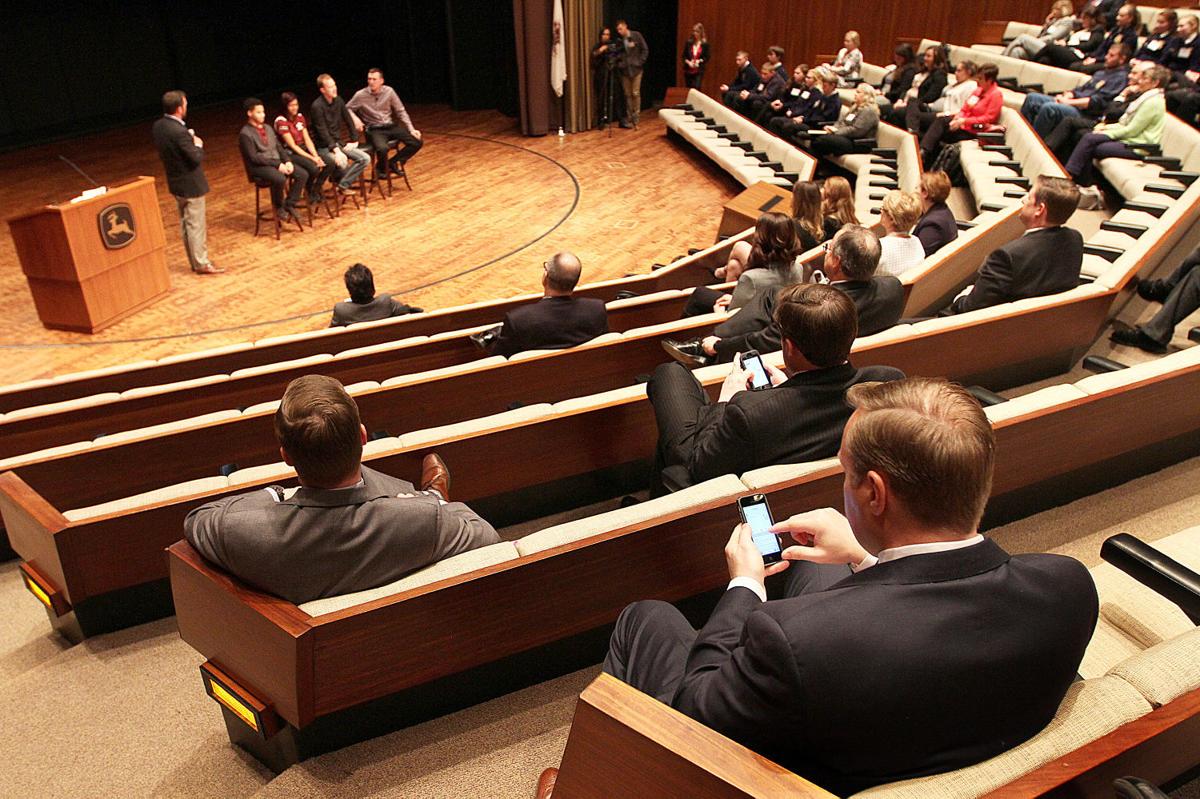 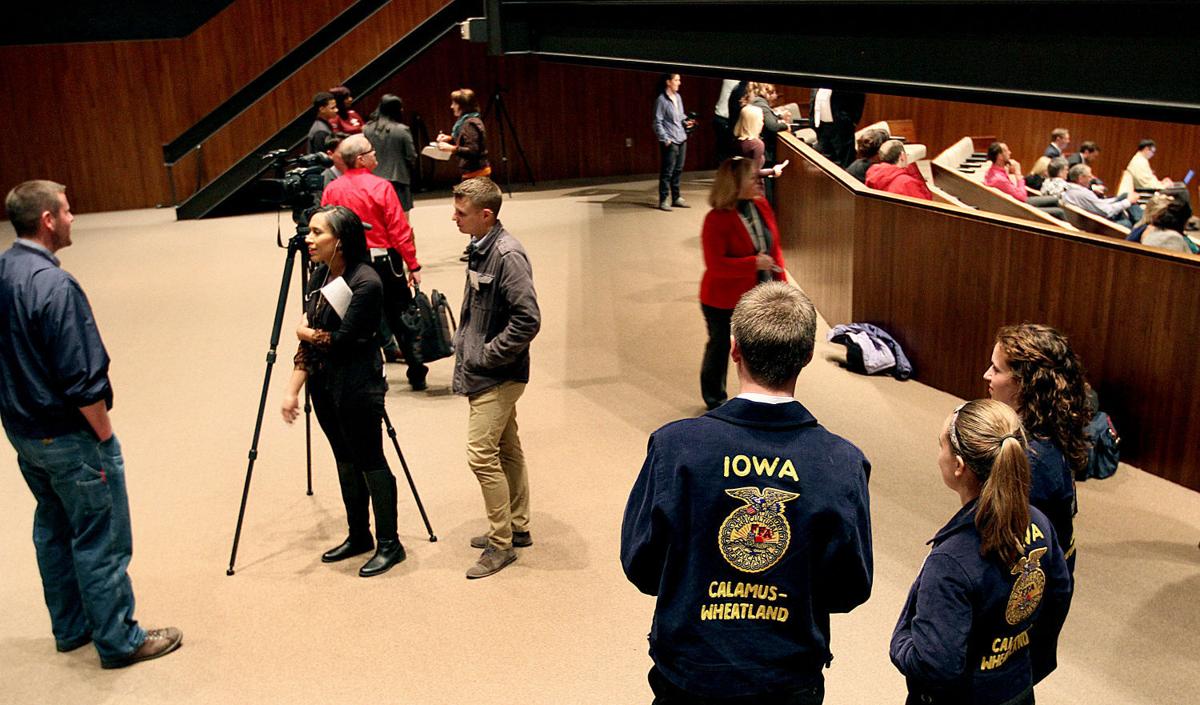 Students from Calamus-Wheatland were among those at a virtual farm tour, broadcast online Tuesday at John Deere World Headquarters in Moline. Co-sponsors are the U.S. Farmers & Ranchers Alliance and Discovery Education, an arm of the Discovery network. 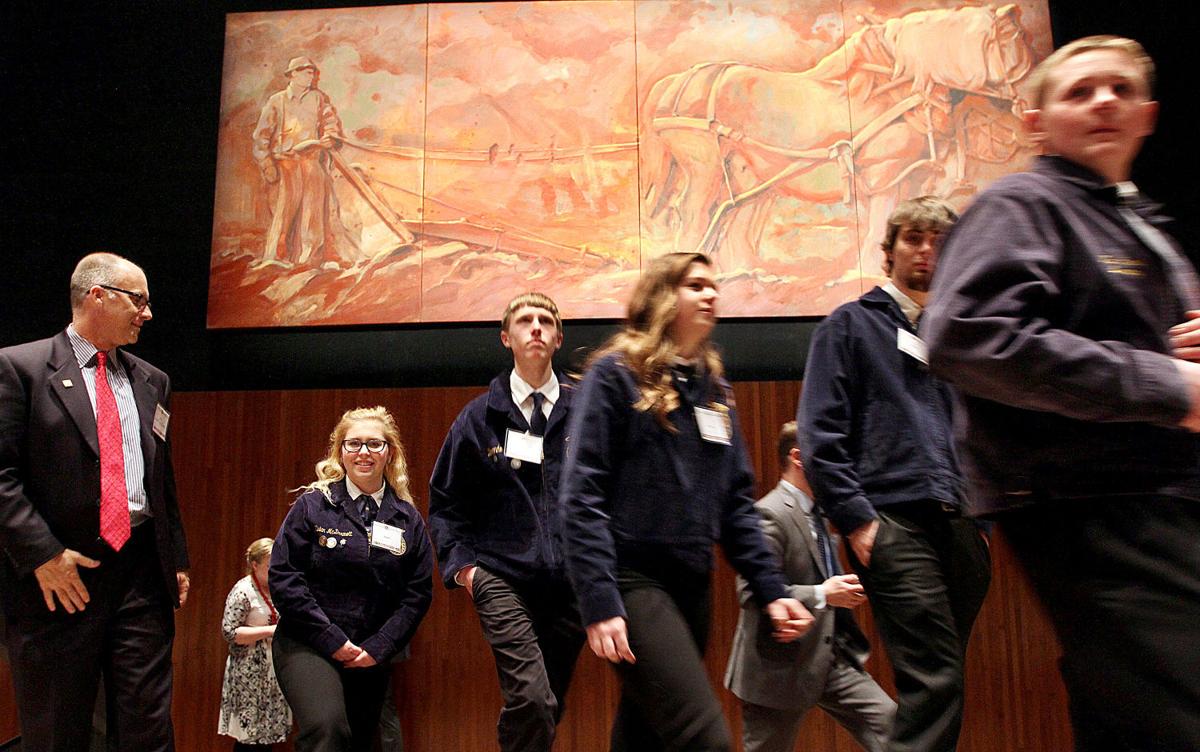 Local Future Farmers of America students were among the live audience at an online farmer tour, live-streamed to 37,000 students in 1,200 classes in the U.S.

Virtual reality on a Nebraska farm tour combined with a live audience made for a first-time event Tuesday at Deere & Co. headquarters, Moline.

Designed to highlight innovation behind sustainable food production, the web broadcast may have originated in Moline, but it was seen online by 37,000 high school students in the United States.

It was sponsored by the U.S. Farmers & Ranchers Alliance, St. Louis, and Discovery Education, an arm of the Discovery network.

The Future Farmers of America, or FFA, students from Scott and Clinton counties wore their blue jackets to represent North Scott and Calamus-Wheatland high schools. The students viewed the live stream and asked questions of the presenters, made up of partners in the Farmers and Ranchers Alliance.

The unusual event featured the broadcast at one end of the entrance area of the Deere headquarters, with a live audience watching on the screen in the company's auditorium about 50 yards away.

The virtual tour involved a farm owned by the family of David Loberg, a corn and soybean producer from Nebraska. Loberg later took part in a panel discussion with fellow farmer Ryan Veldhuizen of Minnesota and two ag students from Chicago.

The Chicago contingent was from the Chicago High School for Agricultural Sciences and included students who took part in the live show as well as the panel discussion.

The FFA students from Calamus-Wheatland said they learned from the live stream, but some of the information also was familiar.

Emma Olson, 16, a junior from Grand Mound, said farmers still need to do more to find a way to share resources with the general public.

But a discussion on GMOs, or genetically modified organisms, and GPS navigation systems were both familiar topics to Janna Diercks, 16, of Grand Mound.

Classmate Hannah Garland, 17, of Dixon said the students were officers in the FFA group that included 85-90 other students at the high school in Wheatland.

Representatives of Discovery Education said the live stream was a great success.

"It was a lot of fun," said Judy Lem of Silver Spring, Md.

The Moline event was the first virtual farm tour.

Farmers Loberg and Veldhuizen said they try hard to explain their lifestyles to the public. Loberg uses Facebook, collecting friends from around the country. He posts information during the work day to explain what he does on the farm and why he does it.

Most people who meet Veldhuizen are interested in his profession and have questions. But he also sees a fear of the unknown, such as in how the farmer treats livestock.

The FFA students also get feedback from the public. Amanda Gorzney, 17, of Grand Mound, said many students think they have to be farmers to be in FFA, but it's an all-inclusive organization.

That said, many students think farming is "dumb," she said.

Jake Looney, 15, of Wheatland lives on a farm and has cousins from Cedar Rapids. He agrees there is a disconnect between rural and city kids: His cousins thought the Looney's Deere combine was harvesting sand. It actually was soybeans.

A project to connect ag producers and information about farms to the online public is available at farmlandfilm.com.

Students from Calamus-Wheatland were among those at a virtual farm tour, broadcast online Tuesday at John Deere World Headquarters in Moline. Co-sponsors are the U.S. Farmers & Ranchers Alliance and Discovery Education, an arm of the Discovery network.

Local Future Farmers of America students were among the live audience at an online farmer tour, live-streamed to 37,000 students in 1,200 classes in the U.S.