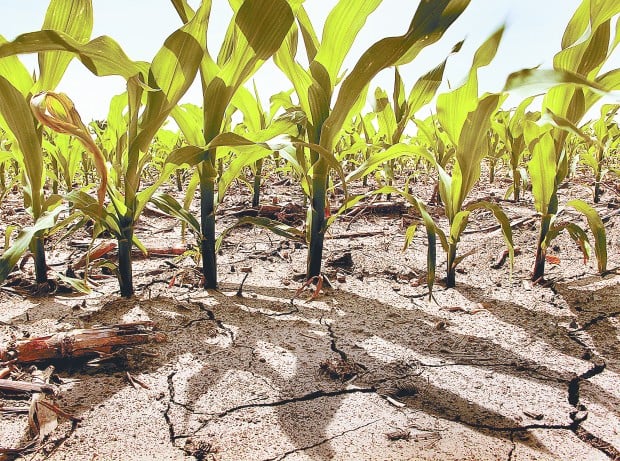 A corn field is photographed near Donahue, Iowa Wednesday May 23, 2012. (Jeff Cook/QUAD-CITY TIMES) 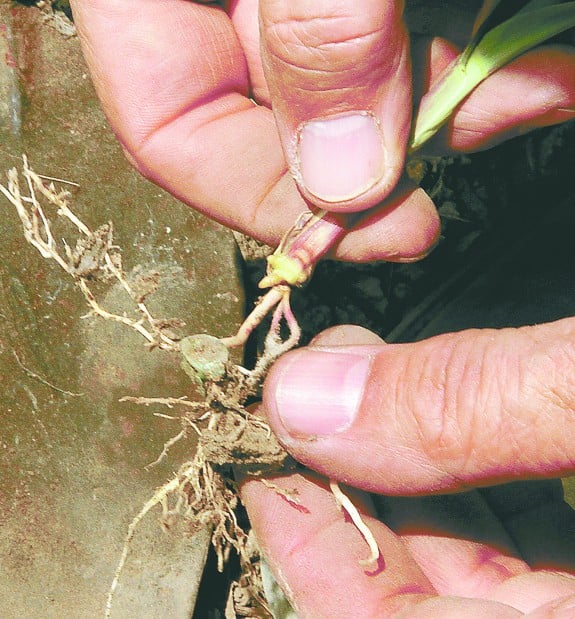 A farmer examines a corn plant in his 185 acre field near Donahue, Iowa Wednesday May 23, 2012. He said brace roots were poorly developed because of lack of rain. (Jeff Cook/QUAD-CITY TIMES) 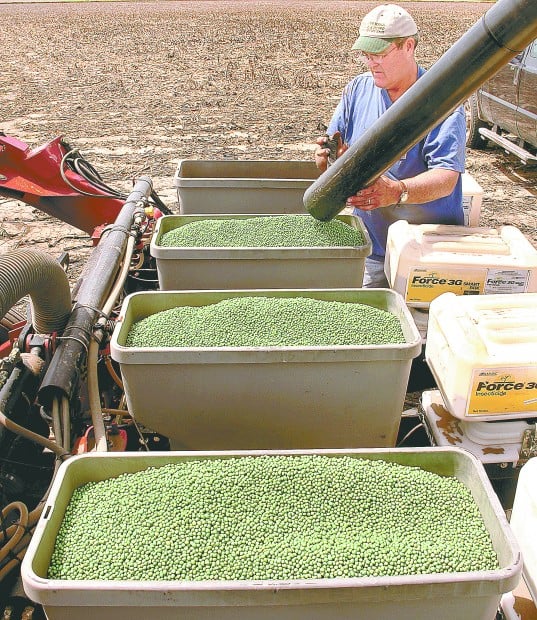 An early spring has given Iowa and Illinois farmers a good jump on planting and other chores, but worries about a lack of rain already are creeping in.

Quad-City farmers are keeping pace with those numbers.

“My corn is all planted and I’ll have my soybeans done by the end of the week,” Scott County farmer Robb Ewoldt said Wednesday as he worked in his fields.

Instead of focusing on planting soybeans, Ewoldt has been chopping hay.

“We’ve been chopping for three weeks,” he said. “Normally we wouldn’t start chopping hay until this week, and if I got some hay done by the first of June, I’d consider that good.

“Everything is way ahead of schedule.”

The early spring and some heavy rains have meant grass is growing in the fields, so that is what his cattle have been eating, Ewoldt said. That saves money on feed.

Heavy rains early in the spring washed out some corn fields, or compacted the soil in them so that the corn that is planted cannot make it through the crust.

“Some of those guys are looking at replanting corn,” Ewoldt said. He said his area got about 4ƒ inches of rain May 3.

Taylor Ridge, Ill., farmer Tom Mueller said Wednesday that he saw some farmers in his area of Rock Island County replanting corn that was drowned by the last heavy rains, which dumped 6 inches in his area.

“They were planting where ponds had formed and stayed for too long,” he said.

Mueller also was out chopping hay, also, a good three weeks ahead of schedule. He said he is toying with the idea of planting some soybeans in the field where he is cutting his hay because he will finish so early. However, the problem is that there is not enough water in the first inch or so of ground to help the soybeans grow.

“There’s plenty of subsoil moisture, so the corn is fine,” Mueller said. It is good for corn roots to have to dig down into the ground to find that moisture as it stabilizes the stalk and helps to keep it standing.

Soybeans are different though.

“Beans, you plant a little shallower,” Mueller said. “You don’t plant beans more than an inch to 1ƒ inches down at maximum and that soil is getting a little dusty right now.

Ewoldt is relying on a little luck to get some moisture.

“The beans I’m planting are going into dry dirt,” he said. “To get it to rain, you either wash your truck or cut hay. I’m cutting hay, so I’m doing my part.”

Driven by high prices, the National Agricultural Statistics Service released a report March 30 projecting that the nation’s farmers will plant 95.9 million acres of corn this year, up 40 percent from 2011. It is expected to be the largest corn acreage in the country since 1937, when producers planted 97.2 million acres of corn.

It is expected farmers will plant 73.9 million acres of soybeans this year, down 1 percent from last year, and down 5 percent from 2010, the report said.

This farm in the U.K. is for animals with special needs

How a Jordanian travels the world from his basement

How a Jordanian travels the world from his basement

A motorcyclist was killed Friday evening in a crash on North Pine Street in Davenport.

Officers were spotted crawling for evidence after apparent incident.

ANAMOSA, Iowa — A man serving a life sentence for a Scott County crime died Saturday at the Anamosa State Penitentiary.

A corn field is photographed near Donahue, Iowa Wednesday May 23, 2012. (Jeff Cook/QUAD-CITY TIMES)

A farmer examines a corn plant in his 185 acre field near Donahue, Iowa Wednesday May 23, 2012. He said brace roots were poorly developed because of lack of rain. (Jeff Cook/QUAD-CITY TIMES)