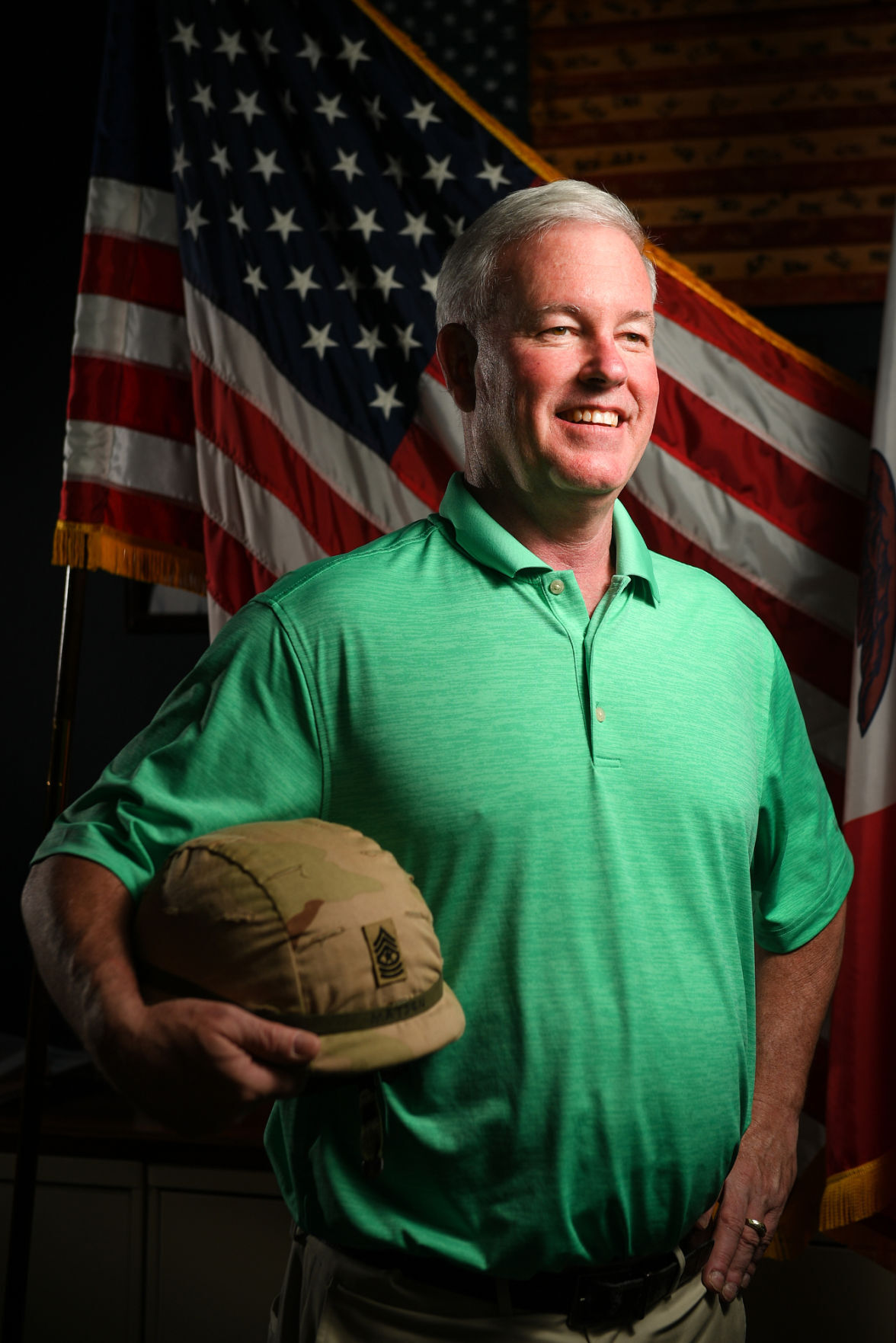 Davenport mayor Mike Matson poses for a portrait holding his helmet he wore during his deployment to Afghanistan in early 2002 in retaliation against the Taliban for the Sept. 11, 2001 terrorist attacks at City Hall Monday, Aug. 16, 2021, in Davenport. 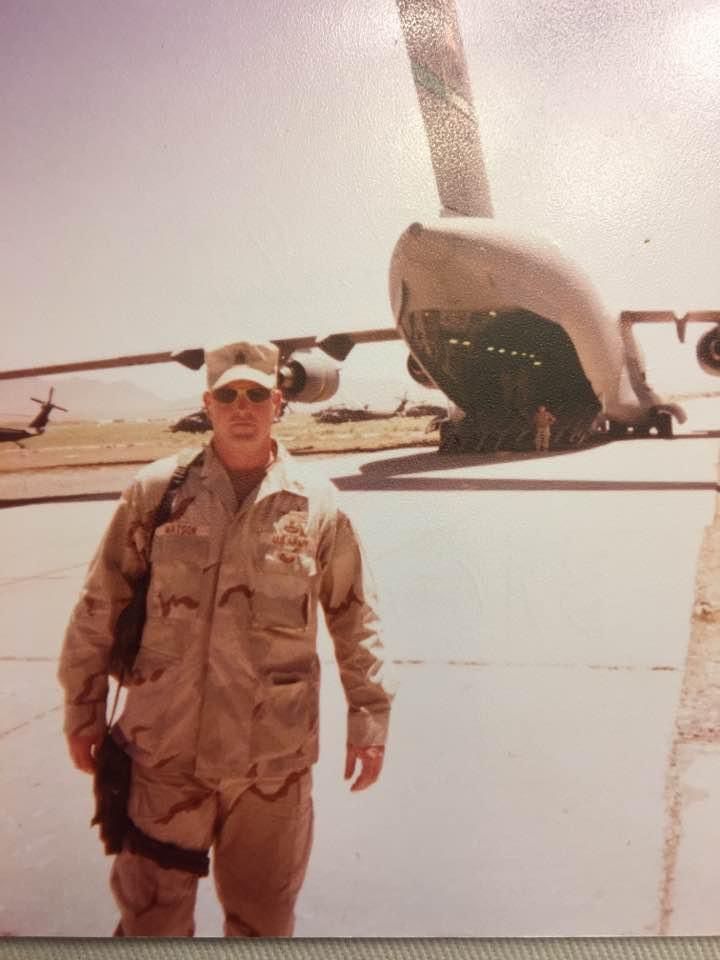 Davenport Mayor Mike Matson stands near a cargo plane at Bagram Air Base in Afghanistan in 2002. Matson assisted in advising joint special operations missions as a sergeant major in the U.S. Army.

He retired from the Army in 2003 as a sergeant major.

On the morning of Sept. 11, 2001, Matson was in a classroom at Fort Benning, Ga., for a meeting on mobilizing U.S. Army special operations forces to Bosnia and Kosovo. Matson at the time served as the reserve senior enlisted advisor to the commander at Army Special Operations Command at Fort Bragg, N.C.

"One of my friends, another sergeant major that was with me, came in and said, 'Mike! Come in here. A plane just flew into the World Trade Center,'" Matson said. "Everyone in the room paused."

Matson and others hurried to a nearby room with a TV with a live news feed. They watched as smoke billowed out of the North Tower.

Several minutes later, they watched as a second Boeing 767 appeared out of the sky, turned sharply and sliced into the South Tower.

"All of us said almost at the exact time, 'We're at war with someone,'" Matson said. "Two planes are not accidentally flying into two towers."

Up to 20 minutes go by. Matson's and everyone else's beepers go off with messages instructing them to get back to Fort Bragg immediately.

"So everyone realized we're being attacked," Matson said.

He and others quickly headed to the airport and rented a car, knowing flights would be grounded.

"We get back a day later and the planning starts," Matson said. "As days, weeks, months (pass), through October, it was all about identifying quickly — and they did — who" perpetrated the attacks and flew the planes.

"The initial push was a major use of conventional troops, and then it shifted to special operations forces, which is where I was and where everybody in our realm thought would be a major piece," Matson said. "Then it's, 'Where do we go to stage, and how do we enter Afghanistan?' So then they started the bombing campaign, and then we started working with Uzbekistan" to move forces into northern Afghanistan and work with the Northern Alliance, a loose coalition of mujahideen militias that maintained control of a small section of northern Afghanistan.

"Afghanistan was like a wild, wild west," Matson said. "Everybody had a gun. Everybody had an RPG. There was sort of control. Sort of not. The Northern Alliance was organized. But, everybody else? You drove from Bagram to Kandahar in a couple vehicle convoy, but everybody's shooting at you. You're not sure who's who."

Now, decades later, he's watched his son and former students deploy to the same battlefields to continue the fight.

Matson is a retired Junior Reserve Officer Training Corp teacher at Davenport Central High School. His son is a captain in the 82nd Airborne Division and has deployed twice to the Middle East.

"I know people that have deployed many times," Matson said. "There's some people in the military, especially in the special operations community, with double-digit deployments to Iraq, Afghanistan, Syria, wherever. ... And the families that have to deal with that? The sacrifice of certain members of the military is pretty extreme."

He noted there are 10 divisions in the Army.

"At the height of (the wars in) Iraq and Afghanistan, during the surge ... five divisions were in the fight," Matson said. "So that leaves five. Well, one or two are coming back and one or two are getting ready to go (deploy). They're just in a constant op tempo of: Go. Do your six (months) or a year. Come back. Refit and get ready to go again, right? ... There are some people I know their families hardly see each other in a decade, 'cause they're gone all the time."

Matson continued: "Are we going to keep doing this? Because all we're really doing is asking the same units, the same people — and, now, the next generation — to do the same thing over and over."

"There are kids I've taught in school that have deployed many times," Matson said, noting only 1% of Americans served in the military. "Basically, 18-, 19-, 20- and 21-year-olds are doing our fighting. Young men. Now, women. ... And there's not very many of them. ... (A)nd in this case for 20 years we're asking a very small group of folks to do something for us."

Asked in a followup interview of the decision and execution to withdrawal all U.S. troops from Afghanistan, ending America's longest war in a frantic final exit, Matson replied: "I think everybody agrees it's time to get out."

"I'm not going to question how or what, because I'm not there," Matson said, while praising what's believed to be the largest and fastest airlift in U.S. military history.

"All we should do is support the folks that go and do what's asked of them, i.e. our military," Matson said.

Asked to reflect on the lasting legacy 9/11 has had on the U.S. military, Matson replied: "Certainly, it changes how we do business.

"And the sacrifice that our military members and their families do for their country is unheralded," he said. "And every day we should think about their sacrifice and honor it."

Meet the Homecoming Queens from Assumption and Bettendorf. They're both on the honor roll. Plan to study science in college. And are living with cancer.

'We were better before': Masking debate creates rifts in Pleasant Valley schools

The Pleasant Valley School Board met Monday and quickly became a forum on the issue of masking students in the effort to mitigate the spread of COVID-19. There appeared to be little common ground.

Man on parole charged in shooting incident at Davenport club

Seven days before completing his time on parole from the Iowa Department of Corrections, a Davenport man has been arrested in connection with …

Several hurt, one seriously in three-vehicle crash in Davenport

A motorcyclist suffered serious injuries and three other people were hurt in a three-vehicle crash late Friday on Davenport’s West Locust Street.

Davenport police arrested a Wilton, Iowa, man early Sunday in connection with the June 30 robbery of the I. H. Mississippi Valley Credit Union…

Davenport mayor Mike Matson poses for a portrait holding his helmet he wore during his deployment to Afghanistan in early 2002 in retaliation against the Taliban for the Sept. 11, 2001 terrorist attacks at City Hall Monday, Aug. 16, 2021, in Davenport.

Davenport Mayor Mike Matson stands near a cargo plane at Bagram Air Base in Afghanistan in 2002. Matson assisted in advising joint special operations missions as a sergeant major in the U.S. Army.