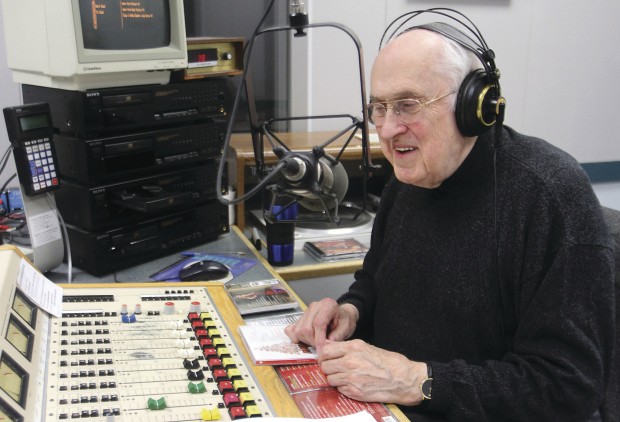 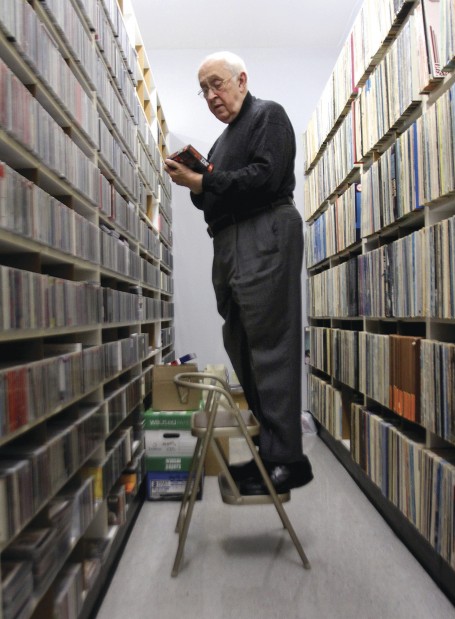 Don Wooten, host of "Jazz After Hours" and "Saturday Morning Live" on WVIK, 90.3 FM, Augustana College-based National Public Radio station, combs the archives Saturday, Dec. 8, 2012, looking for artist to play on his next show in the library at the station. (John Schultz / Quad-City Times)

If his picture didn’t accompany this column, it would be fun to ask you to guess who I’m talking about.

The first hint would be: He has one of the most recognizable voices in the Quad-Cities.

But it’s that voice that gives him away.

In a booth at a Village Inn restaurant last week, the tabletop became a piano keyboard as Wooten tapped his fingers, imitating a favorite jazz riff. As he recalled the early days at WHBF-TV in Rock Island, he absently spun his milk glass.

The volume of the 83-year-old’s voice rising, the throaty uniqueness clicked for a diner two tables away. The familiarity of it drew the man to our table.

“Even when I was all over the TV, it wasn’t until I spoke that people would say, ‘Hey, Don Wooten.’”

For 60 years, with an exception here and there, Wooten’s voice has been surfing the Quad-City airwaves with his original program, “Jazz After Hours.” The show that started on an AM-only station out of Rock Island in 1952 still is a popular program at Augustana College-based WVIK, 90.3 FM.

But Wooten’s cannonball into the public pool began two years earlier, during his senior year at St. Ambrose University in 1950.

Even as he was getting his feet wet at his first radio job at KWPC, Muscatine, Wooten took a job in production at WOC-TV, Davenport, just six weeks after the station opened. After two years in the seminary at St. Ambrose, he had changed courses, earning a degree in biology instead.

But science wasn’t going to stick, either.

Wooten’s considerable interest in just about everything was building up so much intellectual steam, he was becoming unstoppable.

Even his November 1950 marriage to Bernadette Polka didn’t slow him down. As the couple’s five children came along, Wooten kept working, changing careers and filling local spotlights.

When “Bernie” died in 2011, his touching tribute to her and their 60-year marriage revealed the depth of his devotion, along with his writing talent. The allegiance is evident in every other aspect of his complex life.

In the early days, Wooten took his first full-time gig at WHBF-TV, Rock Island, rather than at WOC, Davenport, because he was so enamored of the work of broadcast journalist Edward R. Murrow that he wanted to work for CBS, too.

He did “booth work” as an announcer and as “a pitchman,” doing local commercials. One day, he was asked to do the weather for the TV news.

“I said I needed four hours a day to go to the airport and learn from the weather observers out there,” he said. “So, that’s what I did.”

When a slot for a public-affairs program opened at the TV station, Wooten took a camera to the former East Moline State Hospital, taking on a project on a proposed bond referendum for mental health.

“That was tough,” he said of what turned out to be his audition tape for the slot. “I saw children that looked like pieces of children. Even now, thinking about it is almost unendurable.”

But he got the job and, even better: “The vote for mental health funding passed at a higher percentage in the WHBF viewing area than anywhere else in Illinois.

“I produced a show that would tear your heart out, and that’s what it did.”

Wooten’s success earned him a reputation and the freedom to do, basically, whatever he wanted. That meant fitting in a teaching job at Alleman High School, Rock Island, and starting the Genesius Guild, the summer theater series that continues in Rock Island’s Lincoln Park, to feed his public-performance addiction.

He hosted the TV show, “Spectrum,” from 1959 until 1971. He also hosted “At Issue” while simultaneously doing radio shows and directing a high school chorus.

Then it was time for a change.

“My bid for the (Illinois) Senate came along, at least partly, because I wasn’t sure what else to do,” he said. “I’d always been interested in politics.”

In those days, he recalled, a legislative position didn’t pay much more than a job in radio.

“It’s nice to have money, but it’s not that important. The important thing is to find fulfillment. I have been the most fortunate guy I know in that regard.”

When he lost a second bid for re-election, Wooten went back to radio, focusing his considerable energies on turning a “sandbox” station at Augustana College into “an all-out NPR station.”

“It took me three years, but we got it done,” he said.

Wooten served as WVIK’s general manager until retiring the post in 2003. He did so largely to spend more time at home with his wife, who was suffering the effects of serious osteoporosis. He’d long been an in-demand public speaker, and he stayed connected to the public that way, too.

Of course, he didn’t retire altogether. It was too soon to put that voice to rest.

“‘Jazz After Hours’ is No. 1 in its time slot,” said Jay Pearce, general manager of WVIK. “Don is so well-known, so knowledgeable and so well-connected to our community, his programs are must-listen radio for thousands of people who have watched or listened to him for years, or who have discovered him more recently.

“Radio is a very personal medium. Don is a master communicator.”

“The great sin of my life is that I buy books, and I buy records, and I can’t stop,” he said.

Sadly, his hearing isn’t what it used to be.

“I used to be able to trust my ear,” he said. “I spent most of my life listening to music. Now I like silence, too.”

And, of course, all those books.

Asked to rate his many loves, he folded his long fingers, leaned back in the booth and exhaled.

“Shakespeare, overall,” he said. “No question about that. He can move you so profoundly in a few words.”

Closing his eyes, he offered proof with a quote: “There is nothing either good or bad, but thinking makes it so.’

“Think about it,” he coaxed. “How succinct can you get?”

His enthusiasm is contagious, and he knows it. Wooten speaks with his hands, and with his eyes. It is an underused gift for a radio man. But he is so much more.

“I’ve tried to figure out: Who am I?” he admits. “How do I tie all these threads together? I really don’t think I ever got out of the seminary.

“I think, more than anything, I’m really a teacher. I work at trying to get people to enjoy the beauty in the world and to get its depths.”

“He did a masterful job of building a public radio station from scratch and establishing a tremendous reputation in the community,” Pearce said. “One of the many things I enjoy about my job is the opportunity to sit and talk things over with Don.

“And there is that intoxicating voice. I could literally listen to him reading a phone book. I sincerely hope he outlasts me. I certainly would not look forward to the task of finding a replacement for the senator.”

Or the radio host, the writer, the weatherman, actor, ad man …

Don Wooten, host of "Jazz After Hours" and "Saturday Morning Live" on WVIK, 90.3 FM, Augustana College-based National Public Radio station, combs the archives Saturday, Dec. 8, 2012, looking for artist to play on his next show in the library at the station. (John Schultz / Quad-City Times)