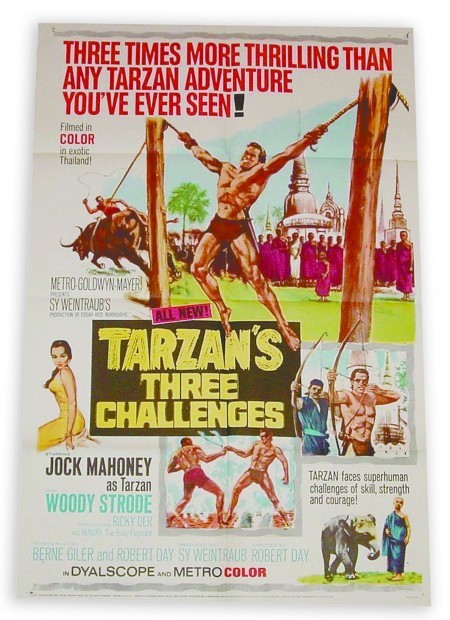 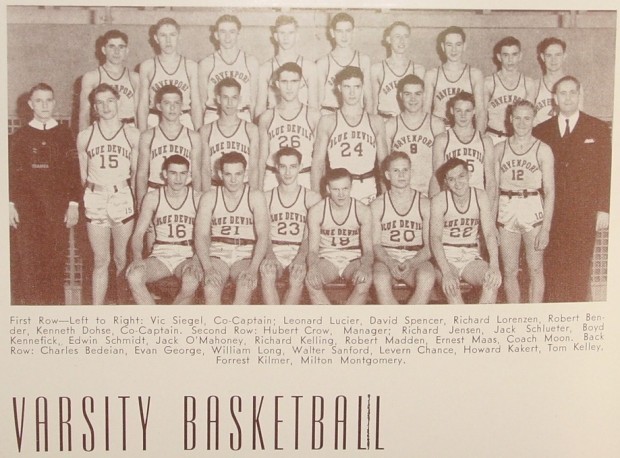 Jock Mahoney, center row, fifth from left, who was a star athlete at Davenport High from 1936-38, received an athletic scholarship and was a member of the football, basketball, and swim teams at the University of Iowa.

Doug: Awhile back you wrote a column about an Elvis movie poster and I thought maybe you could tell me what my Tarzan poster is worth. I bought it years ago at the flea market in Davenport.

Dear Daryl: Since you didn’t specifically mention it, I’m going to assume that you and other readers may not be familiar with the he-man who played the lead in “Tarzan’s Three Challenges.” Long before he swung from tree to tree, Jock Mahoney honed his ape man skills running the streets of Davenport.

His family roots here predate the Civil War when his great-great-grandfather, Wilhelm Thoeming, was a resident butcher. Mahoney spent most of his childhood in the west end and central city. During his elementary and junior high school years, his family lived in a home at 2204 Rockingham Road, which was torn down and hauled away years ago to make room for a Sandy’s drive-in and is now occupied by Papa Bear’s Family Restaurant. Mahoney attended West Intermediate School, since renamed for Frank L. Smart, but Mahoney moved just before entering high school to a house at 436 W. 8th St., which has also been razed.

Jack was a physically big kid and excelled as an athlete. A well-rounded, genial and gregarious student, he played football and basketball, sang in the a cappella chorus and boys glee club, and acted in several school productions.

As a member of the sophomore football team, he helped defeat the DeWitt varsity team, a feat that had never been achieved before. He was a two-year letter-winner on the gridiron and received recognition as a fourth-team all-state end. In his senior year, the Blue Devils outscored their opponents 164 to 43, and the game played on Thanksgiving Day against Moline was witnessed by the largest crowd in Quad-City history to see an area high school game. Their seven home games were attended by more than 30,000 fans.

Mahoney was also a two-year letter-winner in basketball. In the second game of his senior season, he copped scoring honors with 11 points in a 24-13 win over Dubuque High School. Unfortunately, he graduated in January and left the team at midseason. The cagers finished with a 20-2 record, had a capacity crowd for every home game and outscored their opponents 807 to 483. Vic Siegel, a classmate and the star of the team, recently recalled Mahoney’s singing talents and sense of humor as well. Apparently, the team bus rides home after an away game often featured Mahoney’s renditions of classics such as “The Lady in Red” — complete with the lyric “she makes her living lying in bed.”

Mahoney’s athletic ability, however, was most evident in the pool. He spent nearly all of his free time swimming at the YMCA and working as a lifeguard during the summer.

Also, for recreation and fitness, Mahoney belonged to the German Turnverein Gymnastics Club. Climbing and swinging from the rope vines at the Central Turner Hall and swimming the croc-infested waters of the Y certainly proved to be the fortuitous training he would need to survive the jungles of Hollywood.

Somewhere along the way, Jack the athletic jock came to be known as Jocko Mahoney. Then, seemingly without rhyme or reason, he is identified in his posed senior yearbook photo as Jack O’Mahoney, while throughout much of the same annual he’s still referred to as Jack Mahoney. He later claimed that the change reflected the adoption of his true, original Irish family name. However, I have yet to find evidence of the O’Mahoney surname referred to or appearing in any previous documents.

After high school, Mahoney enrolled at the University of Iowa where he received an athletic scholarship and was a member of the football, basketball and swim teams.

In 1940, while still a student at Iowa, he was listed in our city directory as a machine operator for Hansaloy Manufacturing Co. and residing at 219½ Washington St. in an apartment building that still exists today. Though it would have been the first and last times the O’Mahoney name appeared in our phone book, it was accidentally misspelled as O’Manoney. Interestingly enough, he was listed a second time in the same book, at the same address, as Jack Mahoney. Perhaps even he could not decide what name to go by.

When World War II broke out, our hero enlisted and became a Marine fighter pilot and instructor. After the war, he struck out for Hollywood and eked out a living as a stuntman for stars such as Errol Flynn, John Wayne and Gregory Peck. Eventually, Mahoney received his big break when Gene Autry signed him for the lead in his television series “The Range Rider.” He also is remembered for playing the lead in the TV Western “Yancy Derringer.”

Mahoney played Tarzan in only two movies: “Tarzan Goes to India,” which was shot on location in India, and “Tarzan’s Three Challenges,” which was filmed in Thailand. He was noted for performing all of his own stunts, and during the course of filming the latter, he suffered dysentery, dengue fever and pneumonia. The film was released in 1963, and Mahoney, at the age of 44, would forever go down in history as the big screen’s oldest Tarzan.

In 1978, Mahoney appeared in his final picture, along with his stepdaughter, Sally Field. Her then-boyfriend, Burt Reynolds, directed and co-starred in it as well, with the film ironically and fittingly titled “The End.”

Mahoney was involved in an automobile accident in 1989, was hospitalized and died two days later of an apparent stroke.

Though perhaps worth slightly more to a sentimental local, I’d value your poster in the $75 neighborhood. I’m afraid people won’t pay much for an item they intend to hide away in a box, and there aren’t many fans who love Tarzan or this movie enough to permanently display it on a wall.

Jock Mahoney, center row, fifth from left, who was a star athlete at Davenport High from 1936-38, received an athletic scholarship and was a member of the football, basketball, and swim teams at the University of Iowa.