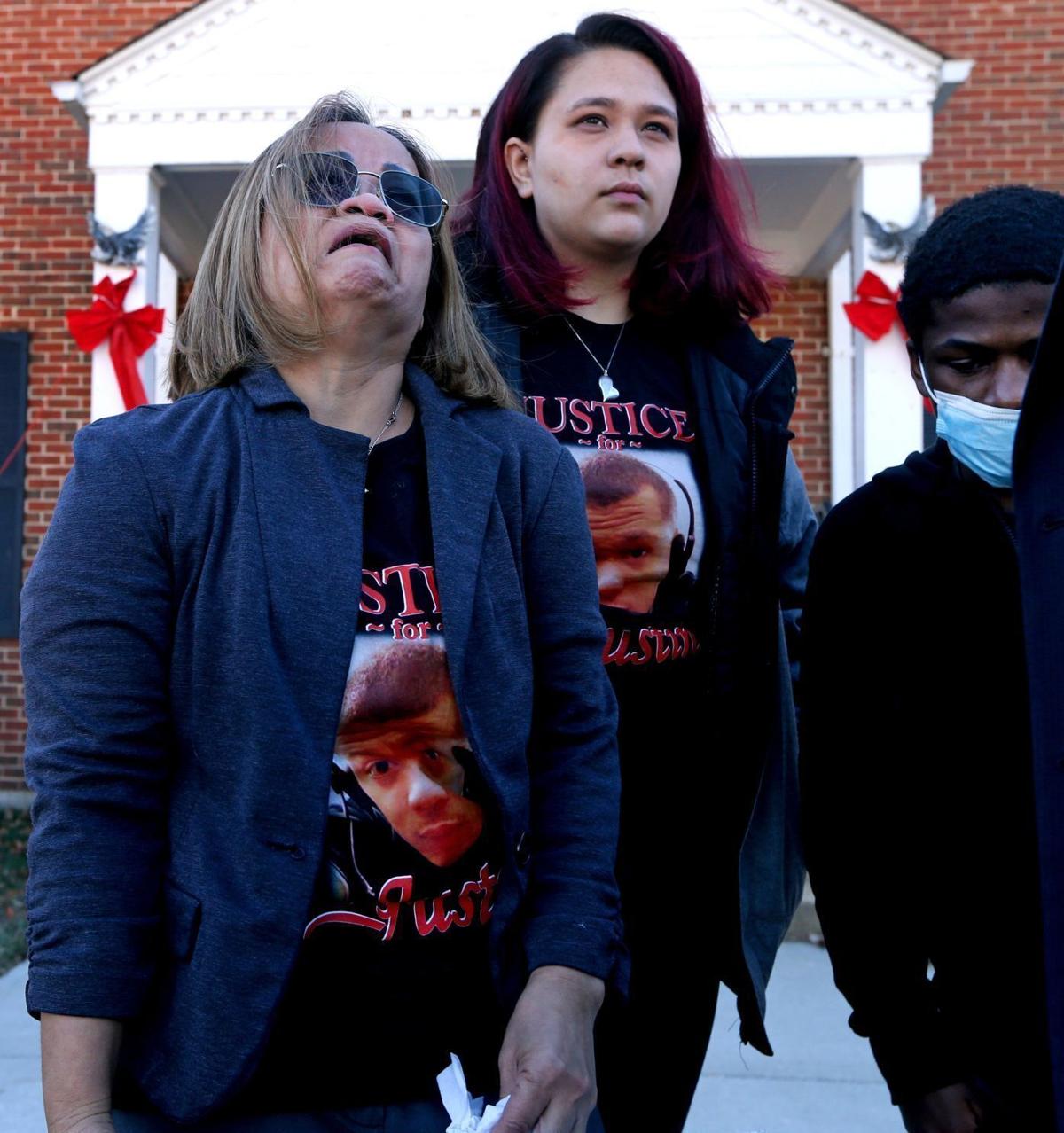 "It's all one-sided," said Eva Bruns, left, the mother of Justin King, who stands alongside King's siblings Jeneva, center, and Jordan after law enforcement gave testimony during a coroner's inquest into Justin King's controversial death outside the Crawford County Courthouse in Steelville on Tuesday, Jan. 11, 2022. Bruns believes someone should be charged with her son's death. Photo by Laurie Skrivan, lskrivan@post-dispatch.com 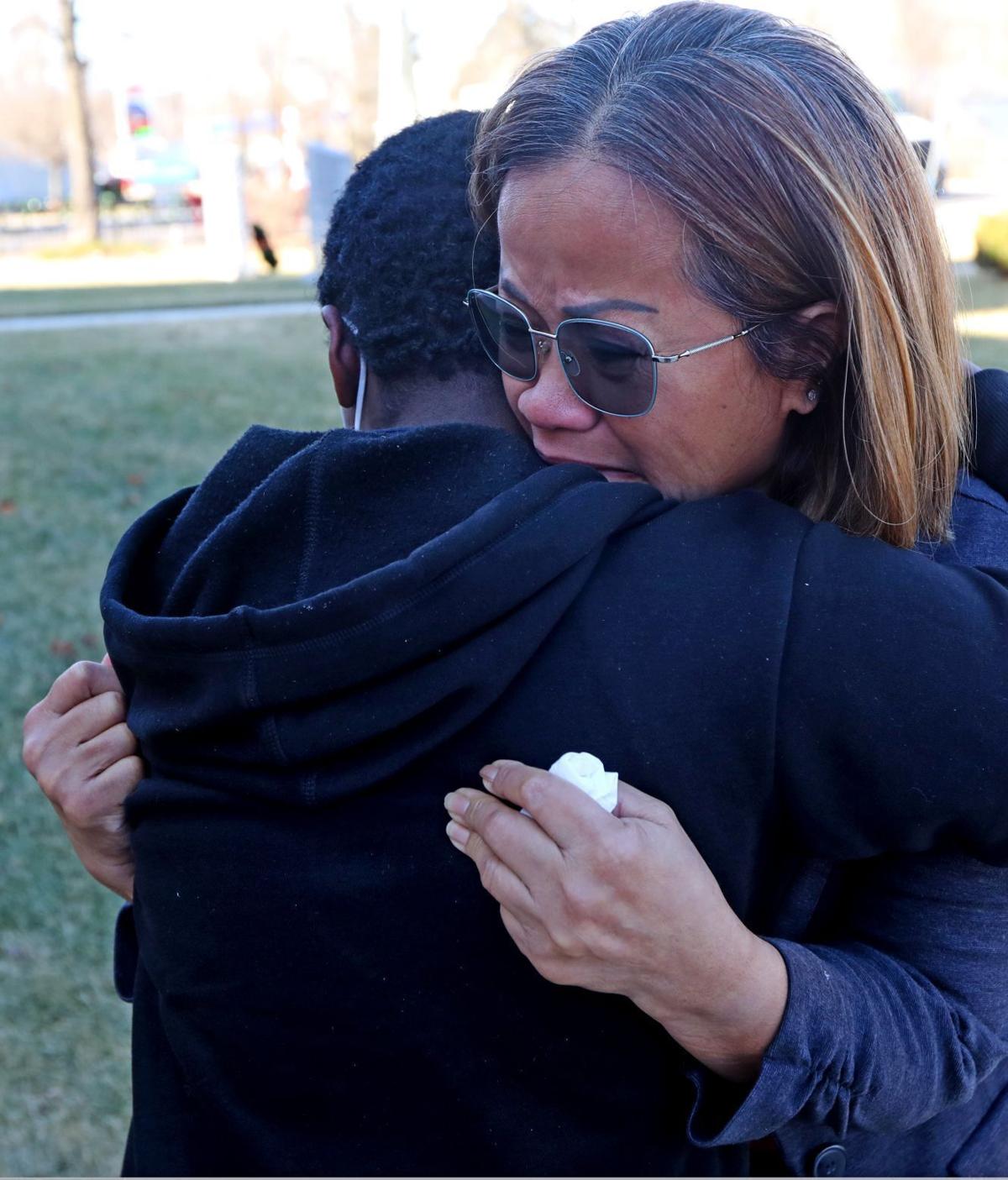 "It's all one-sided," said Eva Bruns, the mother of Justin King, who hugs King's brother Jordan, 21, after law enforcement gave testimony during a coroner's inquest into Justin King's controversial death outside the Crawford County Courthouse in Steelville on Tuesday, Jan. 11, 2022. Bruns believes someone should be charged with her son's death. Photo by Laurie Skrivan, lskrivan@post-dispatch.com

Update: This story was updated 11 a.m. Wednesday with information about the prosecutor's decision not to press charges.

STEELVILLE, Mo. — A six-person panel ruled Tuesday that the fatal shooting of a Black man at a small-town trailer park last year was justified.

A Crawford County Sheriff’s Department investigation after the shooting had found that Justin King had entered his neighbor’s home, the two had fought and the neighbor had shot King in self-defense.

But civil rights activists and King’s family members decried the investigation, calling it another example of a Black man dying in rural Missouri and not getting justice.

King, 28, died around 11:45 a.m. Nov. 3 in Bourbon, Missouri, about 75 miles southwest of St. Louis. He grew up in St. Louis but was living in Crawford County to be close to his daughter, his family said.

The Crawford County Coroner on Tuesday called a panel of six residents for a “coroner’s inquest” — an uncommon type of hearing that provides guidance to prosecutors about whether to file charges. The panel was selected by the sheriff to hear evidence and determine whether King’s death was a felony or “justifiable” in self-defense.

Prosecutors said a conflict began in the trailer park around 10:15 a.m. Nov. 3. A neighbor, Catherine Bosek, accused King of setting her dogs free from a lead in the yard. A video taken from a security camera inside King’s home around that time showed King cursing the trailer park.

Roughly 30 minutes later, another neighbor — the man accused of shooting him — dropped off a joint of marijuana to help calm King after the argument, according to video and court testimony. The two parted amicably with King holding up his hand from off-camera and saying, “Love you, brother.”

The two men eventually appear again, with the neighbor stumbling down the stairs and King staggering behind a parked car. The video did not have audio. Police said King died behind the car.

The neighbor, whom the Post-Dispatch is not naming because he has not been charged, said in a video interview that King showed up on his porch and banged on his door, threatening him. The man said he struggled to hold the door closed, but King got inside, threw a TV and broke another before heading down the hallway toward a bedroom.

The man said he grabbed his gun because he did not know whether King was armed. During a fight, the man said, he tried to shoot King in the leg. King lunged toward him, and the man said he shot King again.

The neighbor said he did not know why King became so angry that day.

“Nobody had a problem with Justin ever,” he said. “He just was not the human being on my porch.”

A medical examiner’s report said King was shot three times, once in the leg, once on the head and the fatal shot near his clavicle.

When he died, King had THC from marijuana, nicotine, caffeine, methamphetamine and amphetamines in his system, a Crawford County deputy coroner said. She added that he had a concentration of methamphetamine below a level considered by scientists to cause violent outbursts.

A blood test after the shooting showed the neighbor had a blood alcohol concentration of .065, below the legal limit of intoxication, plus THC from marijuana in his system, a Crawford County detective said.

Three residents who were near the trailer after hearing gunshots testified that King said, “I thought we were friends,” as he lay on the driveway.

“We were,” they recalled the neighbor saying.

Prosecutors made attempts to discredit the neighbors’ statements, showing clips of previous interviews some residents had done and questioning discrepancies in their statements.

After more than eight hours of evidence, it took the jurors just 20 minutes to bring back a unanimous finding that the shooting was justified.

Prosecutors left the courtroom immediately after the proceeding Tuesday and did not answer questions. On Wednesday, Crawford County prosecutor David Smith said he would not charge the neighbor.

"I fully concur with the finding of the coroner's inquest panel," he said in a statement.

“We knew the verdict before they even left,” said King’s father, John King. “It’s ridiculous to think we’re going to accept this pack of lies.”

They cited other Missouri cases involving the deaths of Black men, including Tory Sanders, 28, who died in 2017 in a jail in southeast Missouri after a white sheriff pressed his knee to his neck, and Derontae Martin, 19, who was shot inside the Madison County home of a white man with a history of making racist comments.

John King said other evidence should have been presented at the inquest, including other surveillance videos from the neighbor’s porch and fingerprints from the TVs inside the trailer. He, Gray and Chapel vowed to continue to protest and seek criminal charges.

“We’re going to get justice, and that’s the bottom line,” John King said.

The Associated Press contributed to this report.

Authorities have been searching for a suburban Chicago inmate who was allowed to leave jail to attend a family member's funeral but did not return.

Up to 15 gunshots reported during carjacking of Illinois senator

As many as 15 gunshots were reported when the husband of Illinois state Sen. Kimberly Lightford exchanged gunfire last month with carjackers who sped off in the senator’s loaner Mercedes-Benz SUV, according to a police report.

A 30-year-old woman was due in court Saturday after allegedly stabbing a dog and an 82-year-old woman to death a week ago at her Rogers Park neighborhood home, Chicago police said. Another woman, 60, was injured but survived.

Judge under fire for tossing conviction sent to small claims

A judge in western Illinois who sparked outrage when he threw out the sexual assault conviction of an 18-year-old man, saying the 148 days the man spent in jail was punishment enough, is no longer presiding over a criminal court docket.

Many of the claims and statistics related in her letter and repeated at a press conference earlier this month are misleading — and some are simply inaccurate, the ChicagoTribune has found after examining the cases highlighted by the mayor.

An off-duty Chicago police officer was arrested after he allegedly shot and wounded three people during an argument at a suburban Chicago bowling alley, authorities said.

Police were searching Friday for a man convicted of illegal gun dealing who went missing while attending his brother’s funeral in Elmhurst.

A 14-year-old boy was fatally shot on Chicago's South Side just hours after another boy the same age was shot and killed on the city's near West Side, police said Thursday.

The student loan collecting company agreed to cancel $1.7 billion in debt owed by more than 66,000 borrowers across the U.S., including Illinois.

"It's all one-sided," said Eva Bruns, left, the mother of Justin King, who stands alongside King's siblings Jeneva, center, and Jordan after law enforcement gave testimony during a coroner's inquest into Justin King's controversial death outside the Crawford County Courthouse in Steelville on Tuesday, Jan. 11, 2022. Bruns believes someone should be charged with her son's death. Photo by Laurie Skrivan, lskrivan@post-dispatch.com

"It's all one-sided," said Eva Bruns, the mother of Justin King, who hugs King's brother Jordan, 21, after law enforcement gave testimony during a coroner's inquest into Justin King's controversial death outside the Crawford County Courthouse in Steelville on Tuesday, Jan. 11, 2022. Bruns believes someone should be charged with her son's death. Photo by Laurie Skrivan, lskrivan@post-dispatch.com