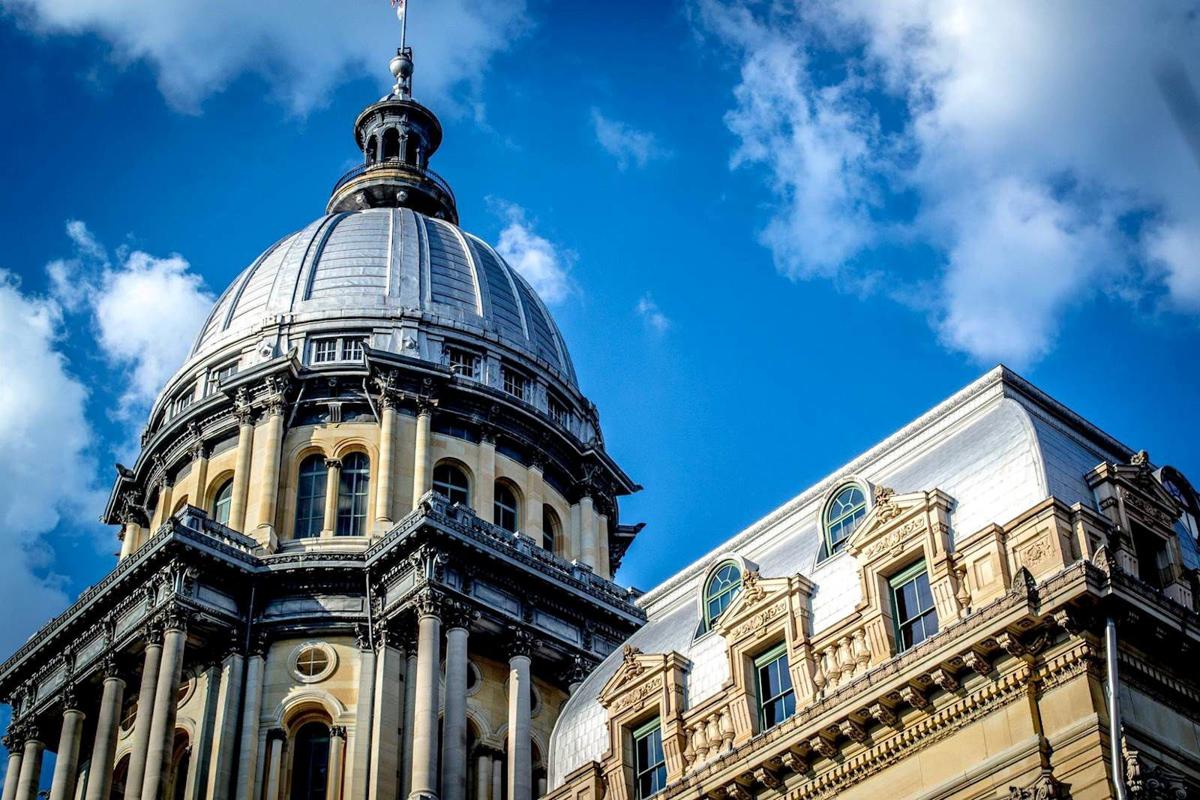 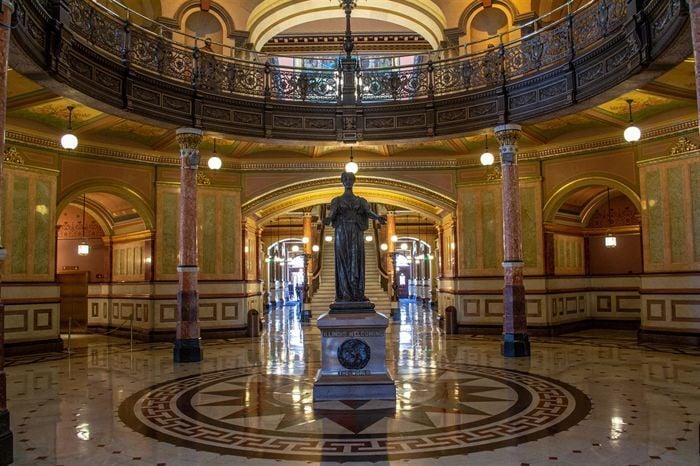 SPRINGFIELD – The Illinois Legislative Black Caucus has introduced a sweeping criminal justice omnibus bill that aims to heavily alter the state of policing in Illinois.

Sen. Elgie Sims, D-Chicago, introduced a 611-page amendment to House Bill 163 Tuesday in the state Senate, a move that would allow the bill to move during the General Assembly’s upcoming lame duck session scheduled from Jan. 8 to Jan. 13.

While the bill has been introduced on short notice, it is the result of over 100 hours of hearings held by the Black Caucus over fall and winter months as part of their legislative agenda “to end systemic racism in Illinois.” Criminal justice reform and police accountability made up the first of four pillars in that agenda.

The bill has seen intense pushback from Republican lawmakers and groups representing law enforcement. The Illinois Fraternal Order of Police called it “the worst thing to happen to our profession” and “the end of the law enforcement profession as we know it” in a statement released Tuesday.

In a Wednesday notice, the Chicago Fraternal Order of Police wrote “it might as well be a crime to be a law enforcement officer in Illinois.”

In response, the Senate Black Caucus distributed their own release Wednesday, saying “From our perspective, our communities know what they need in order to be kept safe. We come from the communities we represent. Our experiences, combined with our understanding of policy, have shaped our legislative approach, and they cannot be dismissed when it comes to determining what our communities need.”

The legislation has also received support from criminal justice reform groups such as the Illinois Justice Project and the Building a Safe Illinois Coalition.

HB163 contains several articles that would stand as their own new laws while also amending key components of state law already on the books. While most of the legislation pertains to law enforcement, there are sections devoted to altering other aspects of the criminal justice system, such as pre-trial detention, sentencing laws and prison diversion.

Here’s a look at what’s in the bill.

A number of provisions within HB163 alter use of force guidelines for officers, something that is usually a mix of state law, municipal ordinance and departmental procedure.

Many of the changes come in response to the death of George Floyd and Breonna Taylor at the hands of police and other high-profile cases that resulted in massive protests across the country over the summer. Many restrictions to use-of-force in the bill reflect testimonies from hearings held in the fall regarding how officers used force in response to those protests.

Article 3 of HB163, referred to in the legislation as the “Statewide Use of Force Standardization Act,” establishes guidelines for use of force that all law enforcement agencies in Illinois would be required to follow starting Jan. 1, 2022.

Law enforcement must identify themselves as peace officers and warn that deadly force will be used before use of force. Officers are not allowed to use force on a fleeing suspect unless that person has just harmed or tried to harm another person, is in possession of a deadly weapon, is considered an active threat to human life or is unable to be apprehended safely at another date.

In general terms, HB163 mandates peace officers “use deadly force only when reasonably necessary in defense of human life.” It establishes that the legal authority to use physical force “is a serious responsibility” that should be used by officers “with respect for human rights and dignity and for the sanctity of ever human life.”

The bill would also amend the acceptable forms of force, banning chokeholds and any restraints on an individual above their shoulders that can potentially limit their ability to breathe.

Officers may not use force as punishment or retaliation, cannot use non-lethal projectiles to target a person’s head, groin or back or fire them indiscriminately into a crowd. Officers are also prevented from using tear gas or pepper spray without first issuing a warning and allowing “sufficient time and space” to follow the order.

HB163 will require officers to render medical aid to an injured person, regardless of whether or not they were hurt by an officer’s use of force or other means. It also requires officers to prevent another officer’s illegal use of force in their presence regardless of the chain of command and requires that they report the offending officer, with provisions that make it an offense to retaliate against any officer who files a report.

The bill also requires that any time a person dies in police custody or as a result of an officer’s use of force, the associated law enforcement agency must investigate and file a complete report in writing to the Illinois Attorney General within 30 days.

The AG is then required to make these reports publicly available on their website and issue an annual report on information and trends in use-of-force and in-custody deaths.

Article 5 of HB163, referred to as the “Police Integrity and Accountability Act,” makes police officers individually liable for lawsuits if they violate the rights of a person guaranteed under the Illinois Constitution. The law explicitly states that qualified immunity is not a defense to liability.

Qualified immunity is not a law or statute, but a legal doctrine established by the U.S. Supreme Court which grants government officials immunity from civil suits in the course of their duties. It’s most often used in cases of alleged police misconduct or brutality and in some cases shields officers who have been found to have violated an individual’s constitutional rights from being sued by that person.

The Police Integrity and Accountability Act would remove that protection under Illinois law for acts that violate rights granted in the Illinois Constitution.

HB163 would institute changes to the Illinois Public Labor Relations Act regarding the collective bargaining powers of unions, specifically unions for law enforcement.

Under the new changes, employers, which would refer to municipal governments at the county or city level, would not be required to negotiate with unions regarding the discipline or discharge of law enforcement. Existing contracts between law enforcement unions and cities that include provisions regarding discipline and termination will have those sections voided when those contracts are extended or renegotiated.

No agreement that applies to police officers, including the Illinois State Police, can include a provision unrelated to wages or benefits.

HB 163 will eliminate cash bail as a requirement for pretrial release. These sections of the bill draw from legislation previously introduced by Chicago Democrats Sen. Robert Peters and Rep. Justin Slaughter called the Pretrial Fairness Act.

The section of HB163 known as the “Quasi-criminal and Misdemeanor Pretrial Release Act” would eliminate cash bail requirements for people charged with criminal offenses and misdemeanors and replace it with a uniform set of pretrial release conditions established by the Illinois Supreme Court.

All mentions of cash bail will be struck from Illinois statutes and replaced with pretrial release conditions. Proponents of eliminating cash bail have long argued it targets poor residents, especially those that are Black or Latino, and that the act of cash bail has contributed to the mass incarceration of these groups for otherwise minor crimes.

Outside of what has already been mentioned, the bill includes changes to how the census is conducted in Illinois regarding prisoner populations, state recordkeeping laws, sentencing guidelines and more.

Several unfunded mandates that require dozens of hours of additional training for officers and mandatory body cameras for all departments are also included in the legislation.

The General Assembly has six days to debate and vote on HB163 during the lame duck session from Jan. 8-13 before the 102nd General Assembly with new leadership and new legislators is inaugurated.

DES MOINES — With reports of armed protests possible, steps are being taken to ensure the Iowa State Capitol remains a safe place in the comin…

DES MOINES — State lawmakers returned to the Iowa Capitol on Monday, with the state still in the throes of the COVID-19 pandemic, to perform t…

Madigan suspends speaker campaign: ‘This is not a withdrawal’

SPRINGFIELD – House Speaker Michael Madigan announced he would suspend his campaign for House Speaker of the 102nd General Assembly on Monday,…

DES MOINES — Cindy Axne, the lone Democrat in Iowa’s Congressional delegation, cast the lone vote from the state in favor of impeaching Republ…

It will be up to the rank-and-file to determine if Iowa Republicans are moving on from Donald Trump, GOP Chairman Jeff Kaufmann said Saturday.