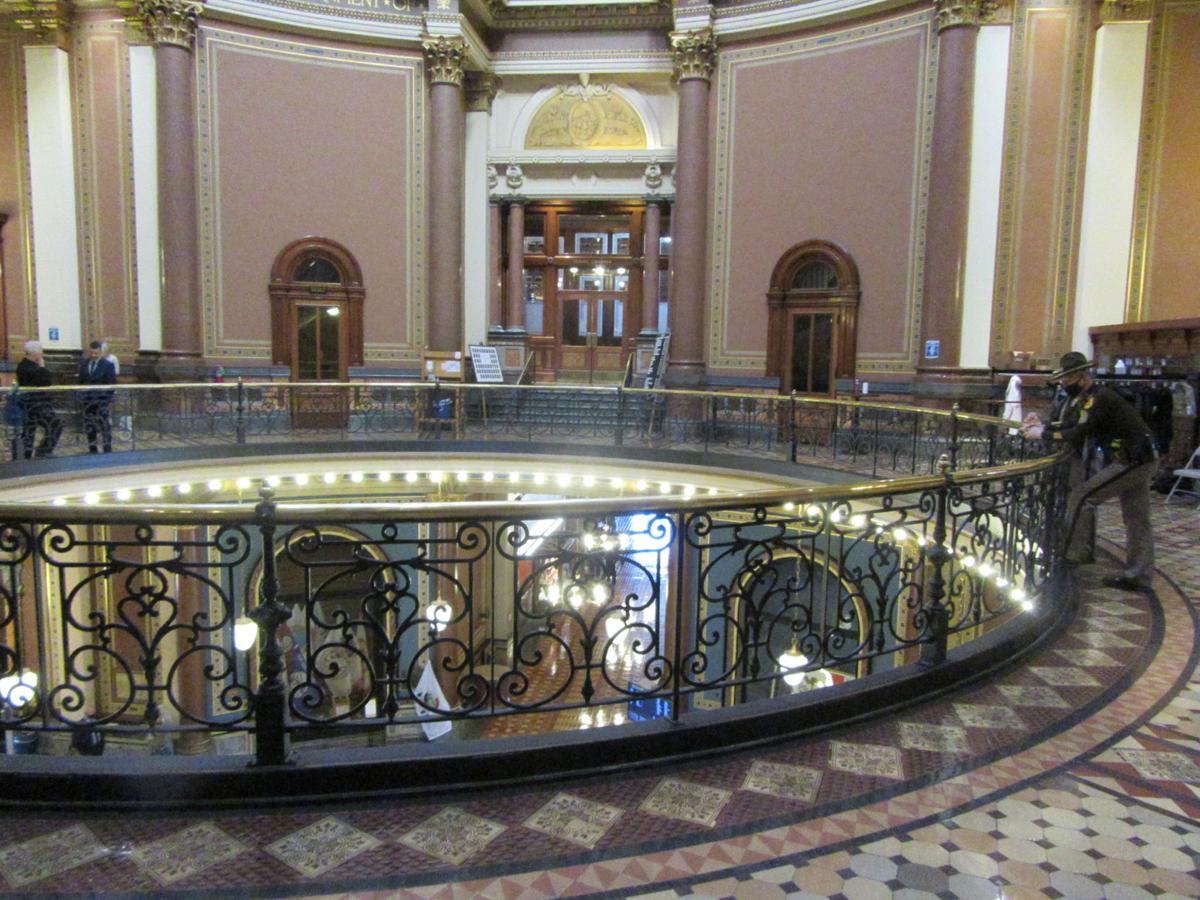 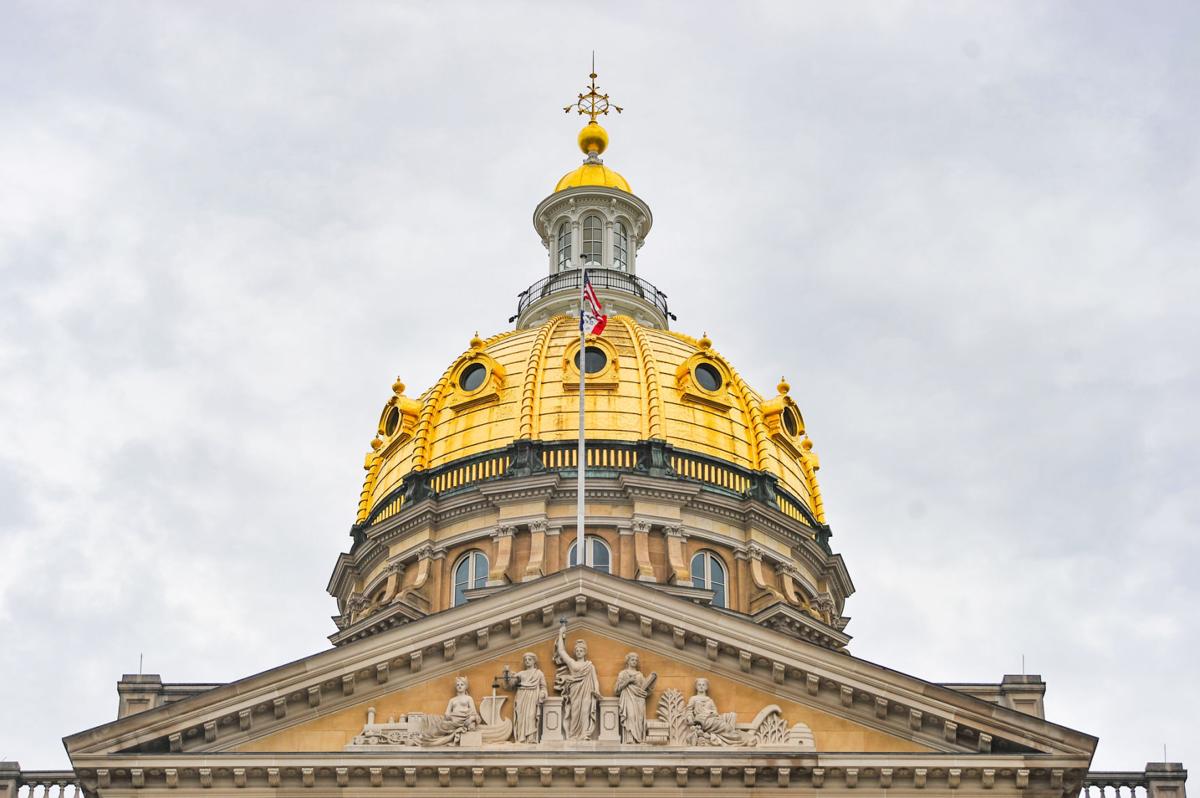 A roundup of Capitol and state government news items of interest for Wednesday:

QUIET AT CAPITOL: There were no significant protests at the Iowa State Capitol on Wednesday, despite warnings in a federal intelligence memo.

The FBI in a memo had warned extremist groups were planning armed protests at all 50 state capitals and in Washington, D.C., in the days leading up to President Joe Biden’s inauguration Wednesday, according to the Associated Press.

The memo was reported shortly after the Jan. 6 attacks on the U.S. Capitol by supporters of former President Donald Trump as they attempted to stop Congress from certifying the presidential election results. The attacks left five dead.

No significant protests broke out Wednesday at the Iowa State Capitol. A lone tractor, adorned with Trump flags, was seen driving near the Capitol on Wednesday morning, roughly around the same time Biden, in the nation’s capital, was delivering his inaugural address.

No one won Tuesday’s Mega Millions drawing so the top prize climbed to an estimated $970 million for Friday’s drawing, which would be a $716.3 million lump-sum cash option. That is the second-largest prize in the history of the game and the third-largest ever U.S. jackpot.

Iowa Lottery officials say more than $2 million worth of Mega Millions tickets were sold in Iowa for Tuesday’s drawing and a total of 35,826 Iowans won prizes.

Friday’s drawing will be the 37th since the Mega Millions jackpot was last won on Sept. 15 with a ticket purchased in Wisconsin — making it the game’s longest jackpot roll.

Odds of winning the jackpot are about one in 302.6 million.

The jackpot for Wednesday night’s Powerball drawing stood at an estimated $730 million, which carried a $546 million lump-sum option for matching five numbers and the Powerball in the 9:59 p.m. drawing. That was the fourth-largest prize in Powerball history and the fifth-largest U.S. jackpot.

This week marked the first time both jackpots simultaneously topped the $700 million mark.

The record for a lottery prize remains the Powerball jackpot of nearly $1.59 billion that was split in January 2016 by winners in California, Florida and Tennessee.

Sen. Zach Whiting, R-Spirit Lake, chairman of the full committee, said the concepts in Senate Study Bills 1033 and 1034 are works in progress that he hopes can be perfected into ideas that become law to help solve Iowa’s workforce shortage problem.

Under the bills, new residents who work at least 20 hours a week and establish a homestead in Iowa would be eligible to have their initial income and property tax liabilities reduced by way of a 20 percent yearly rebate over a five-year span.

“It’s just one idea,” Whiting told the virtual subcommittee meeting. “It’s not the silver bullet to solve the workforce problem. Maybe this is one piece of that conversation.”

Representatives from business, civic, labor and other groups applauded legislative efforts to attract new residents to live and work in Iowa as the state digs its way out of the economic downturn caused by COVID-19 that has closed businesses, driven up joblessness and exacerbated a shortage of skilled workers.

Sen. Pam Jochum, D-Dubuque, said the goals of the proposals were worthy but left a lot of unanswered questions that needed to be addressed.

The income tax rebate would apply to the tax year beginning Jan. 1, 2022, while the homestead tax credit would cover property acquired after Jan. 1 but before the end of the base year for which the credit was being requested.

SPACE FORCE: Iowa’s military code would be updated to include service in the Coast Guard and the newly created Space Force by HSB 43, which was taken up by a House Veterans Affairs subcommittee Wednesday.

The bill is amended to include federal active duty in the Coast Guard. It also extends leave of absence for public employees called to duty in the Space Force, which was created in October 2020 to organize, train and equip space forces to protect the U.S. and allied interests in space.

SPEED KILLS: Drivers who directly or indirectly cause the death of another while driving at least 25 mph over the posted speed limit would commit a Class C felony under legislation approved by a House Public Safety subcommittee.

Law enforcement officials told the subcommittee that along with a dramatic increase in people driving in excess of 100 mph, 69 people died on Iowa roads last year in speed-related crashes.

A driver convicted under HSB 5 could spend up to 10 years in prison.

ASSAULT BY LASER: HSB 63 would add the use of a laser to the definition of assault in the Iowa Code.

The issues arose after law enforcement and others reported temporary blindness after lasers emitting visible light was shone in their eyes, said Rep. Gary Worthan, R-Storm Lake, who chaired a Public Safety subcommittee that advanced the bill Wednesday.

Courts in other states have ruled that “assault by laser” did not fit the definition of assault.

The definition does not apply to law enforcement who use a laser in their official duties, to health care professionals and others authorized to use a laser, and anyone using a laser to play tag, paintball and similar games.

Assault by laser would be a simple misdemeanor, aggravated misdemeanor, serious misdemeanor, Class D or Class C felony depending upon the circumstances of the offense.

IMPACT PLAYER: The National Biodiesel Board has recognized Gov. Kim Reynolds with its Impact Award for her commitment to advancing renewable fuels like biodiesel.

She has been a “dedicated and articulate advocate” for biodiesel and renewable diesel, the NBB said. She has fought for a stronger, more reliable Renewable Fuel Standard.

In 2019, Reynolds made strides by signing an executive order requiring all new state-owned diesel-powered vehicles to be compatible with the use of at least 20 percent biodiesel. She supported growth through the expansion of renewable fuel infrastructure for biodiesel, including installation of biodiesel pumps at retail fuel stations in Iowa.

What do we know about the Omicron variant?

DES MOINES — Sometime next year, Iowans will have the option of keeping their state-issued driver’s license on their smartphones and not just …

If a company rejects an applicant because of their criminal record, it has to prove the rejection was because a person’s crime has a “substantial relationship” to the job.

Worker shortages are everywhere. Iowa schools are no exception.

DES MOINES — Worker shortages are impacting nearly every workforce sector, and schools have not been immune, education officials say.

Behind a window with a “Save the Byron Nuclear Plant” sign taped to the glass, Ricardo Montoya Picazo listened to a father of three wonder aloud if he would still be able to support his children in a few weeks.